So you KNOW who's coming to dinner, right?  I've known for sure since about 2:00 am when the downpour began.   Friends Nick and Terry Russell are in California, having just come from rainy Oregon and they are bringing the weather with them.  The rain seems to follow Nick everywhere!!  In this case, it's a good thing, since it's the end of October and I think this is our second rain of the season.  I guess I can turn my sprinklers off now!!

It was Magic Kingdom night at the Elks ... time to endure the onslaught of fanatic Bingo players.  Not a big crowd last night, but a rowdy one to say the least.  "Don't Touch My Cards" returned and I can only assume he didn't like my looks.  The Castle Lawyer touched and counted ALL his cards without a peep from him.  You just never know what the reaction will be from night to night.

We give out little red tickets for a drawing twice a night, the prize being pull tabs.  There are five little tabs you pull off (kind of like lottery scratchers) where I think the maximum you can win is $10 from a box of 10,000 cards.  Those aren't very good odds, but you would think it was worth a couple hundred at least, by the actions of the players.

Even though I'm constantly saying "hang on to those red tickets" ... not only do they drop them, but leave them on the tables for someone to steal.  Last night one lady took her receipt and ticket, putting it in her left hand under the bingo cards, then proceeded to accuse me LOUDLY of not giving her a red ticket.  "It's with your receipt" I said.  NO IT'S NOT!!  GIVE ME A TICKET!!  Yes, she was screaming rather loudly when I caught a glimpse of it in her hand.  "It's in your hand" ... NO IT'S NOT as she stuck her other hand out at me.  "Your OTHER HAND" I said quietly ... "look in your other hand".  She turned around and stomped away with no apologies of any kind.  So WHY do I volunteer for this job??

The rest of the night went fairly smoothly as the Castle Lawyer manned the cash box and I watched three innings of the World Series in the back room.  What a game THAT was!!  As soon as I got home I turned the TV on and it was still going!!  FINALLY Kansas City got a run and won the first game.

The first time the Giants won the World Series when I was a season ticket holder, my friend and I followed them around the country to all the games.  I have to say Kansas City fans were a fun loving group who made sure we were involved in all their antics.  I couldn't be happier for them!!

As I checked my email, I unexpected received my estimates from the landscape guy.  Amazingly, they were half of what I thought.  The lighting of course is the most expensive, but I'm getting four times what the last guy put in ... LED's no less ... at about the same price.  Hopefully he will be able to light up my life before I leave for Indio in January.  Everything else will have to wait.  When I learned the sprinklers run twice as long (thank you Lynn) and will jump my PGE bill through the roof, that project got the red pencil.  I'll just have to be more creative and remove the back lawn.

In the middle of all that, I finished stitching together ANOTHER quilt called Hawaiian Waters.  This one will probably be donated to the local Veterans Organization to be raffled off for their fund raiser next year. 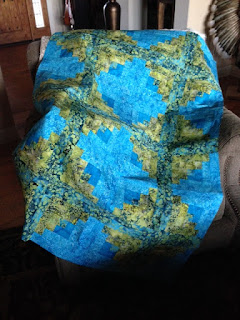 Time to get my act together ... I've got lots of cleaning to do before company comes, and I need to dig a small hole in the back yard, just in case!!  You will be surprised to hear that Nick is going to help me with some electrical work.  Scary you say??  Not at all.  We've discussed it before at length and he really knows his stuff.  Besides, Miss Terry will be standing by with a Mac The Fire Guy fire extinguisher!!

Posted by Nancy Kissack at 7:35 AM