My baby boy is back home!!  Actually, it's a girl, but her name is Jonathan.  It's a short story .. I have probably mentioned that I raised exotic birds for quite a few years ... cockatoos, parrots, sun conures, lorikeets and love birds to name a few.  It seems they liked the 80 x 200 foot aviary in my back yard.

Conditions have to be just perfect to get these guys to lay eggs.  Once they hatch and have been fed by mom for a week or so, you pull the babies and hand feed them (a warm special formula fed with a baby spoon) for three or four months, before they go to their forever families.  I say forever because these yellow head parrots in particular live to be about 75 years old.  Jonathan just turned 40.  Hard to believe, right??  If his cage doesn't fall off any more counter tops, he will outlive me!! 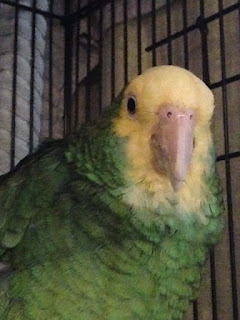 When born, there's no way to tell whether they are male or female, so I named this one Jonathan.  He's quite vocal and says pretty boy, what cha doing, I love you, Jonathan, disco and a few more.  The plan was to use him for breeding, which meant surgical sexing by a vet at about two years old.  Come to find out, Jonathan is a girl.  Nowadays they use ultrasound, although owning exotic birds is pretty much a thing of the past.  The aviary business went broke, but I kept Jonathan as I was still hand feeding him. 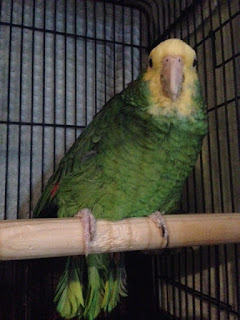 It's going to be a little different having him back home from his two year visit with my friends while I traveled out of the country.  Just before taking off to Alaska, I discovered I had completely forgotten to get any Vet papers for him, so he moved in with a friend.  Now I'm VERY happy to have him back home.

Jon went through a long stage of illness in his younger life and is pretty lucky to be alive.  I gave him many MANY shots at all hours of the day and night and created a special diet later used by Davis Veterinary School.  Traveling puts them under stress, not to mention close contact with humans from whom they can contract a couple of killer sicknesses.  Some of the bigger birds travel well, but I worry about Jon.  Did I mention they are a pain in the butt??  Luckily he's a pain I love!!  Yes, that IS a light beside his cage to keep him warm at night and he gets waited on hand and foot!! 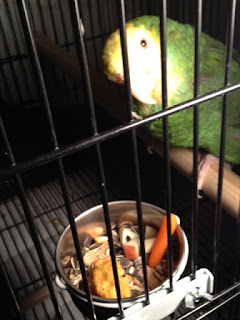 One of the things I can actually bake without any risk of catastrophe is bird biscuits.  Exotics require a lot of vitamins from "orange" things, like sweet potatoes, which he refuses to eat, so I include that and lots of other good stuff in his morning biscuit.  He'll eat carrots, sunflower seeds, hard boiled eggs, apples, bananas for which he needs a napkin (terribly messy) along with an occasional treat of Ritz cracker.  Yup he's spoiled!!!

Now if I can only figure out how to attach his cage to the inside of my motorhome so it won't fall off when going through a round-de-round!!  That was a disaster I don't want to repeat!!  I think I can strap it down to the table, but that means no more use of the table.  Oh well, it's a small sacrifice!!

Jonathan is calling as I type ... it's time for disco dancing!  We both yell disco as he bobs up and down moving his head and one foot!!  I'm so glad he's home!!

Posted by Nancy Kissack at 6:30 AM