No matter how you pronounce it, Bonsai is an interesting hobby that I'm learning more about.  This little tree, actually a shrub I bought in Albuquerque New Mexico, probably isn't the real thing.  I can tell by the price I paid for it ... cheap.  The amazing part is that I have been able to keep it alive for over one year, with absolutely no clue what I was doing.

After a few months when I thought it might croak, I put it outside in the garden where the sprinklers would hit it and walked away.  It LOVED the cold nights and began to thrive!  Okay then .... maybe I can do this after all!  I have since learned that very few plants can be INSIDE bonsai.  This is an OUTSIDE hobby!! 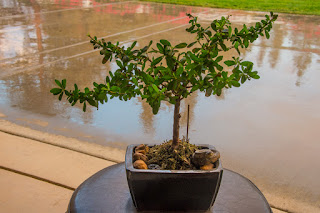 It's all in the shaping and pruning, not to mention fertilizing and watering.  That's why I bought the book Bonsai Workshop.  It tells you what plants will work, and exactly how to keep them alive.  Unfortunately for me, I'm learning this a little too late.  Many of these little trees are over 30 years old, so I doubt I will ever be able to produce something like this beauty.   On the other hand, many just LOOK that old because of the meticulous pruning. 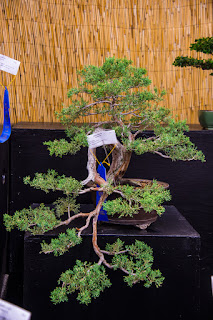 On the way home Thursday, I stopped in at Nee Hai Bonsai in Fresno, hoping to pick up some tools, maybe a pot, some planting medium and a few tips.  My plan was to find one little juniper I could add to my collection of one.

The gentleman wasn't very helpful.   I told him I had been reading about bonsai for some time and really wanted to get started.  His response was "go to a nursery and buy a cheap plant".  That was it!! No tips, no instructions on how to use tools, no plant suggestions ... just GO.  Maybe he was having a bad day I thought ... so I hung around a little longer until a young man came in, asking the same questions.  Finally, he suggested a staked juniper and the name of a nursery.  I left empty handed and rather disappointed.

I quickly became even more discouraged when I got to the nursery and there were no staked junipers to be found, not that I knew what that was anyway.  Back home, I read and reread my book, making a list of acceptable plants to hone my skills at chopping and hacking.  I might even find one or two at (shhhhh don't tell anyone) Lowes or Home Depot.  The gentleman at the store said I'd probably kill it anyway .....

I finally got up the nerve to trim and shape my little beauty a little ... not with the clippers that are suggested, but with my handy dandy kitchen scissors.  If I knew what type of plant this was, I could look it up in the book, but alas I just tried to follow the "rules", trimming just a little at a time.  It definitely looks better than before.  Course the little ceramic rattlesnake at the base isn't quite Bonsai material ...... but I like the element of surprise!! 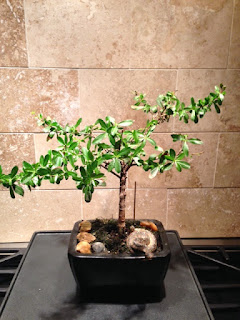 The sunrise yesterday was gorgeous with puffy clouds after a night of rain.  I'm glad I wasn't traveling south, because they had so much rain on dry soil that nothing soaked in, causing flooding and landslides that closed I-5 to Los Angeles. 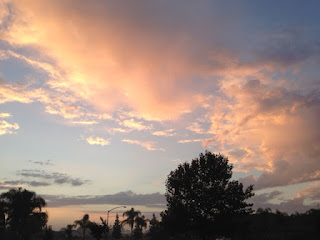 Even worse, Hwy 58 from Mojave to Barstow, which I travel often, had flash floods and mudslides stranding loads of cars and trucks in two feet or more of mud and water.  There was a video on Facebook that was just crazy, showing cars being tossed around like plastic toys in a river of mud.  Hopefully with a good soaking, that won't be a problem any more, unless of course El Nino finally shows up.  They said a couple of years ago that we would be washed away by El Nino, but it never happened.  Maybe this is the year!!

The rainbow outside my window after the rain was pretty spectacular.  There's actually TWO rainbows, but the second is barely visible in the picture.  Yay, I get to turn my sprinklers off for few days!! 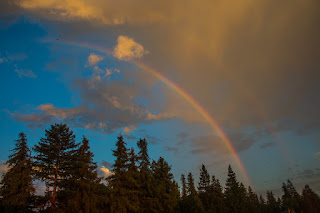 I'm headed North today in search of the elusive staked juniper and possibly a rosemary plant.   Rosemary can take a lot of abuse and will grow INSIDE!!  That way when I travel, I don't have to constantly set them outside the rig.  Here's another tip ... set them by an OPEN window.  The glass takes away too much of what the plants need from the sun.

Posted by Nancy Kissack at 7:42 AM