You know how it is when you get older ... your parts wear out and need to be replaced.  Like this old rusty car in the Arizona dessert, some of my engine parts need to be repaired.  When that little check engine light comes on, you better get yourself to the nearest hospital for a checkup. 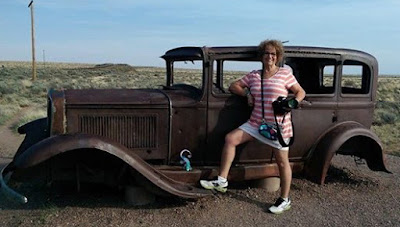 It seems my controllers are all out of whack, not allowing enough fuel to my engine.  It's been running pretty rough for the last year.  Since I'm always running ten degrees hotter than everyone else, the doctor thought the gizzy controlling THAT feature may need some adjustment too.  Gosh it sucks to get old!!!

By now you probably all know I'm talking about my 2005 Chevy Silverado truck, right??  Actually I could probably use a tuneup too, but yesterday, it was my truck that was feeling under the weather.  It hasn't been serviced in a year, mostly because I'm always gone.  Last time it was a hefty $1500 which included a front bearing assembly ... kind of like a knee replacement.

This time the check engine light resulted in a glow plug code.  Ladies, have you seen that Cold Engine Start switch on your RV or truck?  Diesel engines don't have spark plugs like gas engines ... they rely on compression to ignite the fuel.  When the air is cold, that won't occur, so this little glow plug lights up and provides the heat for combustion to happen.  That's about the extent of my diesel engine knowledge!!  I really wish my dad had included me when it came to overhauling equipment.  I could save myself a LOT of money.  At any rate, that little glow plug module quit working to the tune of $371.

The next problem, running really rough, turns out to be the fuel pressure regulator.  If the engine isn't getting enough fuel, it runs terrible and will eventually leave me stranded somewhere.  Okay, I admit I cheated.  I called Dan Chance about this one!!  The BAD news is that all this will cost me another $1500, once you throw in an oil change and a fuel filter. 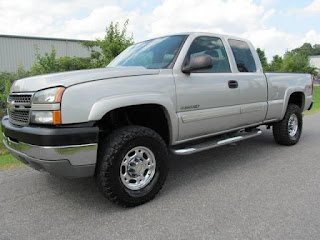 With only 97,000 miles on her, she's only a third of the way through her life.  I actually checked on the prices of new ones and almost had a heart attack.  That definitely would have put ME in the hospital.  $65K for your run-of-the-mill Chevy truck (this one cost me $40K).  I suppose since I don't have horses I probably don't need a truck, but it will come in pretty handy when I pack that 28 foot horse trailer for my move!!!

Sell it you say?  Not a chance.  I'm a truck girl from waaaaay back.  I love my Jeep for towing behind the rig, but for freeway driving, it's not my choice.  I'd much rather feel the safety of my BIG CHEVY TRUCK!!!!!

Posted by Nancy Kissack at 7:30 AM