An Evening In Hawaii!!

The problem is that a stay in Hawaii is usually accompanied by Mai Tais, right?  Now I'm not really fond of alcohol, in fact I rarely partake.  The trouble with that is when you DO have a couple of drinks, your memory goes right up in smoke!! 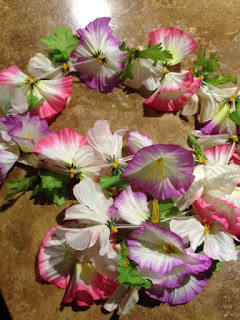 I spent a little more time in the yard yesterday, along with a couple of hours cleaning and decluttering.  I would probably be much better at this if all these things didn't have so many memories attached to them.  Like the jars from around the world, including Costa Rica and Cozumel ..... 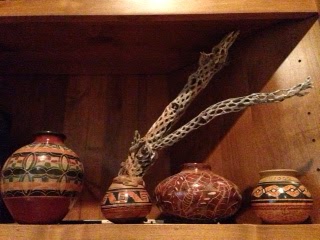 The Polynesian feather dance rattles I found at an obscure little store at the end of the road on Kauai and of course my horse hair bowl from the Grand Canyon and the last pair of handmade moccasins from an elderly woman on Unimak Island in the Bering Sea, just to name a few.  Maybe I can donate all this amazing stuff to a museum.  I'd sure hate to see it end up at Goodwill!! 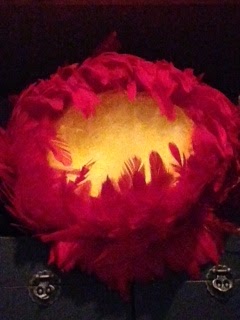 So back to the Mai Tais ... I went out to our little County Park Lake Yosemite, where all the sprinklers have been shut off and hundreds of trees are dead and dying.  There's one grassy spot that continues to be watered.  What a shame our politicians throw our tax dollars away on parties for their re-election while the trees at the park die!!

At the end of the road is Rotary Park II, one of two new sections they built because three weren't enough.  The Merced Arts Council was having this Luau as a fundraiser to help continue their work, whatever that might be, since I'm not at all familiar with them.  I don't get involved in things like this ... I leave it to the big wigs and mucky mucks in town.  My Elks Lodge Bingo group purchased tickets for ten however, so I went along to fill a seat.

I took my camera with the intention of getting photos of a beautiful sunset.  The clouds didn't cooperate ... they dissipated into the breeze.  Still, it was rather beautiful and peaceful. 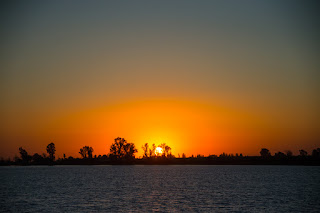 There is still a little water in the lake with the inlet completely bone dry.  It's October already ... could we have some rain pretty please? 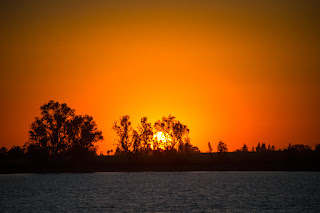 By now it was dark dark and the line to the Mai Tais was 30 people long.  These big wigs really know how to drink!!  There was a huge barbecue manned by our County Sheriff (an Elks member) and hundreds of people, most from big businesses in town.  Who knew this would be such a big deal?

The food was wonderful ... pulled pork, bbq chicken, cole slaw with pineapple and Hawaiian macaroni salad.  In Hawaii, all macaroni salad has potatoes and vice versa!  When he said to head to the buffet line, the Castle Lawyer and I jumped right up.  I wish I had a picture of the food to show you, but I completely forgot ... those darn Mai Tais!!  By the time we finished our dinner, the line was still 50 people long and they were running short of food.  Be first in line I tell you .....

Wondering why this picture is so blurry?  Because that second Mai Tai messed up my camera.  No matter how hard I tried, I couldn't hold it still enough to get a clear picture.  If I had known there was going to be entertainment, I would have brought my flash.  I'm sure the guys would have liked to see those four cute young girls in their coconut tops and grass skirts!! 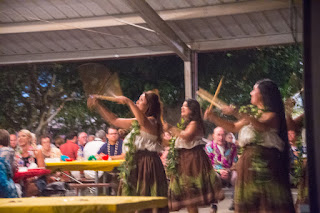 With the dancing entertainment over, the auction began with the words "this is not your local make-a-deal auction ... this is a FUNDRAISER and we need you to bid HIGH"!!  With only five items up for sale, mostly dinners for 25-50 people, I didn't see any need to stick around.  I don't know that many people to invite.  No doubt the mucky mucks would have outbid me anyway.  These auctions carry bragging rights!

Now if I could just find my car!!  The Castle Lawyer was smart, she parked on the end.  I used my phone flashlight to light the path so she wouldn't fall.  Then I tried to find MY car.  Too bad I didn't count the rows when I arrived.  Fifteen minutes of walking up one row and down another, clicking my car keys so everyone would know my car was unlocked, I finally saw a hint of light as my headlights were blinding everyone still sitting in the patio of the building.  No worries, it was dark so they couldn't tell it was me.

Lucky for me, the puppies let me sleep in until 6:00 this morning.  No hangover, a good thing since I have lots to get done today!!  With good weather expected for the next few days, I need to start waxing the rig.

Anyone want a fake plastic lei??  I have one I'll sell you CHEAP!!