If you lived in MY house, the sight of my new smaller crock pot would bring fear to your heart.  OH NO!!  Another gadget she'll use to try and produce something edible.  The first one was too small ... the second one was WAY too big .... so maybe this medium sized one will be JUST RIGHT!!

For some reason, I tend to think it's not me OR the crockpot ... it's the recipes I chose to COOK in the crockpot.  Ok, I admit ... yesterday, it was me ... ALL ME!!  I took one of those packets of rice and herbs that I purchased at the Farmers Market in Oregon and matched it up with a recipe from a book ... kinda sorta.  The packet called for three cups of water, but that seemed excessive, so I used TWO cups, a can of soup and added some chicken I browned.  Sounds good, right???  Chicken and rice!

Well for heavens sake ... I read the recipe wrong.  It said to cook for four hours on low ... I set it up for four hours on high.  Luckily I was around to check it occasionally and give it a good stir as the rice mixture became glue on the bottom of the pot.  It smelled wonderful until it got a little TOO brown on the bottom.   I added a little more water and kept stirring.  In two hours, I knew it wasn't going to go the distance of FOUR ... so I turned it off.  Dinner was served!!

It actually tasted wonderful ... the chicken was nice, kind of tender ... the rice was good, except for all those hard little bits that didn't get cooked!!  Well I'm NOT wasting this, at least it isn't burned black, and I chowed down.  Too bad I now have enough to feed a family of four for two days!!  Fear the pot my friends .... FEAR THE POT!!!  One of these days ONE of these recipes HAS to work!! 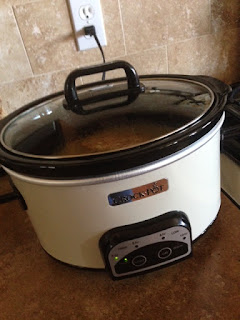 While dinner was cooking, I got out Jonathan's travel cage and set it up, washing everything from top to bottom.  I have another larger cage for him to live in, but for whatever reason, it was minus the perch.  Off to Home Depot I went to get a dowel.  Different birds use different size perches.  Too small and they can't hang on ... too big and you have the same problem.  It's hard to find one "just right".

After looking over the entire store, I finally found some long pieces back with the molding.  Since I had to cut my own, I figured I would have enough to fix any mistakes I might make.  Sure enough, right off the bat, I cut it too short.  I'm sure I measured right, but forgot to account for the slots on each end.

I do have a saw, so cutting it into pieces wasn't a problem ... I can do that pretty well.  It was those slots that dogged me for an hour.  It was hard to get the saw started, hard to keep it straight and make the slots on each end go the exact same direction.  The first piece bombed out ... it just fell on the floor of the cage.  My second try wasn't exactly pretty, but fits perfectly!!  Why is this so much easier than cooking?? 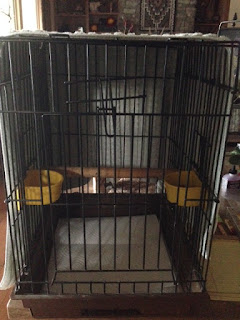 With a couple bags of seed, some muffin mix and sweet potatoes, I'm ready for my new tenant.  He's been gone entirely TOO long.  The muffin mix?  Lucky for Jon, those are so simple even I can make the muffins he needs to keep him healthy.  Birds need lots of orange vegetables for vitamins ... which they usually refuse to eat, so mixing sweet potatoes in a corn muffin mix, along with peanuts and sunflower seeds, fits the bill.  He loves it!! 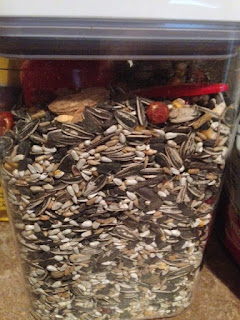 My list of things to get done is mounting ... my truck engine light came on, I discovered some outside window sills that need painting, it's time to change my AC filters and declutter the house.  I think I finally learned the lesson of less is better.  All those neat things I purchased on this last trip need a place to live ... but it's already crowded here, even if there is only one human in the house.  Time to make a pile of donations!!

Now where are all those crockpot recipes ... there must be a good one somewhere!!!