Okay Mother Nature ..... CEASE AND DESIST!!  Although it's a comfortable 65 outside this morning on the patio, it was a MOTHER yesterday.  That 105 degree day sent my air conditioner into a tizzy.  Even though I have my thermostat set at 85 degrees in the house, it turned on at 11:00 when it hit 100 and ran all day.

I tried turning it off once while my fan blasted me with convection oven breezes, but I just couldn't stand it.  Cooper was panting with his tongue hanging out, so I turned it back down to 81 degrees.  This morning's check revealed that my usage tripled yesterday.  I should have been looking into solar six months ago!!

Here's the latest I've learned.  Those little micro inverters work really well when they work, but they seem to have a high replacement rate.  Besides that, they are much more expensive according to the bids I've been getting.  The other news is that solar is exempt from property tax, or so they tell me. 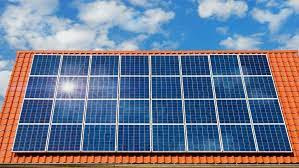 It's all about your usage of course, so I finally bit the bullet and began to delve into the numbers.  What about when I'm gone someone asked.  It appears I have used much more in the summer when I'm not here to turn the sprinklers off that the gardeners turn on.  That 30 minutes per station adds up to my pump running 6 hours a day.  YIKES!!  I've told them not to touch the control, I've even locked it up tight.  They took a screwdriver to it and turned the water up yet again.  Maybe I can add a mouse trap to the door.
The winter usage is low, offsetting the high summer.  Turns out that averages out to my normal usage when I'm here.  I know, more than you OR I ever wanted to know!  So now I'm counting kilowatt hours like a pro!!
I suppose I could NOT get solar and just pay for diesel ....... did I say that???
The Reno Rodeo Finals were on yesterday, so I did spend a bit of time on the couch.  Not one to sit and do nothing because it seems to activate the appetite of an elephant, I worked on the binding for this quilt until it was done.  This is another of those get-rid-of-the-scraps quilts.
It's not my favorite, but someone will love it.  Anything I don't want to keep, I donate to the local Quilt Guild that gives high school graduating foster kids quilts for their dorm room when they sign up for college.  This one will be a good color for the boys!! 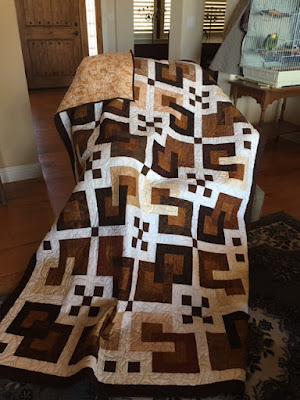 And just like that ... I started on the next quilt after carrying Cooper outside.  Too bad I was too late.  He threw up on the carpet before I could whisk him out the door.  Poor baby ... and of course the concrete is screaming hot on his feeties, so I carried him back in.  I was then stuck on the couch for an hour consoling him before it was let's play the ball game.  It's like having a five year old for thirteen years!!
Anyway, I've asked Ray and Cindy at least three times for this pattern.  Come to find out it was in one of the books I shared with them.  DUH!!!  One thing that organizing my quilt projects did was uncover the fabric I knew would be perfect for this pattern.  No purchase necessary ... I have everything required. 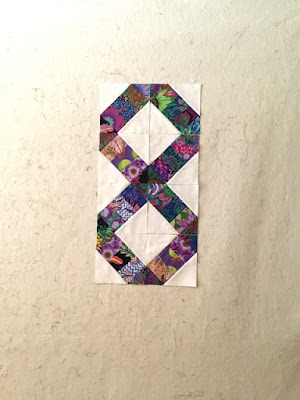 With 105 degrees on the horizon, I doubt I'll be going anywhere today, although it would probably be cheaper to drive to town and sit in Panera Restaurant all day long, leaving my thermostat set at 85 or higher.
So ... it will be sewing and hopefully solar sooner than later!!!