Being pretty much a NON-cook, the Elks Lodge has shown me what amazing things you can do with a stack of cans. Our lodge HAD (before virus) the best Friday night dinners in town.  I mean really REALLY good food.  Who knew it all came from these big cans, with a little excellently cooked meat that is.

Yesterday I went down at 11:30 to help out cooking and serving chicken dinners at the back door.  The dirty thirty are now down to the dirty twenty.  The Sheriff and two of our best Chicken Men were outside at the barbecue when I arrived before noon.  I'm sorry I didn't get a picture of the que that had rows and rows of cages where the half chickens were locked in, then turned automatically like a spit. 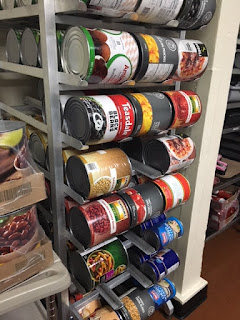 All the sauce had been cooked the day before, mostly coming from those cans above.  Marinara sauce, diced tomatoes, diced onions, loads of garlic and LOTS of spices including bay leaves went into the cooked hamburger.  I then simmered it all morning long, keeping a close eye on the flames underneath.  There were three big pans, but I could only get two in the picture. 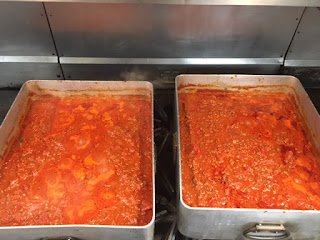 In between stirring, we loaded up 275 baggies with lettuce and a package of dressing.  So it wouldn't get soggy, we put it on TOP of the to-go boxes.  Luckily I didn't have to cook the pasta this time, just pick out all of those darn bay leaves as I spread it on and did the hand-mixing thing.  In no time we were ready to serve over 275 meals.  The chicken was place in these huge ice chests where it finished cooking to perfection! 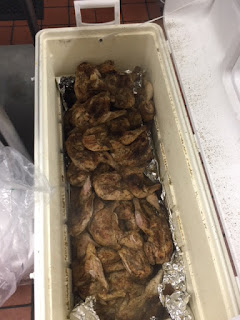 Here's another great find.  We have a little Mexican store downtown that bakes the most delicious bread EVER!  It comes in loaves that break apart into six big pieces.  It's cheaper than anything you could get at Costco and tastes 100% better.  However, that meant putting a very sharp knife in my hands.  It was easy to break them into three pieces, but then they had to be cut apart.  Such a shame that occasionally a little piece fell off the side and later when gathered up, went directly into my mouth!! 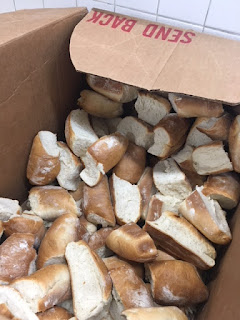 I don't know what happened ... must have been a UFO or something because suddenly all the men disappeared.  Four of us ladies were left to package up the meals in to-go containers and place them in bags for take-out at the back door. 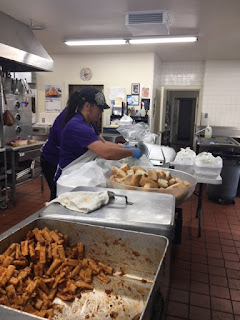 In the end, we had one whole container of pasta left over, meaning we all got to take some home.  I really try not to eat pasta, but boy was it good.  We even got an attaboy from the Sheriff (known throughout the County as the best cook around) as he ate his fill, forgetting the chicken completely.  Yay for the gals!!

I got home at 7:00 pm, a little worse for wear.  There's been way too much sitting around the house!  So it's pasta for breakfast ... and for lunch ... and probably again for dinner!!  After all, somebody's got to eat it!!  Waste not, want not!