Been To The Store Lately?

As I sit here, my sprinklers are sprinkling away.  My gardeners showed up a day early to repair the valves.  Again I had to turn the circuit breaker off because they could not get the shutoff valve to turn.       My luck was holding as nothing major happened, except for .... well .... that geyser that appeared in the lawn.

Another broken sprinkler, which they fixed post haste.  Now to test every station.  Geyser number two caught Roberto right in the face as he bent over to take a look.  No big deal because it was 103 and he was hot anyway.

Three geyser repairs later, along with one errant sprinkler watering the concrete driveway, we were good to go.  The good news is the geysers were free, as in no charge to fix those.  That made up for the high cost of the six valve repairs.

Next up on my ever increasing list of STUFF to do, was spraying weeds.  I filled my handy dandy mega sized backpack sprayer and headed out across my 2-1/2 acres.  This was probably the extent of my exercise for the last three weeks.  It felt good, mostly because as I march around I yell DIE ... DIE ... DIE to the dandelions, stinging nettle and foxtails.  I was not surprised when my neighbor came over to see if I was okay. 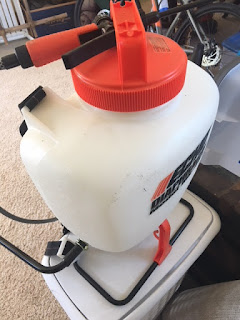 Next up, I headed off to the grocery store for a few necessities, like ice cream, butter and chicken for Cooper.  Have you been to the store lately?  I was pretty shocked that these three half-full bags came to $129.  Is it me or have they raised their prices considerably.  I got 3 roma tomatoes for $4.55, along with a package of low-carb tortillas for $6.  Holy cow .... I'm going to have to change my eating habits considerably.  This is NOT affordable!! 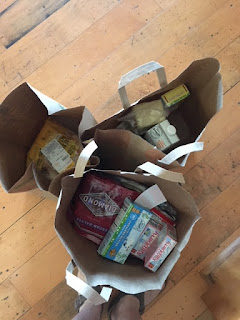 It took less than five minutes to put it all away while I scrutinized the receipt.  The prices at our Save Mart have basically doubled.  It's okay, I need to get back on my no-food diet anyway.

Out here in California, most all the chickens come from Foster Farms.  In order words, if you want chicken, you don't have much choice on the brand.  They used to be much better at processing, but I guess they are trying to keep up with the crazy demand.  This was the worst cleaning job of a chicken I've ever seen.

The neck was still covered in feathers and honestly looked rotten.  I cut away everything I could and threw it in the trash.  It's only okay because I'm cooking it for the puppies, not me.  It was disgusting with a capital D.

Thank you George Yates for showing me how to cook a chicken on the barbecue.  I held my breath almost the entire 90 minutes because I didn't know if there was enough propane left in that canister.  I had to go check on it every fifteen minutes.  YAY .... it only lasted 88 minutes, but the chicken was done. 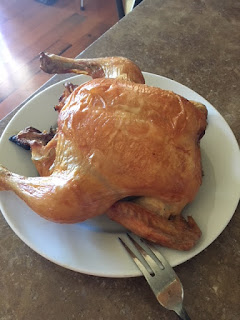 I chopped it all up and put it in the freezer for the kids.  A $5 chicken resulted in one container.  Too bad I'm not in Arizona where they do all the roasting and chopping for you.  One container has probably three chickens in it for $15.  SO much easier and the same price per chicken.

I sweltered for the rest of the day, sitting in front of a fan in the living room with the puppies who were hogging all the cool.  I'm too cheap to run the AC so it stayed about 83 in here all day and long into the night.  Actually it was still 83 when I woke up.

I swear I am NOT going to sit on the couch this morning.  I'm going outside for a long walk around the neighborhood.  I'm enough of a hermit that I rarely get out and see or talk to people, especially with the Magic Kingdom shut down.  With this virus stuff, I'm becoming even worse.  Now not only do I rarely go out but I argue with myself all the time.  Maybe some fresh air will help me win the argument!