There's a new Engineer position that has just opened up with Union Pacific.  Many of you may not have heard of our little oddity here in California called the Tehachapi Loop.  The trains needed a way to climb up the very steep mountain and get over the top to the Mohave desert heading East.

The Loop was built by Southern Pacific Railroad in 1874, rising at a 2% grade.  Any train over 4,000 feet in length, passes over itself.  As many as 40 trains a day pass through here.  The story of how this was built using Chinese labor, is amazing. 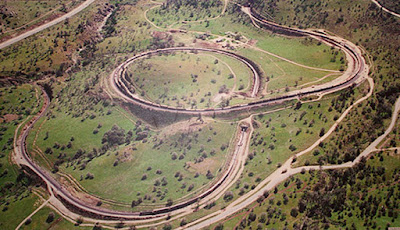 Union Pacific now controls the loop.  Why are they looking for a new Engineer?  (Not really)  Because the last one derailed a portion of the train yesterday.  There are special Engineers that operate these trains over the loop.  That's all they do, take trains over this short section, then give the reins back to the regular Engineers.

As you can imagine, there is a perfect speed to go so the train doesn't fall over on it's side ... like here.  I haven't heard if they know exactly why the train derailed.  It could have been the trucks, the sets of wheels under each car.  It's my understanding they are not actually attached to the cars so they can be easily replaced. 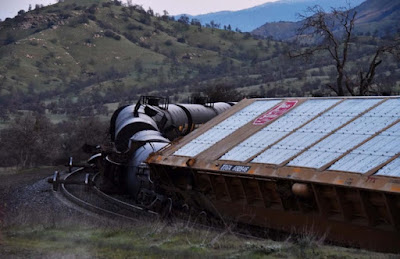 It happened in the middle of the night.  The lead engine and the following six cars (at least that's the count so far) derailed as it entered tunnel 9.  No one was injured.  Three of the cars were car carriers, but no word if they were full or empty.  Of the three remaining cars, although first reports said they were full of grain, two were actually empty and one full of petroleum.  They say nothing spilled out or leaked. 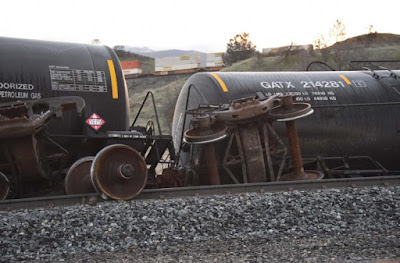 I sent this picture to Mr, Chance yesterday as it came up saying "recent Tehachapi train derailment", but I don't think that was THIS time after all.  The description they have given doesn't seem to match this Bakersfield news picture.  My apologies to Mr. Chance.  At any rate, I think trains are going to be late for awhile. 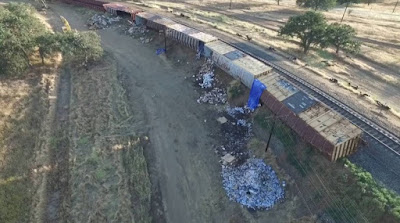 Since it was Mother's Day, I got a hankering for pancakes.  I've no idea why, since this is NOT my favorite breakfast food.  I balked initially when all I could find was sugar free syrup.  Finally, in the last second before putting everything away, I saw the word Maple.

Way back when, I ended up in Vermont with the Westerfields, who took me to the maple syrup store extraordinaire.  We ate some maple ice cream and I got a lesson in different grades of maple syrup.  I of course got the sweetest one they had.  That's long gone, replaced by this Costco version that isn't even CLOSE.  Still, it was good on my from-scratch pancakes.

Yes, I did give a thought to opening up that giant bag of Krusteaz Mix left over from the RV rally.  I would have had to fix pancakes every day for the next year.  These pretty much had no taste, but they sure looked good!! 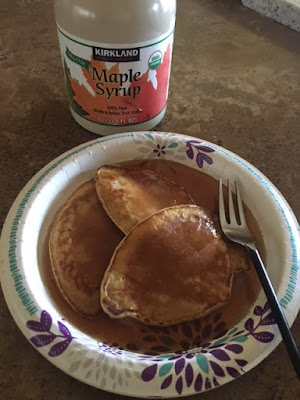 I'm off to take my Jeep to the doctor.  I have a feeling it's going to be a long waiting-room kind of day.