I was up at my normal o-dark-thirty so I could get things taken care of and arrive on time for my car's doctor appointment.  As usual when I'm in a hurry, things happen.  I ran straight into the coffee table from the living room that is temporarily residing in the hallway.  OUCH!  Another big bump on my leg.

I discovered I don't have many pictures of my Jeep, and I didn't take any because I knew I had plenty.  Isn't that how it goes?  So here's one from when I got a nail in the tire on the Oregon Coast.

Just like your regular HUMAN doctor, the car doctors always seem to run late.  I however, was ten minutes early.  People were mingling and there wasn't a mask in sight as I limped up to the desk.  No one was home.  At last the Supervisor came to get the info and the keys for my baby.  I went inside.

Ten minutes later, they came and asked me where the keys were.   Ummmm I gave them to you?  Another ten minutes passed and I watched it drive by to the shop area.  So much for the first half hour. 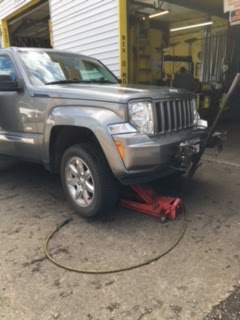 She needed two recall computer updates, neither taking any time at all.  One was for the passenger air bag and the other for something in the computer that tells you the smog system is not working.  I knew that wasn't legit because I just got it smogged and it passed with flying colors.

The only other thing they had to do was change the oil.  But wait .... we're giving you special service today.  We will rotate the tires, check the air filters and everything else they can for FREE!!  YAY!!  and it will only take ONE HOUR before you are on your way.

Then the wait began.  Thankfully, they had coffee and a waiting room.  I sat for TWO HOURS playing games on my phone.  Thank goodness I had battery enough to last that long.  People came and went at the busy parts counter located in the same waiting room.

I was thinking they would show up at any time and tell me I needed a new air filter.  They ALWAYS tell me that.  I was ready for them though because I had just changed the filter myself.

They use the latest technology here ... they welcome you with a text message, then send you three more saying if you need anything, just text them back.  Having now waited 2-1/2 hours for that one hour service, I sent a message.

At long last, three hours later, he came with the paperwork to pay for the oil change at $55.25.  I looked at the list of work done.  Computer update .2 hours.  Second computer update .5 hours.  Oil change.  Check tire pressure .25 hours, but no charge.  What happened to the filter check?  Greasing whatever they grease?  And rotating the tires?  Nada!

So it took them three hours to do one hour's worth of work.  I didn't say one word.  I paid the $55 and left, happy I won't have to go back for about a year!!  On the drive out, I went past Jiffy Lube, thinking maybe they weren't so bad after all.

The rest of the day involved boring stuff like washing all the sheets that exist in my house and trying to match up colors.  They are like socks ..... they never match up.  I have only three sets of sheet, but enough pillowcases for an army.

While heading out to the rig, I remembered to tell Dan about the water troughs I have.  There are four actually, which I was going to add to the trailer, with one being dropped off at my house.  Not sure if it will become a planter or a swimming pool!!  Maybe even a goldfish pond.

Might as well move them up to the concrete while I'm outside.  That was a mistake.  We have these things here called stinging nettles.  Touch one and you will now how they got their name.  I of course brushed up against one because I was wearing shorts.  YIKES!!!  Just the slightest touch and it burns like crazy!!

I ran back inside, jumped in the bathtub shoes and all and ran lots of cold soapy water down my legs. It worked ... the burning stopped.  My legs sure are taking a beating!!!

This morning I await the carpet cleaners while I wash and dry my wet tennis shoes!!  Maybe he'll be cute and SINGLE!!