Well hasn't THIS just been the most interesting trip!!  I left Tehachapi ... nice cool Tehachapi and headed South on 395.  Almost immediately I was stopped for about 20 minutes.  They are finally fixing that section right out of Four Corners and making it much wider.  The line of cars and trucks going the other direction was over two miles long.

By the time I hit Adelanto, it was foggy.  That's weird ... I guess it's the hot low air hitting the cool high desert air.  Nope ... it was SMOG!  In no time my eyes were burning.  As I got down into Indio, it was even worse.  You couldn't even see the mountains.   Thankfully there was no 116 degrees, only 102. 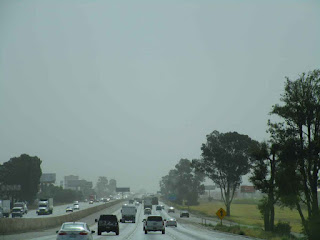 That's when I noticed my hitchhiker.  At the bottom of the wiper ... a nice spider's web with lots of dead dinner critters. 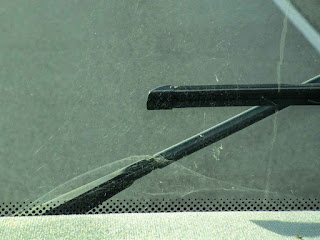 On I trudged with the AC going full blast.  That's when we came across these little palm trees.  Anyone know what kind of dates these are?  They were all full of fruit, but only five feet tall. 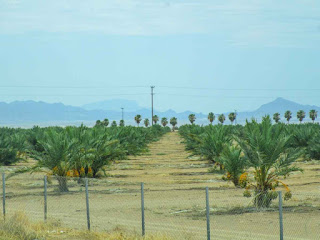 Out of Indio, everything is uphill as I climbed out of the smog, keeping a sharp eye on my temperature gauge.  Luckily I didn't have a single OH NO moment.  In no time, I spotted the Arizona border sign.  YAY!!  I'm almost home! 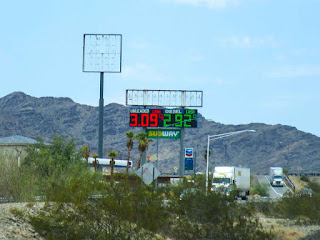 Plodding along, Quartzsite finally came into view.  Seconds after I took this image, a small sports car went off the road rolling over many times by the parts laying all over the ground.  Lucky for them, I watched as both doors opened and they started to get out.  Whew!  That was close. 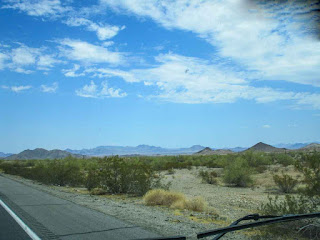 At long last, 6-1/2 hours later, I arrived at Park Place.  It's a ghost town, although there is one other rig here besides me.  That's when I got the weather alert on my phone ... a huge dust storm warning near Phoenix.  In no time there was a second one for thunderstorms, and they were headed right for me. 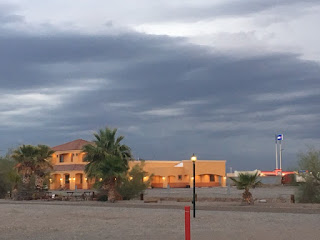 My plan was to dump my tanks while here since it doesn't cost me extra.  It's really not full enough, but HAS to be done.  I grabbed my bucket and went to the outside faucet.  Gosh ... that water smelled funny.  And it was HOT!  I let it run into the bucket, but it didn't get any better.

Pretty soon I smelled sulfur and something else I can't explain.  That's when I noticed the water is dark grey.  Are you kidding me?  This is what people hook up to and drink while here?  I let it run some more, but it didn't get any better.  It was so bad that later back in the rig, I couldn't seem to get the smell off my hands.  What's up with that??? 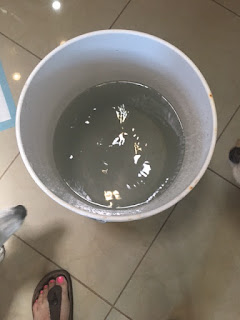 Between the rocking and rolling of the thunderstorm winds (no rain actually fell) and the 90 degrees nighttime temperature, I hardly slept a wink.  I left the back air conditioner on and set a fan up front, but it didn't help much.  It was a L O N G night. 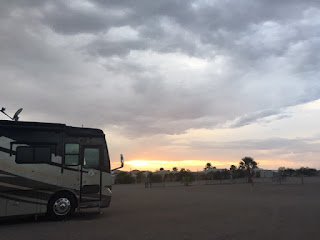 I'm leaving fairly early.  After dumping the tanks and getting fuel I'll be back on the road, hopefully missing all the microbursts on my way further south.  Storms usually pick up in the afternoon they say, but I should be home by lunch time.