And again and even again for about two hours!!  All of these images would be better if the camera had been on a tripod, but there was no way I was going out to the motorhome to get one.  This has to be one of the craziest storms I've ever been in.

It's routine around here I'm sure, but the kids and I were getting nervous.  What if it hits the house?  What if it strikes the motorhome?  Mesmerized, I couldn't leave the patio.  I sat there taking hand held shot after shot, keeping the mirror open for 12-18 seconds (while I held my breath so as not to move the camera), just waiting for the strike. 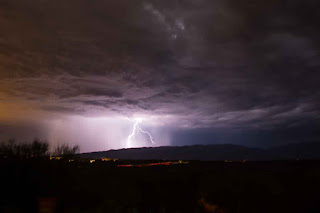 I wasn't disappointed.  Every strike illuminated the rain pouring from the sky. 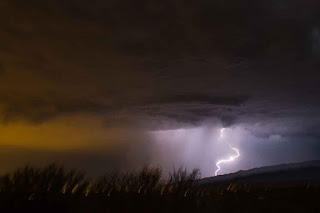 These are all facing North, the perfect vantage point.  It didn't take long before the lightning strikes came one after another.  As fast as I clicked the shutter, another one hit the ground. 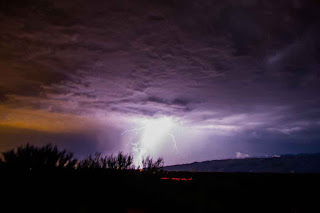 Two strikes at once ... three at once.  The sky lit up like a fireworks show.  Not only were they hitting the ground, but flashes came from the clouds above at the same time. 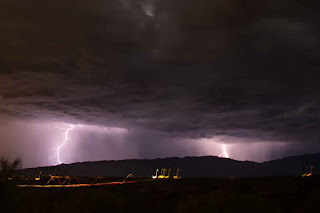 That's when I heard the crack to my right.  I jumped up out of my chair and ran for the door.  The thunder was instant and deafening!!  WOW that was CLOSE!!!!  That dark area top right is my patio cover. 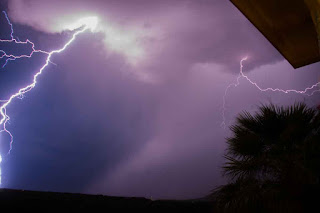 I gathered my wits and went right back outside.  I just couldn't help myself.  Sitting a little farther underneath the patio, another blinding strike hit the ground almost in front of me.  Truthfully, it was probably down near the railroad tracks, but it was enough to make me cry UNCLE. 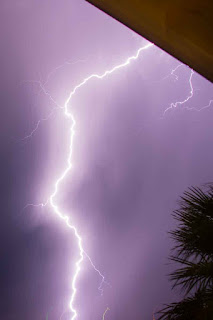 One last picture ... as always with people who photograph stuff, we need just ONE more image.   Okay, I'm done.  That was just WAY TOO CLOSE!!  I ran inside just as the rains came down in torrents.  I've never seen anything like it. 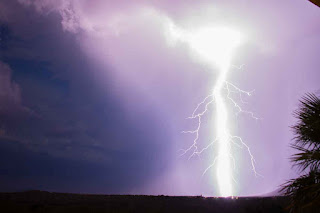 How can it rain like that when it's 103 degrees outside?  Yesterday afternoon, it did it again.  Not near as much thunder and lightning, but the rain that came down was epic.  I haven't checked to see if my motorhome is still there.  Hopefully it didn't fall off the mountain it sits on!

This Arizona monsoon season has pretty crazy weather!  You're probably going to see lots of lightning strikes in my blog!!

Unfortunately it's supposed to happen again tonight as I trot off to the local poker game about 30 miles away.  That's probably not too good for the puppies who will be alone and locked up in jail.  I'll have to leave the radio on real loud.  Wish me luck, both with the poker and the rainy night drive!!