One of the really cool things I've discovered about RV'ing is meeting up with friends you have met on the road.  Patty and John Painter became part of the Golden Spike Group some time ago and have traveled all over the western states with our group.

It happens they just adopted a new member of their family.  Meet Cocoa, the cutest English Bulldog EVER!!  She and Cooper have been carrying on conversations on Facebook for the last couple of weeks as the family traveled to New Mexico and back to Phoenix where they live, hiking mountain trails all the way. 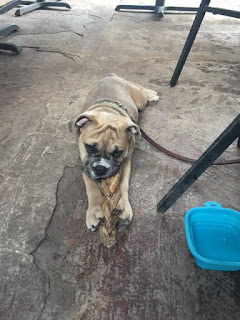 She's only three months old, so Cooper has been giving her hints ... things like how to act really tired and get her humans to carry her and what expressions will get them to give up their lounge chair.  She's a quick learner. 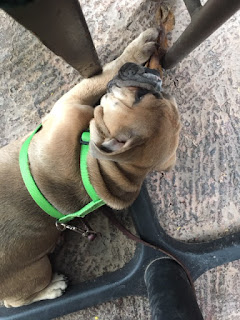 Cocoa loves patio dining, so Patty googled "pet friendly restaurants" and came up with LaIndita Restaurant in old town Tucson ... 4th Street, for those who know the area.  It wasn't exactly your upscale restaurant, but we really didn't care.  At 102 degrees, I did expect a ceiling fan or SOMETHING, but I would be wrong. 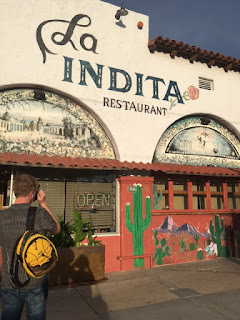 We walked through the restaurant, being led by Miss Cocoa and headed out the back door to find the tables filthy dirty and covered with chairs.  They did NOT follow us out to show us to our seats.  Okay then ..... I lifted the chair off the table, leaving the seat part behind.  I tried the second chair with the same result.  After putting all the parts and pieces together, we all sat down.

A very nice kid brought us chips and salsa, thinking we were crazy for sitting outside in the heat, and proceeded to put them on the dirty table.  Could we have a rag to clean this please?  We got a tablecloth.  Now THAT'S service!!  I'm sure it was because he was enamored with Cocoa who by then was wrapped around the chair leg twice and chewing on her bone.

Don't let her fool you ... she's a three month old puppy full of play and chew with her spiky knife sharp teeth.  What a bundle of joy!!

The background here looks nice, right?  I should have taken more pictures.  At any rate, we got our food, which was delicious, but only after asking them twice because they forgot we were there.  John never did get his beer.  It was no concern to me however, since I was having fun with Miss Cocoa. 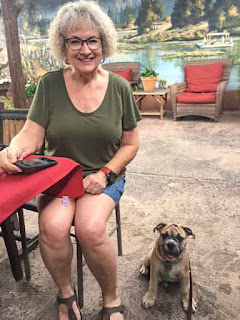 On the way out, the cook and waiter loved her so much, Patty and John had to rush out the door to keep them from grabbing her.  You can't blame them, she even made ME think twice about adopting one of her sisters who are still available.  BONK!!!  That was me hitting myself on the head for having such a dumb idea.

I spent the entire rest of the day sewing on that Block Challenge quilt, watching baseball and playing with my kids.  It's been a rather sad time in baseball with half of our team not playing because they are hurt.  Honestly, I don't even know the players names because they are all straight out of the farm team.

Unfortunately, due to my visit with Cocoa, I didn't get my awning paperwork turned in to the HOA, so that will be today's project.  The guy didn't call upon his return from out of town and I only got an answering machine.  It's okay though, I'm going ahead with the project anyway.

Next up ... I have a really cool APP for your phone!