It has been my experience that most people do not snow ski.  It was a big deal in years past, but seems to be a fading past time.  It is not exactly an inexpensive hobby, but definitely cheaper than RV'ing!!!  Being kind of frustrated that my pretty red Craftsman toolbox isn't going to fit in the bay, I returned it for a smaller one, and I had to settle for black.  Got it home, opened the box, it's bent very badly on one corner and is totally unacceptable.  Back in the box, I'm returning yet another, to Sears!!

When my friend called and said lets go skiing, being the grumpy grump that I was, I said heck yes, lets go!!!  Nothing brings my spirits up like being in the cold mountain air surrounded by gorgeous Sierra Nevada mountains.  I seriously didn't think the skiing would be worth the drive since we have had no storms lately to replace the rapidly melting snowpack of only 36 inches.  No matter, a tailgate lunch in the parking lot is still great fun.

For those who don't ski, every run is marked with a colored diamond so you don't get yourself on a cliff that you can't ski down!!  Happens LOTS because most people don't pay attention to the signs!!  Green beginner, Blue intermediate, Black expert.

I didn't make it to the slopes last year at all, and only once this year in December.  That means I'm totally out of shape and not sure I remember HOW to ski.  Sandy promises we will stick to the intermediate runs.  I should have known better!!  After only TWO intermediate runs, she was heading off down the black diamond trails.  That's the very steep, very rugged, very scary slopes!!!  Two years ago, I was down them like a champ ... yesterday, I was pretty tentative.  Then I remembered the tool box. There's nothing like a little grumpy frustration to get you screaming down the cliffs with ease!!  We hit every black diamond two or more times before we took a 30 minute lunch break.  Sandy brings "different" things to eat ... like raisin bread with cream cheese and watercress ... but sitting in that parking lot exhausted, it tasted wonderful!!!

Back on the slopes for more blistering runs, my legs felt like jelly, and after five hours of skiing, I was ready to hit the heated car seat for the ride home.  It was an absolutely gorgeous day of awesome skiing, despite the warm temperatures.  Especially since we felt like we had our own private ski resort, with no one on the slopes but us.  Everyone who thought the snow would be awful, didn't show up, giving us one of the best days of skiing I've ever had.  And I forgot all about the tool box!! 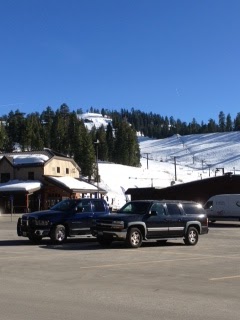