The Sierras!!!  There hasn't been much rain in central California, but last week there was just enough to allow for another gorgeous day of skiing the Sierra Nevada mountains.  Up at O-Dark-Thirty, I packed up my gear and drove to my buddy's house ... and off we went to ski the day away. 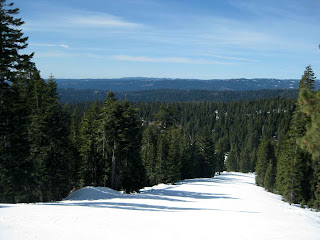 We arrived just in time to get a money parking spot and headed up the main lift.  Cold temperatures and new grooming equipment have kept the resort open with only 39 inches of snow.  To our right, on the beginner slope, the boy in the red coat made a beautiful design on the snow to the left side as he came slowly down the hill.  I'm sure he had no idea the trail he was leaving, but obviously, his repetitive turns were very uniform. (clicking on the picture should enlarge it so it is more visible) 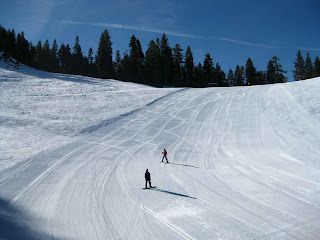 I don't think it got over 50 degrees and the snow stayed absolutely perfect.  After 7 long runs (two hours) screaming down the hill, my legs were like jelly ... time for a philly cheese steak sandwich.  Thirty minutes later, we were back on the hill.  You would think we are hard core, but really we're just trying to get our $300 season pass worth of sliding down the mountain. 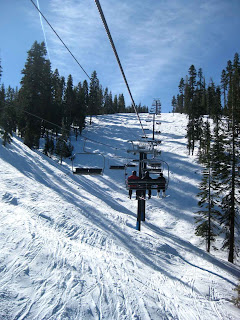 This much hard skiing does make your legs VERY weak and tired, so rather than risk broken bones, we chose to ski the short runs ten more times and headed out around 3:00.  The reward for such hard but enjoyable work, was Pie In The Sky.  A small operation in business since 1954 according to their inside sign, they DO have the best pizza I think I've ever had.  There's 1-1/2 inches of "stuff" on the top of a crispy brown crust.  You always have to wait ... great food takes time to cook ... and it's not exactly cheap ... but it is DELICIOUS!!!! 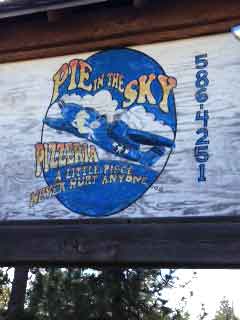 A great ending to another great day!!  Hoping for at least two more ski days.  Pray for snow!!!!!  Maybe I should go visit Patty and Dan in Tucson ... seems they have LOTS of the fluffy white stuff!!
Posted by Nancy Kissack at 4:40 PM