Most people know their family history.  Ours never talked about it much.  Since looking into my mothers side of the family, I have found some very interesting tidbits.  My grandmother was born in Kansas, the daughter of a disinherited socialite who married a "dam" Yankee.  A divorced one at that!! Here's the family portrait ... my Grandmother is the baby.  Looks to me like they were pretty prosperous. 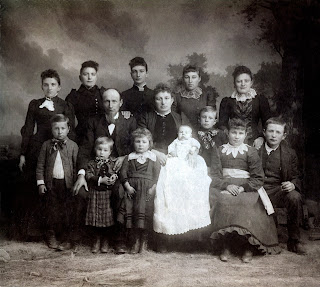 Eventually Grandmother ended up in Colorado, where she married a farmer/cattleman.  She then had two daughters and moved to California, where her husband worked on paving Walker's Pass, one of the few roads to the Eastern Sierras.

I was told my Grandfather came from East Germany, but it appears he was born in the United States.  I also discovered one of the boys above,  lived with them on the ranch in Colorado.  More on this later.

On another note, I took my Tiffen Phaeton to Fresno Truck Center, a freightliner dealership/repair shop, to take care of a Recall I received.  It was easy to find and full of really nice men jumping up to help me.  I can't lie, it was very nice!!!  Then I found out I was totally on the wrong side of the building.  A quick trip around the back side and I was met by their service manager.  In 15 minutes, the mechanic was inside with his tools, tearing my dash apart!!!  Now I'm kinda partial to my rig ... and when someone starts with a power drill, hammer and pry bar, I get pretty nervous. 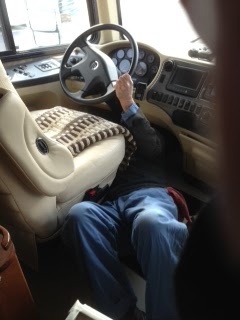 After trying to pry the instrument panel loose for the fourth time, I (nicely as I could) suggested maybe he should look UNDERNEATH to see if anything was hanging up ... I certainly didn't want him to rip it out, along with all the wiring!!!  Luckily, he agreed ... I snapped the picture while talking loudly ... and soon he had it out.  It seems there are two sets of wires, held together with fasteners.  He said if he couldn't pull them apart, then I was good, and nothing needed to be done.  Thankfully, they didn't pull apart, and he made sure they were still tight, along with everything else (after my gentle nudging ... and explanation about the last time I had work done on the dash ... I'm still trying to get stuff fixed). 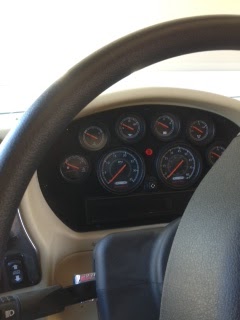 Back in place with the addition of two black marks on both sides where it scraped, I started up the engine to see that all the gauges were still working.  A sticker on my door confirmed the work had been done, and I was free to leave 30 minutes later.  Good thing, because it was 30 degrees and I was frozen.

One down ... one to go.  La Mesa Davis has the new CD player to replace the broken one, and installation will be next week.  That should be it ... when the snow melts off Tehachapi, I'm heading to Death Valley.
Posted by Nancy Kissack at 2:42 PM