Finally!!!  I'm off on another adventure to Yuma Arizona.  Nick and Terry Russell publish the Gypsy Journal Newspaper and have two rallys a year for RV lovers.  The West Coast version is at the fairgrounds in Yuma.  Having been last year with my good friends Patty and Dan Chance, I didn't want to miss it.

I try to plan my trips ahead so I know how far to drive and where to spend the night and get fuel.  I was all set for a long drive Friday to Beaumont-Banning area in southern California, spending the night at the Elks Lodge when Dan called and asked if I had checked the weather predictions for WIND!!  Uh ... no ... wind??  ... I was so concerned about SNOW over Tehachapi that I had not considered wind.  Apparently it was 40 mph in the Yuma area ... my RV can handle about 25.  TOTAL change of plans!!

The NEW plans are to drive the short leg to Tehachapi and spend the night, driving the long leg to Yuma when the winds had subsided.  This is my second home over the pass where I have spent many nights.  Good thing I planned for all weather, cuz it was 36 degrees when I took this picture as I was heading out at 6:15 a.m. in order to get through Banning before the winds picked up again. 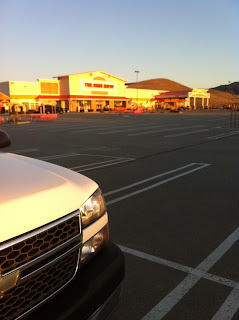 It was a long drive the second day, broken up by several doggie stops, but I love seeing new country.  Just as I pulled off the freeway to the fairgrounds, Dan's timing was perfect ... he called to see where I was.  Entering the back of the fairgrounds, the "parking crew" staged in a large lot to spend the night before locating OUR final parking sites.  The crew then met to discuss the rules about who is allowed to park where for the Rally.  Yes, another Cooper sunrise.  He has me up and out with him before the sun comes up every morning!!! 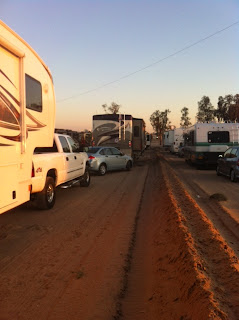 Sunday morning, we moved to our usual spot ... out by the horse barns.  It's perfect!!!  A few trees for shade, power, water if needed, LOTS of sand and no neighbors. 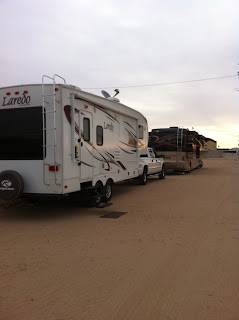 And of course I'm right at home around the horse smells!!!  LOL 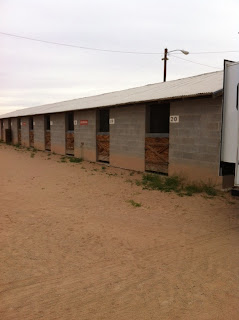 Yesterday as Dan was parking people, Patty and I took off for a full day of shopping!!!!  The main attraction is the huge Flea Market they have here where I got Jessie a new harness, and me LOTS of stuff including LED lights for my RV, a Route 66 shoulder bag, two (yes TWO) watch bracelets for $7.95 each (Patty swears they last for years) and miscellaneous "stuff".  A not so quick trip to Walmart for food finished off the day.  After a great chicken spaghetti dinner that Patty cooked, I was off to snooze land.
Posted by Nancy Kissack at 7:31 AM