The continuing saga of trying to get a Tiffin Phaeton from Arizona, registered in California where unfortunately you have to deal with the dreaded (da-duh  ..... da-duh  ... da-duh .. da-duh) (shark music)
DMV!!!!!!!!

Another three phone calls later (16 so far), I was able to determine that the Certificate of Origin had indeed been overnighted (thanks to Karen at La Mesa in San Diego) to my local DMV office.  I got the tracking number, the time delivered and the signature name.  I wasn't taking any chances. 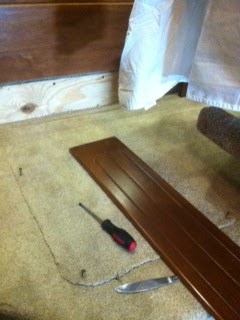 In the meantime, I'm now trying to locate the engine access panel in the RV.  After lifting up the bed and scraping with my fingernails, I was able to locate 3 screws which I removed far enough that I could use them as handles, as there are none on the panel.  And what to my wondrous eyes should appear???  The braces for the bed are installed with screws ON TOP of the panel.  Two broken fingernails and very sore fingers later (from running them over the carpet a hundred times trying to find the screws), I had located one of the many screws holding IT in place.  Time to get back on the phone.  What irritates me is that the service guys seem to think it is ME that can't find the screws ... they would be able to locate them easily.  Ok guys, my friends that know me, know this isn't true.  I was born and raised on a broke cattle ranch.  We fixed everything from the caterpillar tracks to the vehicles (World War II jeeps).  There was nothing I didn't help repair.  Soooooo  time for another phone call. 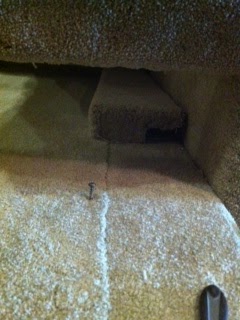 I did have the foresight to make an appointment with DMV this time to avoid the 90 minute wait in line.  Knowing I would have to deal with Miss DMV, I came prepared for war.  I just wanted to pay the fees and get out ... I'll worry about the certification later.  Much to my obvious surprise, I was lucky enough to get a just hired new girl ... which was a good thing.  Not jaded, she smiled ... and talked ... and smiled!!!  Not familiar with my paperwork, she had her supervisor-trainer helping her.  OMG they were sooooo nice.  I had a chance to talk to the new girl and told her how awesome it was to speak to someone "nice".  She laughed!! and agreed that there were some "personality" problems.  I pleaded with her not to become one of THEM!!  She laughed again.  I couldn't believe my luck!!!  Both girls processed my paperwork, took my check and actually thanked ME!!!!  The supervisor also gave me the phone number and name of the verification person at the local CHP office that could do the EPA verification using a mirror.  I walked out on cloud nine!!!!

I'm going to go put the screws back and soak my sore fingers.