You better not cry ..... you better not pout I'm telling you why .... Santa Claus is not only COMING to town, he showed up yesterday to drop off a few extra gifts to the kids at the Elks Magic Kingdom.  Every year this organization gives away toys to the children and grandchildren of any Elk Member.  I'm pretty sure several people even brought their neighbor's kids.  All they had to do was sign up. 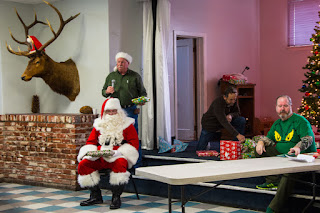 Clint, in the Grinch shirt, spearheads this effort every year without fail, even though he just went through heart surgery ... that's how committed these people are.  Our local Sheriff is Elf #1, calling out the names one at a time, and is handed gifts by Elf #2 (retired Fireman) that works Bingo.  Frosty the Elk even showed up to help with the festivities!! 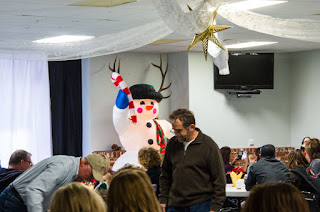 Can you imagine being in a room full of kids thrilled to see Santa Claus?  Most were pretty shy about taking gifts from strangers, giving a sidelong glance at Mom to be sure it was okay.  To make it even better, we filled them up with soda and candy canes before the main event.  That sure brought the noise level up!! It was a full house as we scrambled to set up extra tables.  They expected 100, but over 130 showed up, grandma and grandpa included.  Once half the names were called, I began to serve the ice cream and cookies .... after the panic attack when no one could FIND the ice cream.  There's nothing more exhilarating than spending 20 minutes in a walk-in freezer!! 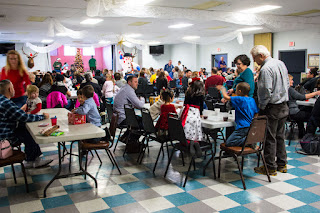 I was looking for big buckets, easily recognizable you'd think.  Eventually someone looked in the big yellow bags and discovered two gallon containers.  Thank heavens!!  Several Elk wives made cookies, which we put out along with dozens of store-bought that lasted about 15 minutes.  The ice cream went so fast, we ran out of bowls and had to use paper plates.  When we ran out of those, the kids just put the cookies in their pockets while we washed the dishes!! 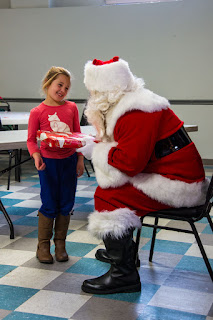 The cowgirl cutie above thanked Santa for the gift and started to walk away .... then turned around to say "by the way, the "S" is silent in my name, just so you know"!!  Okay then ..... as everyone pronounced her name correctly in unison!!

Let me tell you, there's nothing better than making 86 kids happy.  It wasn't really even about the gift ..... it was ALL about Santa Claus!!  Little do they know it's Bingo Bob under that beard!!  Even his own Grandchildren didn't recognize him.  Now THAT's an acting job!!

So you better watch out  .....  Bingo Bob is coming to town to see if you've been naughty or nice, and he reports directly to Santa!!!  By the way, I even got to sit on Bingo Bob's lap for a picture ... and Elk #1 pronounced my name exactly right!!!