There's no autocorrect working there (don't you just HATE that?) ... we really did throw curbs at my house yesterday.  As you drive around the neighborhood, every single house has curbs except mine.  Maybe the contractor got tired that day and forgot to come back, who knows, but it has always made it difficult for the mowers and blowers to stay within the lines.   Like coloring when you were a kid, the borders change quite a bit, and so did my lawn and flowerbeds.

Along with the electrical work, I contracted for mowing strips and curbs ... what a difference a little curb makes!!  To make it even better, breaking tradition, THIS contractor showed up ON TIME!!! 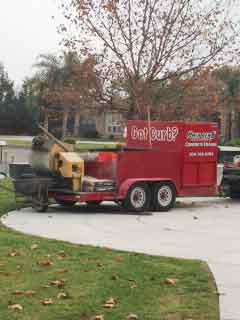 They marked a water line and the electrical from my new lights, then began raking away the debris from the lawn edge.  With that done, he used a kind of cutting machine that cleaned up the edge and cut a perfectly level path. 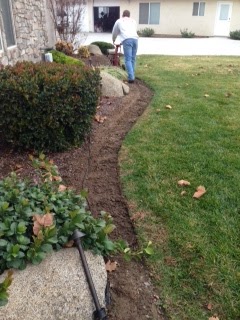 The helper dumped concrete in the machine, which formed the curb while pulling a piece of steel cable through the middle for stability.  Hopefully this will keep weedeater man OUT of the flower beds where the drip irrigation lies. 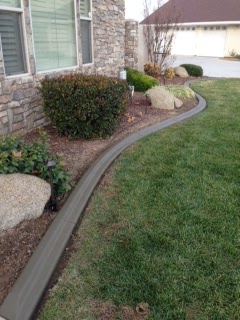 They did both sides of the front flower beds, then moved to the street and curbed that side of the lawn for $1000.  It makes it SO much more neat and clean looking.  I'm pretty sure this will pay for itself in about a year, not having to replace irrigation lines constantly. 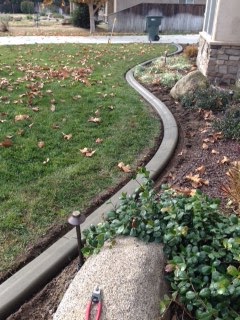 I had many errands to run in the afternoon, but all had to be delayed while I parked myself in a chair beside the front door.  If the kids in my neighborhood discovered the fresh concrete, it could be destroyed in an instant.  No one seems to teach their children respect any more!!  I'm sure the kids on the bus were wondering why that old lady was sitting outside, but that's okay.  The crazier they think I am, the better, so they will stay away!!  Thankfully, the kids next door are growing older and maybe becoming a little smarter!!

Before going in, I took a small knife and put MY little mark ... our family brand ... in one corner down by the dirt.  If you don't know it's there, you won't see it.

Today I'll hit up Home Depot for that molding.  Hopefully I'll find someone there who knows more about it than I do!!  I'm also in need of some type of saw ... like a skill saw, maybe a jig saw ... really I don't know what to use.  I have a too-large piece of 1/4 inch thick flexible plastic covering my quilting table that needs to be cut down.  Whatever I get, I would like it not to be project specific.  In other words, hopefully I can use it for cutting other things should the need arise.  I guess the projects will never end!!