All Quiet On The Kingdom Front ....

I contemplated all day yesterday, as I sat on the couch, about whether I should buy a new treadmill for Christmas.  The latest and greatest has you going uphill a lot ... a plus in my book, since walking on flat ground around my neighborhood isn't having the required results.   They are so fancy nowadays that you can walk uphill in Paris, London, the Alps or in MY neighborhood as you watch the screen, hopefully keeping you from being bored out of your skull.

When I finally got OFF the couch and went to the Magic Kingdom of Elks, I asked everyone if they thought it would be a good idea.  One hundred percent said THEY would never use it, but they were sure I would!!  I'm still undecided ... but it's on SALE!!

At any rate, it was a pretty quiet night in the castle.  Over 129 peasants showed up to voluntarily give us all the profits they accumulated in the last week.  It just amazes me every time as I try to figure out how they pay their bills and eat when the last of their grocery money lands on our table.

There were lots of goodies, as most of the women do a LOT of baking ... kind of like me ... around this time of year.  We were flooded with cupcakes, goodie bags and brownies as they complained about the latest winner winner chicken dinner at the High School Bingo night.  It's not unusual for them to come away with $1200-1500!!  I would probably make a house payment, but instead, they come to our game and buy two or three times their normal amount of cards.

And so it went in Bingoland.  The sad part is seeing the decline of many of our players, from old age (90 to be exact), to dementia to parkinson's disease to physical ailments and the use of wheelchairs.  It sure makes you thankful you can still get around and work the infernal machine.  Which reminds me, it wasn't as happy a camper as the participants last night.  Every time it went to sleep, it did weird things when we woke it up.  Kind of like me I guess.

My project for the next couple of days, besides the contractor that is coming this morning to put mow strips around my front lawn, is to repair the kickboards, or mopboards as I call them, in the spare bedroom.  Apparently there was some kind of built-in that was removed before I bought the place, and an entire wall is devoid of molding.

I'm pretty sure I'm going to have a hard time finding this exact one, of which I need about 14 feet.  The bad news is I need to go around a corner ... and I've never done anything like this before.  The good news is that like any female, I asked for a power chop saw many years back, which Santa delivered under my Christmas tree.  Cutting the angles should be a snap.  SHOULD be!!  I think I'll get several extra sections of molding, just in case. 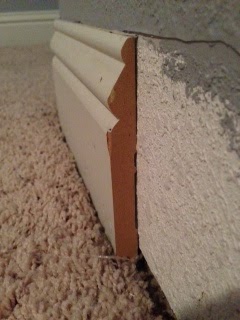 Time to get my act together for the contractor coming at 8:00.  Contractors have always had a different version of what I call a WATCH ... that thing you wear on your wrist that tells you what time to show up.  Hopefully he has the same one I do!!  From there, I'm heading out for a little discount Christmas decoration shopping, with a stop at the Magic Kingdom to pick up some scrolls with the King's declarations about how his money can be spent.  I guess I volunteered to be one of the five controlling tax collectors.  I'm pretty sure it happened one morning when they woke me up with a phone call, making me go all weird like the infernal machine.