What Do You Say To RUDE People??

Everything was going along swimmingly yesterday, even with some slow-to-raise jack problems.  I headed out with a sack full of oranges feeling pretty good.  The weather couldn't have been any more perfect.  No rain (therefore no snow), no fog and no wind.  What more could a still sick girl ask for??

A little less traffic would have been nice.  I've never seen Tehachapi this crowded before, but we trucked right along.  I totally hate the Hwy 15-215-210 route, but with most of the construction completed, it wasn't too terrible. 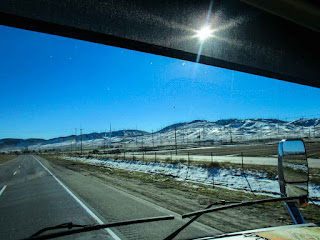 My plan was to stop at Morongo Casino on Hwy 10 for fuel.  Worst idea I've had in ten years!!  The way it's set up, once you get in, you can't get out except through the pump islands.  It was crowded, with one RV at the pump on my side and two big trucks on the outside.  It's okay, I've got lots of time, I'll wait.

Little did I know I was soon to become an outraged woman screaming obscenities at a RUDE old man.  The truck on my right couldn't pull forward enough for me to get right in behind the RV.  When I saw this pickup pulling along side me, I opened my window and said very nicely that I was next in line.  He just waved me off and pulled in front of me.  HEY!!! 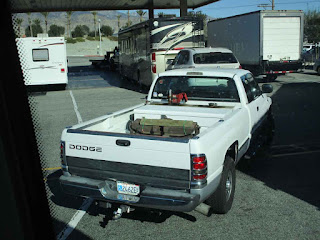 I got out and knocked nicely on their window and again said I was next in line.  He flipped me off.  That did it!!  YOU JERK!!  Not my exact words!!  I got back in my rig and hit the air horn as he pulled up to the pump, with me right on his bumper.  Luckily, the guy in front pulled away, so the rude idiot got in his truck and pulled forward.  When I got out to pump fuel, he called me a bunch of names that I won't repeat.

Well you AH.  You crowd in line in front of me and you call ME names??  I read him the riot act, as did two truckers who came up behind me for support.  They called him a few choice names too, whereupon he shut up and pulled his fuel nozzle out of his truck ... with fuel still flowing.

He, his truck and the ground were covered in about a gallon of diesel before he figured how to turn it off.  He then turned his truck around facing me to fill his other tank.  When done, instead of backing out, he tried to go against the flow of traffic, honking his horn and reving his engine (?? seriously??) until someone finally moved, and off he went with screeching tires.  WHAT A JERK!!!

I got commendations from everyone in the area for standing up to the guy.  Maybe I ruined his day and he'll think twice about it next time.  I know, probably not.  To make matters worse, the fuel pumps were so slow it took two minutes to get one gallon in the rig.  Forty minutes later, I gave up and left with 3/4 of a tank.

Finally landing in Indio, I was parked by the crew in the vendors area with a 30 amp hookup.  As cold as it is here, I'm very thankful for electricity.  My gas heater has been running all night, so I think it's time for an electric blanket.  Jonathan appears to be warm and toasty with his heat lamp. 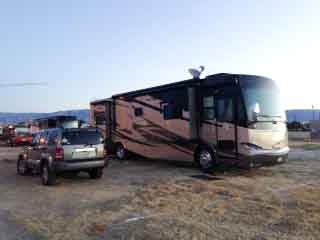 Here's the windshield crack ... can't seem to get a better picture.  It hasn't spread yet, so on the advice of Mr. Chance, I'll have it filled as much as possible, then hope it doesn't spread until repair in Oregon this summer.  Unless of course someone knows of a GREAT window replacement business around Yuma or Tucson ... my next destinations. 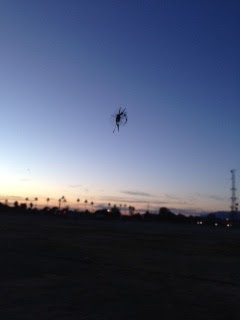 Not my best trip thus far, but in spite of being sick, having a broken windshield and almost going to jail, I'm pretty upbeat.  No worries, I could have taken that guy in a flash and I'm sure my friends would afford me bail!!