I woke up yesterday to the worst foggy rain I've seen in years.  Misty may be a better word, making the frogs REALLY happy!!  I couldn't even see the end of my property.  It stayed that way most of the day, which is why I AGAIN never got more than 20 feet from my fireplace.  It was certainly good news for the curbs however.  They hardened up really nice (no cracking due to too much sun) ... enough that I don't have to worry about the neighborhood kids any more.

I checked up on that Amazon order I made in October that should have been delivered October 31.  When it arrived at the Las Vegas facility (one day after my notice to pick it up), they returned it to the sender ... Amazon.  I guess I won't be getting those free flashlights after all.  Bummer!!

With all the beautiful Christmas lights up around the neighborhood, I thought I would get some GREAT images ... except the only thing I had with me last night was my cell phone.  Gosh .. what terrible pictures!!  I suppose they weren't meant to take pictures in the dark, but these are REALLY bad.  That's a challenge in my book ... now I'll just have to take my REAL camera out and see what I can come up with later in the week. 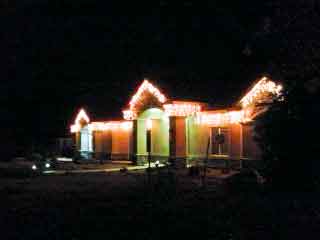 My neighbor's house above always looks really nice.  Down the street however, are the most amazing colored lights I've ever seen.  I'm guessing they are LED's because the colors are so spectacular.  Not exactly Christmas colors, but pink, green, yellow and orange!!  Someone has too much time on their hands (kind of like me) because every single little branch had lights. 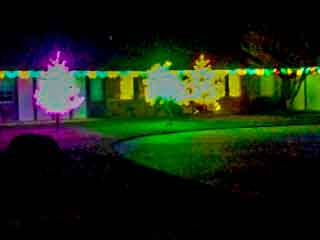 I can't wait to get better shots for you ... this one has green holly with red bows (all done with lights) around their entire house.  The top piece is holly holding a gorgeous wreath.  I'm so disappointed in my iPhone!!  I think I might be prompted to put up lights, were it not for the fact I have to leave right after Christmas. 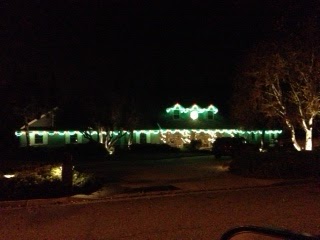 By 5:00, the rain finally quit as I headed out to the Elks Lodge for a meeting.  It's always hard to get people to volunteer their time, especially in an official capacity, so I finally stepped up and accepted a position of Trustee.  It's simple really ... just make sure they don't spend restricted money on something they shouldn't.  Financial statements and that sort of boring stuff.  I have to say however, that this is a lively group of four guys, and surprisingly I felt very comfortable with them.  The contractor, the insurance salesman and the business owner were happy to welcome an accountant.  I was happy that the five-year trustee was an IRS Auditor!!

The trip into town was pretty froggy, as we say in my area, but nothing compared to what it used to be in the old days.  I remember many Christmas vacations that we drove to Bakersfield with everyone's head hanging out the car windows (our noses turning to icicles) making sure we stayed between the lines of Highway 99 as we cruised along at 35 mph.  That made for some pretty LONG trips South!! 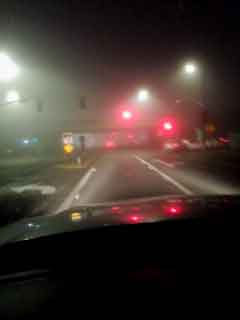 What it DID do however, was make those of us who live here, really good drivers in the fog.  Although we haven't had much in the past ten or twelve years, this year promises to be froggy and foggy.  Lucky for me, there was no one on the road last night as I came home.  Those not used to this type of driving, tend to go 20 mph or less, causing crazy accidents from going too SLOW. 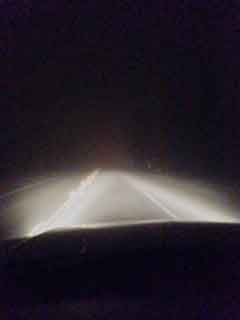 Back to the Magic Kingdom of Bingo tonight ... but it's FRIDAY you say!!  Yes, but it's time for our annual Christmas Party.  Not really a party, but a free meal we all receive for giving of our time.  Steaks and prime rib are usually on the menu, and we are all treated like Kings.  It's the only time we see all the spouses of the people we work with!!  Okay, I confess ... it IS a party, as it starts off with two free drinks for everyone.  I stop after the first one and donate my second ticket to someone who isn't driving.  More than one drink and I'd be spending the night on the Bingo floor!!