I Can't Believe It!!

How could it possibly get any colder!!  I AM still in California, right?  What happened to all those El Nino rains that are supposed to keep our temperatures in the 50's??  It's 28 degrees here this morning. Brrrrrrrrrrr!!  My heater, set at 65, ran most of the night, which of course kept me awake, except for that few minutes when I jumped from the airplane (it was going to crash), and landed in the jungle.  When I finally got home a year later, they had given away all my camera gear and luggage.  I went on a rampage, just before waking up to Cooper kisses.  He must have thought something was wrong ... sweet baby!!

While cruising the web yesterday, this popped up on my screen.  Revolution Kites have these amazing Trifinity screen-printed beauties for Christmas.  Actually, they have LOTS of new ones, but this black and gold caught my eye.  If you post any questions on Facebook, they will answer immediately.  I know, because when I asked if it was for sale, they responded in about ten seconds.  My name is Nancy and I'm addicted to Revolution Kites.  It should arrive to it's new home in about four days!! 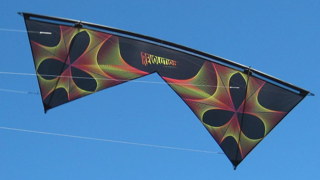 It was Magic Kingdom time last night, as I headed out with the proper frame of mind.  You have to be mentally prepared to work this gig!!  Everyone had on their best Christmas sweatshirts and blinking Christmas light jewelry.  Those that always complain, complained more than usual.  I would too if I was spending that much on Bingo instead of presents for my kids.

We upped the game with lots of $25 gift cards from Target and bags of wonderful toasted almonds.  I increased the payouts as much as possible, hoping at least SOME kids and grandkids would get presents this year.  There was the usual "you didn't give me my change" and "you didn't give me my red ticket" .... it's there, just look in your pack of games.  Sure enough, it always magically appeared.

In return, the Castle Lawyer and I received lots of goodies, but missed out on the brownies.  The guys in the back room sometimes forget we are there, while they down those brownies one after another as fast as possible.  It's okay ... a moment on the lips and all that!!

We left the Magic Kingdom to hugs all around, except for the guy who has to take my place for the next two months!!  As I pulled into my garage, I happened to look down to see my mileage at 99,000.  At 11 years old, my big truck is still humming along.  I usually trade them in at around 80,000, but since this is a diesel, I'm hoping it will last another 20 years, at which point they will probably take my drivers license away. 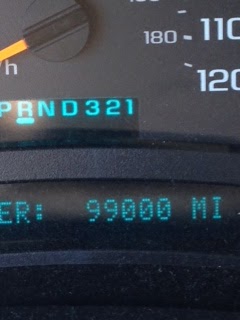 I'm lunching with the Castle Lawyer today at Hilmar Cheese, where her son works.  Maybe we'll get the inside scoop on their cheese chowder!!  Then it's off to the portfolio review at the local College.

I'm hoping we don't get any more severe frost warnings ... it's fine for the almond growers, but the citrus farmers are having heart attacks right now, not to mention me when I get that PG&E bill!!