More rain and dark clouds enveloped this part of the country all day long as I perused my PG&E bill. I think I better stake out my spot on the street corner so I can gather up some extra change!  True, it has been freezing cold and I've had the fireplace going most of the day, but the biggest change is in the amount I am allowed to use at the lowest rate.  The more you use, the higher the rate ... shouldn't it be the other way around??

Even when I'm not here, with only two lights turning on and off in the morning and evening, the bill is $100 a month.  I even turn the fridge to vacation mode and unplug absolutely everything and I'm STILL not in the bottom tier.

So much for my security lighting!  I took out several more light bulbs (even though they are LED's), set my thermostat to 65 degrees in the house and am back to living in the dark.  It's not that I'm really THAT cheap ..... I just don't understand how an electric company can go bankrupt and still pay their top management hundreds of thousands of dollars in salaries, not to mention benefits.  If they would quit sending two pieces of junk mail to every single person on their list every month, that alone would save millions and they could extend the tiers!!

Yes, I have thought about solar, probably another reason rates are going up since so many people are having it installed, therefore less money in PG&E's pocket.  At the present time, the cost doesn't justify the savings, and all those panels would have to be on the front of the house to be in the sun.  My solution is to spend more time in Arizona in the winter.

Just to get out of the house yesterday, I went to Petco for some dog food.  Why is it I never seem to get out of that store for under $100?  It's just like Costco!!  This time may be the first however, since the harness doesn't fit Cooper and Jessie has nixed the kitty bed.  A quick run by the grocery store for a small turkey to cook Christmas Day, then a mail stop and I was headed back home.

Around 6:00 I think, the dogs went ballistic at the front door.  That's funny ... no one was there ... but when I opened the door, this is what I saw.  My jaw dropped open!  I've never seen anything like this before.  I ran back in to grab my camera ..... sights like this can disappear in literally seconds. 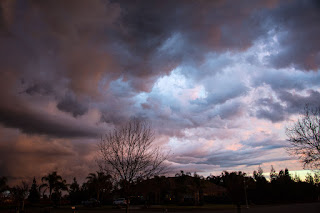 The progression of this most amazing display had me on the porch for 15 minutes.  The images just don't do it justice. 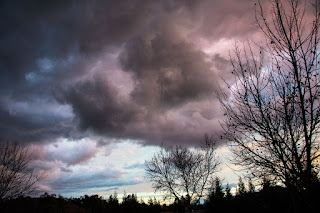 The clouds were VERY close to the ground, and the layers of different colors and shapes had me snapping away ... maybe 40 pictures in all. 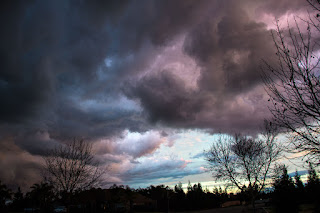 The black cloud (top right) dropped a few big drops as tiny bits of blue sky opened up, surrounded by the yellows of the sun setting.  What a beautiful display ... and I think I was the only one in the neighborhood who saw it.  Thank you puppies!! 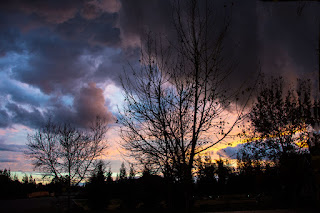 I spent the rest of the night throwing the toy for Cooper.  You know those barrels they have at the checkout stand full of toys?  The ones with no prices on them?  Next time I'll pass them by ... $$$$.  It was worth watching him toss it around though ... it has a squeaker and seems to be indestructible, so maybe it will last 30 days or so. 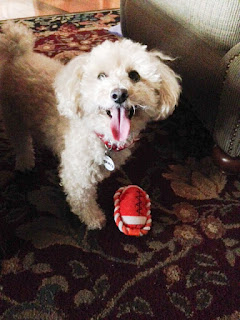 It's the eve of Christmas eve and Santa will be racing around the world soon.  I hope you have all your shopping done and don't get stressed out cooking that amazing Christmas dinner.  Just enjoy being with family and friends.