I think I should change my angle of attack.  From now on, I'll post my project, then wait at least three days so I can gather up all the good advice BEFORE I actually make a gigantic mess!  I received an email from Miss Terry yesterday about a different type of saw ... a handheld skill saw with a three inch blade.  Believe me, Miss Terry knows everything about cutting and sawing!!  I watched the video and LOVED it!!  It probably would have made my job MUCH easier!!

After my lovely day being ignored at Home Depot, I set aside the skill saw box.  No use tempting fate when my head's not in the moment.  About mid day, I finally unpacked my little Ryobi 6-1/2 battery operated saw.  After scanning through 25 pages of instructions in languages I couldn't understand, I took the little key thingy (that's a technical term) and removed the nut that I thought SHOULD hold the blade on.

I'm not embarrassed to say I was a little nervous.  After all, this blade could go flying through the air and cut my arm off ... or worse, damage my beautiful quilting cabinet.  By the way, this blade is made especially for cutting plastic, veneer and laminate, according to the LADY at Home Depot.  Once tightened down, I held it up as far away from me as possible with it facing the wall .... turned my head, closed my eyes and hit the GO button!!  Imagine my shock when it worked!!! 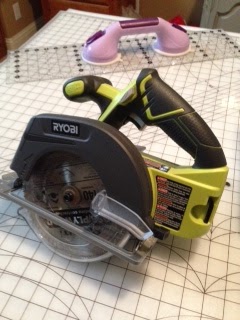 I contemplated taking the huge sheet of plastic (5' x 8') outside to cut it, but I had nothing to set it on .... not even blocks of wood.   Since I knew there would be plastic all over ... like sawdust when you cut wood .... I covered everything with old sheets.  I began the cut.  It started out like butter and soon turned to something like my meatloaf!  It's binding up, thinks I ... so now I have to find something to prop up the overhanging 12 inches.

Lets see ... some cardboard, a couple of large picture frames, my ladder and a chair later, I had the edge pretty level and continued to cut.  About half way through, I had to stop.  I doubt I will ever be able to hear again with all that ringing in my ears.  It looks pretty good though ... the edge is smooth and even ... I'm pretty happy!!  With two pair of my blue earplugs stuffed in each ear, I continued the cut again and walked the length to the end.  YAY!!!!  I can't believe I did it!!!!  And I still have all my fingers and toes!!

The next problem was of course, the mess I made.  I think there's not much worse than plastic sawdust.  It was everywhere!!!  In my hair, on my shoulders, four feet away in the room!!  I might as well not even bothered with the sheets.  Two hours later, I finally got everything vacuumed, including the saw.  What a huge mess ... but here's the final result!!  The plastic hangs over the table about one inch on each side.  It's very smooth, no sanding required.  Not exactly a perfect straight edge, but close enough!! 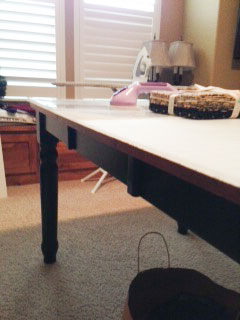 Early in the morning, before all that stress took hold, I browned a small piece of beef in my cast iron skillet and got the crockpot fired up.  I really thought it was a small piece, but turned out it was WAY too big for the pot. 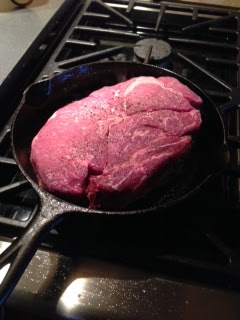 I had to chop it up before throwing in lots of spices and some mushrooms.  By the time I was done with the sawing job, it was smelling mighty good.  Dinner in a pot!!  What could be better!!  Two successes in one day ... it really WAS delicious.  Unfortunately, I have enough for ten people.  I think that meat expanded to twice it's size in the pot!! 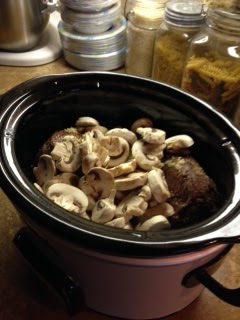 I'll freeze most of it, to go with the ten portions of turkey tetrazzini and the eight portions of pesto pasta I already have in the freezer.  As you can imagine, by about the fourth dinner, I'm pretty tired of pasta and pot roast!!

Today I'm going to see what ELSE I can saw up ... and maybe I'll just take another look at that cute little saw on Amazon.