Yesterday was a waiting game .... I spent all day waiting for things to happen!!  First it was the mowers and blowers ... my gardeners who missed Thursday due to the rain.  The curb guy said not to let anyone near the new poured concrete for at least a week.

Jessie, good watch pup that she is, let me know they had arrived, so I gave them the day off.  It was then I saw that all my porch time didn't help one little bit.  SOMEONE had stepped on the curb out front and smashed it on one side.  How irritating THAT was!!!!  At least it's at the far end closest to the neighbor's house (damaged by their kids, no doubt).  From the street side, you can't really tell and I imagine it can be repaired, but it sure makes me MAD!!!

Not a great way to start the day, so I tried to amuse myself with crazy Christmas movies and a 23rd watching of Jurassic Park!!  I can pretty much recite every spoken word now!

With two packages having come in to my UPS mail box ... I know because they send me text messages ... I drove over to get the mail.  One good thing about having a box there, I get to jump to the front of the line.  No waiting games!  Not much of a line with only one person, but before I left, there were 10 waiting for service.  Yes it's the Christmas season!

Wait .. this is funny.  I received a package addressed to my house that had traveled through the same Post Office procedures as my lost Amazon order, and there were NO extra charges.  Not only that, but it had only been one week until delivery instead of six!

Late in the afternoon, I got ready for our annual Bingo Christmas Dinner.  It's nothing special really, we just all show up for the usual Friday Night Dinner, but THIS time we get our food free.  That just added insult to injury last night however.  The service was so bad, we couldn't even get the satisfaction of getting a complimentary dinner in return.

I arrived at 6:00 and took a table with five other people.  You would think they would have added a few extra servers, knowing they would have 40 more people for dinner than usual.  Instead, I only saw two people serving meals to at least 75 individuals.  It's okay I thought ... I'm expecting a waiting game of maybe an hour anyway.

Our order was taken at 6:10 before anyone even sat at the table behind us.   By 7:15 the natives were getting restless because we STILL didn't have any food.  They had served every other table in the building, including the people behind us who showed up late ... and we were starving!!  One person at our table was able to track down the waiter who was wandering around with two prime rib dinners, not knowing who ordered them.

At 7:25, I finally went to the kitchen and asked about our meals.  I discovered part of the problem right there.  The chef fixes one meal at a time.  Not two or three along the line, but ONE.  He got pretty nasty when I asked if our order was coming up, but finally said he was making it right then.  Fifteen minutes later, three meals were delivered to our table of six.  At 7:50, I finally got my food.

I don't know if they lost the orders or if the waiter just took everyone's request at one time before turning them in (after he put ours on the bottom).  If this were a real restaurant, I would have gotten some satisfaction by walking out with a free meal.  I suppose I can't complain because this food was free too, but I AM going to talk to the Kitchen Manager.  We didn't even take a bite, but asked for boxes to go.  It took another ten minutes to get those. 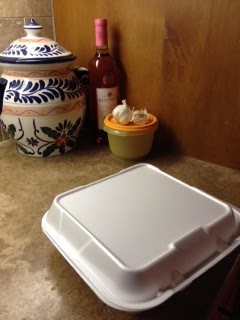 This is not a good way to start the Christmas season.  I've been good Santa ... really I have ... but I'm quickly becoming a Scrooge.  I'm hoping the next few days pass quickly without incident ... or any more waiting games ... because I really don't have any use for a lump of coal!!