Where Else But In The Desert!!

Looks like I'm in the desert, right??  Well I am, but this is a slightly different kind of desert.  This is a desert nursery called B & B Cactus Farm.  I'm not sure why I'm so drawn to cactus ... probably because I was raised in the high desert ... but I just LOVE the stuff, so Patty took me to her favorite vendor. 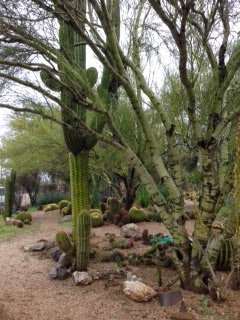 Your first sight is of this gorgeous cactus garden, for which they have won many awards.  They give tours if you are interested, explaining the various plants and trees.  I want one of EVERYTHING!! 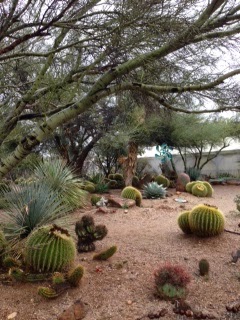 We wandered through the large outside section of plants that have been hardened off, getting stuck here and there with needles when we got a little too close!!  It didn't take me long to pick up my first purchase before we headed to the inside buildings.  So much about cactus that I never knew!!!  The specimens here are spectacular, to say the least!!  This building had many planted in large pots that I would love to purchase, but unfortunately, they are too large for the RV.  I thought about it, but I seriously can't fit anything else in the bays!! 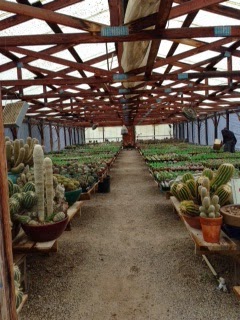 Further down the line are all these beauties!!  There's more cactus here than I even knew existed!!  Many of these are ones my black thumb has decimated in the past, but my plan is to gather every single piece of information I can about growing them so they will survive!!  I'm on a mission!! 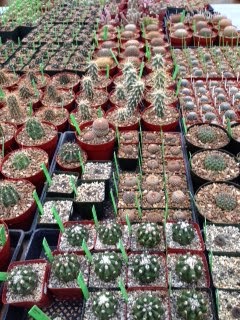 Someone said yesterday that the cactus I posted looked like a fishhook.  Yes indeed it was, I found out today.  Not this one though ... this is a beautiful type of aloe I think, recently in full bloom. 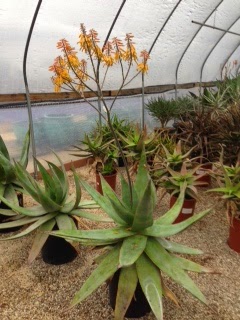 I've heard of "Desert Rose", but thought it was a person.  This amazing Desert Rose is NOT for sale, but was spectacular with many pink roses blooming at the end of each stick branch. 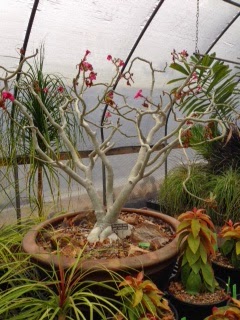 In the back, there were more Desert Roses blooming with variegated flowers.  No leaves, just branches and flowers!! 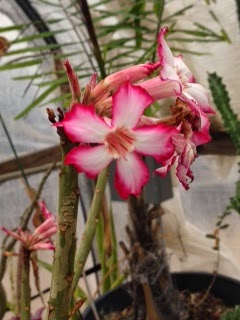 After talking to one of the owners for probably 20 minutes gathering information on how to keep these babies alive, I picked these three.  The big triple cactus is a Golden Barrel, hardened off in the outdoor lot.   The other two are too hard to pronounce, but here's something interesting about keeping cactus alive.  See the green tag?  Other than the name, it's on that side of the plant specifically to tell you which direction to keep it facing.  If you accidentally turn it around, too much light or sun on THAT side can kill it.  Who knew that important tidbit of information??  Maybe that's why I've killed so many!!  With a bag of cactus mix WAY too big, Patty and I headed home in another downpour! 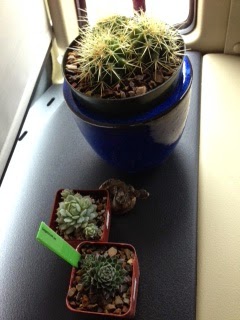 It took two tries to repot these two babies.  The blue lip around the pot is deceiving ... it's NOT a lip, so when I picked it up, I dropped the entire thing on the ground (only a couple of inches) and everything tumbled out.  It took another 15 minutes just to replace everything, including every tiny rock I had picked up from the driveway to cover the soil.  I have no explanation for the baby rattlesnake ... it just seemed perfect for the pot!! 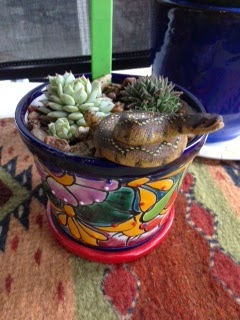 Eventually, I'll repot this barrel cactus in the blue pot.  Since it's used to the outside, I placed it on the ground beside my door.  When the downpour started again, I got soaked placing it underneath a slide so it didn't drown.  There's a trick to watering them also.  In two to three weeks I will stick a small stick down into the soil and leave it for 5-6 minutes.  When you pull it out, if it's damp ... no water.  If the stick is dry you can water it.  I'll let you know how they fair .... keep your fingers crossed!! 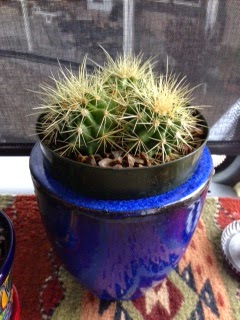 It rained steady all afternoon ... again ... and puddles started to gather outside when I received a flood warning on my phone.  It won't affect us since we are at the top of the hill, but people downstream better watch out!! 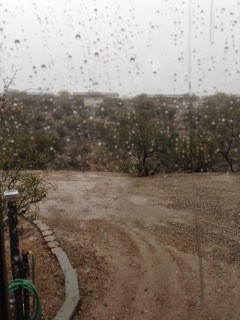 AND it rained all last night!!  It's expected to keep up until late Sunday night.  Hmmmm maybe we should call Patty and Dan's son Mark and ask him to bring the boat over!!!
Posted by Nancy Kissack at 6:26 AM