Good morning from windy 40 degrees (feels like 16) Arizona!   That's okay, it's better than the dense fog at the other house.  Truthfully, the fog is nothing like it used to be in the old days.  Isn't that true about everything??  We literally drove with our heads hanging out the window trying to see the white line and hear any approaching vehicles.    Thankfully there is no fog here!!

So here's the skinny on the humidity.  I received this lovely ThermPro gizzy in the mail so I would know what the humidity is in my house.  I didn't want to get it so high there would be mold.  Well let me tell you, there's NO chance of THAT.  See the SAD face???

Actually, this is after running the humidifier for four hours.  That's about the longest I can go in one day if I want to have any money left in my account after buying distilled water.  It has been running between 20 and 30%.  In fact, I don't think it EVER made it up to 30.

Still, it's better as far as getting shocked.  I just go around slapping everything really hard before I touch it.  Sometimes it even works. 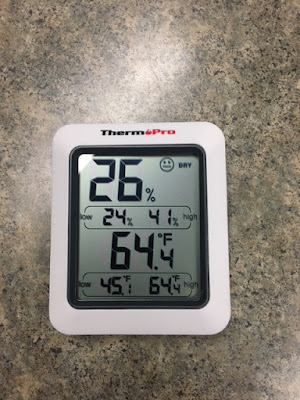 I spent most of the day watching the political crap.  It just amazes me how the news channels can skew stories so badly.  I'm part of a group on Facebook.  They actually went to the Capitol.  On the way, they saw two busloads of Antifa people (they sent us pictures), escorted by the DC Police, park nearby.  When they got off the bus, they handed out Trump flags and headed straight for the Capitol.  They were the ones causing all the trouble.   Those news stations who say it was Trump protestors should do a little more research before throwing out accusations.

Hopefully ALL of them will be arrested THIS time.  It's funny there was NO outrage when they did that in Portland and Seattle where the Police were told to leave them be, but hear the outrage now.

Okay, I'm done with that.  I'm turning off the television, especially in light of the Hallmark Christmas movie channel disappearing.  There's nothing left to watch.

So what better way to spend the afternoon than with another experiment in culinary skills.  What about some homemade pizza?  This should be a cinch, right? 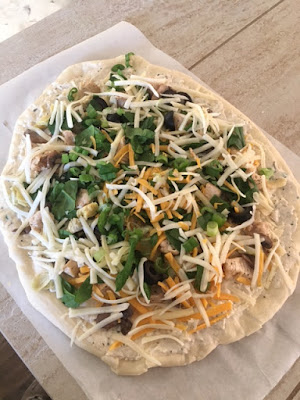 Sadly, I think we are more like Lucy and Ethel in the kitchen.  Patty's words, not mine.  I am of course a professional chef!!  I knew that would make you laugh!!
I made the dough and Patty whipped up the best tasty white sauce, as we chopped and hacked through numerous vegetables.  Once in the oven, we watched in horror as the dough swelled up like pan pizza without the pan.  OH NO!!!!!  This is NEVER going to cook in the middle.  Patty checked the 425 temperature.
I must say it did clean out the oven quite well as black smoke poured into the kitchen.  Yes it took a few minutes before we could see again, but now she doesn't have to clean said oven. 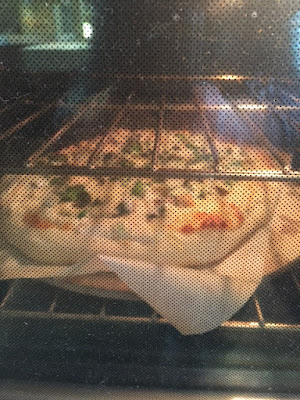 TA DA!!!!  It's okay, it's an experiment Patty kept saying.  I had already volunteered to hit up Arizona Pizza Company for dinner.  I apologized to Dan who is a pizza connoisseur as we cut it into slices.  The chicken, artichoke, olive, onion, spinach pizza turned out to be quite tasty.  It was just that 1/2 inch thick crust that we left on our plates that wasn't up to par. 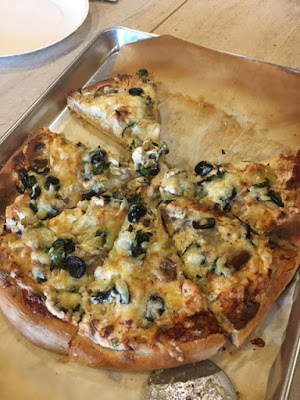 Next time, if there IS a next time, we'll make that crust paper thin.  It couldn't be THAT bad since I brought a few slices home.  So much for the EXPERIMENT!!

I'm still have trouble finding images and videos in this computer.  It's so much easier in the old one.  So I THINK this is the big buck coming back for a long drink.  I'm just so surprised they are out and about at night.

Today I'm taking four quilts to be quilted, which will cause me to be very broke for the next two months.  It's a good thing I brought home some of that pizza.
On the way back, my plan is to hit up Saguaro National Park for a little hike.  At least I will finally have some pictures to show you.  Yeah they will probably be of cactus, but hey, it's better than thick crust pizza!!!

Posted by Nancy Kissack at 5:04 AM