You know those nights when you just sleep like a log in spite of all the trains?  Well last night was NOT one of those.  From midnight on I tossed and turned, dreaming up nightmare after nightmare of furniture falling apart and bus rides (on the wrong bus of course) to nowhere.  I'm feeling pretty beat up this morning, so if I misspelled something, it's because I fell off the bus.

After another hour with my quilting guru trying to figure out why my measurements didn't make the grade (I got an F in reading directions), we figure out how to fix the problem ..... sort of.  This quilt is a little above my pay grade, so we shall see how it turns out.  It may just be a great new Cooper blanket. 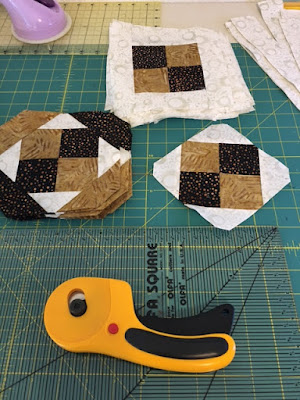 Since most of the local horse shows have been cancelled, even though they are outdoors and you are never within six feet of one another while on your horse, we jumped at the chance to go to this one on private property.
For the first time that I have seen, they had kids volunteer to take flags around the arena.  Most horses and flags just don't mix well.  I can say that from the experience of carrying a flag on my horse Cricket in a local parade on an asphalt street.  Cricket wasn't much into being patriotic and that thing flying around her head in 15 mph winds didn't help her skittish nature.  Someone grabbed the flag, but not before Cricket and I ice skated on the slick pavement into the crowd.
Although one horse did take off and make a slight detour, he ended up back in line for the National Anthem. 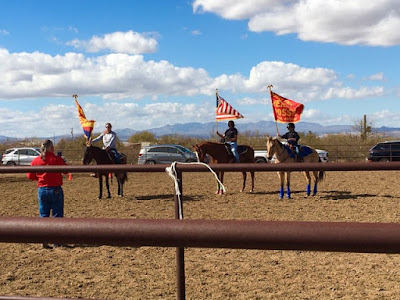 I have to admit it got a little chilly when the sun went behind the clouds, but we hung in there to watch Laila and Max in the keyhole race.  This is all new to Max.  He would rather trot around the edge of the arena looking regal than figure out which side of that pole he's supposed to go around.  For this being the first time, he and Laila did a great job!! 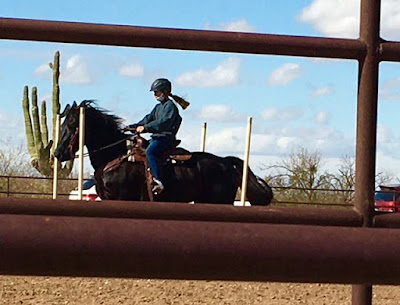 There were a couple of crashes (not Laila and Max) when kids couldn't slow their horses down fast enough, causing the screeching halt that dumped the kids in the dirt.  I can't tell you how many times that happened to me when I was young.  It's a good lesson in thinking ahead.
In the end I had to leave early since I knew the puppies would have their legs crossed needing an outside break.  Sorry for all the bars in the pictures.  There were two sets of interference. 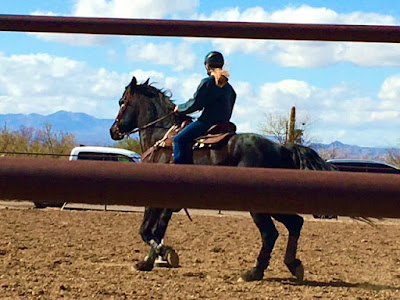 In other local news, my raccoon buddies only show up every four or five days.  Although there were three, this guy seems to be by himself now.  What a hunk!!!  With all the marauding coyotes around, I'm surprised they show up at all.
The weather guessers say there's a big storm coming for the next two days.  Again, possibly snow, although that hasn't happened yet, nor even come close.  I'm battening down the hatches anyway.
Posted by Nancy Kissack at 4:49 AM