It has again been very cold and windy in Southern Arizona.  Being up a little in altitude makes it much nicer in warm weather, but when it's cold, it's COLD.  It makes me not want to do anything but stay inside and snuggle with the puppies.

In a mammoth effort to NOT sit on the couch all day, I spent some time finishing up this quilt top.  Much as I would like to take it to the quilters, there's not enough of that green stuff in my wallet for that to happen.  It's also another good reason to stay home ... I'm not burning costly fuel.  Hopefully I will be able to get it done by NEXT Christmas!! 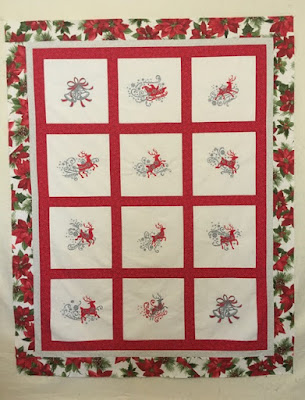 On the good news front, my phone seems to be working okay, although there is an occasional glitch.  I really have to keep an eye on the battery indicator.  Yesterday it went ballistic, giving me all kinds of weird notices, when I finally noticed the teeny tiny red indicator.  It was almost dead, as in never able to be resurrected.  After several CPR moves with the power cord, it finally sprang back to life.  Whew!  That was a close one.

With no exercise and so much sitting, I decided to stop at two meals a day.  Lunch was prepared late in the afternoon.  What?  It's another burger!  I forgot to check what was available and change up the menu.  No matter, I cooked up the onions (yummy), dumped a nice chunk of cheese on the burger and whipped up chipotle mayo.

Who knew that mayo could be so tasty?  Yes I should have tried to take some of the chipotle powder out of the mayo as I dumped in WAY too much, but I was sneezing so hard from opening the package, it couldn't be helped.  Apparently I'm allergic.  Woohoo that's rather HOT!

However, it tasted WONDERFUL.  I just happen to have a small package of that red stuff ... I think I'll make my OWN from now on. 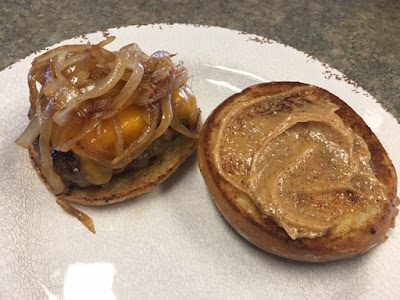 What you see above is the PHOTO version.  Some people actually make a living being food specialists, setting up photo shots of all that yummy stuff you see in magazines.  Of course many times they use things that aren't edible to make the picture prettier.  At least I used the real ingredients.

Behind the scenes however, you will find an entire sink of dirty dishes and the REAL plate used in this particular case.  This way I don't even have to WASH that pretty plate above.  I have to say, except for those several pieces of gristle I ran into, my taste buds were very. happy campers.

In case you were wondering, there were loads of potato fries to be had, but I wasn't feeling it.  It's all I can do to get THIS much food down.  I'm saving those for another day. 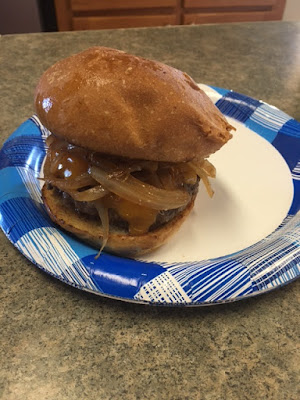 I actually did not sit ALL day long.   I did a few minor things on the motorhome, like fixing that slide lock on one side.  When I discovered I was out of silicone spray, I made a quick trip to Walmart for a replacement.  It was a dumb idea.  Not only did they not HAVE it, the two guys I asked didn't even know what it was.  You know, it's kind of like WD40.  Where do you keep that?  The answer was What's THAT?.  I drove back home empty handed.

In order to get SOMETHING done, I really did get a little exercise by steam cleaning the kitchen floor.  This is the site of puppy prints, doggie slobber, pieces of dead spiders and of course remnants of food I have dropped .... THREE SECOND RULE.   It's all spiffy clean now, which will last all of two hours. 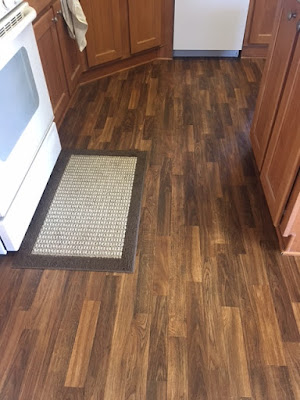 The rest of the evening was spent snuggling up to my "kid", who wants to make sure NO ONE touches his fish.  He's so darn cute when he sleeps and snuggles up, I can't be mad about all the puppy slobber!! 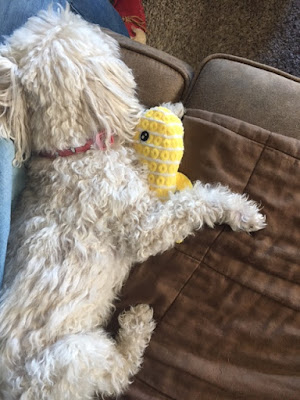 I probably showed you this video previously, but he's such a beautiful boy, I had to post it again.  This time he's not showing his butt quite as much.  What a pretty baby!!

Today is begin to pack day.  I have to put back some of that stuff I spent hours cleaning out of the motorhome so I will have something to eat and something to wear in Yuma.  I won't be there long.  This is a quick trip to visit friends and run across the border.  I'll be back in no time!!

Posted by Nancy Kissack at 4:55 AM