A Tinge Of Madness

I think I've finally gone over the edge into madness.  It's amazing how having a computer makes you just want to smash it with a big sledge hammer!!

So here's my workspace for the entire day.  I tried, unsuccessfully, to transfer data from the old computer to the new.  After waiting on hold for 35 minutes, I finally got someone from Canada (no offense to Canada).  I told her what I wanted to do and she actually repeated it as she typed it in HER computer, then she read to me how to accomplish the transfer.

Uhmmm I could have done that.  Needless to say it didn't work.  After three hours it got hung up and refused to complete the task.  I tried to remain calm.  Not only was there nothing on the computer after FOUR HOURS, but it completely erased every setting I had already changed for my computing pleasure. 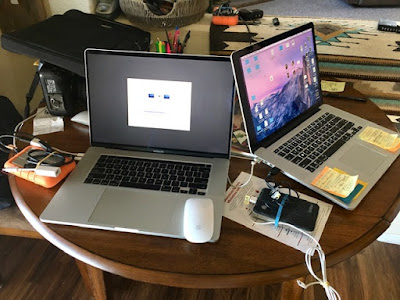 Why am I doing this here instead of making an appointment?  Because every Apple store in Tucson is closed, as in lock the doors Sally, we're OUT of here!!  The alternative is to call ... again.  And so I put my trust in Apple and made the call.  A slight tinge of madness set in the back of my brain as I heard the recording exclaim "high call volume".

I put my phone on speaker and tried to occupy my little pea brain before it exploded.  59 minutes later, I got level one again.  I explained how I needed to go up to the top level in the Apple Elevator before I would taste the flavor of success.

Level Two knew exactly what I needed.  We opened the file, copied, pasted and waited.  FINALLY I was getting somewhere as folders popped up on the desktop.  YAHOO!!  I did a little happy dance.  Too bad it was early in the game.

At last we transferred the pictures ... 39,567 of them.  That took an hour as I waited patiently, knowing it was all going to be okay.  OR NOT!!  I jumped off the elevator at the twelfth floor and hung up the phone.  Eventually it was time to open the files.  Depression and madness hit quickly ... kind of like when I got bucked off that horse and drug across the arena.  Not a single picture file would open.

Not only that, but absolutely NOTHING works the same on that computer as it does on this old one I'm using to write this blog.  It's going to take me hours to figure things out, number one being to change the entire screen to a size of type that is readable.  I need binoculars to read even the top line.

But wait .... it's gets even better.  While working on that, I got an email from my internet provider saying I had gone over my limit.  In the two seconds it took me to realize the upgrade ON THE NEW COMPUTER would take 12 gigabytes and I only have 10 available, it used up THREE, causing me to fall off the cliff.

The tinge of madness grew into a monster instantly.  I called and got the "high volume" scenario again, so I left a message for a callback, in 15 minutes they said.  Two hours later, the madness turned into full blown "crazy mad old lady" that called again, this time to wait 49 minutes for a person to answer.

If it weren't for the fact that this is my only connection to humanity, I would have thrown EVERYTHING in the garbage!!  The poor kid did his best, making a note in the file not to charge me since today is the roll-over day.  Of course he tried to up my mileage limit, but that will be $20 more a month if you please.  Add to that the $20 a month I will now have to pay Photoshop in the Cloud (which I hate) in order to open ANY of my images on the new computer.  How irritating.

SO .. in the light of madness I'm currently experiencing, here's another nighttime visitor that really surprised me.  There is another better video, but for some reason it doesn't want to upload.  This guy drank for a full five minutes before wandering off.  He has a great rack, but it's hard to see in this video.

I will now delve further into the mind of madness as I try to RESET all those things on the new computer that I already spent two hours working on.  This new computer may not be a good idea after all, just like carrying the ice chest and money box on the back of that horse (I ran a cutting horse clinic once a week) which caused him to go crazy when the change made noise.  That ended with a week on crutches.  We shall see how THIS week ends.

Posted by Nancy Kissack at 4:40 AM