OOPS!! I Did It Again

Sunny Arizona was a tad bit warmer yesterday.  No it wasn't, I'm just trying to make myself feel better!!  It's been in the mid 30's at night (but not freezing, so that's a plus) and mid 50's during the day.  Towards the end of this week however, we should be up to the 70's.  YAY!!

It makes it hard to want to go outside and actually "work" when it's chilly, but yesterday morning I put on my jacket and set about replacing these window weep hole covers.  Tiffin is nice enough to keep these in stock, mostly because they know they fall off just looking at them!!

They should snap right into the slot, but alas, the slot is too biggeth!  Is that a word?  Probably not.  Anyway, I cleaned off all the old glue, since it's the same ones that keep disappearing over and over, then grabbed my trusty tube of silicone.

In no time it was stuck in place and I was covered in goo up to my wrists.  No worries about all the bits that got stuck to the ladder.  I'm sure it will wear off at some point.  As soon as it dries, if it dries in this cold, I'll be off to Yuma for a few days. 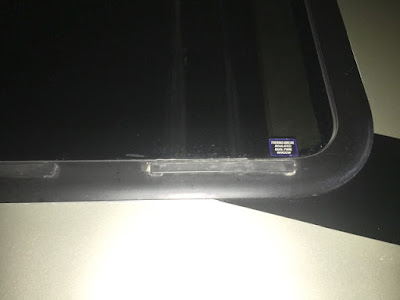 In the meantime, Every Plate is again sending food to my table.  This week's three meals for two people only came to $20, part of my re-upping deal.  This always makes about ten meals for me, so the price isn't bad at all.  I even get to pick which meals I want, although there is an additional price for the really good stuff, like steak.

This one is called hoisin pork sloppy Joes.  Didn't much look like sloppy Joe's to me, but hey, who am I to judge.  Right off the bat, I was in trouble.  It called for ketchup, which I left in California.  What to use, what to use?  All I had was barbecue sauce.  Pretty close, right?

I shredded carrots, cut up Persian cucumbers (which I've never seen in any store in my life), grated lime peel and added a tad of sugar and the juice of one lime.  Hmmm ... this is not bad.  How could that be?  It sounds terrible!  I browned the ground pork, proud I didn't set off any smoke alarms, and dumped in the hoisin, soy sauce, sriracha and barbecue sauce. 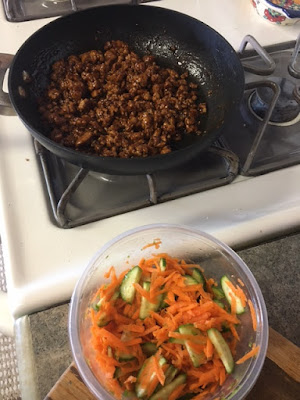 With a toasted bun, it looked rather pretty, but my taste buds weren't feeling it until I took that first bite.   Yao!!!!  This is mighty tasty!  Who knew you could have carrots on a hamburger of sorts!  Oops! I did it again.  I actually made a tasty lunch from some weird ingredients! 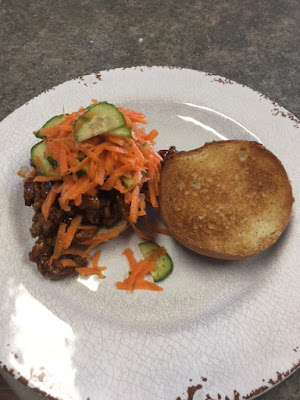 Next I was off to check out the Chance granddaughter's horse which was coming over for a bath.  Horses going to shows need to be pretty.  Sadly, I forgot to take a single picture, so here they are from a few months ago.  I blurred her face since I didn't ask permission to post, even though I know they would say yes. 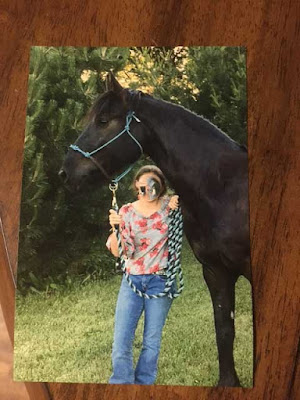 Next up, a quick trip to the hated Walmart.  They carry DEF, I'm out and it's CHEAP.  Online, they had this Super Tech brand on sale for $6.98 as compared to the other cheapest at $12.50.  I ordered one, since that was all you were ALLOWED at that price.  I filled out my order with the more expensive one.
When I went to pick it up, I wandered back in the store first, to see what other brands they had.  There it was ... an entire shelf of this stuff with NO limit on purchase.  I picked up three (should have gotten ten) and went up front to cancel my other order.  It worked, as in $21 versus $32.  With my quilting bills, I need to save everywhere I can.
To make it even better, this is MADE IN THE USA and NOT China.  So if you need DEF, hit up Wally World. 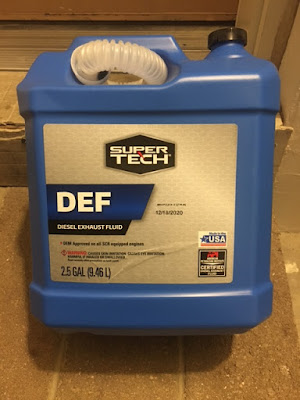 In another OOPS! I did it again, I finished off the last of the ham by making another pan of Mac 'n cheese. Most of this one will be frozen for the trip to Yuma.  I could eat the ENTIRE PAN every day of the week.  I'm hoping to have more OOPS moments this week as I cook the next two Every Plate meals. 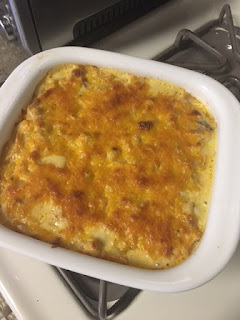 That was it for the day.  I've checked the game camera for three days in a row now and found absolutely nothing but a few branches waving in the wind.  How weird that not even the bunnies have been out.  It's like POOF ... they are all gone.  Maybe they know something we DON'T!!!

Posted by Nancy Kissack at 5:06 AM