We have had a winter storm warning in Arizona for the last three days.  So far not much has come of it other than really gray skies and a little rain, followed up with Mother Nature in her new dress.  It began with a few white clouds sneaking over the mountains with a drop or two of rain.

That's one of the trains that passes by many times a day.  Like your rear view mirror, things are much closer than they appear in this photo.  Scheduling must be having a glitch or two as many of the trains now stop and just sit, sometimes for a couple of hours before lumbering off around the corner. 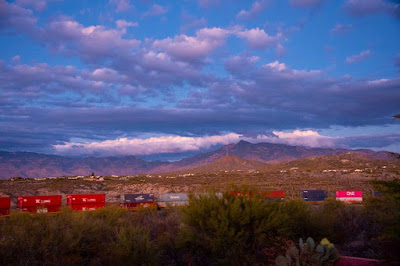 It was football playoff day, although I had sworn off watching anything NFL due to their thumbing their nose at our flag and the national anthem.  I'm not down with that one little bit and am glad Kaepernick doesn't have a job any more.
Somehow I thought they would start at 11:00.  That didn't happen, so I occupied myself with the quilt, checking out the window every now and then when I heard raindrops.  Ooohhh Mother Nature, like any clothes happy woman, changed her dress.  I just kept on sewing until the game began.
At least on this day I didn't see anyone kneeling, at which point I would have turned it off.  I'm not supporting any of that nonsense.  It was no surprise that Tom Brady kicked butt, although I was hoping Green Bay would get a chance to hit the big time again after so many years. 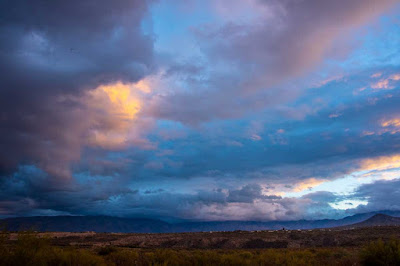 Suddenly I noticed how yellow my room was getting.  I looked outside to see Mother Nature had AGAIN changed into a magnificent new number, guaranteed to impress.  It looked like you could just touch the clouds. 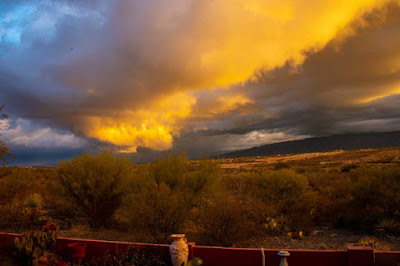 For the SECOND football game, I was invited over to the Chance Ranch for some of Dan's beef stew.  Dan makes a really MEAN pot of stew!!  Patty asked if I could bring biscuits.  BISCUITS?  Gosh, I haven't made those in years ... and I mean YEARS!!
I checked for ingredients.  Okay, sure, or at least I would give it a try.  Patty said Martha Stewart wasn't coming, so any biscuit would be good.
My dad was the biscuit maker extraordinaire in the family.  People would come from miles around to have his dutch oven biscuits.  Maybe some of that rubbed off on me.
NOPE ... NO it didn't.  I even tried the latest and greatest trick of grating frozen butter into the flour.  What a mess THAT turned out to be.  I had bits of butter scattered all OVER the kitchen.  Funny, the dough didn't seem all puffy like my dads.  It was more the texture of pie dough.
I'm thinking this isn't good at all, but I persisted.  They came out rather flat, as in not even 1/2 inch thick.  They tasted okay, but honestly, if you put enough melted butter on ANYTHING, it will taste okay.  I just couldn't figure it out.
When I got home, I had a tiny thought.  I checked the date on my can of baking powder.  Hmmmm 4/26/2019.  I think I see the problem here.  My rising agent was ancient.  No wonder they didn't rise.  Now of course I have to buy a new can and try them again, just to prove I CAN make biscuits. 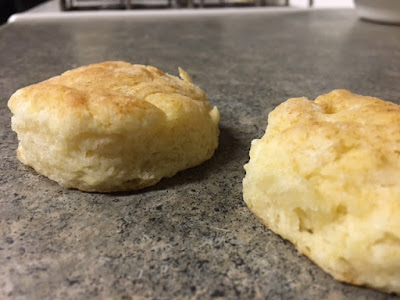 In the meantime, here's a video from a couple nights ago.  He's certainly suspicious and almost standing on his tippy toes to see and hear.  I sure love watching these guys.
We watched the second game and apparently now Kansas City will be playing Tampa Bay in the Super Bowl.  I noticed how they said ten times that only 7,500 VACCINATED people would be allowed in the arena.  I guess I won't be going to any football games.
In the meantime, I placed myself on the hook for chicken wings for Super Bowl Sunday.  I'm heading to the store, then THIS time I'm making some in advance, just to hone my skills.  Who am I kidding, I have no skills in the chicken wing department.  It's going to be a first!!  I'll let you know how it goes.

Posted by Nancy Kissack at 4:51 AM