Across New Mexico and Into Colorado

What a day ... what a day.  I'm doing my very best to be upbeat, but yesterday was a bummer.  It started out with the usual nervousness ... getting fuel.  In spite of their name LOVES, they are not so friendly to RVers.  No problem however, I'm off into the smog filled valley of Albuquerque. 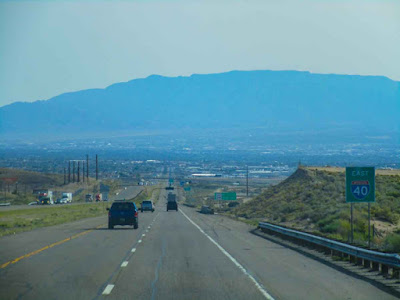 I was hunting down Hwy 25 heading North.  FOUND IT!!  Feeling pretty good about this drive, I was surprised when I hit all the construction work.  Might I say New Mexico isn't the best at road construction.  There were so many big grooves in the highway to go along with the three inch high gobs of asphalt, that it was difficult driving.

When my tires got stuck in those grooves, I had a hard time getting it out JUST as that big truck tried to pass me.  Yup ... right into his lane.  The corresponding OH CRAP almost wiped out my Jeep on the concrete wall on the right.  INSTANT migraine. 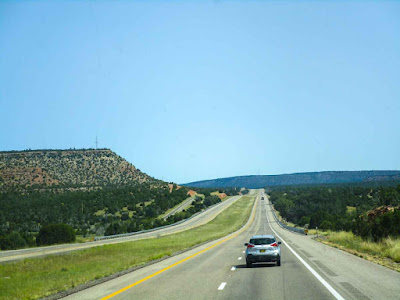 It's okay, I'll just hit the next rest stop to pry my shoulders down from my ears and take some aspirin.  Trouble is, there ARE no rest stops in New Mexico.  I finally pulled over in a wide spot and tried to relax.  There were lots of ups and downs crossing the gullies, with lots of gear shifting.  That was a good thing because it kept me awake. 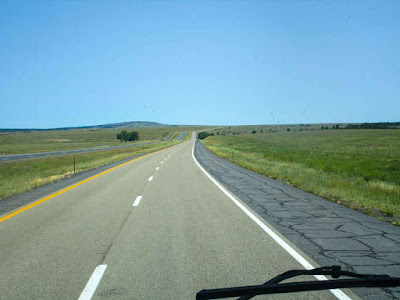 Pretty soon I was seeing pronghorn antelope on both sides of the freeway, but I couldn't get a single picture.  My camera doesn't seem to want to focus.   I've no idea if I'm in Colorado or New Mexico because I never saw a sign.

I'm looking for an RV Park in Raton.  Too bad I read that review just as I was leaving Albuquerque.  It wasn't good.  Neither was the RV Park as I drove by.  What to do, what to do.  I definitely need fuel, so that was my first priority. 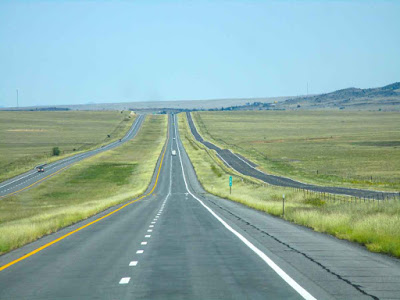 At long last there were blue skies with a few clouds.  MUST be Colorado.  Still there was no place to pull over and come up with a game plan.  Trying to navigate while driving is difficult at best.  I finally told my phone to call my final RV park destination to see if I could get in.  YES!!  I have a spot. 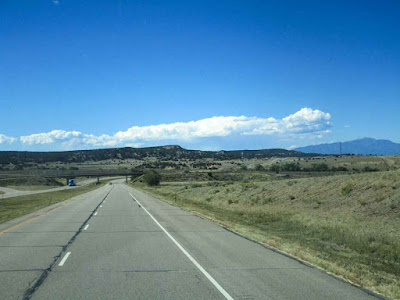 But first ... back to fuel.  At long last in a short pull-out, as my phone died a horrible death, I found a station in Trinidad.  Trouble was I had just passed it before stopping.  RATS!!  Next up ... Walsenburg.  There were two exits.  When I didn't see the fuel station at the first one, I took the second.  WRONG!
I ended up pulling into someones circle drive to turn around.  There was just no place to go.  By now I'm exhausted after driving six hours, but back on the freeway I went and what should I see but three MORE exits!  YAY!!  Fuel ... at a very small station with very nice people.
At last I was on the final leg.  Sadly, it was another hour of driving before hitting Hwy 50 West that has a stop light every mile.  Eventually I landed in Canon City, but had no idea where the RV Park was.  With my phone dead as a doornail and my shoulders back up around my ears, I just kept driving. 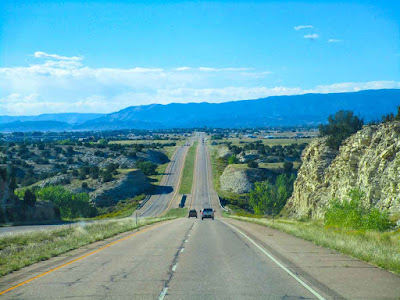 A dinner invitation followed ... barbecued pork chops.  How could I turn THAT down!!  It was the perfect ending to a rather crappy day.  At this point, I'm parked close to the road, so sleep has escaped me for the third night in a row.

They are moving me to my "premium" spot this morning, located down the hill.  I can't wait.  Pictures will follow tomorrow after three naps I have planned for today!!

Posted by Nancy Kissack at 4:25 AM