THREE In One Day!!

As you can see, I've included other images from the mission so the guys who aren't interested in quilting will have something to look at!!

First stop, the Desert Quilters Patch on Country Club Road towards Sahuarita.  I'm not sure if that's North, South, East or West.  I seem to get a little turned around when in Tucson because the mountains are on the wrong side!  I picked up this pattern for a boot quilt, with all the proceeds going to the Southern Arizona Community Food Bank.  That meant I needed lots of different "boot" fabric.  That turned out to be much easier said than done!! 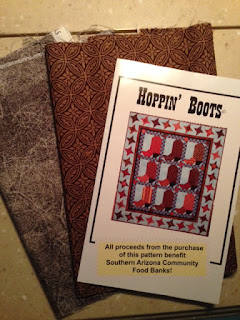 Not to throw you off, but the fishhook cactus are blooming in the desert, giving these beauties crowns of gold.  The crowns eventually turn into sharp hooks that I'm sure you could catch fish with, if there was any water in the desert!! 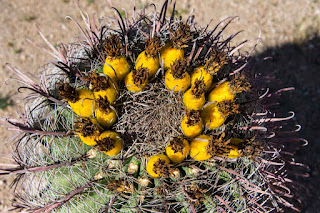 The second stop was Arizona Vac and Sew.  We followed the GPS this time and even though it forgot there was an A and a B exit, after wandering around the desert, it finally got us back on track.  We didn't spend much time here because I would have walked out with an embroidery machine for a measly $7000.  YIKES!!!  That thing better be able to cook breakfast for that price!!

The third shop was Quilters Market on Speedway, the finest shop in Tucson in my opinion.  They were even having a customer appreciation day.  There were bags and bags with ribbons attached.  Pull the ribbon and you get what's in the bag ... and you didn't even have to buy anything!  I got patterns for fabric bowls and a fat quarter ... Patty got a quilt pattern book and a fat quarter.

Since this book has several nice patterns and I have several jelly rolls at home, it seemed a perfect fit. It came home with me along with a couple more pieces for my Boot quilt. 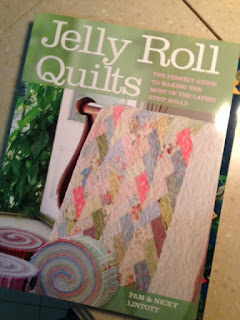 So much for an entire day of quilt shop hopping!!  This is the little mountain next to the Mission, named Martinez Hill.  Jose Maria Martinez married his wife and raised a family, probably in Tubac Sonora and was in charge of the Presidio in Tucson.  Ten years after his retirement, his family was attacked by Apache Indians who took Tubac back.   Martinez was forced to move closer to Tucson.  He was granted land by the Indian Chief in San Xavier that was close to or included this hill, where he raised cattle until his death.  There's some very interesting history around if you just dig in the sand a little. 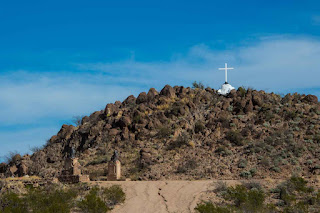 One of the doorways in the museum of San Xavier Mission has been restored to it's original beauty.  I think I just might try this in MY house. 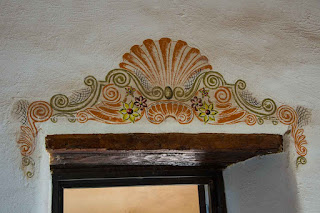 There are several handmade iron gates around the property.  I imagine this was quite a feat without an acetylene torch!!  This mission has become a pilgrimage site for many believers on foot and on horseback.  Can you just imagine how amazing it would be to attend a festival here? 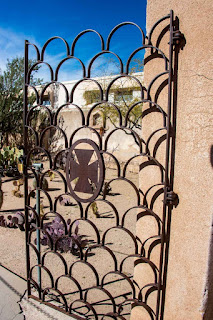 The original ceilings still exist ... hand cut wooden beams covered with small branches, then layered with adobe and dirt.  This insulation seems to work really well ... it's very cool inside the buildings. 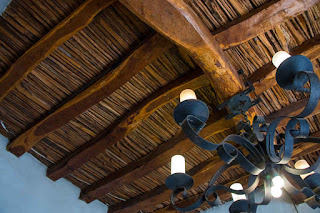 Back at the ranch, Dan rode in on HIS horse, the Harley breed, and we immediately drove off into the sunset for another Supreme Burrito at Rancho Rustico on Houghton Road.  GREAT food!  I apologize for the bad picture ... I had already eaten half of it when Dan reminded me to TAKE a picture.  The good news is that I have enough left over for TWO more meals!! 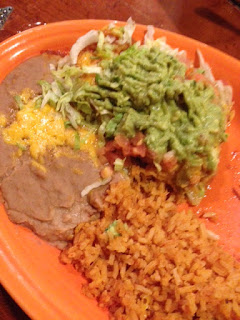 Once again Mother Nature didn't disappoint when she threw out a beautiful sunset, almost a daily event here. 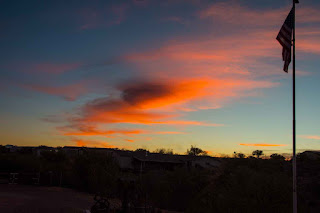 I continue to look at homes, having found several nice ones for MUCH less than the purchase price of my home.  I have found that you have to watch out for things like well agreements, very long dirt roads and HOA fees.  If you aren't looking for a place where you can park a motorhome, you certainly have lots of possibilities at VERY reasonable prices.

With all our running around, I think today may be a stay-at-home and lay around day.  Or maybe we'll take a drive to Tubac!!