WE SURVIVED 2015!!  YAY!!!!  I hope this blog finds you lounging around the house in your pj's with a big cup of coffee to combat the party last night!!  Be sure and check out the Rose Parade on television and view the handy work of a great group of volunteers.

Here at Indio, this group of volunteers doing all the setup for the rally had a nice dinner at 6:00, with many bringing their party hats and horns.  I have to say it was one of the tastiest pot luck dinners I've ever been to.  Everyone brought their A game with the food!!

BBQ'd ribs and garlic bread were the main stays ... yummy fall off the bone delicious ... followed by an entire table of desserts.  It was seriously nice to meet so many of the people I work with here. 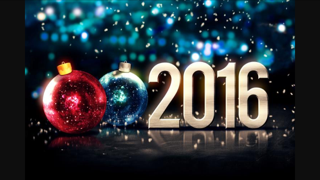 By 7:30 the building was practically empty.  I thought maybe they just weren't the party animal type, but on second thought, I figured they all had to be up early today to keep the rally setup going.

I spent the rest of the evening (WAY too full) on the couch with the puppies, who didn't even make it to 8:00 pm.  It was just Jonathan and I as we watched the latest and craziest celebrations around the world. 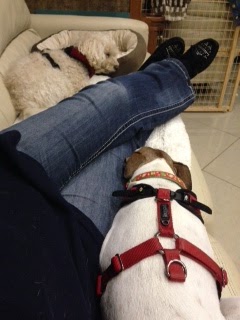 By midnight I had one eye open and the other shut!  I took this picture just to prove I stayed awake.  All a big fat lie though ... I went to bed at 10:30.  I picked up a heated mattress pad yesterday so I would finally be warm at night and get some sleep.  No electric blankets around this area ... which I much prefer ... but I wasn't going to be picky.

This was the 9:00 New Year in New York City!!  I WAS however, rudely awakened at 1:59 AM by someone sending me a Happy New Year text message.  So in my book, that counts as being up!! 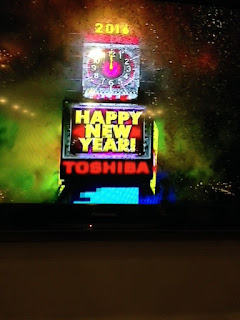 Welcome 2016!!  I hope you bring all my friends, both RV and Facebook, the best year yet, filled with lots of love, joy, good health and good times!!