The Last Balloon, The Last Sunset

Don't you just love this little face??  This is one little puppy I could take home with me.  I was finally able to thaw out yesterday as I hit the generator switch about 7:30 am.  After a leisurely morning, the Chance family wanted to return a rug they purchased for a larger one. 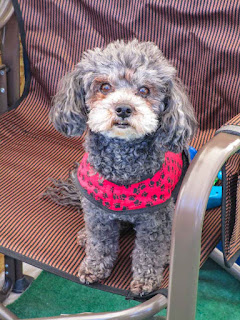 Surprisingly, the vendor agreed, I'm sure because it put a little more money in his pocket.  From there we stopped in at Rice Ranch.  Although it has become more of an RV park than a flea market, there are still lots of little booths here selling weird stuff, from salves and ointments to rugs and RV supplies, and I'm sure you could even get a little wacky tobacky if you asked.  Nothing seemed to flip my skirt today however, and I went home empty handed. 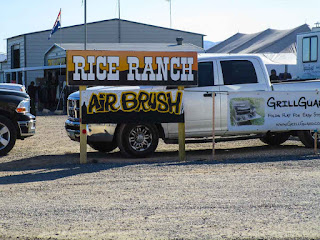 A short distance further and we arrived at the Arroyos, a tiny subdivision of pretty cool houses, all with motorhome garages or covers.  The price was right, running about $235K for 1100 sq ft, two bedroom two bath, but it's all about location, location, location.  This is Quartzsite ... 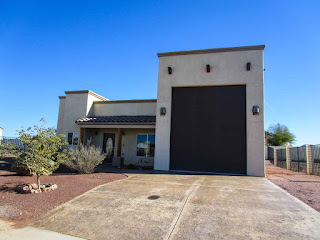 Home of 120 degree weather in the summer and terrible traffic in the winter, not to mention no quilt shops .... no shopping at ALL unless you're into fleas, which I'm pretty sure I saw on that guys head!! 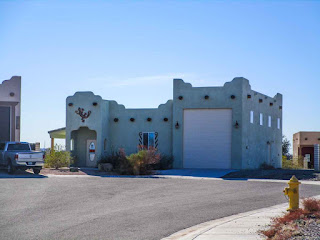 It was a nice lazy afternoon when I finally quit playing with Cooper.  All three of us took a nap on the couch before I heard the dinner bell.  Dan barbecued two pork loins ... YUM ... followed closely by barbecued zucchini, salad and broccoli.  It was delicious with a capital D. 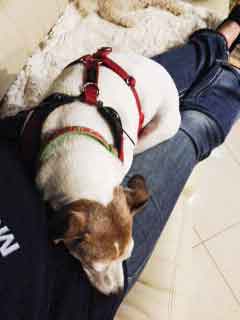 After Patty's launch into the sky, Dan picked up several balloons for granddaughter Laila and decided to put one more wish up.  They are pretty large as you can see.  Dan's trying to light it while Patty holds it up ... not an easy feat to be sure. 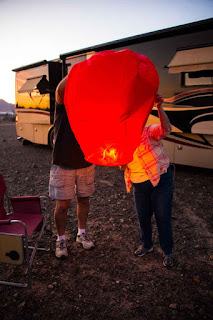 Finally lit, it took off into the wild blue yonder, lifted by the heat from the wax square fire.  This one even had sparklers.  Not really GREAT ones, but sparklers none the less. 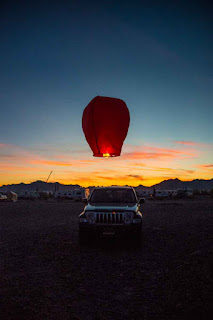 Up, up and away it went in the opposite direction as the last one until it caught a breeze.  In a few short minutes, it was completely out of site, heading for the mountains Southeast of town. 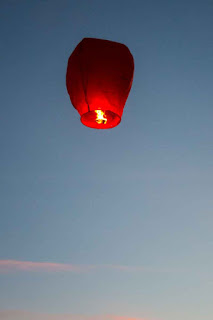 As I've said before, the sunsets here are beyond words.  There's every color of the rainbow and they change from minute to minute. 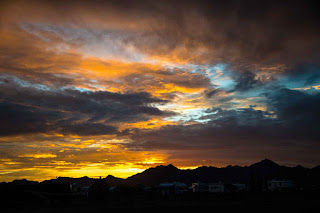 I think I could get used to seeing something like this most every night. 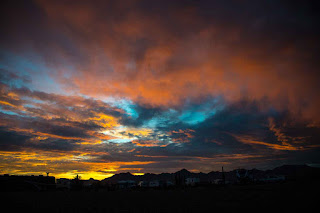 Yes they do actually have sunsets where I'm from, but they are nothing like these, and few and far in between. 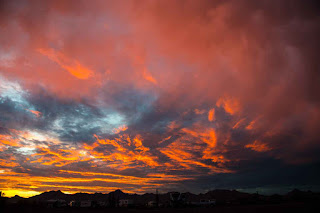 For information purposes, we checked on several types of AGM batteries, with Lifeline being the top made-in-the-USA brand.  The bad news is that I will have to win the lottery to pay for them.  Dan thinks my batteries are good for another year, which will give me time to save up the $1800 it will cost for six ... yes six house batteries.  Those household refrigerators take up a little power.  I could install solar, but the price tag on that just to spend a week in the desert once a year would never have a break even point for me.

This morning after I thaw out, we will pack up and head further East to the Last Chance Ranch south of Tucson.  It's time for some big city quilt shops.