The headlines were big and bold yesterday!  You know they were talking about me, since my track record leaves a lot to be desired!!  It started off with good intentions, ending up with the good, the bad and the ugly!!

Previously, while cleaning out our old quonset hut, I discovered this family trunk my mom had saved.  They make great end tables and this one is BIG, so I had the scrap guys help me load it in my truck.  Unfortunately when I got home, I had no one to help me get it OUT.  I did great until the last moment when I drug it to this spot, stepped on the edge of the concrete and dropped it right on my left foot.  OWWWW!!!  That put a quick end to my running, so with nothing else to do, I cruised the pages of my new Cowboy Cookbook, my now black foot propped up on the end table!! 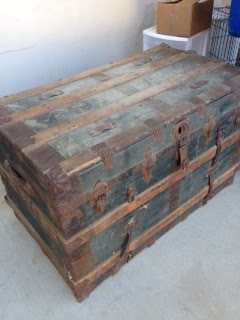 I was pleasantly interrupted by the scrap man once more when he stopped by to pick up the HUGE old riding lawnmower that had been parked in this spot for 5 years.  YAY!!!  The eyesore is gone!!  That put me in an even better frame of mind for cooking .... too bad the good luck ended at the gate. 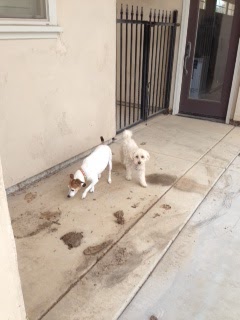 It happens I had every thing for Cowboy Sloppy Joes, even though the recipe didn't sound like the norm, especially when it came to the brown sugar!!  I have to say however, this recipe was a keeper ... a resounding success!! 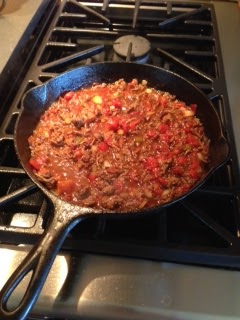 Hamburger, rotel tomatoes with chili, bbq sauce ... it was delicious, so much so that I ate every bite on this plate .. which was way too much food for me!! 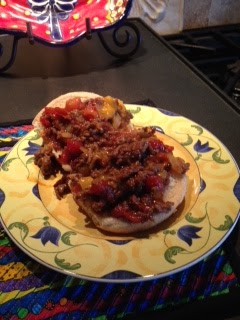 With that success, came the bread pudding recipe.  You know the Westerfields and I are on a mission to find the best bread pudding in the U.S. ... and so far, Mile High Cafe in Jerome Arizona is in first place.  In the meantime, whenever I find a recipe, I HAVE to make it to see if it can beat out Mile High.

This is when disaster befell my little kitchen!!  This recipe calls for a small pan, 8 x 11 ... the one you see in the distance below.  Yes, I realized that it wasn't very deep, like the pan in the foreground, but the ingredients didn't even make it half way up the side ... it should be fine.  The failure here came with the word "should"!!

After 20 minutes in my Breville oven, I decided to take a look.  To my shock and horror, it was overflowing around the outside of the entire pan!!!!  OH MY GOODNESS!!  I grabbed an old potholder, not thick enough to keep the burn off my fingers, grabbed a bigger pan with the other hand and tried to combine the two.  By now I was laughing so hard, when I threw them together, a big chunk landed on the counter, down the front of every drawer to a nice thick sugary pile on the hardwood floor!!

Luckily for me, I caught it just before it smothered the heating element in the oven, so with nothing to clean up there, I shoved in the new bigger pan (at an angle because it was TOO big), as it had another 20 minutes to cook.  It took me all of that time to clean up the mess.  There was no worry about overflowing THIS pan, as it didn't rise even a fraction of an inch after being deflated and recooked.  Now for the taste test!!   It was WONDERFUL!!  Even with the disastrous baking debacle, it was light, fluffy and delicious.  If only I could say the same for the Whiskey sauce, which really needs BROWN sugar, not white as the recipe calls for, and I imagine some whiskey would have helped. 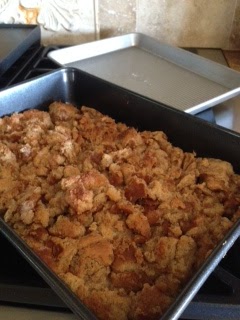 Here's the amazing part of this recipe ... what kind of bread do you think it called for??  Not raisin bread, not white bread, not croissants ... you'll never guess.

HAMBURGER BUNS!!  Yup ... works well with the sloppy joes!!  Hopefully I can try this recipe again ... in a bigger pan ... with even better results.  In the end, my kitchen disaster turned out edible .... chalk one up for Nancy's cooking!!