It was a sad day yesterday, as I continued to clean up the ranch property and put it up for sale.  Every small cattle ranch that I know of in this area has disappeared into the sunset of big corporate farming.  The little guy just doesn't have a chance any more.  Even the backyard farmers have closed up shop!!

I finally located a gentleman and his son who haul off scrap metal for the price he receives from the scrap yard.  This old scraper he is loading spent years behind our little tractor, repairing and leveling roads on the 640 acres of pasture where we ran cattle. 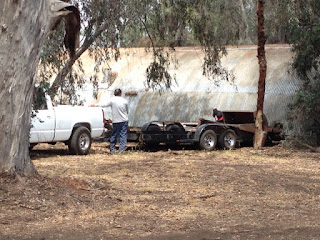 Talk about efficient ... these two had this thing loaded and tied down in about 20 minutes!! 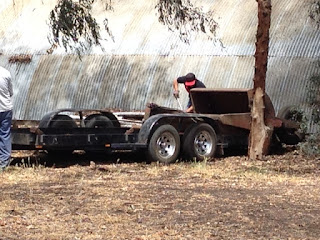 Four loads later we had cleared out most of the old equipment.  There's lots of memories here of us kids playing Cowboys and Indians, racing around the trees on our horses, staying as far away from the Jail (saddle house) as we could so as not to get arrested and thrown in the pokey!!

I learned to drive here with my dad's 1940-something jeep ... ran it into a tree when I was seven.  Hurt the tree more than the jeep!!  It's sad to see the lifestyle go by the wayside!!  I wish I could live here, but it's just too much upkeep for me alone when surrounded by 200' tall eucalyptus trees on 20 acres.

In an effort to keep at least SOMETHING alive, I got out my dad's old dutch oven so I can start practicing the art of cowboy cooking to the next level.  I've always used cast iron skillets and I have to say, not much of THAT food has ended up in my burial plot!  There's just something "better" about food cooked in iron ... that is if you have seasoned it correctly.

At least once a year, it's a good thing (as Martha says), to season everything cast that you have.  Wash with water ONLY ... soak it in hot water if you have to ... set it on the stove on medium heat to let the pores open a bit, and spread just a little olive oil around with a rag.  No paper towels please, they leave lint which you will eat the next time you cook in it.  Now put it in the oven at 200 degrees for 30 minutes.  Turn the oven off and let it cool on it's own.  Repeat if necessary.

By the way, don't buy that cheap junky stuff from China that contains pot metal and all kinds of contaminants.  Buy American made cast iron, like Griswold brand.  Even if it's used from an antique store or garage sale, it's better!! 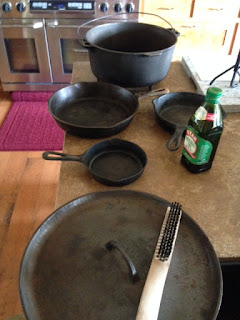 Isn't she purdy????  This big dutch oven put out lots of biscuits in my dad's day.  Hopefully I can do the same with just a little practice.  She's going with me this summer and you're invited to breakfast!! To keep these non-stick (and your food not tasting like teflon from your non-stick pan), wash in hot water after cooking, stick it back on the stove on low heat to dry it really well, then wipe just a smidgen of oil all around with ... you guessed it ... a RAG.  That's it ... done!!  Course cooking a pound or two of bacon will help also!! 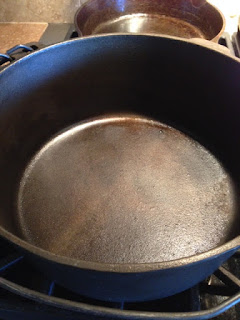 Even though the cowboy life is disappearing, except maybe in Texas where I don't want to live due to tornados, hurricanes, flooding and golf-ball-size hail, I will continue to be a cowgirl till the day I die. Just bury me in my new fancy red cowgirl boots!!  Hopefully I can still get them on after dropping that huge old trunk on my left foot yesterday that I not-so-carefully drug out of the back of my truck. 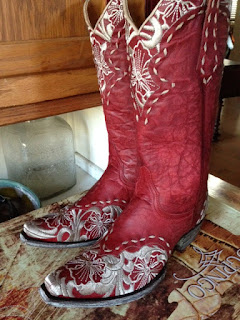 I'm limping just a little, but that's okay ... it just makes me look even MORE like an old cowgirl!!!