I finally made it to the bottom of my address notification list.  It's amazing that none of the telephone answering systems have "address change" as an option.  I found that if I kept hitting "0" that an actual human being would finally answer.  The last four I completed in person at my local banks, so I'm done, that is until I remember two or three more!!

Yesterday being Friday, I held my breath that my neighbor's didn't have another party.  This is what my neighborhood looks like ... it's not like I'm in the low rent district ... but believe me, a nice big beautiful house doesn't reflect it's occupants at all!! 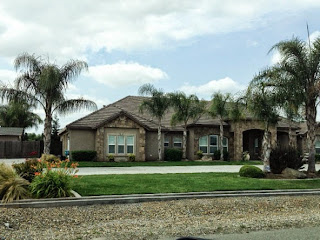 Originally, these houses sold for almost a million dollars.  Crazy, right???  There are only about ten in this little area, all on mostly 2 acre lots.  It's hard to believe when the property values crashed in California, that these sold for $300,000 after being repossessed by the banks.  After all, who wants to pay $900,000 for YOUR house when the one next door just sold for $300,000, so everyone bailed!!

Unfortunately, the result was that people who really don't care what their house looks like, were able to afford the neighborhood.  Several houses in the area don't keep up their landscape or haul off their garbage, nor are they required to keep the BACK yards in repair either.  The results are disastrous to say the least!!

So many people have told me I'm being too nice, that I'm resolved to report any more alcohol/drug parties to the authorities.  I'll just make a quick call to my insurance agent first and make sure my deductible is as low as possible!!!

Friday was also a sad day, as I attended the funeral of a gentleman from the Magic Kingdom who passed away at the age of 89.  With 17 great grandchildren and 3 great GREAT grandchildren, he led a happy long life surrounded by family.  He was buried in the National Cemetery in Santa Nella, fitting for a war hero on this Memorial Weekend.  I had never been to an Elks Lodge funeral, and I was very impressed, but hope I don't have to go to very many more!!

My diet has suffered, being home so much this last couple of months.  Nutrisystem didn't work for me and the food tastes horrible, so I've decided to try the starvation diet.  It's probably going to be the hardest one yet, since boredom always finds me standing at the refrigerator door wondering what I can eat!!  I'll let you know how it goes!!

So life goes on as I check and recheck my RV list.  Every time friend Nick Russell writes a blog, I find one or two more things I should be checking, like running my hands over my tires to be sure nothing is stuck in the tread, like a nail ... and not believing the transmission dipstick, not to mention replacing every tire if I'm running Goodyears .... which I'm not, thank goodness!!