Yesterday started out nice enough at 5:00 am when the neighbor started up his vehicle sans muffler.  That's "without" in everyday language.  It's enough to wake the dead, so it certainly wakes ME up, a good thing I suppose.  At least he's always on time and I never have to set my alarm clock!!

The first order of the day was cupcakes!!  Having seen one of those ads on Facebook that I wish would go away, I decided to give it a try ... and I have to say, this one was a resounding success.  Unusual for me, to say the least!! 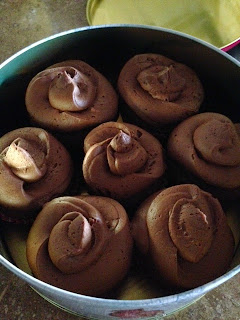 Here's the secret ... take a regular box of cake mix (Duncan Hines here), exchange the oil for an equal amount of melted butter and exchange the water for milk.  My cupcakes usually come out flat as a pancake ... these actually have rounded tops!!  Amazing!!!  Once frosted with the new chocolate melt-in-your-mouth creamy frosting recipe, they all went in the freezer!!  Out of sight, out of mind, sort of anyway.  Not that they will stay there, but at least I won't be tempted to eat them all at one sitting!! 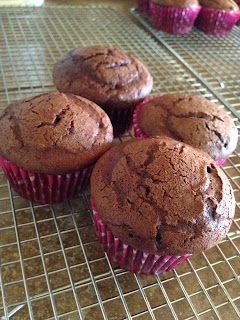 With one success under my belt, I figured I'd try another ... spaghetti sauce!!  This too shall reside in the freezer section for my upcoming trip.  Another tasty dish ... WOW ... I AM on a roll!!! 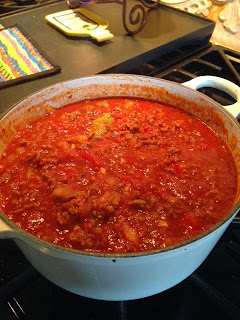 After all that, I had to go for a two mile run, which barely worked off one cupcake.  Those peanut butter chips I put in the cake mix were yummy!!!  Later in the evening, I sat with the puppies on the couch, trying to sew the binding on this quilt.  There's not much room for sewing, as these guys fight for snuggling privileges!! 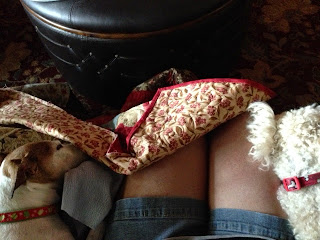 That's when the excitement began!!  Fridays seem to be the day of choice for my neighbor's beer pong parties, and with cars beginning to park all over the street, it looked like tonight was going to be another long one.  I've lived here going on six years and it's always been nice and quiet.  Once the oldest daughter hit high school however, it's been party city!!

With five guys in the garage looking suspicious, I decided to snap a few photos.  What's that funny glass pipe they're lighting up???  Just kidding ... I know EXACTLY what that pipe is and what they are doing all bent over the table!!  I guess they REALLY plan on partying tonight and not just with beer!!  I can't believe the parents let this go on!!

After taking several pictures, I think I was discovered!!  The backlight on my camera must have given me away, because all of a sudden they all stood up, shut off the garage light and literally RAN for their cars, screeching tires as they left in a BIG rush!!  Uh oh .... I may be in trouble here!!  I'm really not sure what the reason was for their quick departure, but I AM glad they left.

I sent a text message to my Cop Friend just in case they decided to come back in the middle of the night.  At least he would know where to find the evidence in my camera!!  His recommendation sounded pretty good to me ... if they come back or have another big party, set off my house alarm and have the Sheriff show up, saying someone must have tried to get in the garage.  Excellent idea!!!

In the meantime, I set my house alarm and went to bed in peace and quiet!!  I guess the party got cancelled!!

Posted by Nancy Kissack at 7:17 AM