It's just been "normal" around here for the last couple of days.  Boring actually, which is why you haven't seen a blog!!

I read yesterday about the tragic death of Dean Potter in Yosemite National Park, an extraordinary rock climber who thought nothing could ever happen to him.  He was one of those "flying squirrel" guys.  They figured if the squirrels could fly with flaps between their arms and bodies that men could too.  Well, that didn't work out so well when the plan was to base jump and fly between the cracks in the mountain.  They didn't get the lift they needed and hit the rock face.  I know this sounds terrible, but I'm just glad he didn't take his dog Whisper on this trip.  The moral??  Never EVER think you are invincible!!

Then I received an email from Tiffin Parts Department.  I've been trying to get a replacement part for this weep hole.  Five emails later, it has ME weeping!!  They insist there are holes in the side in which to place the prongs on the cover.  I cleaned and scraped and even used a magnifying glass.  There are NO holes, which is probably why it came off, held on with just silicone and paint. 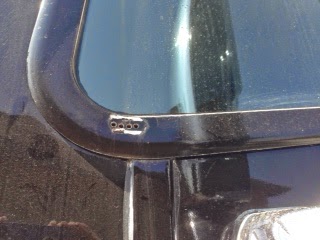 I suppose I don't really need the cover .... I could just sand it a little and put on a coat of paint.  It whistles going down the highway, but I'm sure I could find something to stuff in the hole from the inside!! 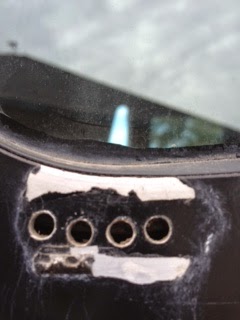 On to the next project .... Escapees mail handling.  It took some time to get to their website and download the forms.  As you all know, it's frustrating to have a bad internet connection.  It's still up in the air as to the culprit ... Clearwire Modem, Sisco Wireless Router or computer.  Clearwire is going bye-bye in October and I'll be stuck with Sprint, however my sprint MiFi doesn't work at my house, so I'm not sure what I'm going to do!!  It DOES however, work on the road .... except I just got a letter saying they are discontinuing THAT model too.  I'm pretty sure that's because I have unlimited data usage, which won't be available any more without beau coup dollars!!  In the meantime, I ordered a new router .....

Baked a Mexican casserole
Vacuumed the house
Played with the puppies

And filled out the Escapees mail paperwork, whereupon I discovered I need TWO copies.  The problem is that I can't seem to get back on their website.  I don't understand why I can get on other sites in two seconds, but not Escapees and Google sites.

I lost my brand spanking new driver's license ...
Found it again in the copy machine in the rig where I left it making copies for Escapees
Watched the prelim story on Texas Rising ... about Texas Independence
Played with the puppies
And went to bed!!!