Where's Tom?? Kitty Kitty? It Was The Geese!!

There's always days when everything just doesn't go right, do you know what I mean?  Yesterday was one of those days!!  We decided to drive downtown to check out St. Ignace and do a little geocaching.  After finding the perfect parking space next to a great store, the shopping bug took hold and Barbara and I couldn't resist.  Tom disappeared.  After hauling all our purchases ... really all MY purchases ... back to the car, we began the hunt for Tom ... who conveniently or not, left his phone home.  Are you with me ladies???

Barbara and I scoured the streets up one side and down the other, cruised through museums and shops, to no avail.  In the meantime, since there were a couple of geocaches along the way, we stopped long enough to find one.  Still no Tom.  I spied a hardware store way down the street and figured he might be there, but we again got sidetracked by a geocache.  I'm sure at least two hours passed (probably 30 minutes) before we returned to the original store to pick up the car and drive the back streets, before calling out the National Guard, when out walks Tom from the original store, saying he was "just next door".  Okay then ... onward and upward!!

We stopped in at the Shepler Ferry dock to see where we might watch the Saturday night summer fireworks show, which happened to be right behind their building, before looking up Clyde's Drive-in for lunch.  In Sault Saint Marie, Clyde's was great ... good food, good service.  THIS Clyde's had an older waitress who had been at this service business WAY too long.  She basically ignored everyone who entered for at least 15 minutes before finally coming to take our order.  It's not like we were looking at menus ... there were none.  The place is exceedingly popular with the locals however, as we had to squeeze off our stools and out the door between 15 people packed like sardines waiting to order.  I'm pretty sure many of them are still there waiting for the waitress!!!

Back at the rigs, I was watching TV ... yes, I FINALLY figured out that I can turn my antenna to get local channels when the dish is blocked by trees ... when there was a knock at the door.  The lady from check-in had been sitting on the table close to my rig when she saw the lost kitty underneath.  The second hunt was on!!  I got some more kitty food from Tom and Barbara, sat down by a tree and waited for kitty to come eat, at which time I would grab him!  I was inches away ... inches ... when a huge blast went off, sending kitty scurrying back to the woods.  I kept meowing (with no idea what I might be saying) ... following and shaking the food bowl.  Finally, food won him over and I was able to snatch him!!  Poor kitty wasn't happy about that, but having been declawed, he wasn't going to last long in the forest!!  Kitty's mom was called and I'm sure he will be home soon!!

By now it's time for fireworks, so off we went again ... Tom with his phone this time ... to the Sheplers back dock where we had a birds eye view.  Across the lake the Saturday night Music Fest was going on, so we were serenaded with Margueritaville. 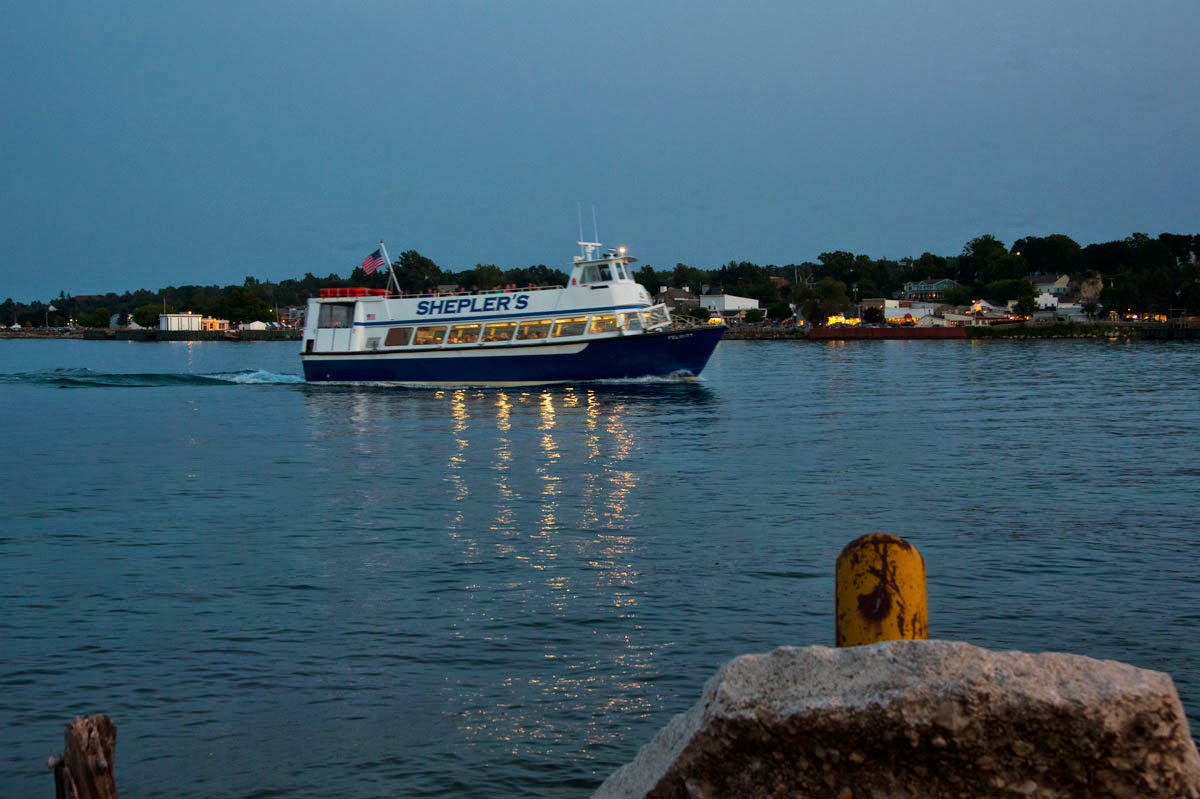 What a beautiful night ... no jacket required ... as we watched the lights on the water. 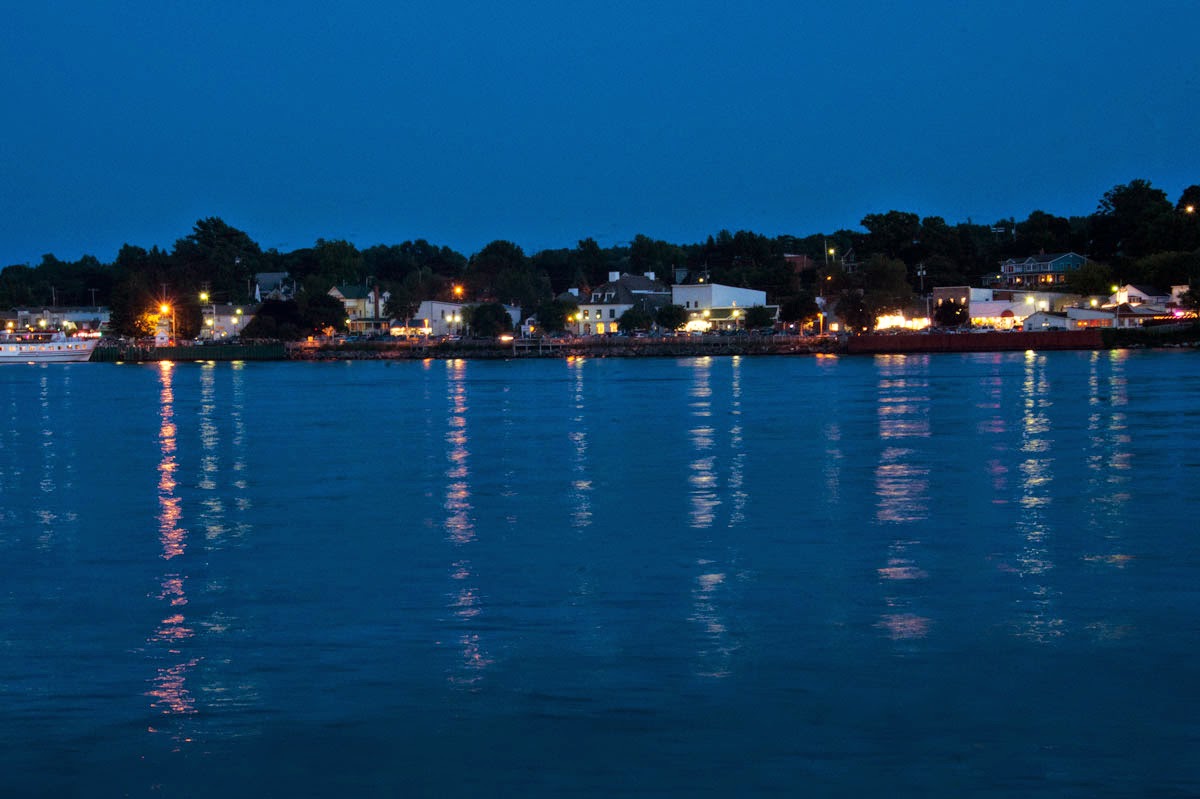 THAT'S when these guys walked by ... all lined up in a row, snickering under their breath!!  They knew I couldn't resist a picture, but it being so dark, it required I change the ISO on my camera.  I heard them laughing out loud as they sauntered on by. 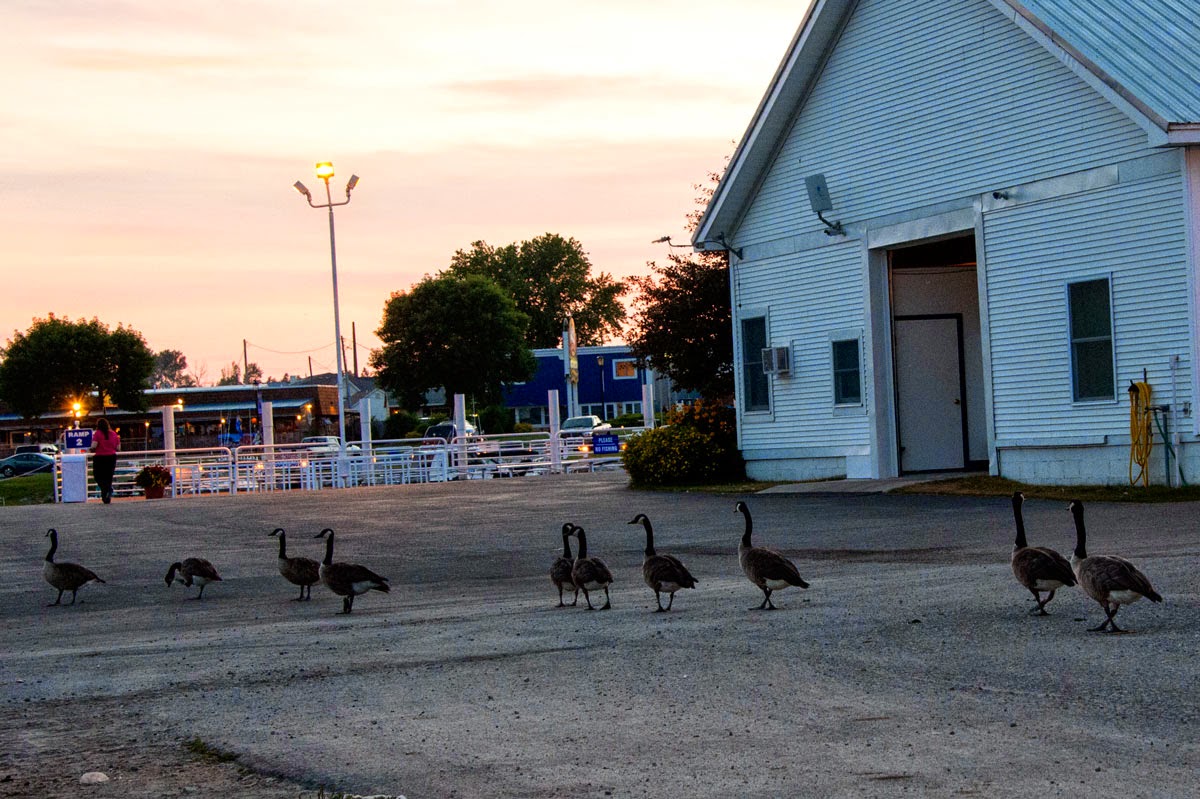 After several fireworks test shots (that's what scared the kitty away an hour earlier) it finally got dark enough to start the program.  Let me just start by saying the tripod I have is not made for this camera.  It's very difficult to move when the fireworks go off above or to one side.  Hmmm I'm not getting very good results .... I change a couple of settings. 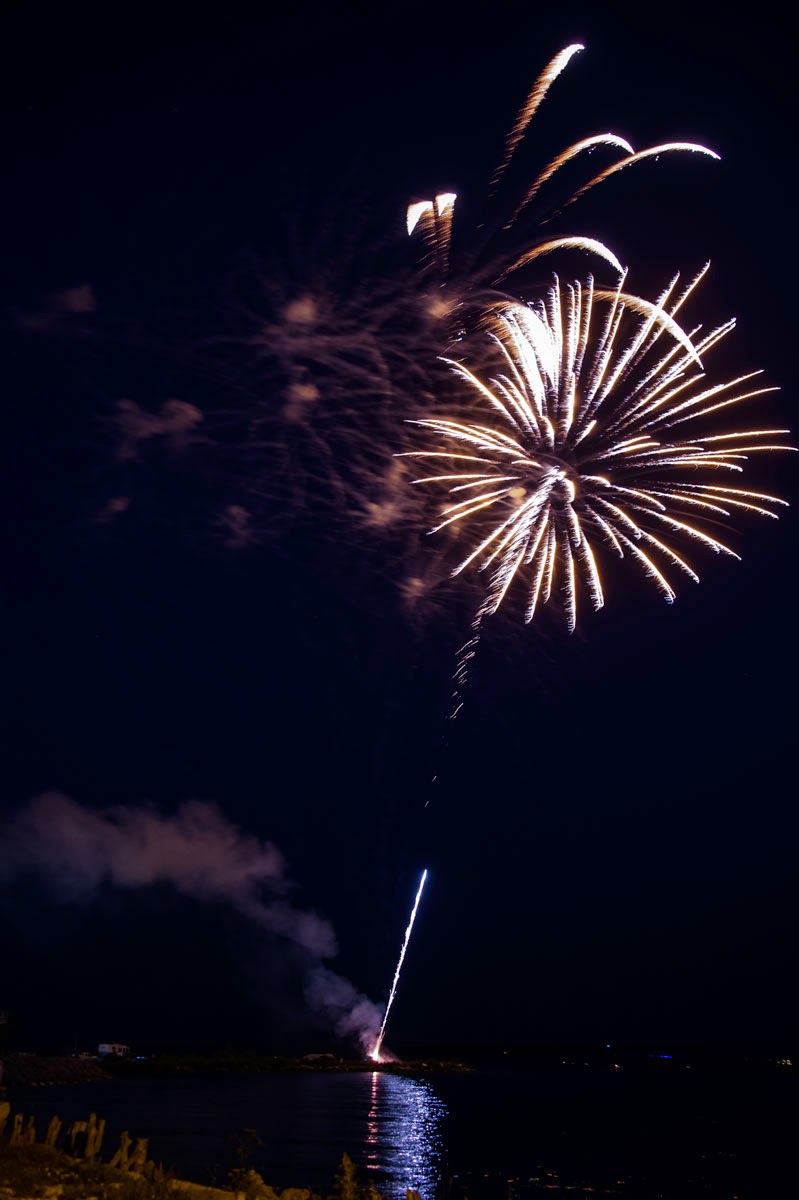 Several blasts went off right in the area I had the camera pointed ... I change another setting. 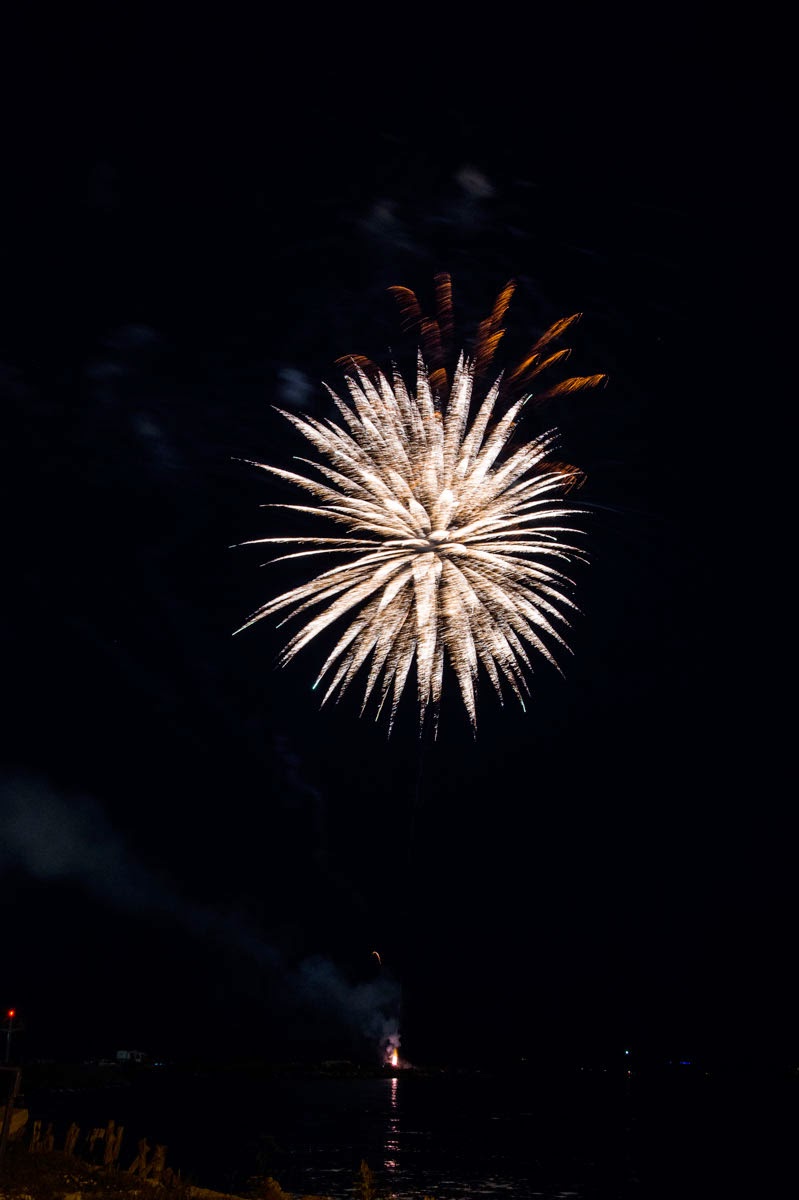 What am I doing wrong???  These just aren't coming out good at all!!  I should have just left it at this wide angle shot, but no ... I kept adjusting and changing!! 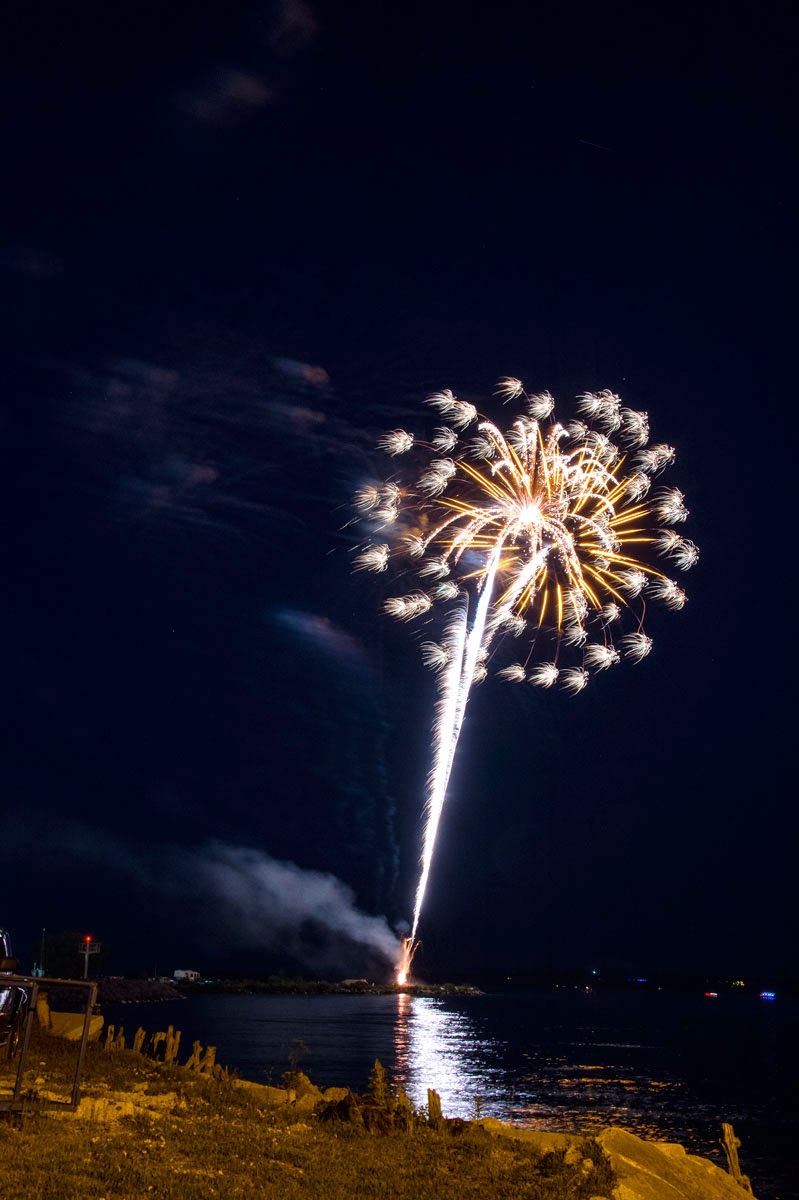 By now, all the fireworks are going off way to one side, completely out of my camera range. 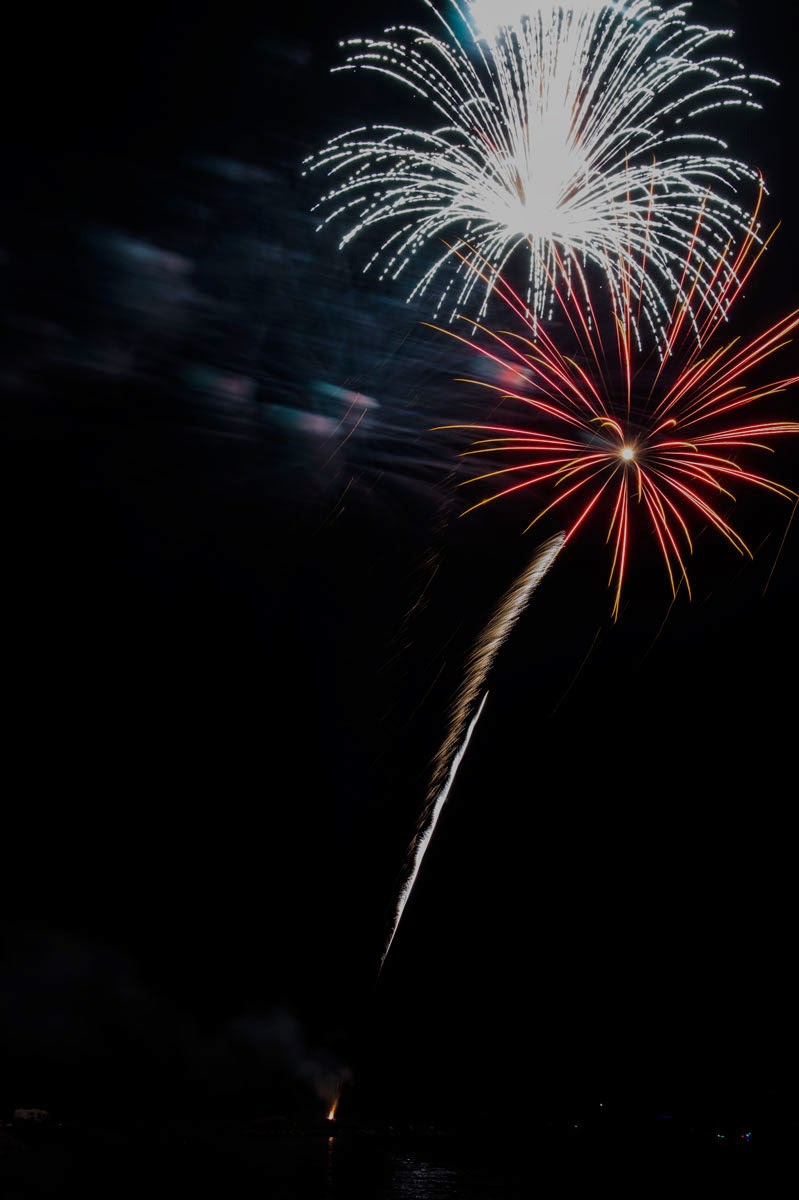 I change the exposure length of time ... that muddied things up nicely!! 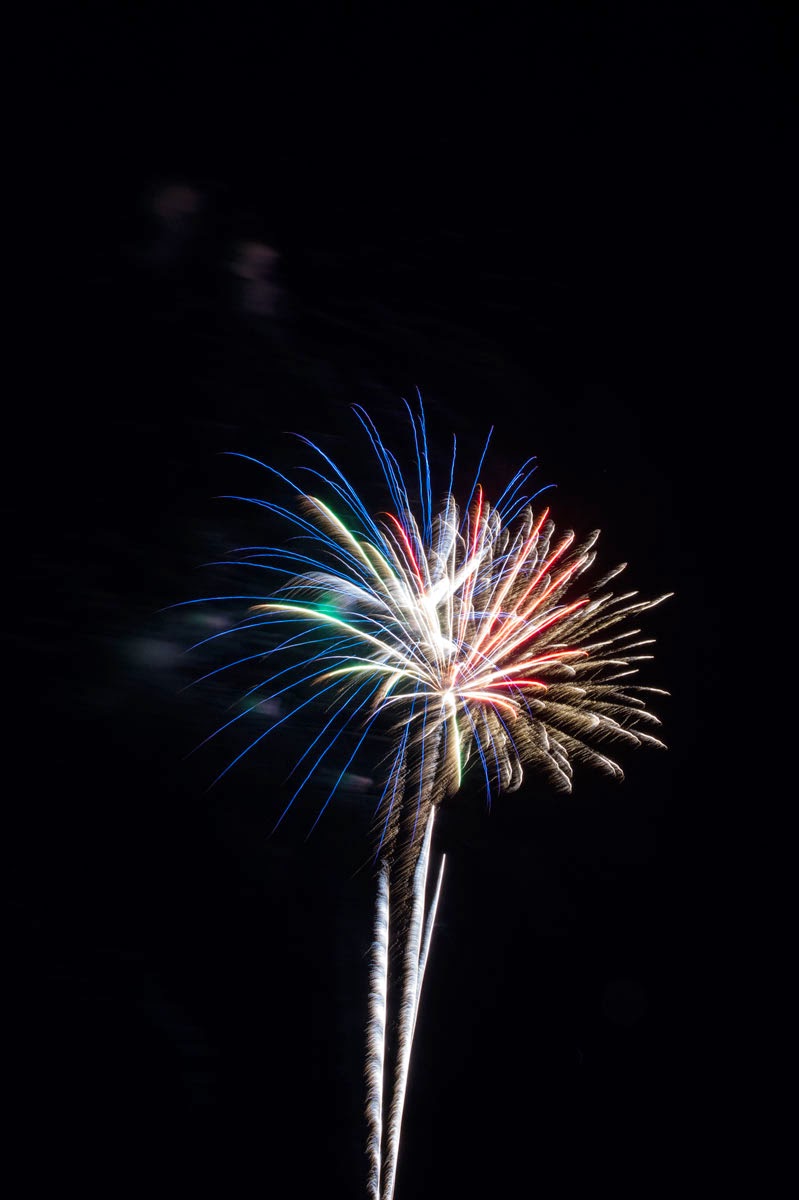 FINALLY my brain kicked in ... it was the GEESE!!!  It was all their fault ... THAT's what they were laughing about!!  They knew I would change the ISO to take their picture ... which is totally the opposite setting that you would use for fireworks!!  Geeze Louise!!!  I switch it back ... and voila!!  The first good image at almost the end of the show!! 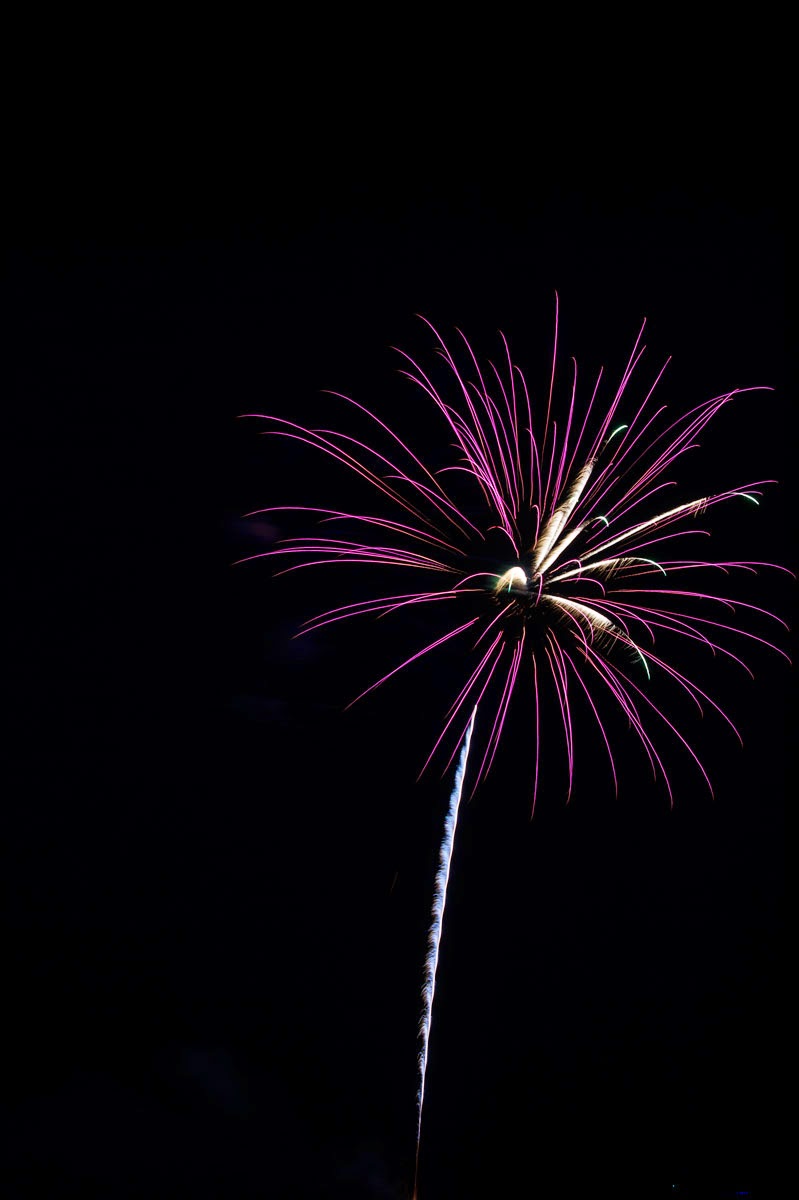 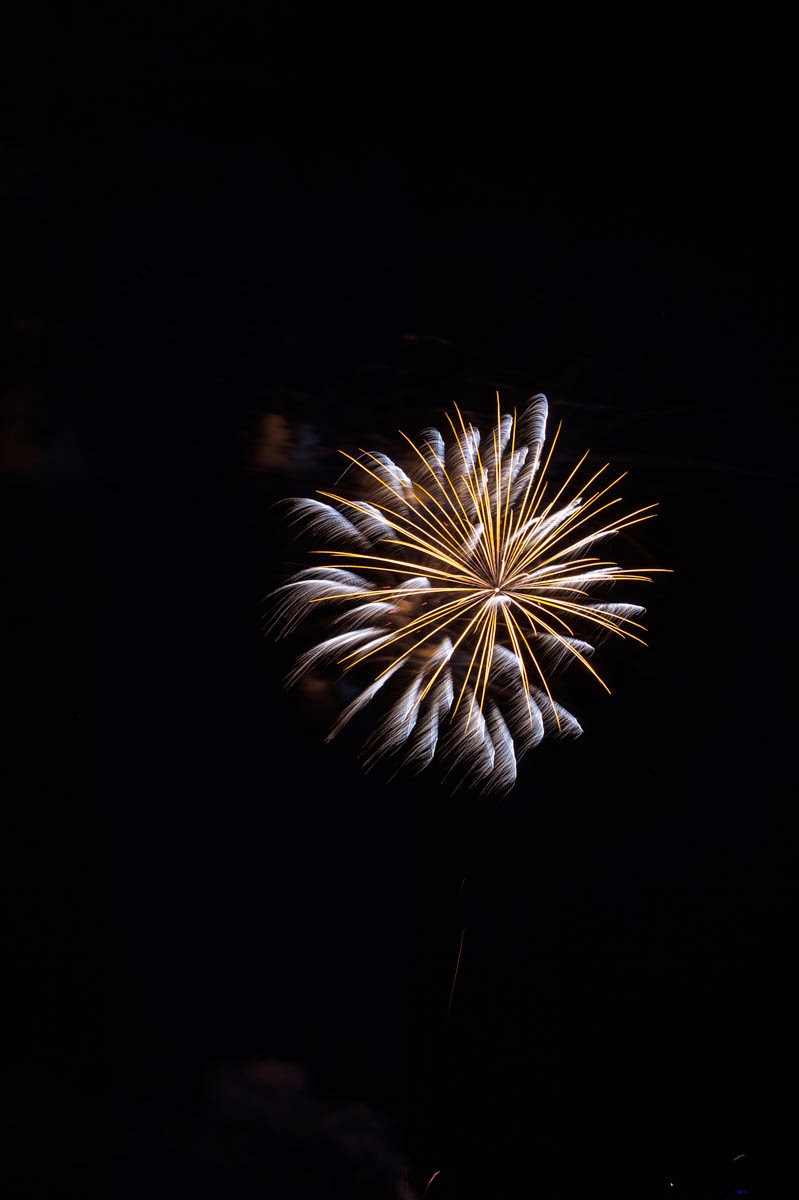 And finally get a few nice images! 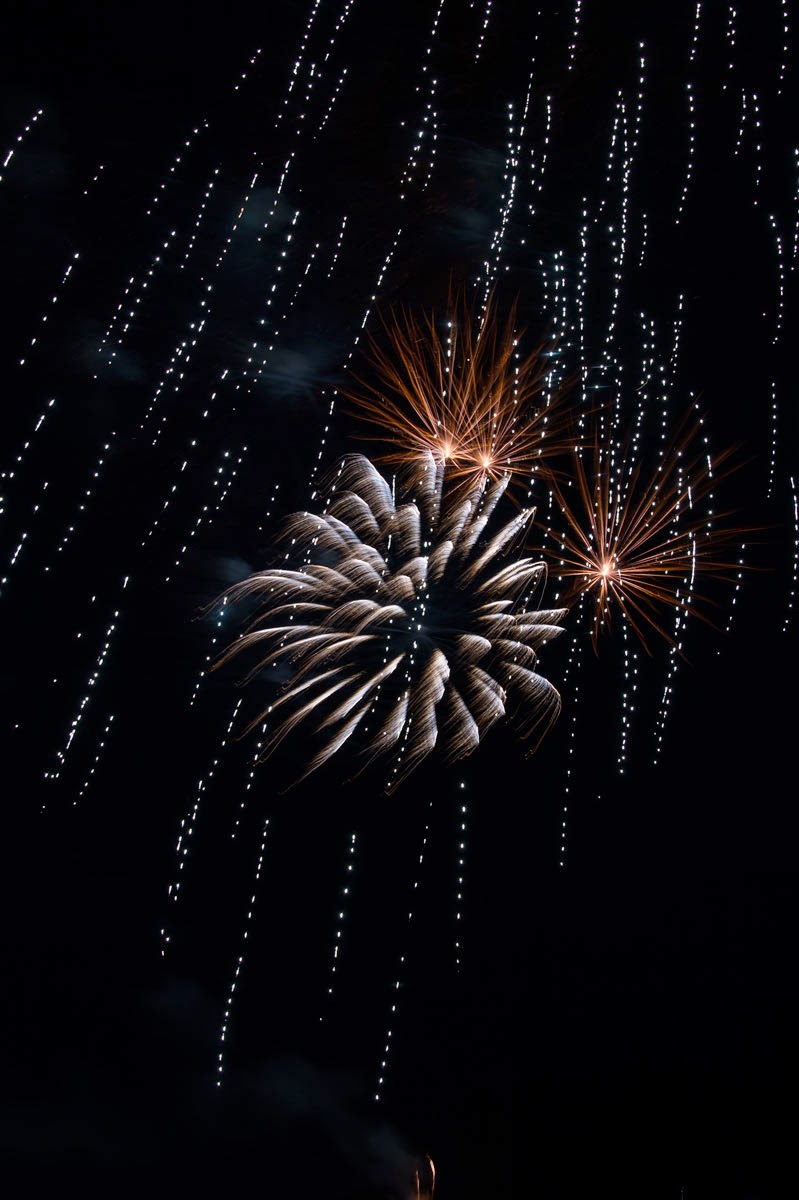 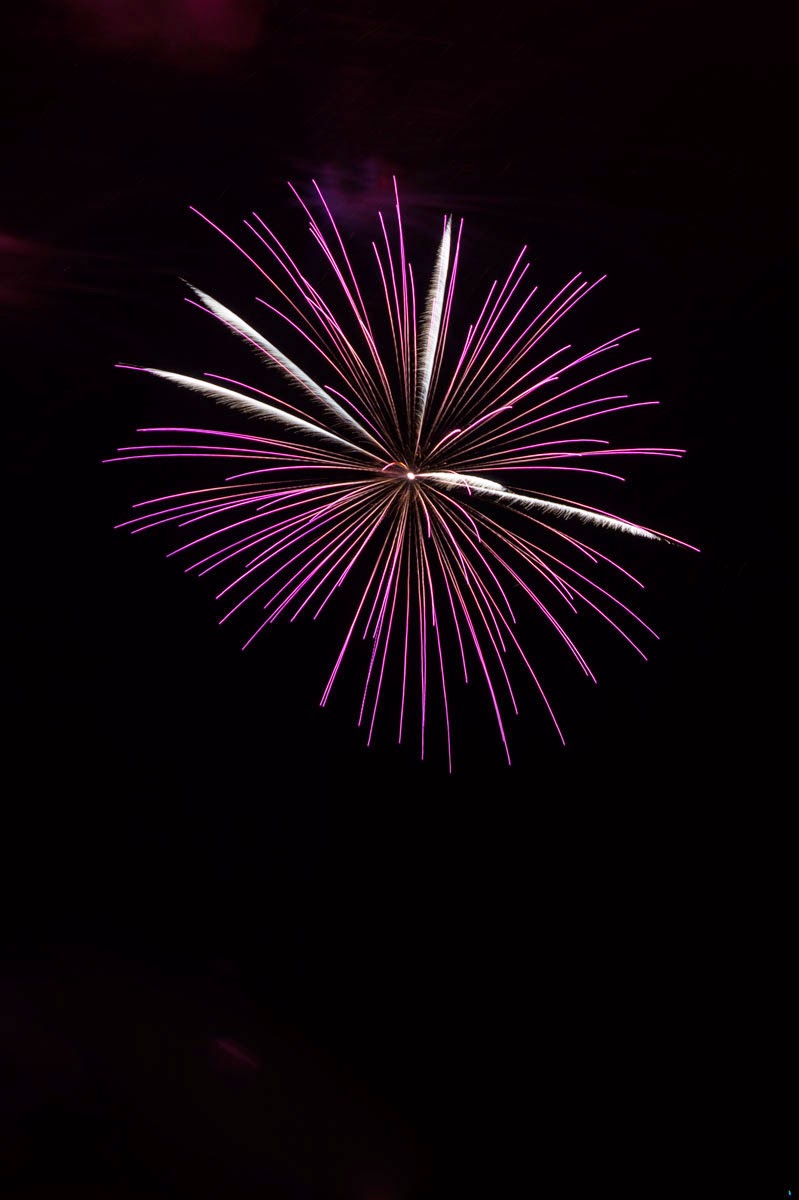 Those darn geese ... next time I will totally ignore their taunts and turn my back!!! 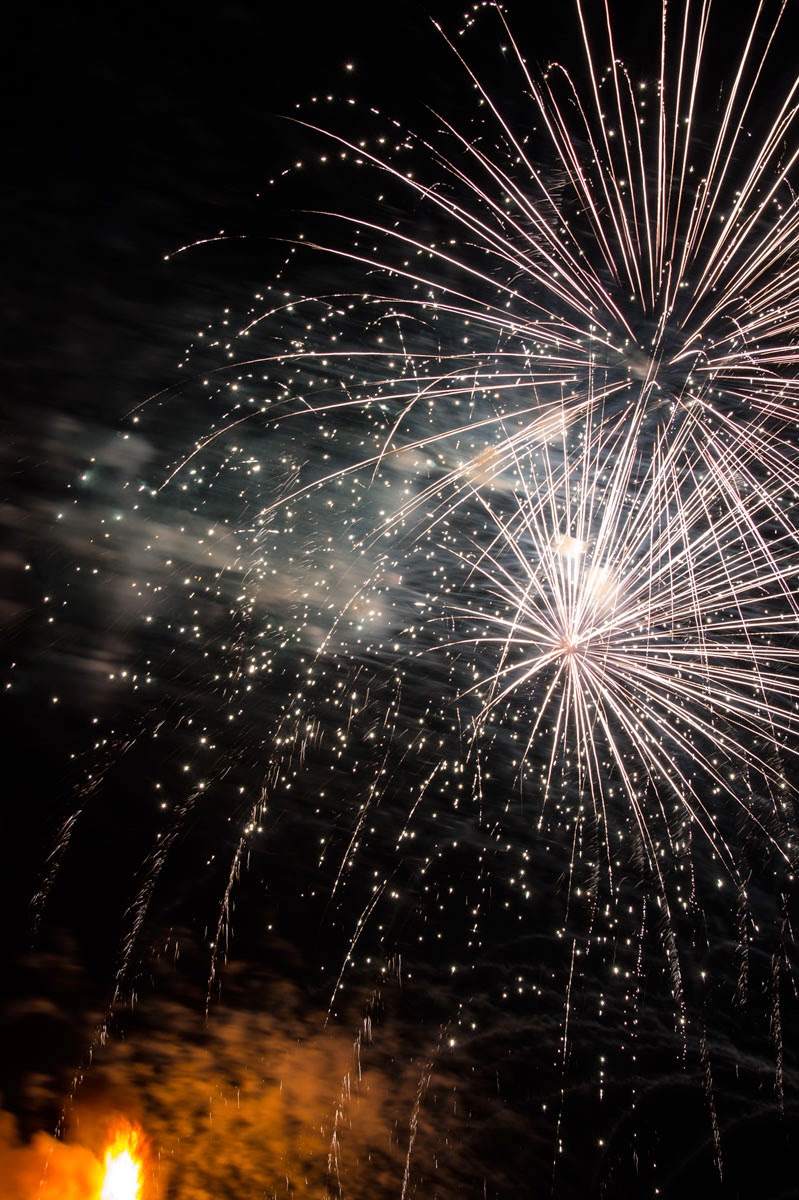 We were planning to move on South today, but are having trouble finding a place to stay around Dearborn Michigan.  It may be a Walmart night!!  At least there won't be any geese sneaking around!!