Shhhh it's a secret ... yesterday was Tom's birthday!!

I guess the name Henry Ford is pretty familiar to everyone around the world, but here in Dearborn Michigan, you don't even have to describe what this is or where we went today.  The huge museum complex is simply called The Henry Ford.  It's rather different and contains some unexpected sections.  There's the expected section of old cars, then there's the old (and some newer) farm equipment.  There are lots of the biggest steam engines I've ever seen, and maybe the largest in the world ... then there is the section on furniture.  Just as you think you've got it down, up pops pewter and silverware, a section on clocks and the Weinermobile! 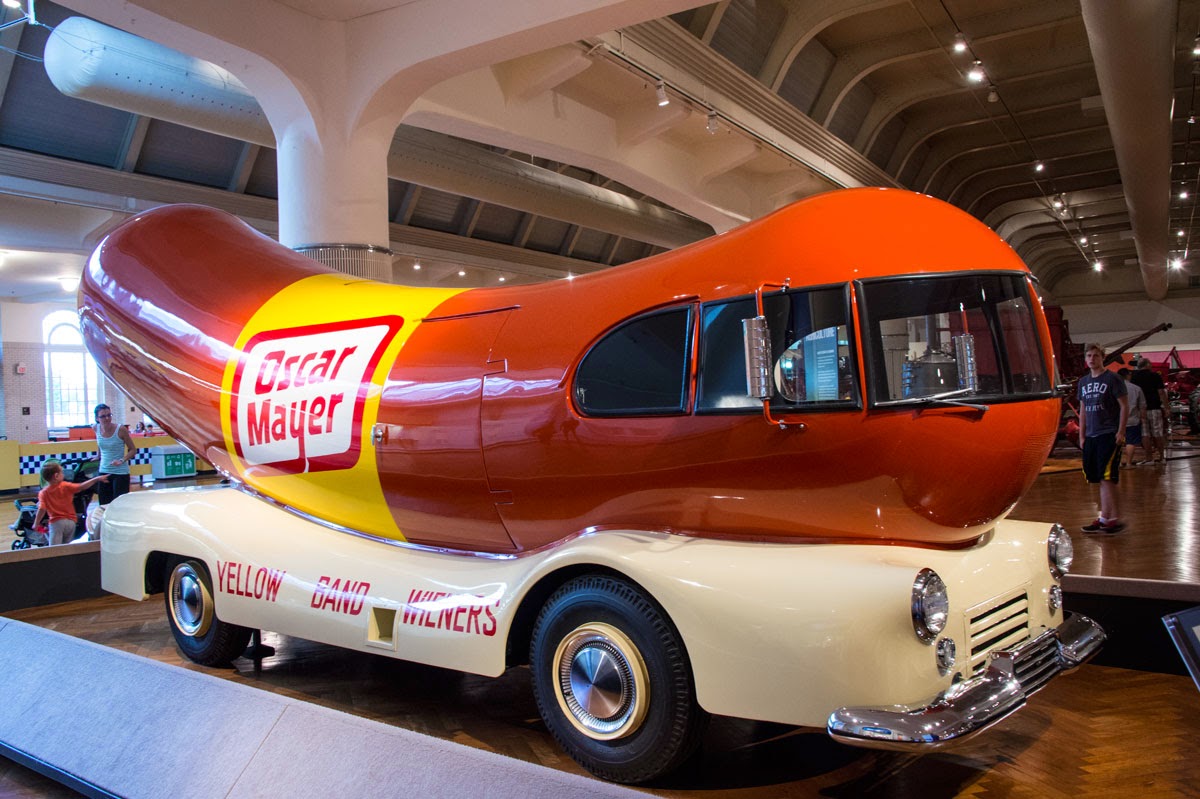 There were many examples of farm equipment from all different ages, but mostly from back East.  We expected to see a Fresno plow, but maybe that's a California thing. 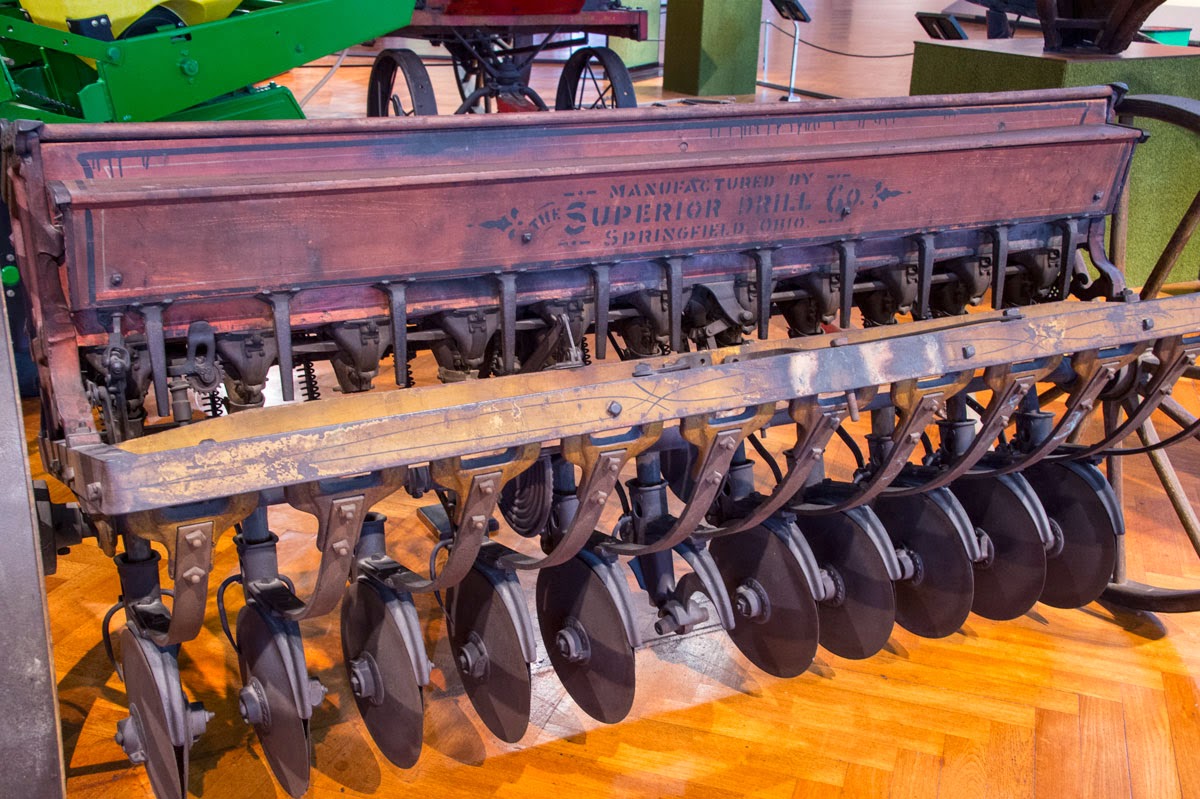 I can only guess that the reasoning for including some old and some new was to see the progress from an invention standpoint.  I'm sure this tractor was much stronger and faster than horses, but I'm not sure the ordinary farmer could operate such a complicated piece of equipment!!  I wouldn't even want to try this beast!! 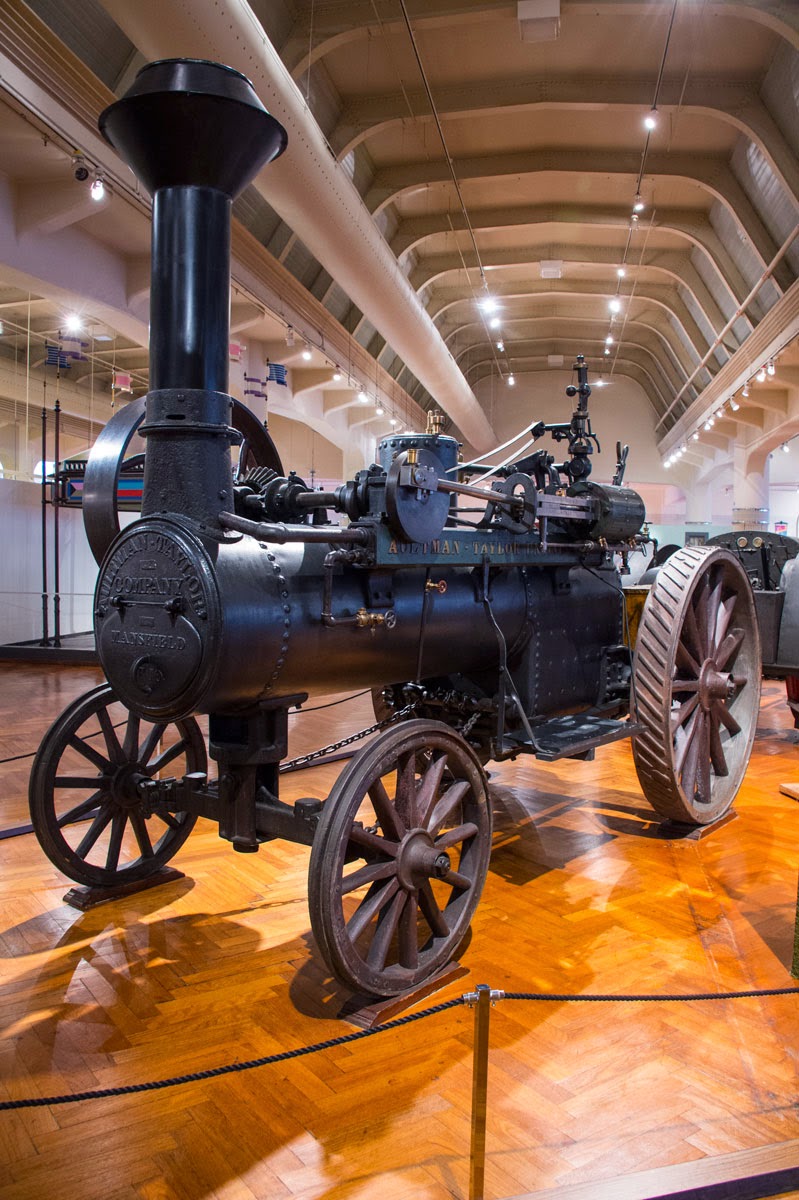 In Made In America Power, the steam engines brought here from all over the world are probably some of the biggest ever built.  From hauling water to powering a ship on the Great Lakes to providing power for an entire town, every kind imaginable is here.  I'm pretty sure this section wouldn't be interesting to most women, but you have to admire the builders of such gigantic equipment that made life easier. 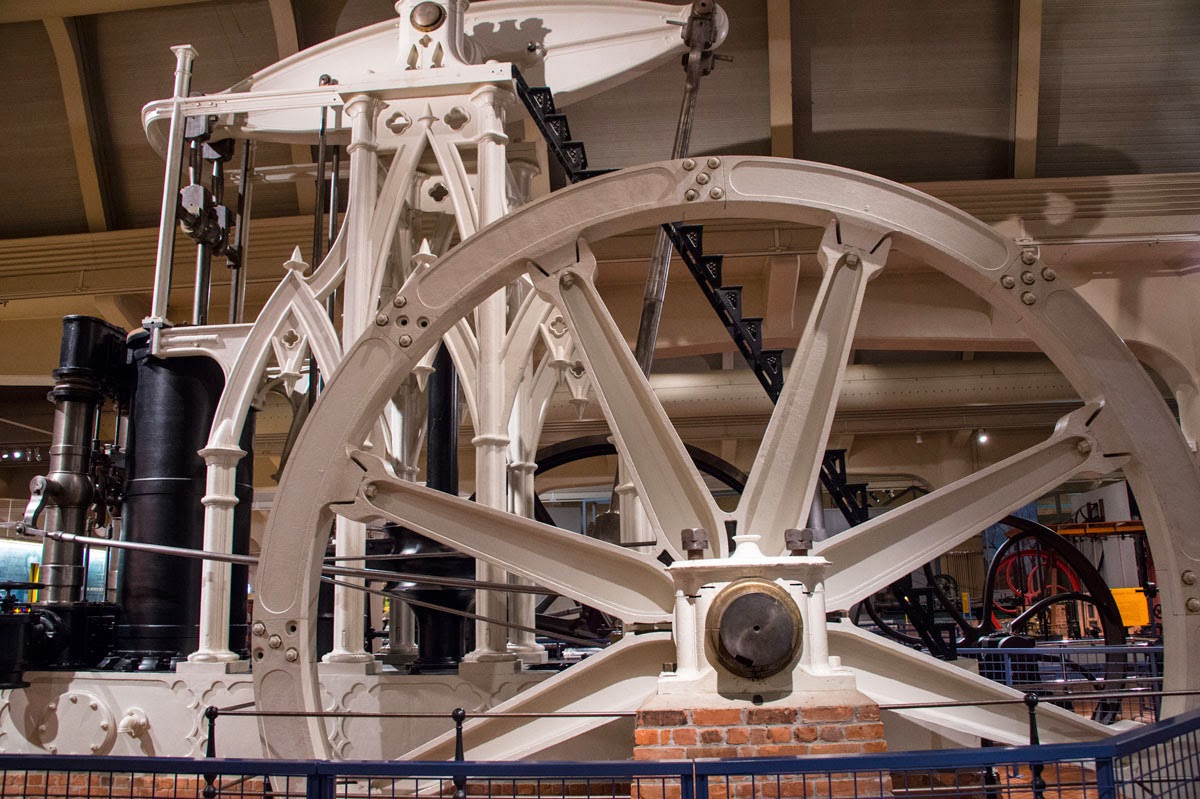 Here's one that did work for us ... a water motor.  Just attach it under your sink faucet and turn on the water, which moved the wheel inside and the gear outside, that when hooked to your sewing machine with a belt, let you sew with ease!!  Course it doesn't mention your sewing machine sitting in the middle of the kitchen or the wasted water. 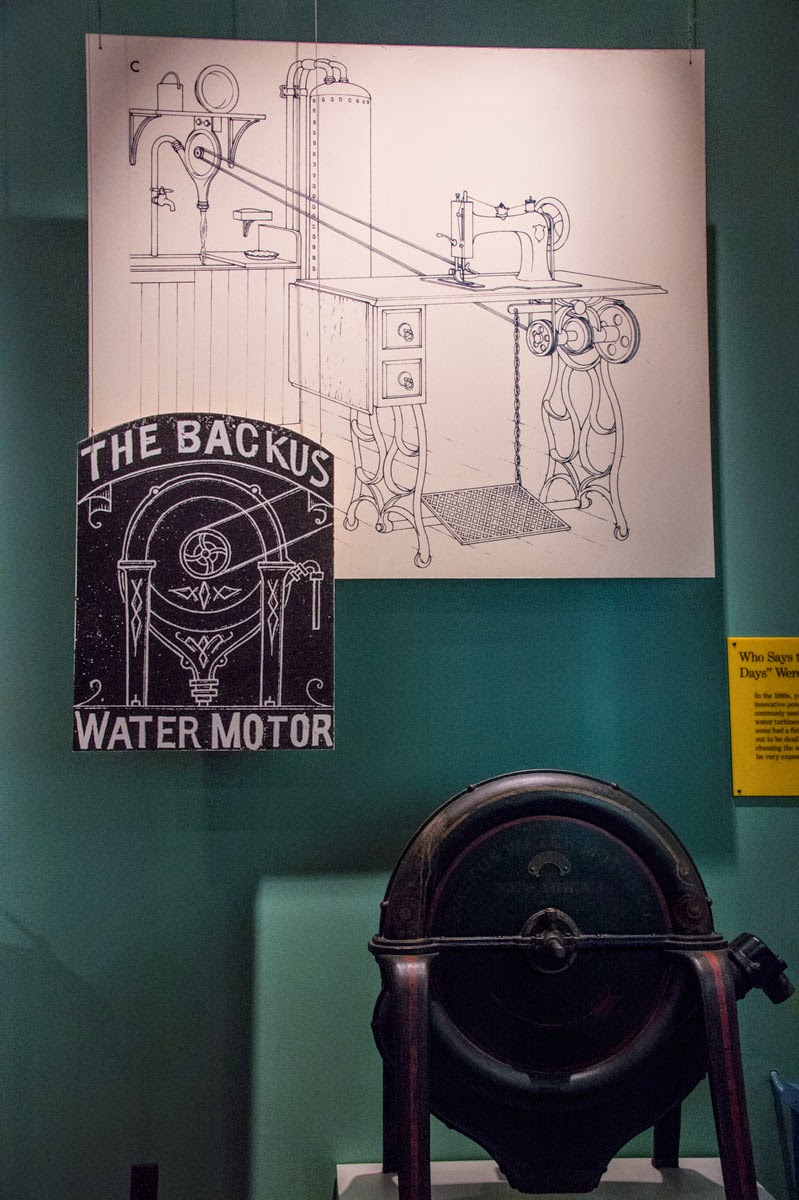 There were tons of cars ... I skipped most of them ... to see what the early steam models looked like.  This is the oldest American made car in existence. 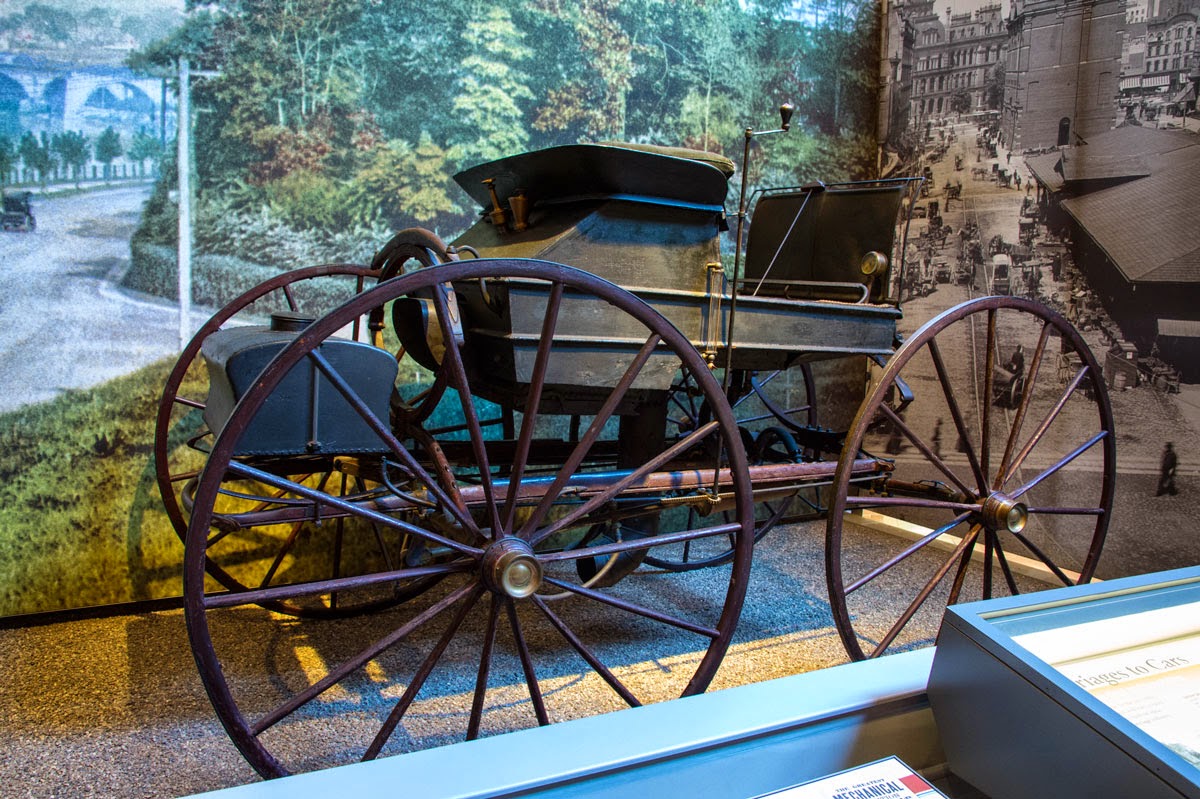 There were lots of cutsie ones I wish I owned ... wouldn't you just love to drive this around town?? 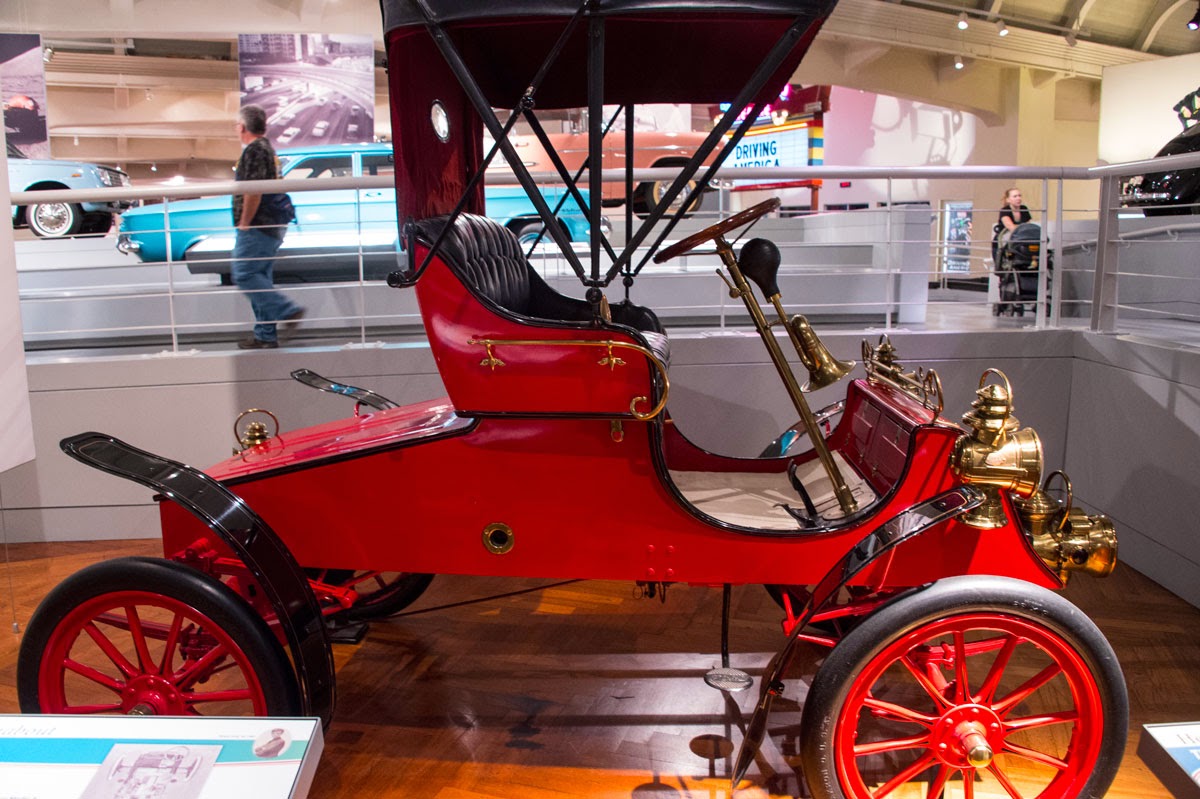 This Packard is the second car ever to drive across the United States from coast to coast. 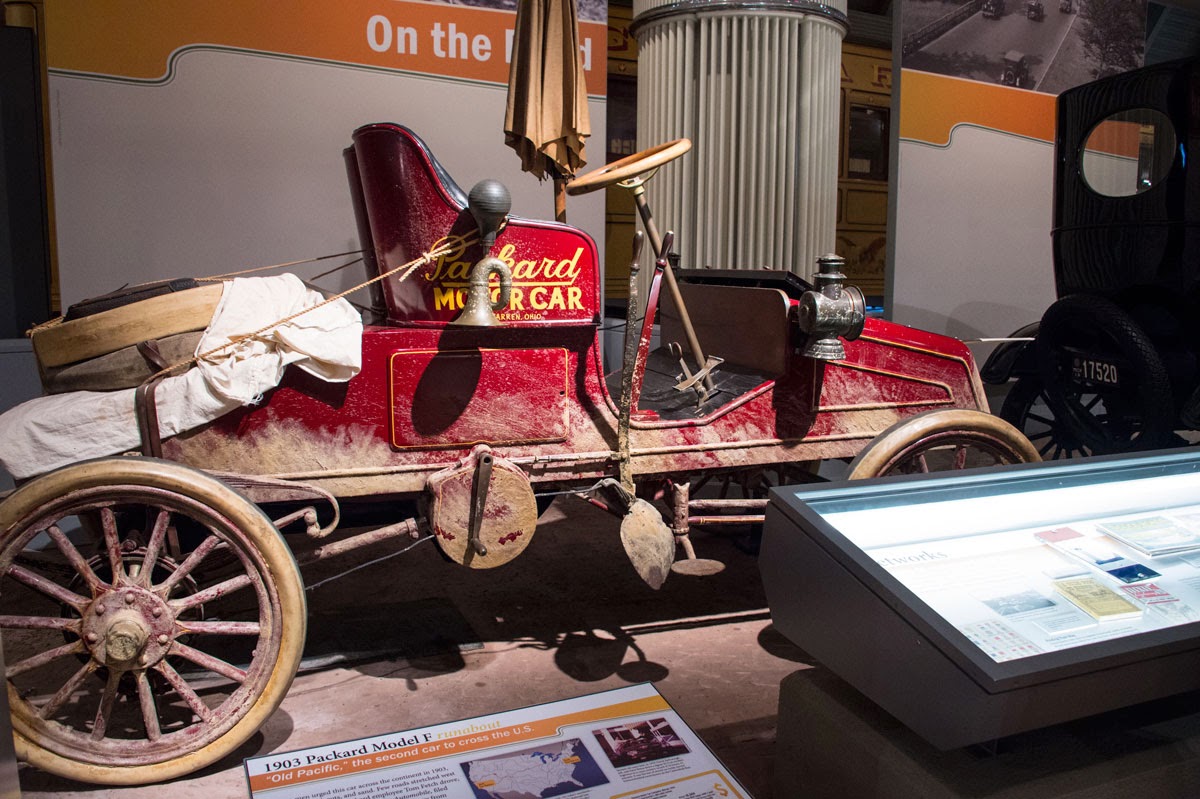 There were pink cars and blue cars and white cars .... I know, I'm bad for not taking more car images. There were Fords and Chevys (surprise) and Jeeps, a Volkswagon camper bus and a Corvair, a couple of race cars ... you get the picture, right?? 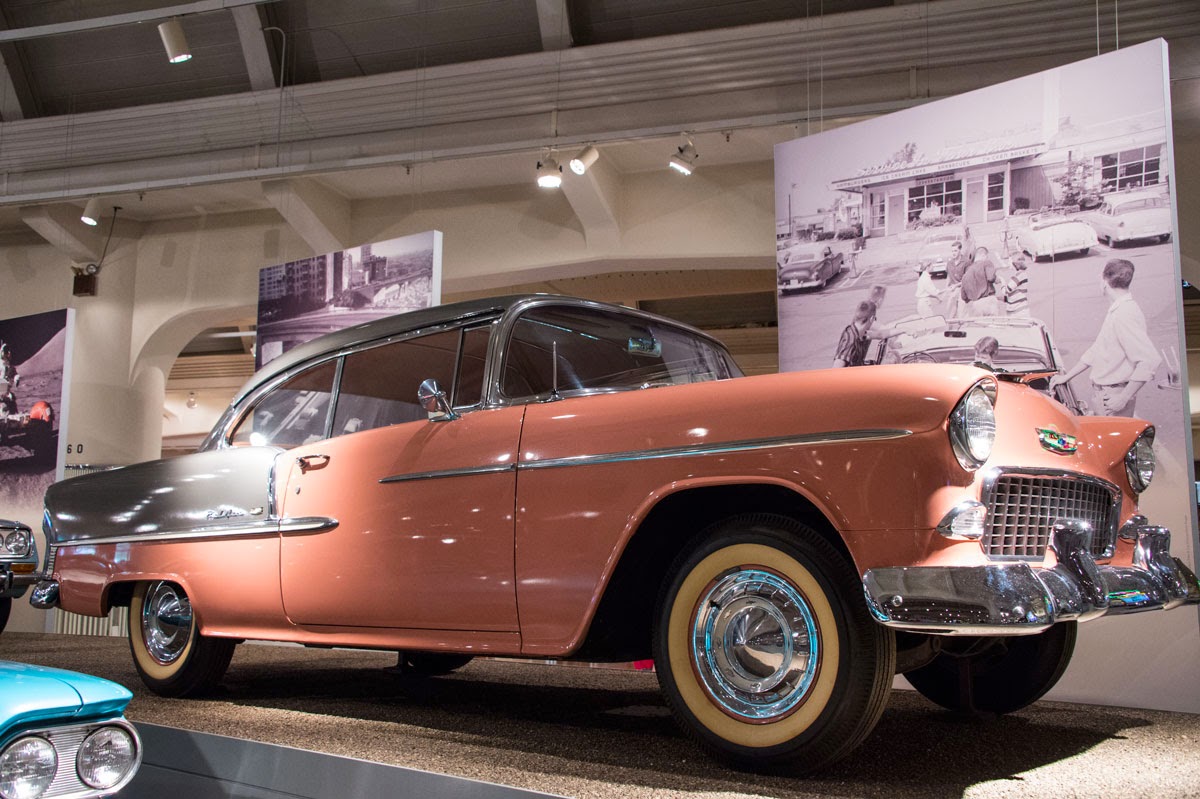 In one corner of the building is an exhibit that changes from time to time.  This one was called Women Who Rock ... and featured this giant guitar out front. 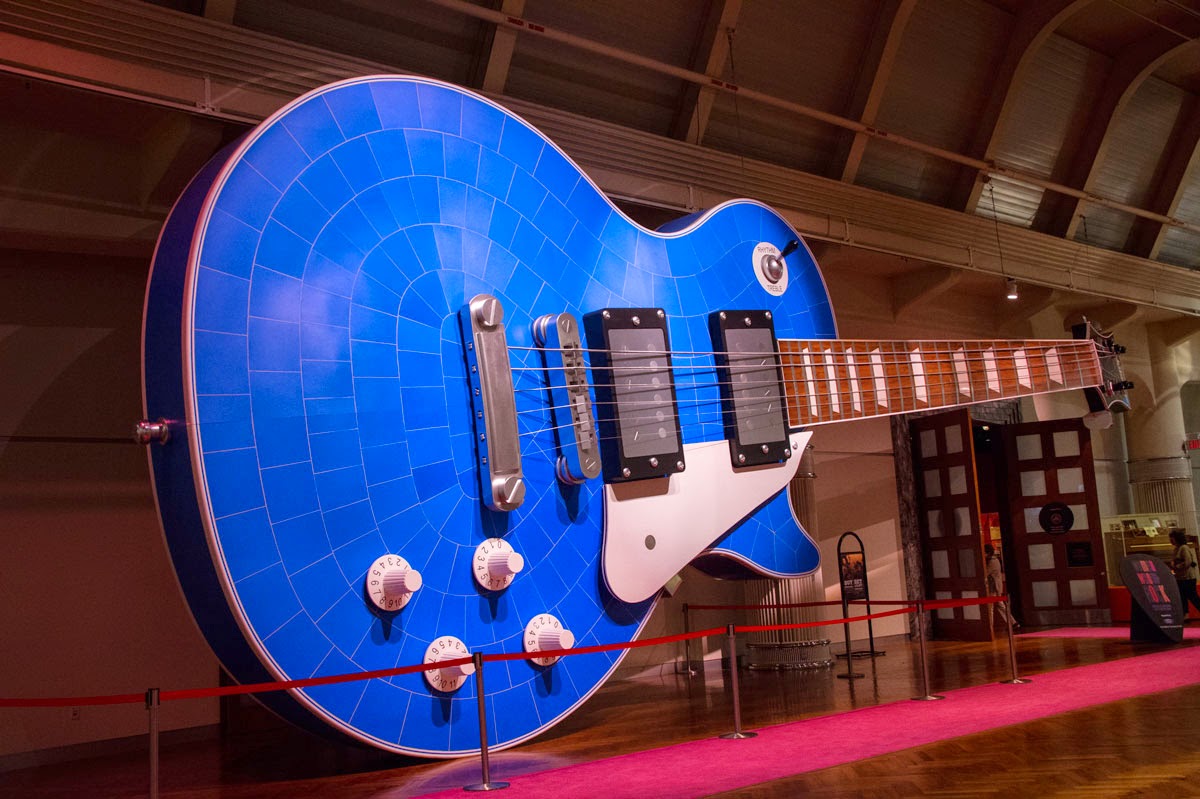 From Billie Holliday to Lady Gaga, there were outfits worn by the women of rock 'n roll, along with a short story about each piece.  I'm not sure how Loretta Lynn fit in since I thought she was a country singer, but her beautiful pink dress was here.  Some of the outfits were pretty crazy, I mean what were they thinking?? 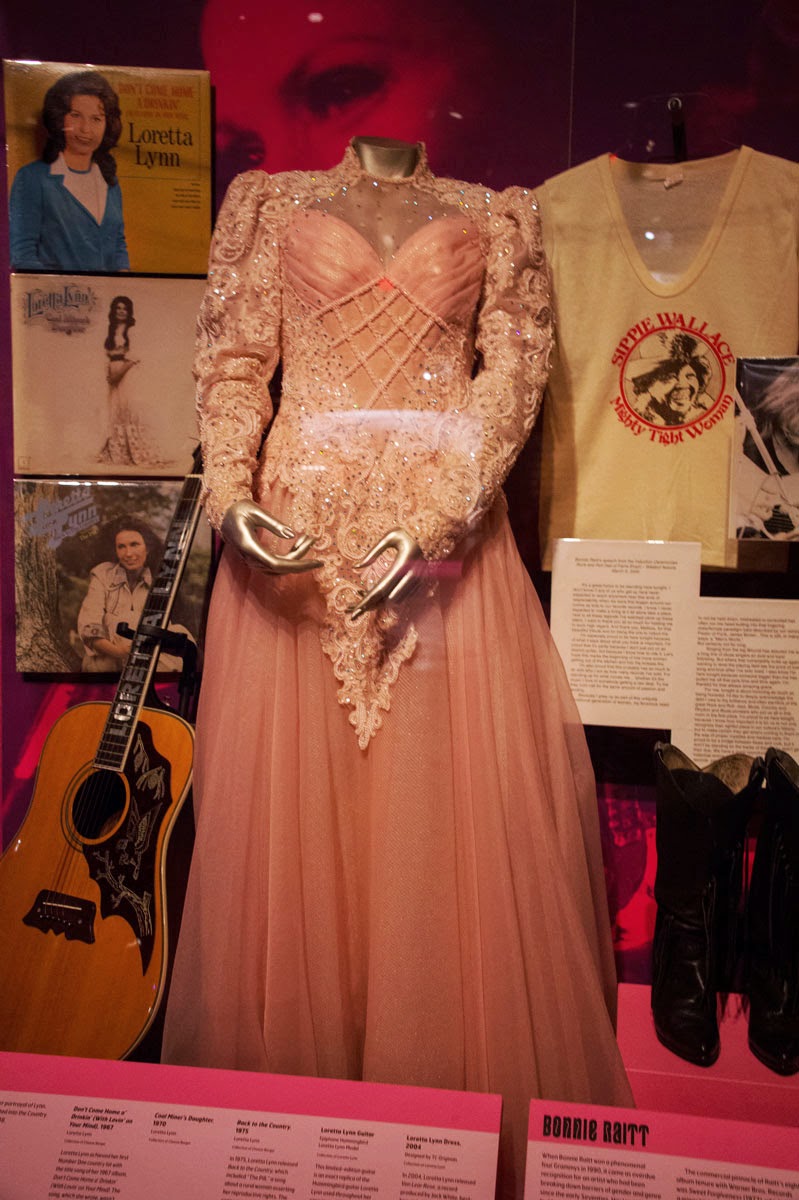 There was Janet Jackson, Cindy Lauper, Rhiana, Cass Stephens, Madonna, many that I recognized and many I had never heard of.  Cher's Indian Headdress outfit was here, but the silver body just didn't work for me.  Bob Mackie's original drawing is on the left.  On several screens around the room, you could watch the original performances. 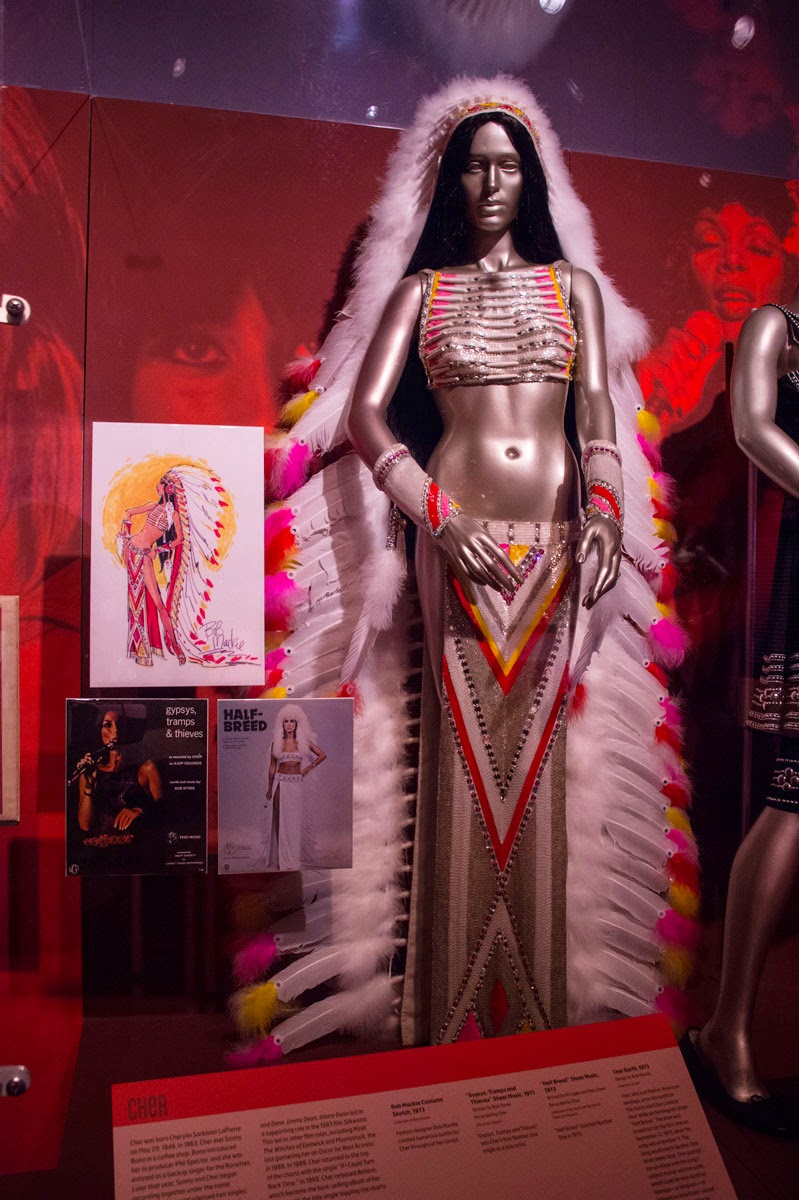 Henry Fords friend Buckminster Fuller got the brilliant idea to build a round structure of aluminum alloy, suspended from a central pole.  He needed a $10,000 investment to get this company going, but could only raise $3,000.  He built two, one of which is on display here.  One couple bought both, lived in this one for a short period of time and moved out.  It does have some interesting advantages, like a revolving chest of drawers and a water catchment system ... rain water runs down the INSIDE of the ceiling and is collected at the bottom.  It doesn't touch the ground ... it is suspended in air. 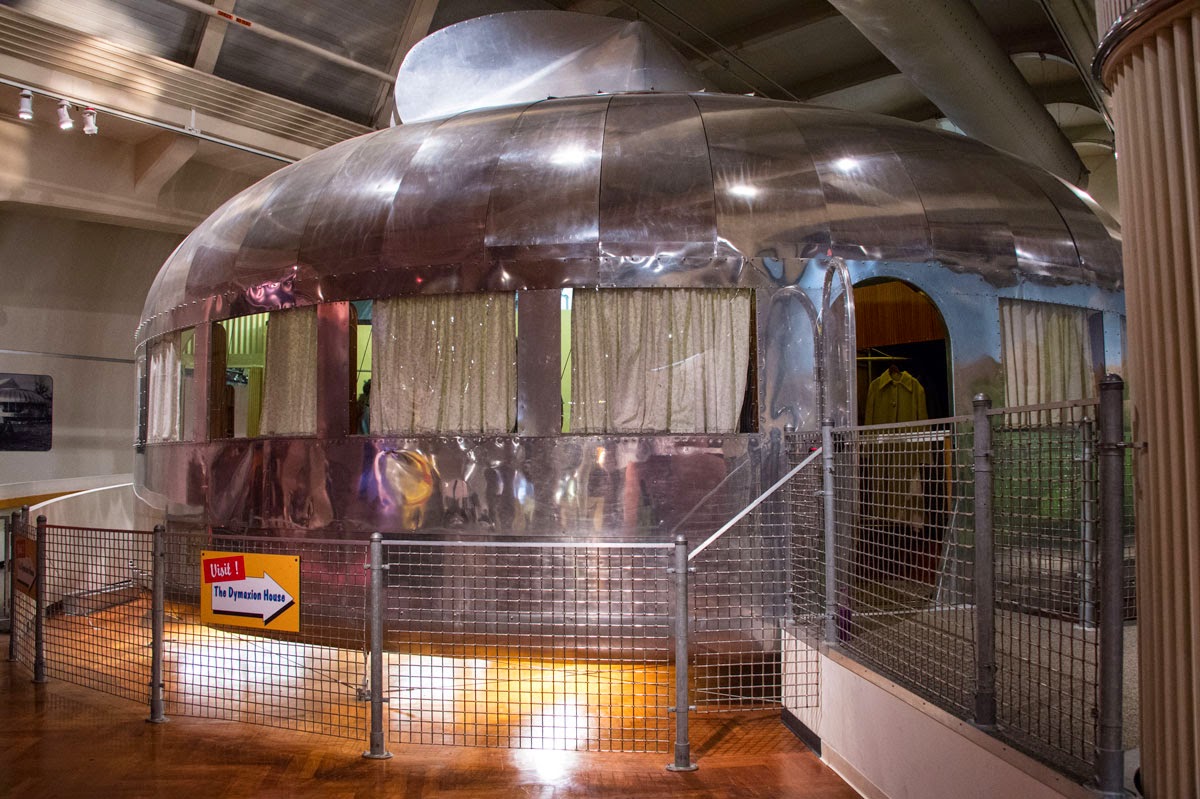 Not my cup of tea, it apparently wasn't anyone else's either, and I imagine it was partly because this is the entire kitchen, with a sink about 15 inches wide ... and you think your RV is small!!! 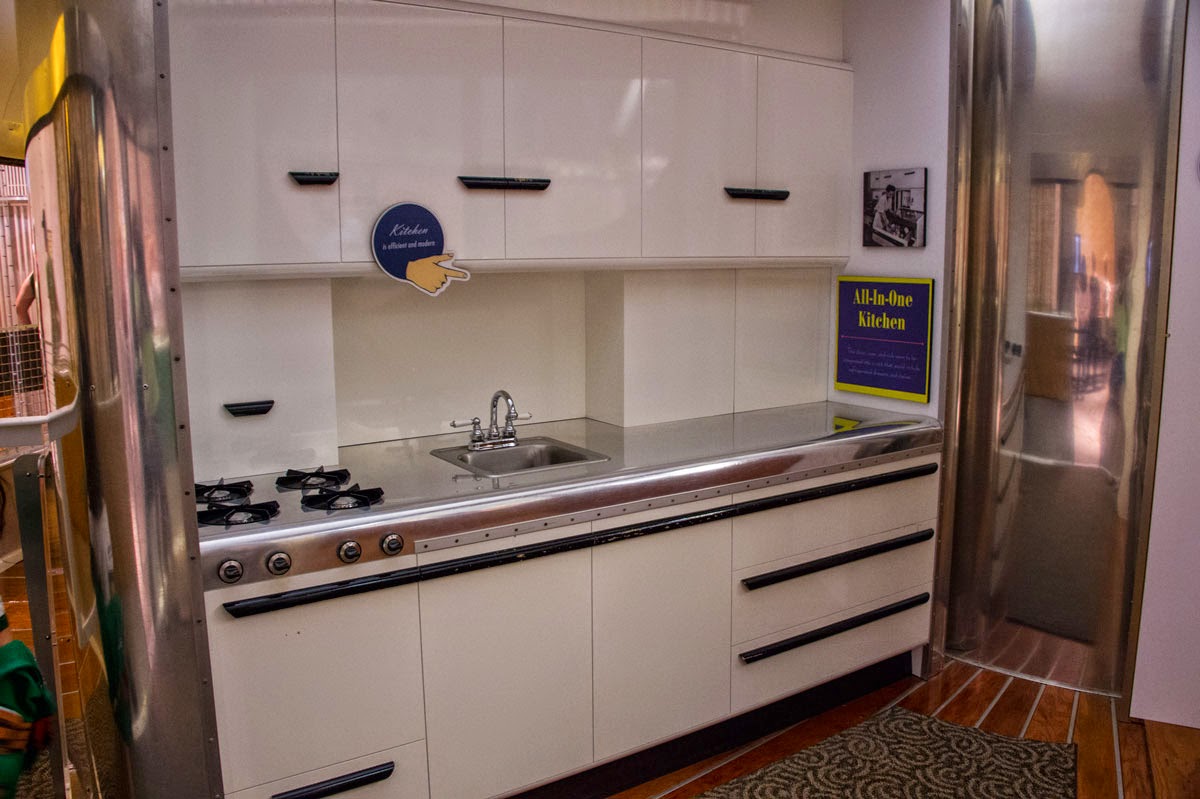 Then there is the display of airplanes, including a DC3 called Heroes of the Sky.  This one is mounted upside down as if in the middle of a wing walking performance!! 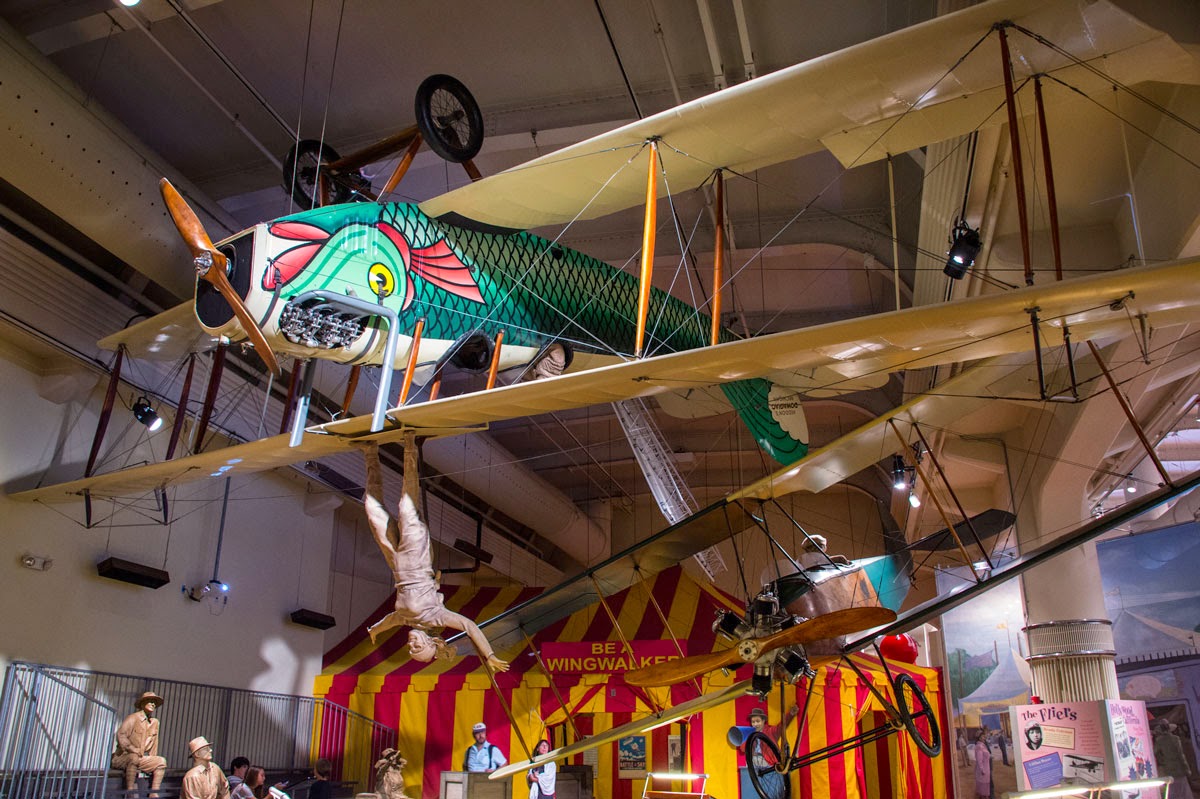 Planes, trains and automobiles ... someone spends many hours cleaning here.  I did not see one spec of dust or dirt on any of the exhibits, although a few oil pans were visible to catch the drips!! 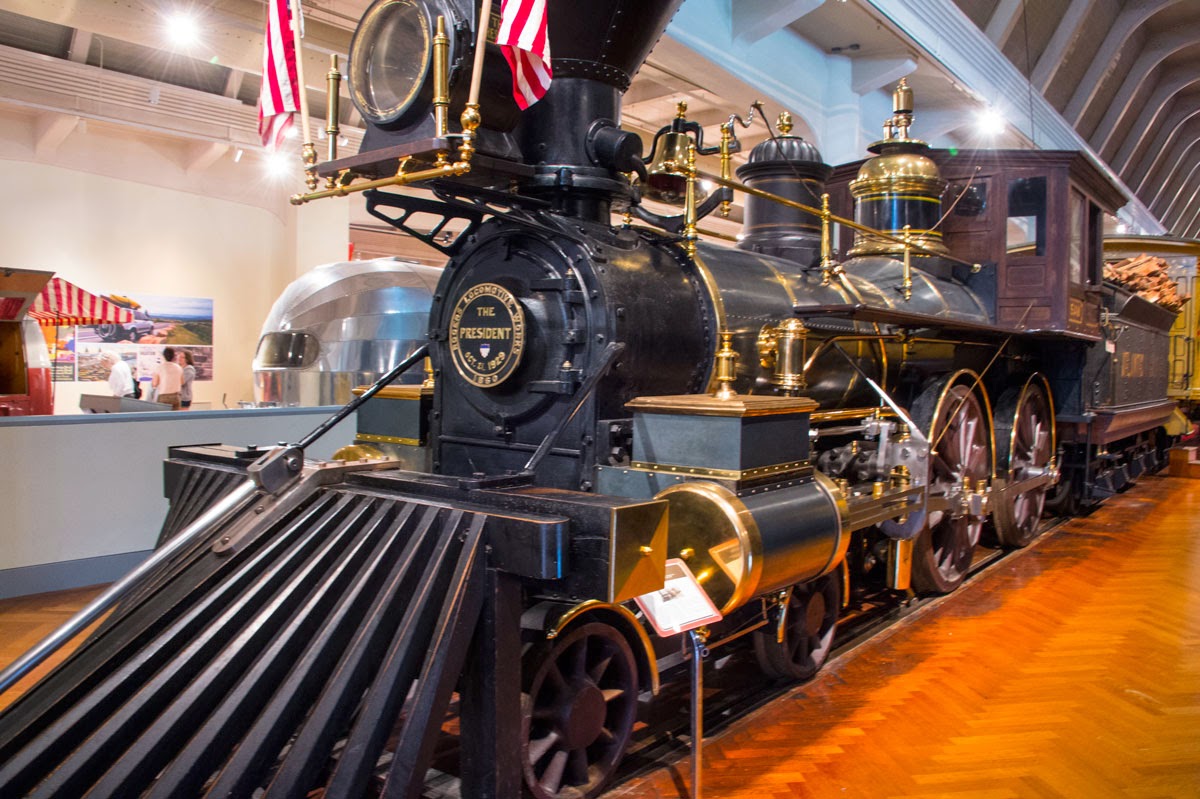 I think this was my favorite of the whole museum ... a steam engine that pulled stagecoaches down the tracks. 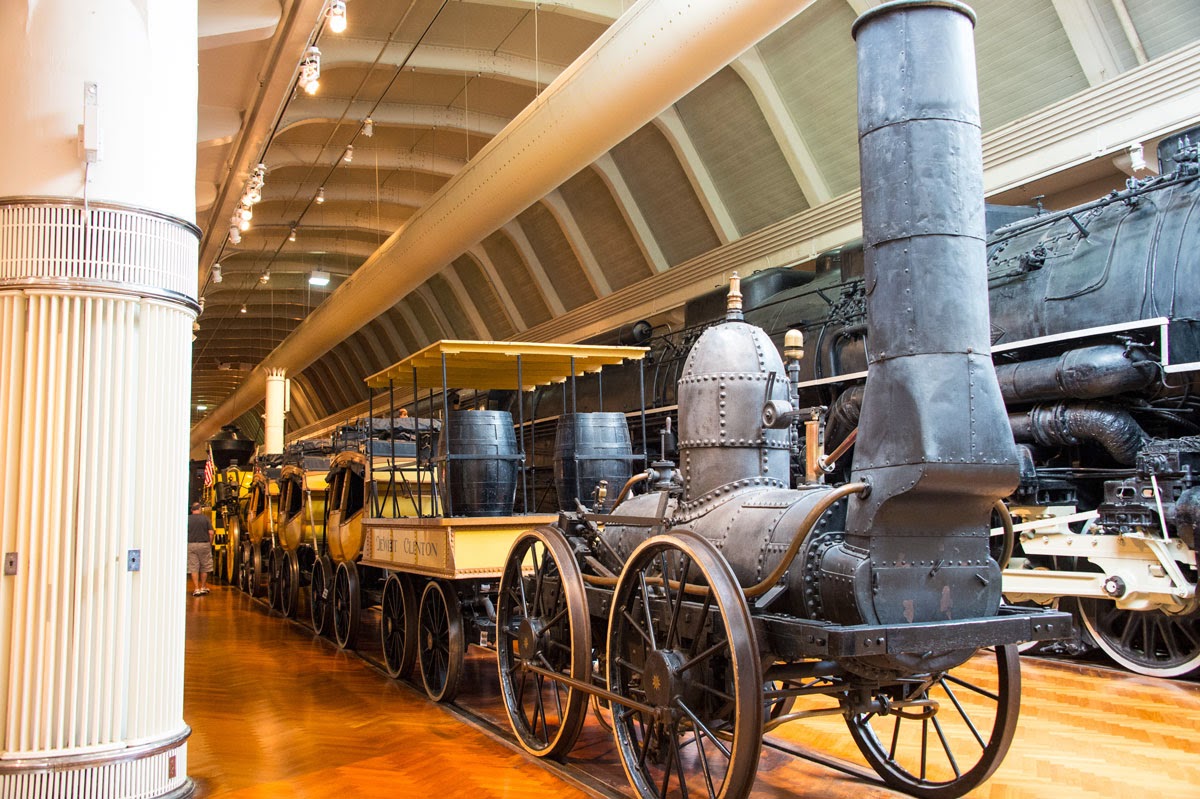 An interesting concept to say the least, but whoever had to sit on the tiny seats in the middle I'm sure didn't have a comfortable ride. 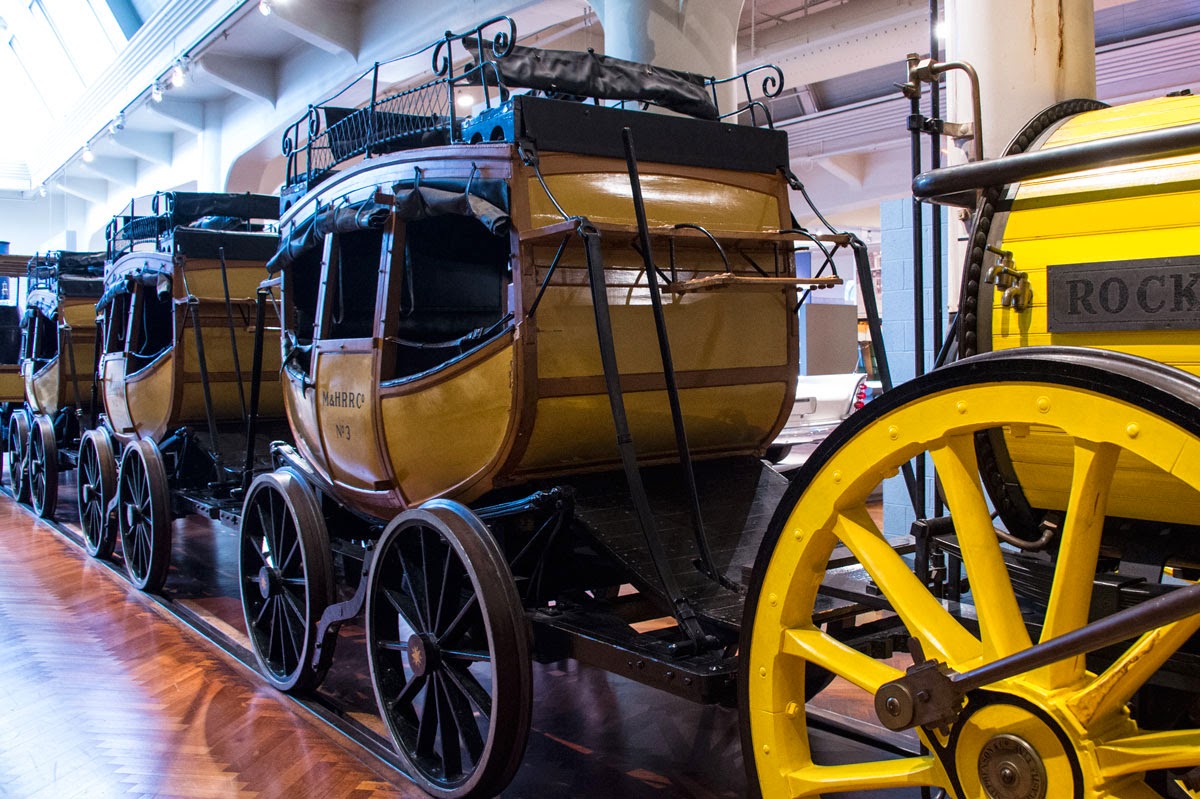 Then there was the real thing, the Pittman Brothers stagecoach!! 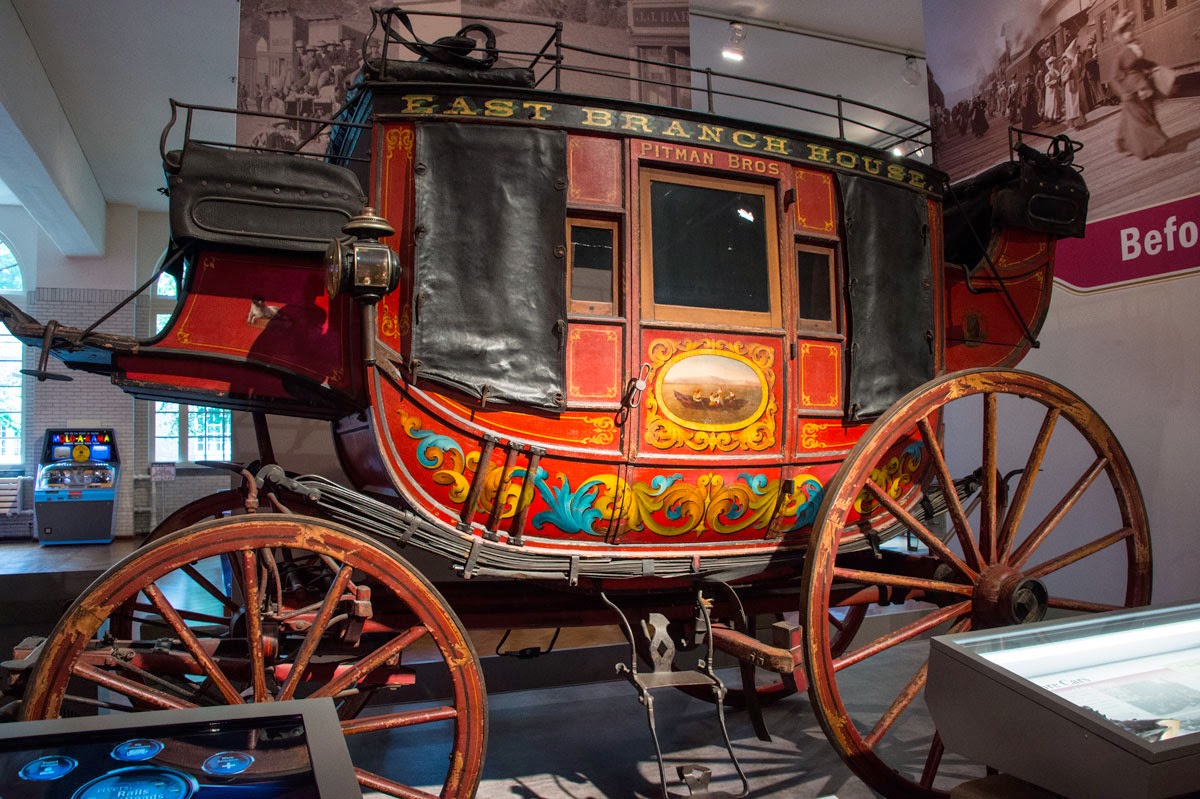 In the Driving America section they had a Chevy with a neon McDonald's sign and not to be left out, A & W Root Beer and White Castle.  Lamy's Diner just behind was resurrected and continues to serve sandwiches in the museum .... pretty good ones too!! 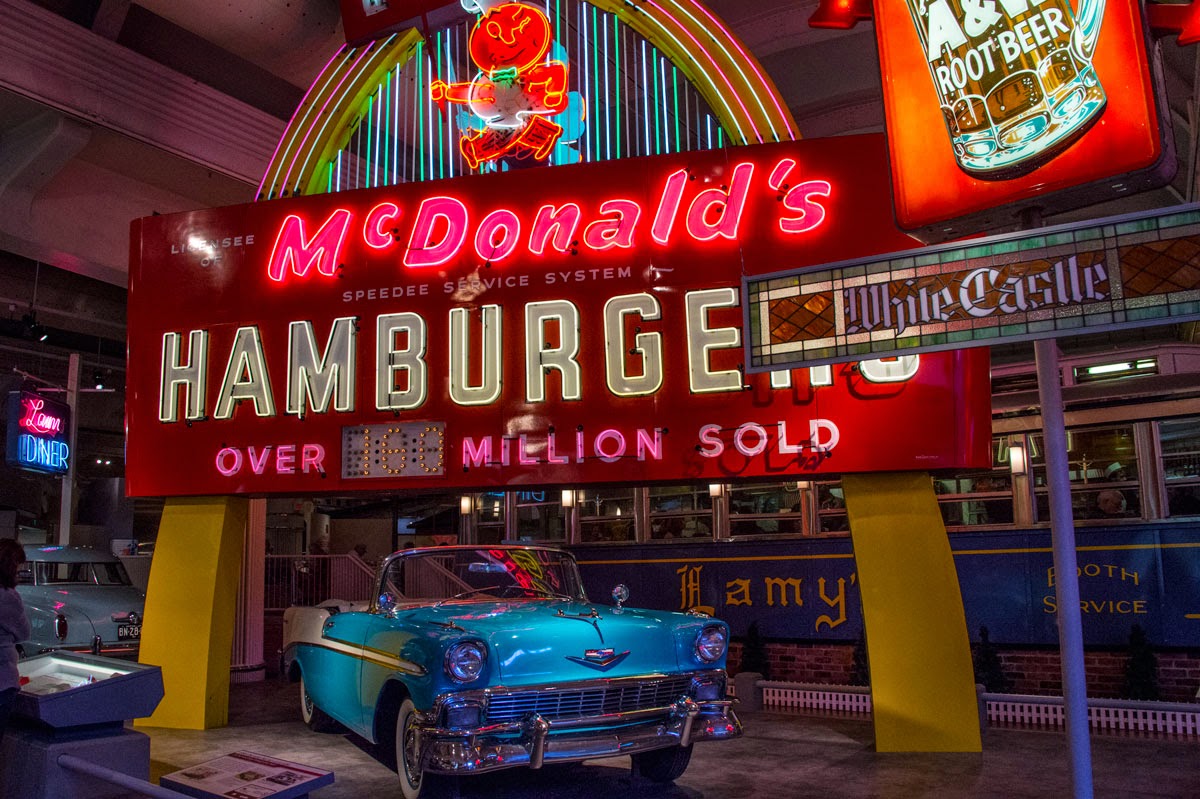 I missed Fully Furnished ... all about furniture design from old to new, the chair Lincoln was sitting in when assassinated and Rosa Park's bus.  This place is just huge and my feet were talking to me the entire time since walking about 20 miles the day before through Greenville Village. 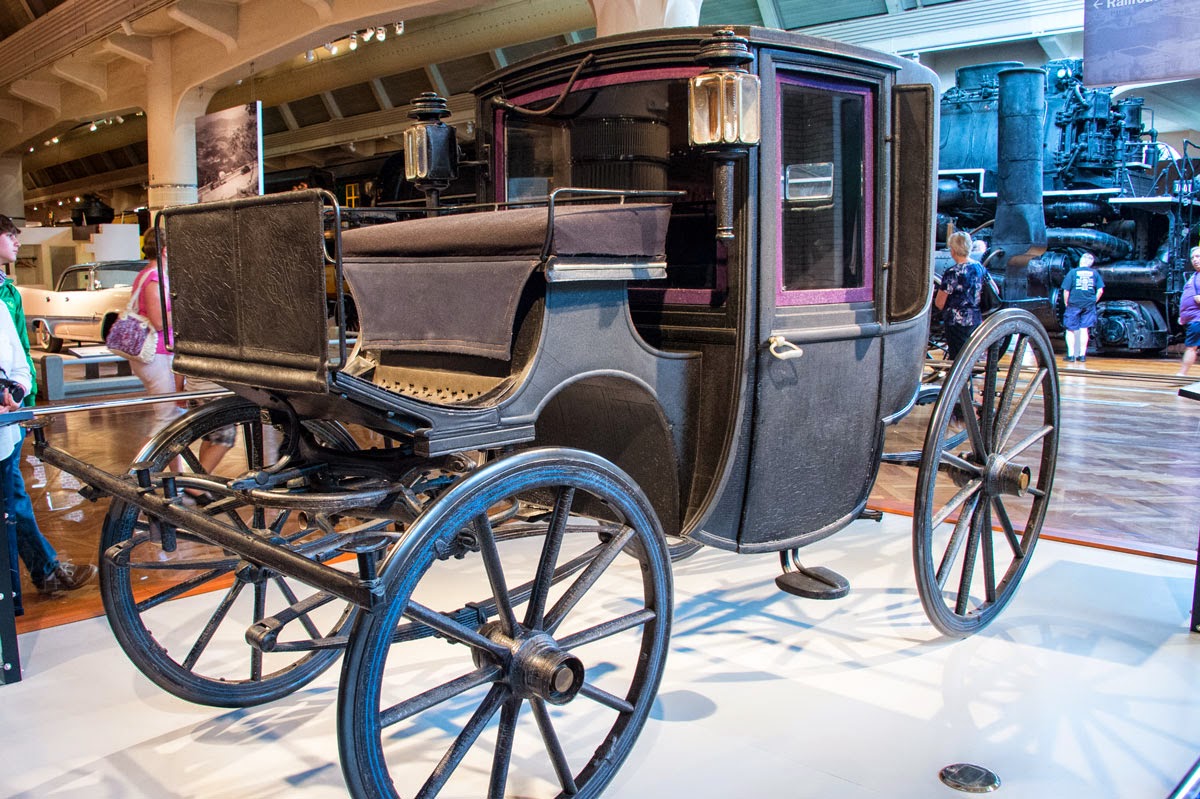 And Franklin Roosevelt's "Sunshine", a 1939 Lincoln, the first car built expressly for a President. 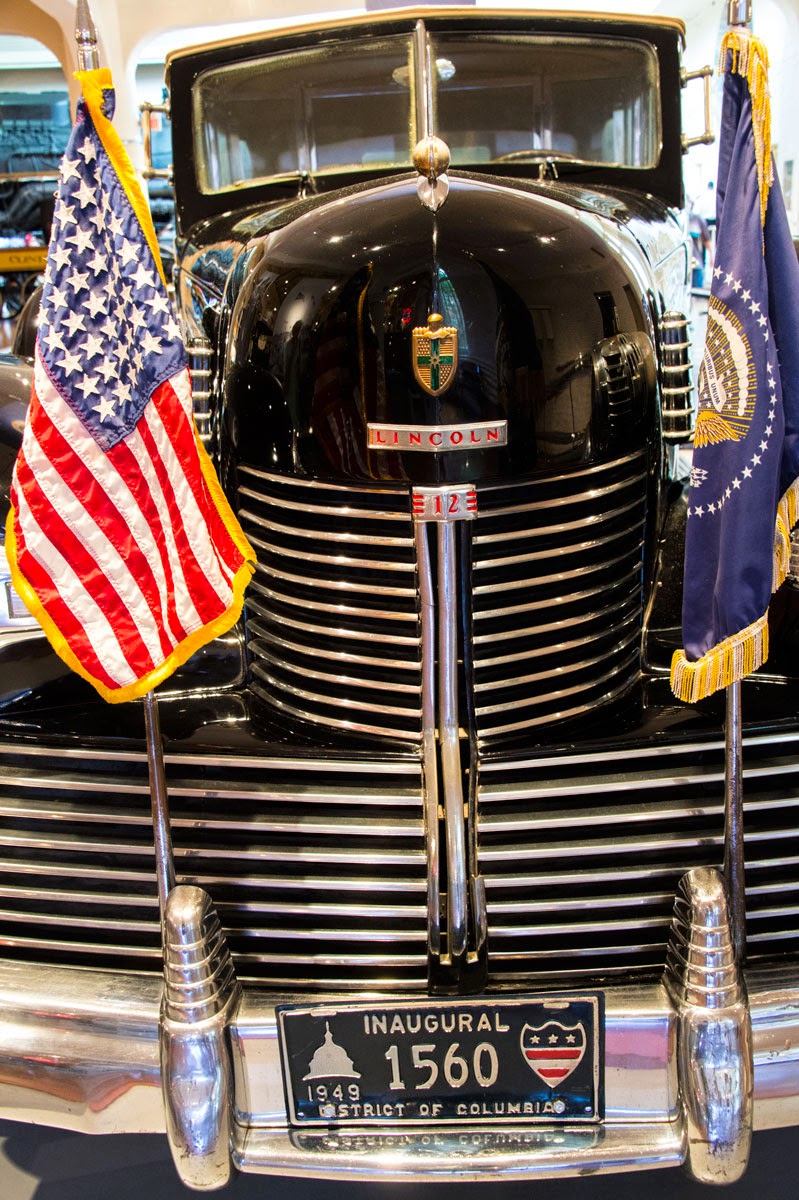 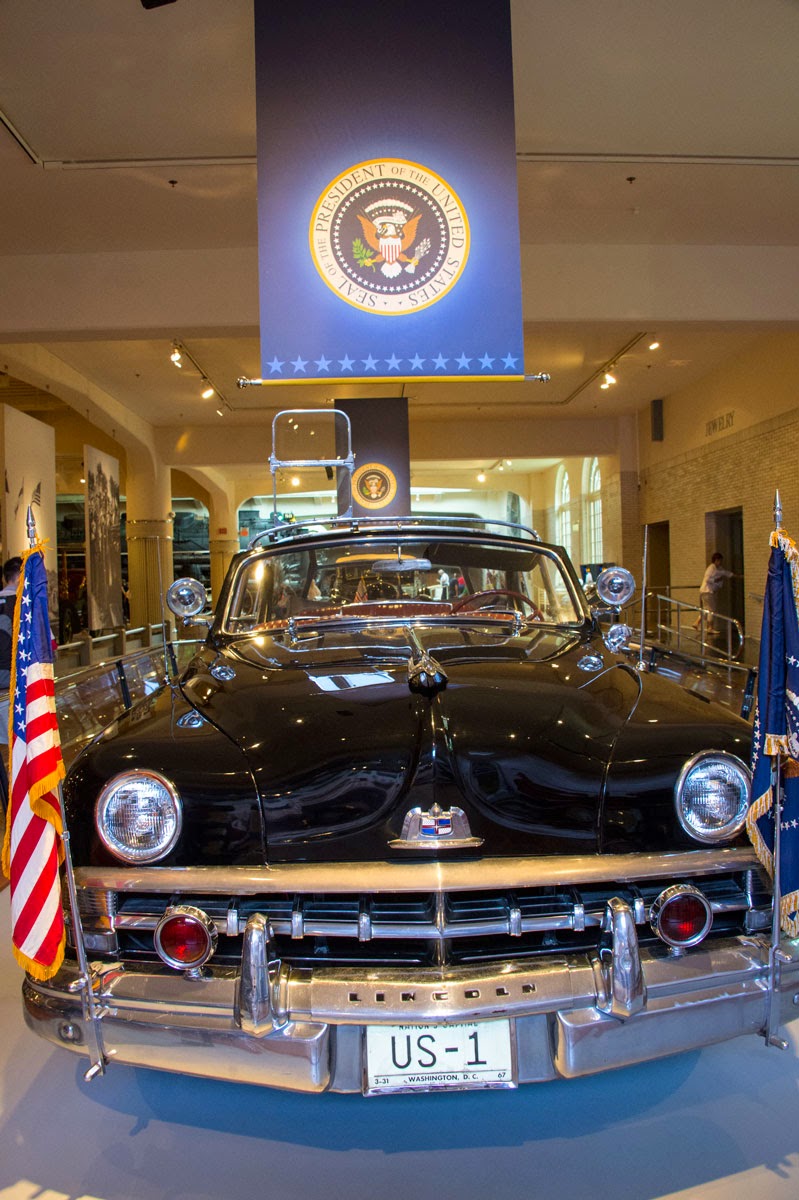 This was President Kennedy's 1961 Lincoln, the car he was assassinated in.   I imagine they leave the top up so as not to be "quite" so morbid.  There were more presidential cars you can see if you visit the museum. 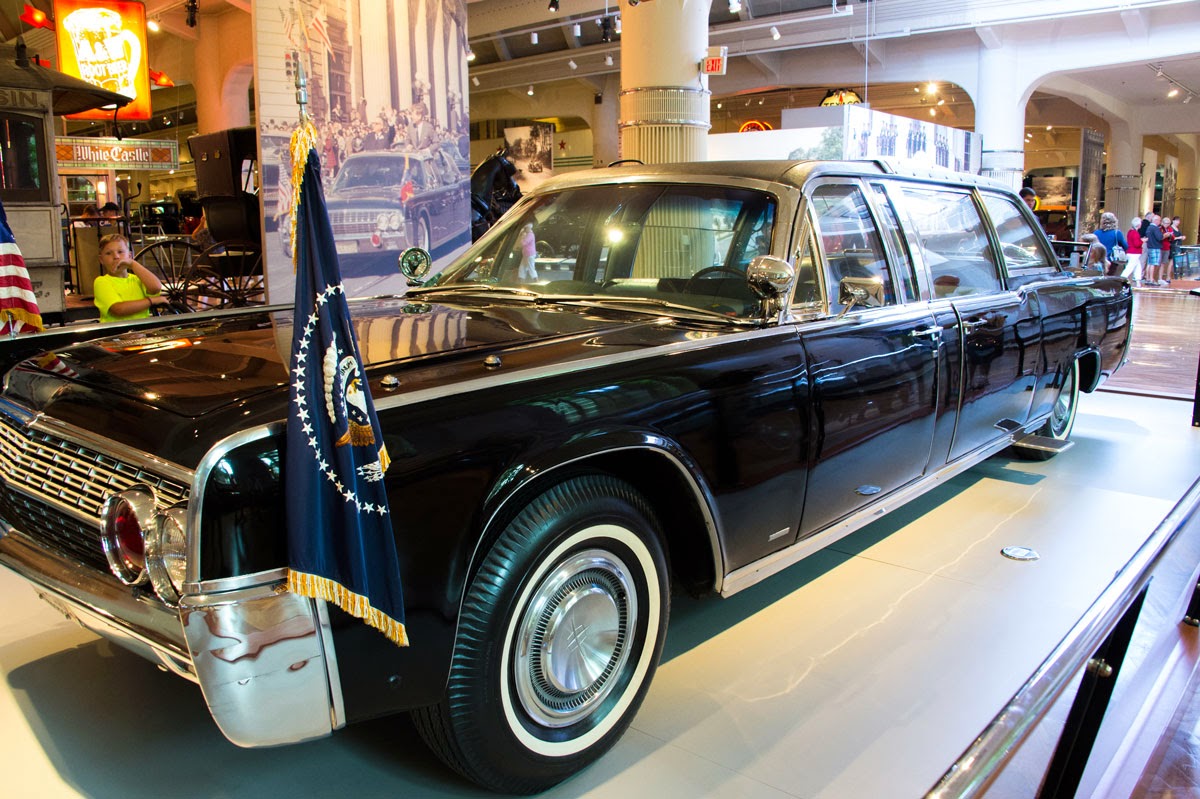 Barbara and I did a quick walkthrough of the clock section.  They definitely have LOTS of tall clocks and mantel clocks ... even some early alarm clocks.   None appeared to be working, but I imagine it would have been a full time job to keep them all wound!! 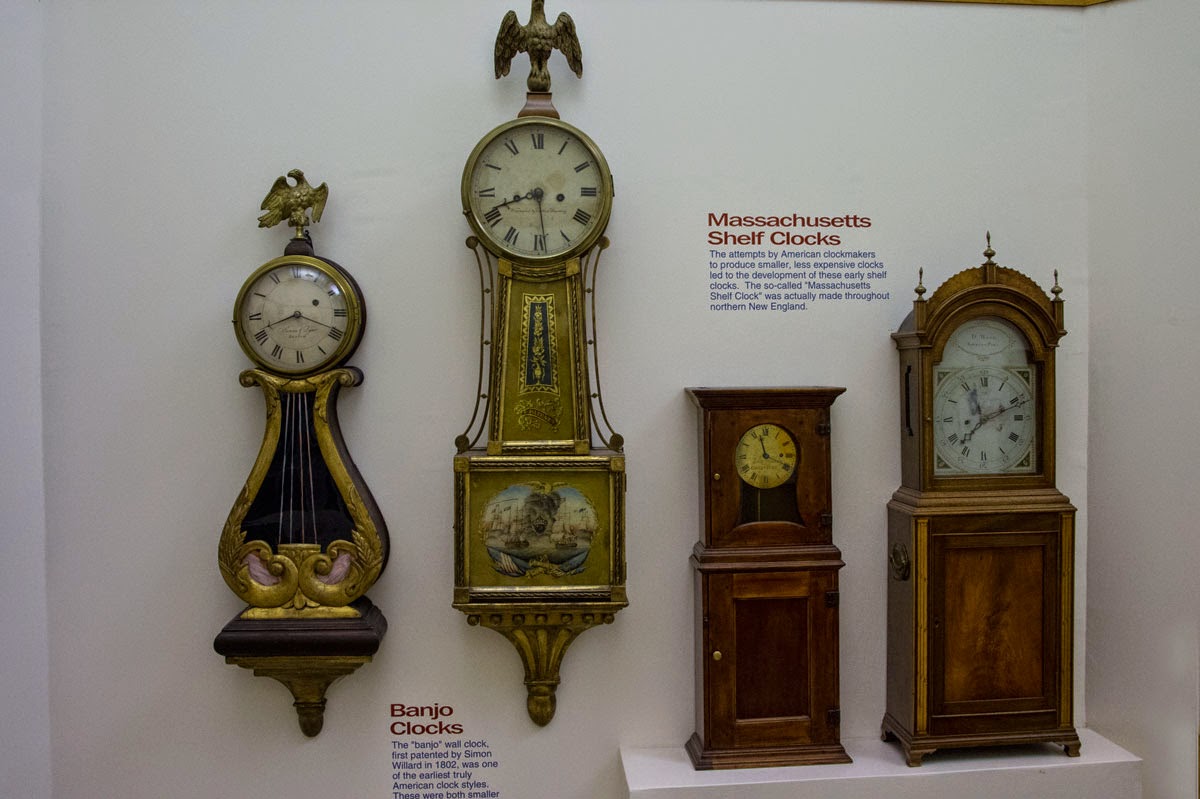