With the rain temporarily on hold, we stopped in at the Antique Boat Museum in Clayton, New York.  This is actually the back yard, where you can have a seat on a beautiful adirondak chair and watch the boats.  It was rather windy, in fact so windy I probably wouldn't want to take a canoe out, but you can if you inquire inside. 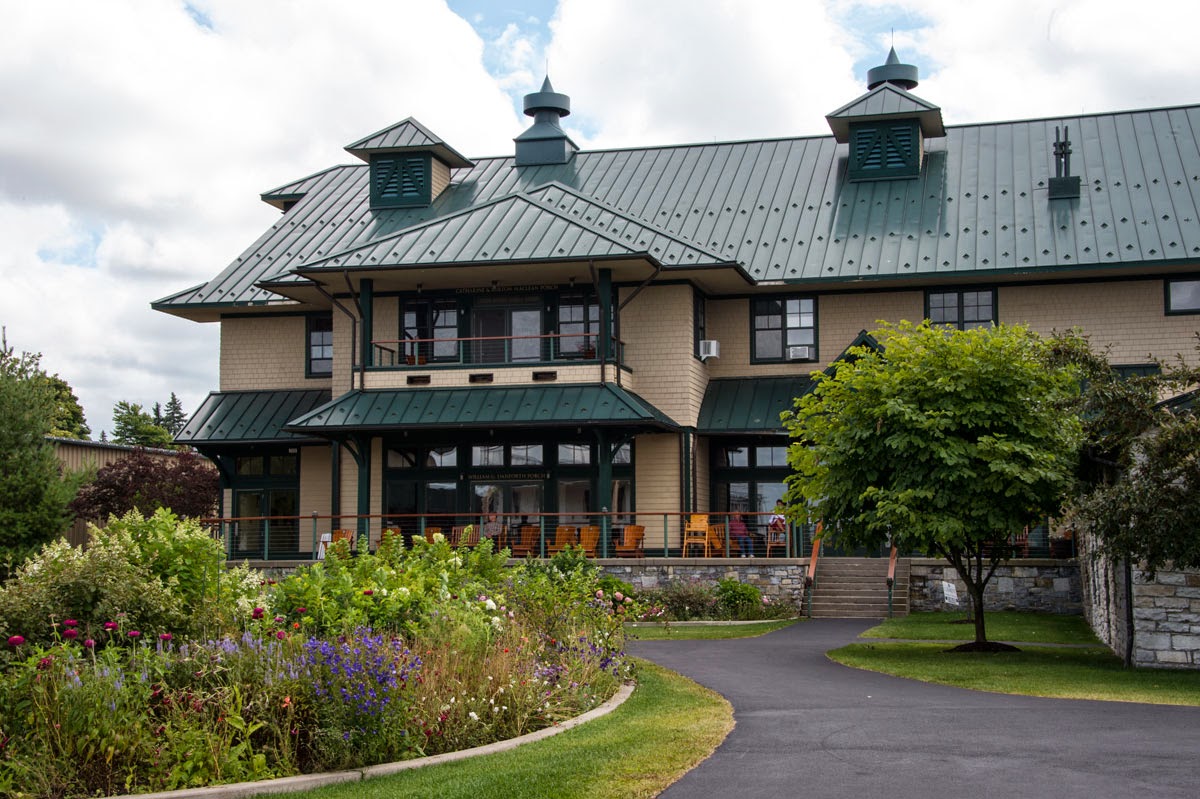 The first building about early pioneers and traveling the world, had this canoe that was paddled by a man and his son all the way to the Amazon.  They were arrested and almost killed several times, but survived to tell their paddling story. 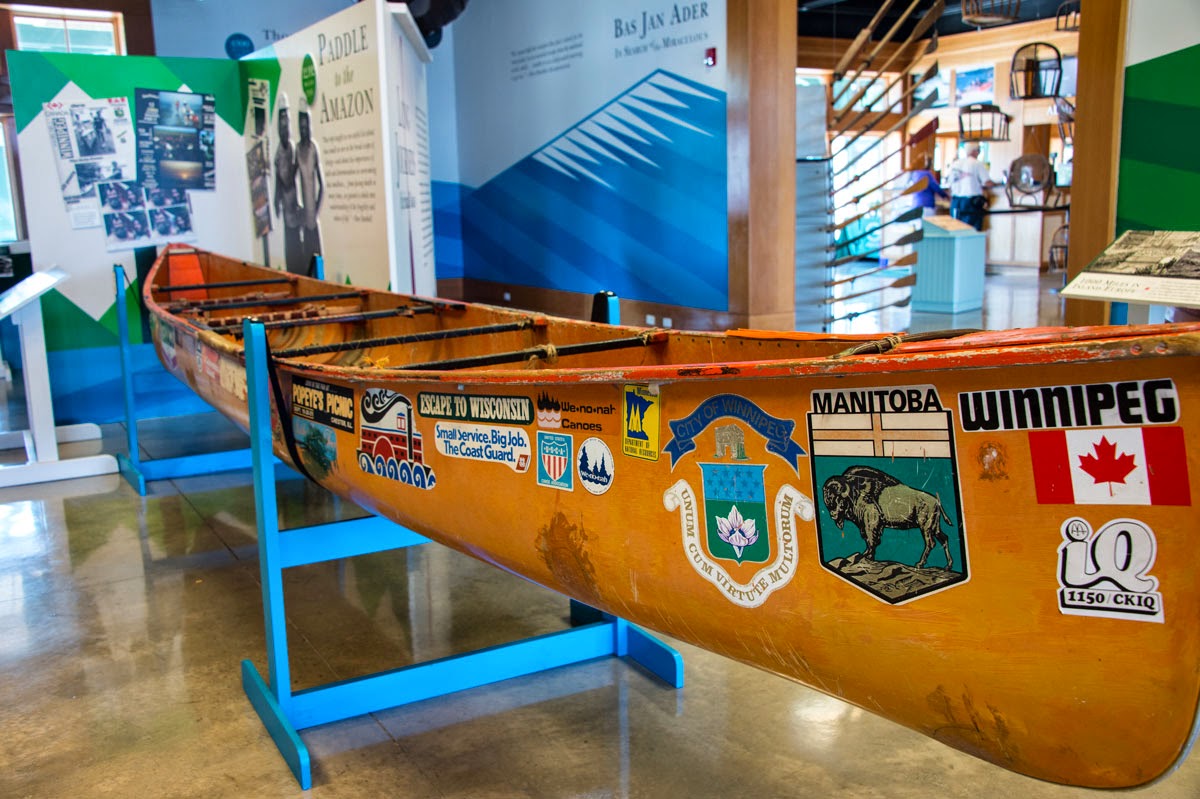 In the large rock building outside (what remains of a lumber mill that caught fire), we saw these two canoes.  The right one is brand new, just being lacquered on the inside.  The one on the left that's being restored is from the early 1900's and sports a couple rather large holes. 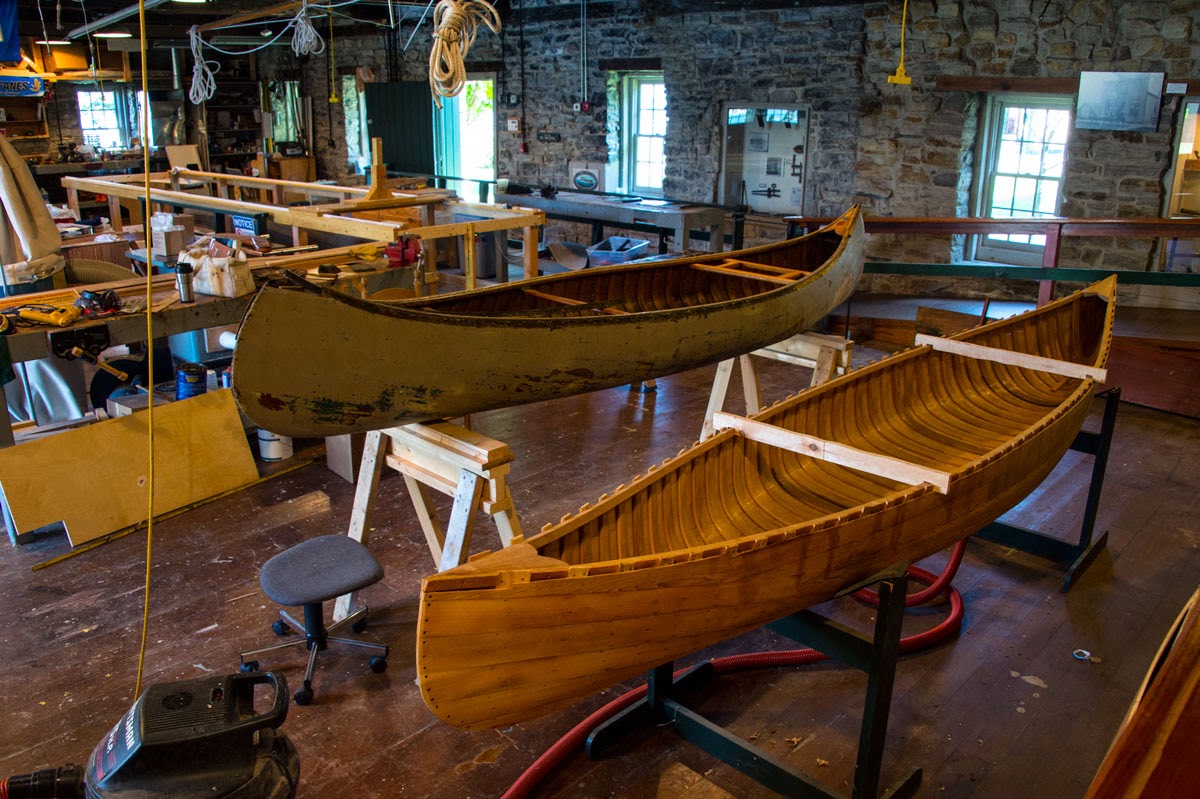 Barbara and I met Dan Miller here, Wooden Canoe Journal Editor, previous curator of the Antique Boat Museum, as he was putting another coat on the new canoe he was building.  We learned a lot about how they are made, including being placed over a metal frame that automatically clinches the nails when you hammer them in.  You can make one too ... they actually have two week classes. 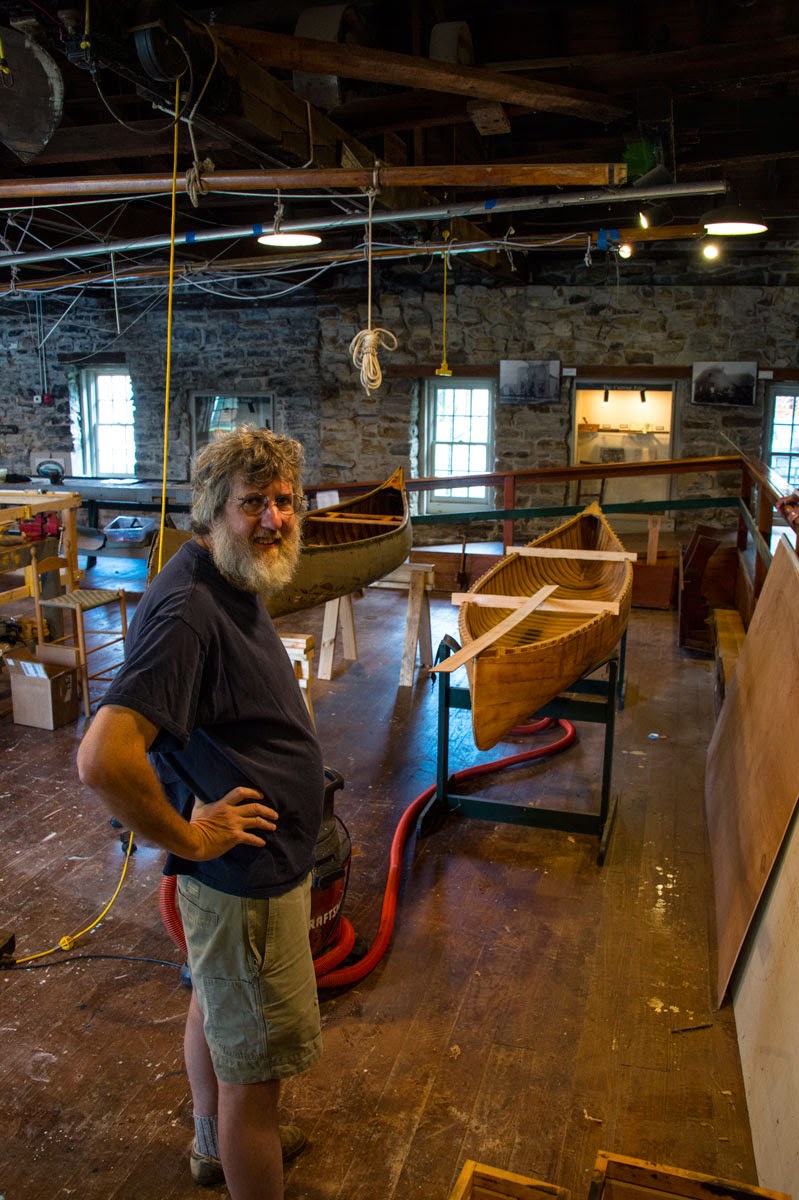 There are MANY kinds of canoes, mostly very old, including this one made of birch bark that appeared to be made without nails. 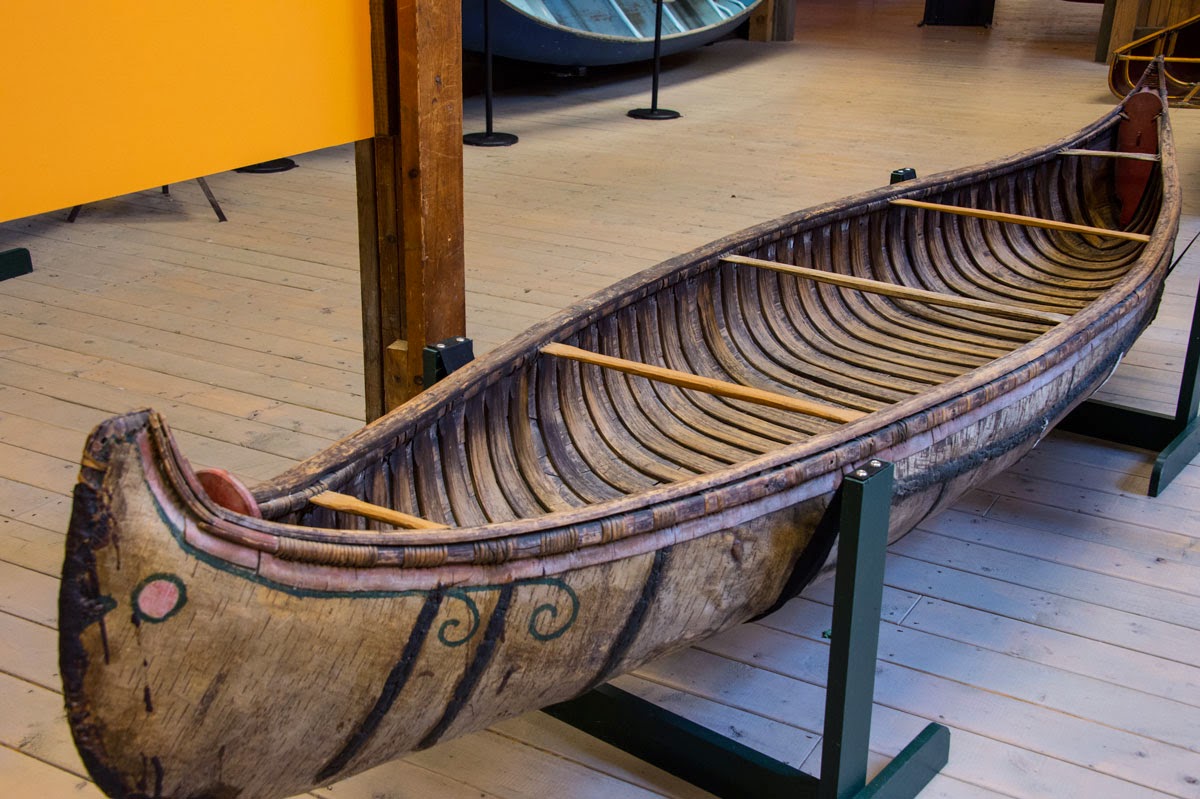 The wood work on these boats is amazing ...  you can even sail them if you install the rigging. 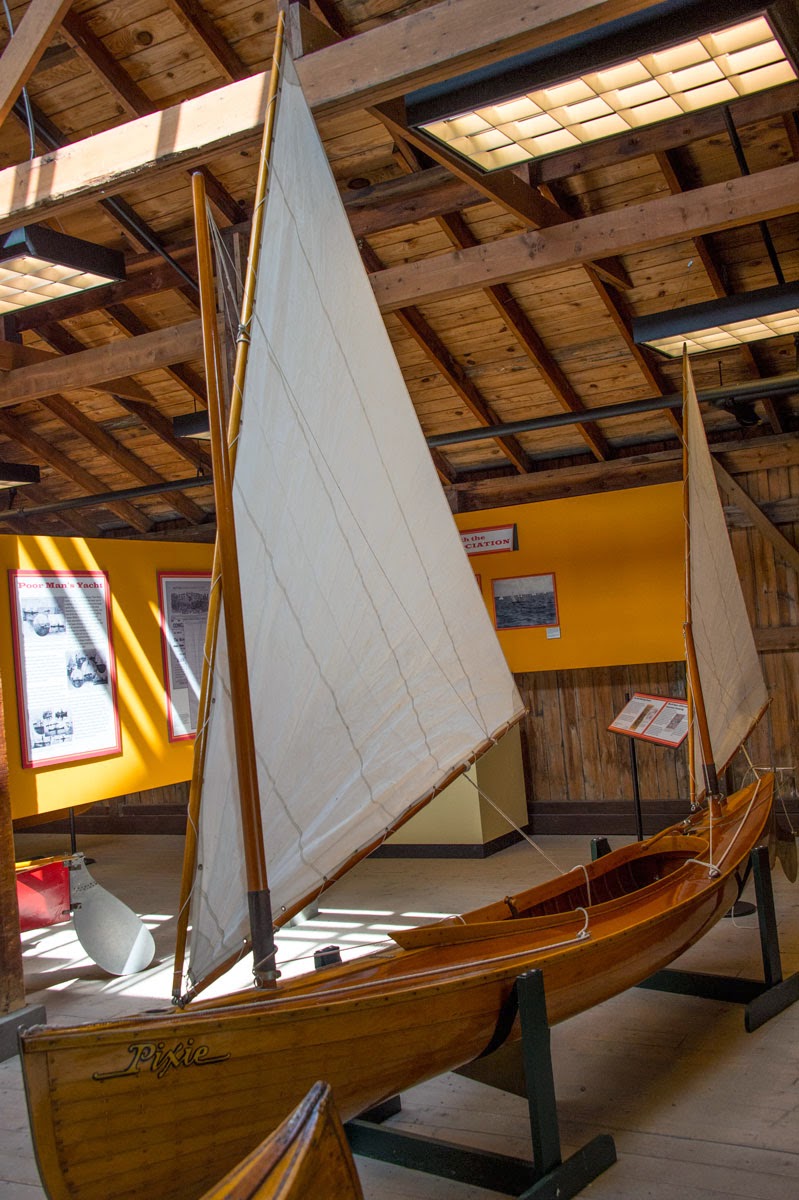 This stunning example was built for Marianne Lyons Fisher.  The detail is amazing, including her initials in the seat. 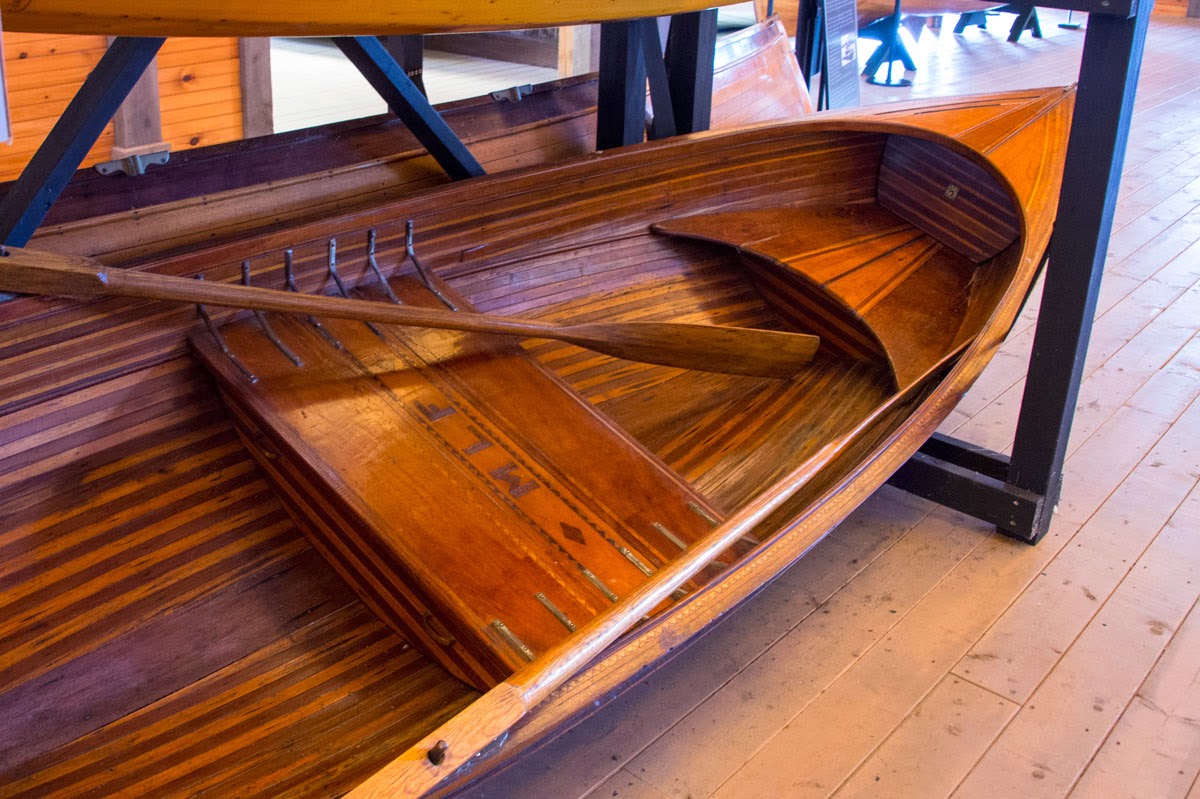 The woodwork is just beautiful and the work of many different builders is showcased here.  I mean REALLY detailed ... Tom noticed every single screw head is turned the same direction. 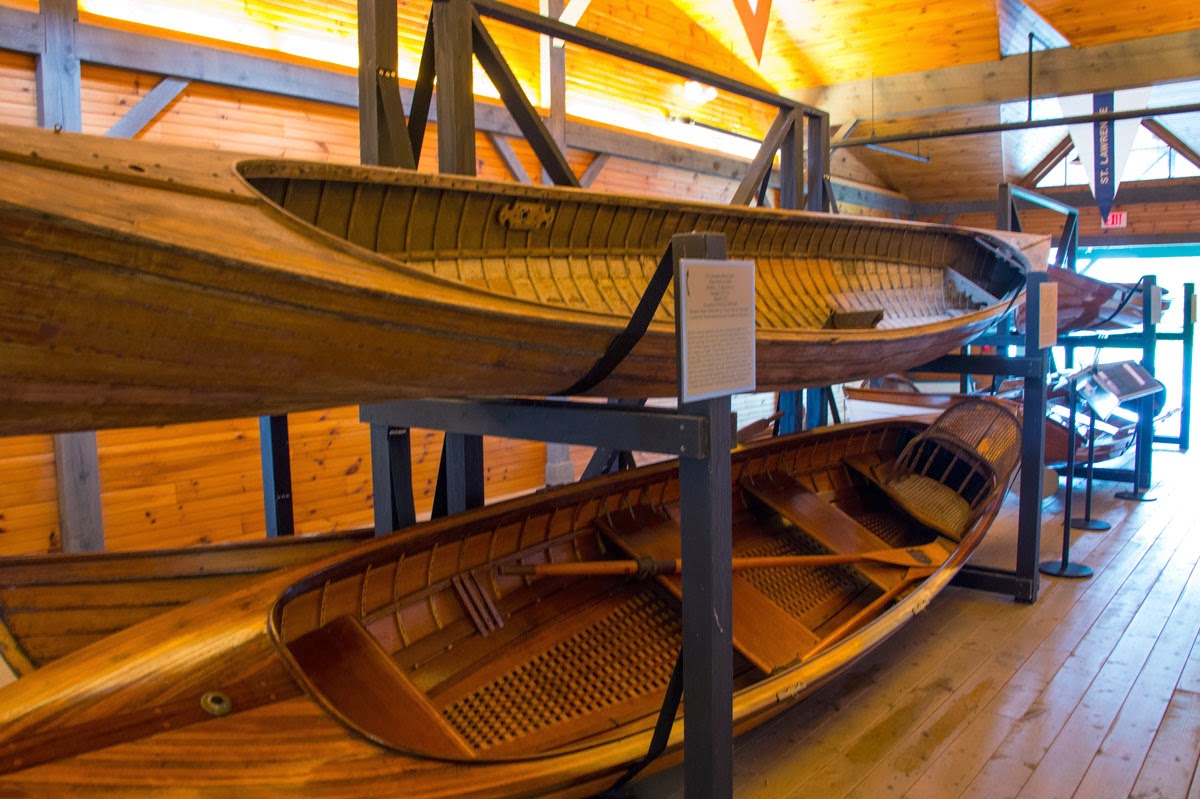 This boat, the Indian Summer II was built by the Aykroyd Brothers ... uncles of Dan Aykroyd, of Ghostbusters and Blues Brothers fame!! 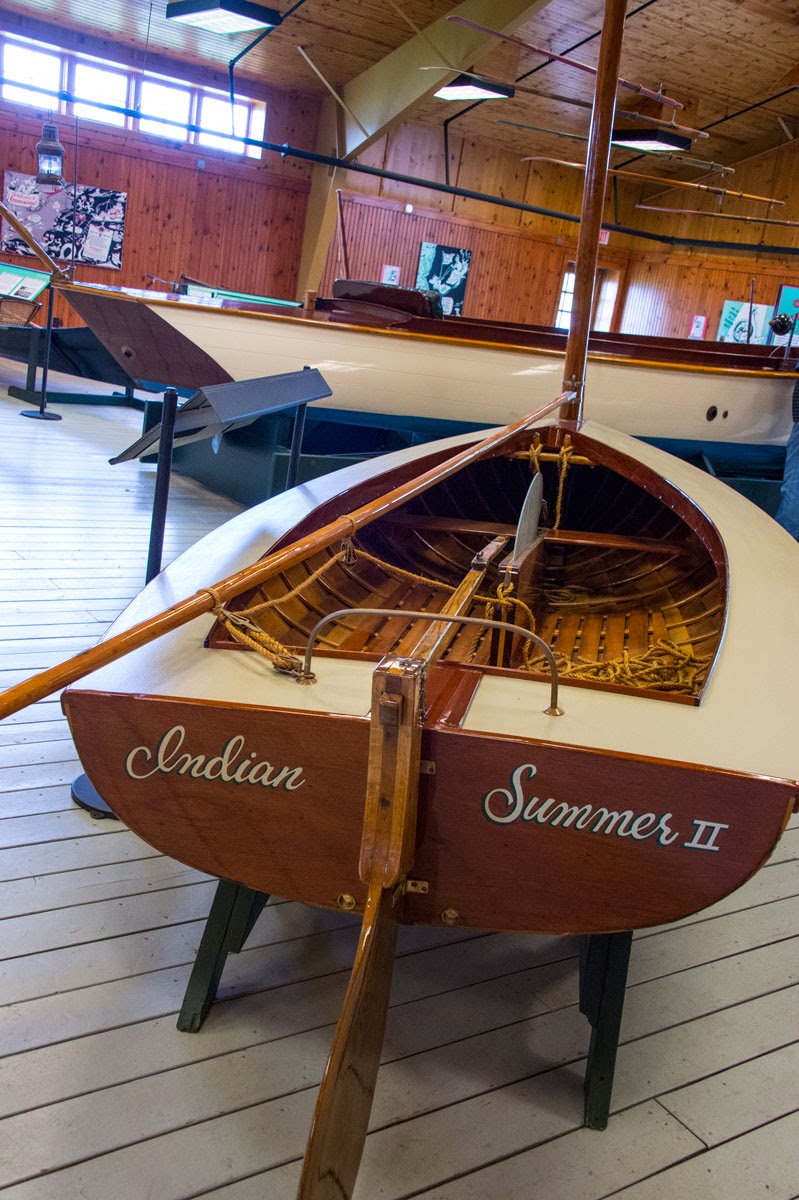 Also at the Antique Boat Museum is the Boldt houseboat.  It was sunk in the Yacht House (about 4' deep) for several years before being purchased, resurrected and remodeled, then it sank again.  With a new steel hull, it finally ended up here where it is being restored, and you can tour the entire boat.  Well actually, it's not a boat ... it's a barge that had it's own tugboat to pull it wherever they wanted to go.  Today it just sits here for our enjoyment. 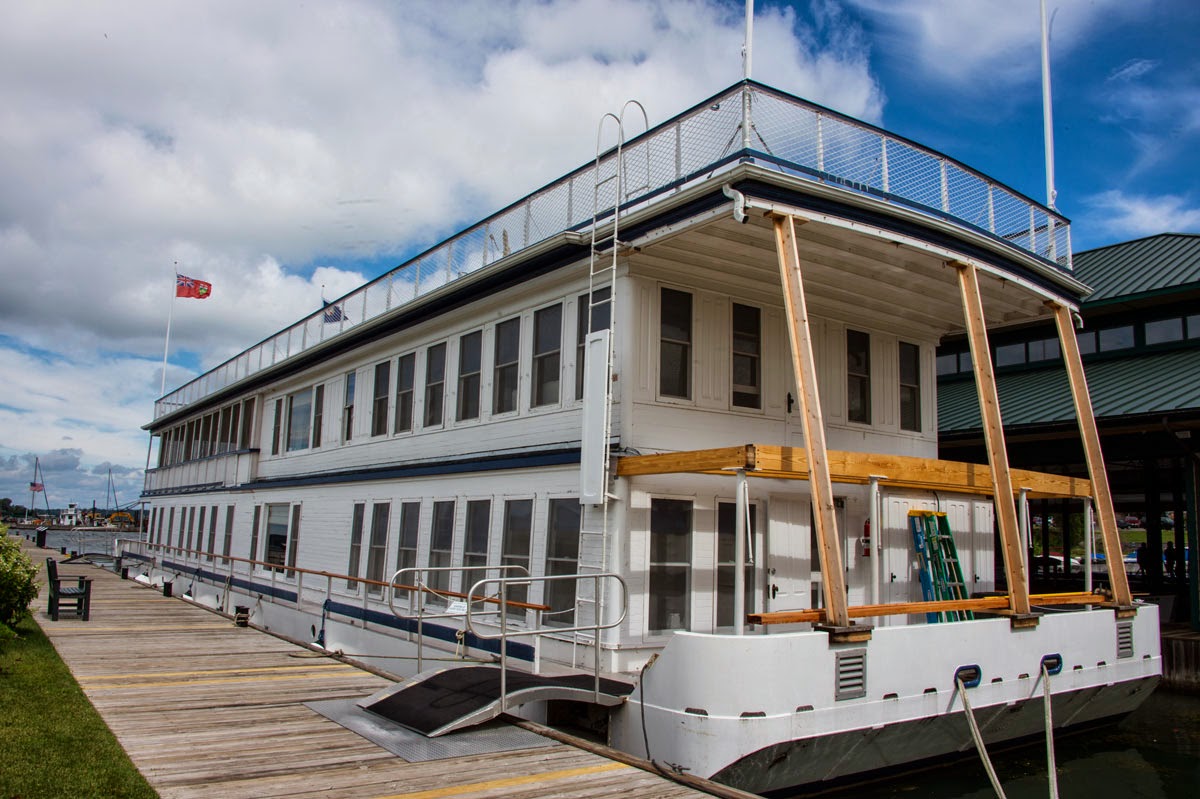 Most of the inside is beautiful woodwork ... this long hallway has servants quarters on the left, a huge kitchen on the right along with some guest rooms, all of which have sinks and adjoining bathrooms with ball and claw tubs.  NICE!!! 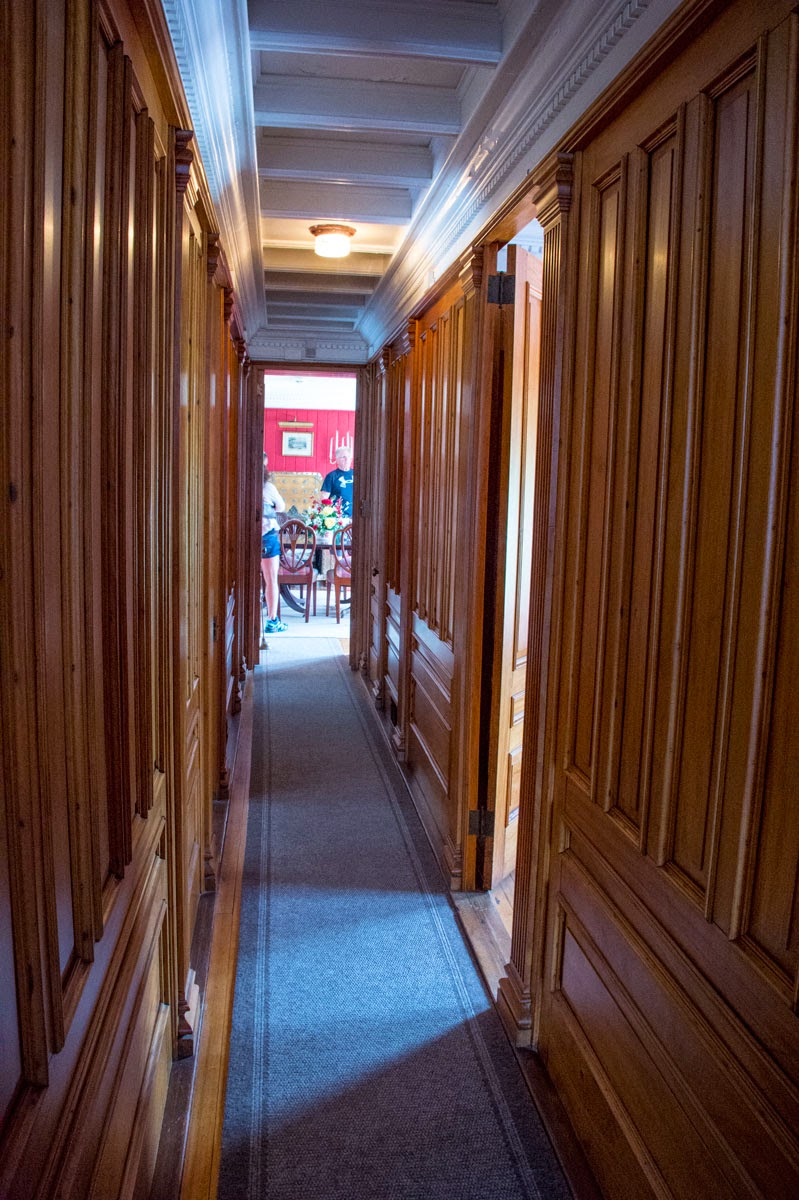 Here's an example of guest quarters.  The second owner did take many of the items off the houseboat, but a few have been returned.  All the woodwork is original.  Upstairs are the larger owner's bedrooms, sitting room and bathrooms. 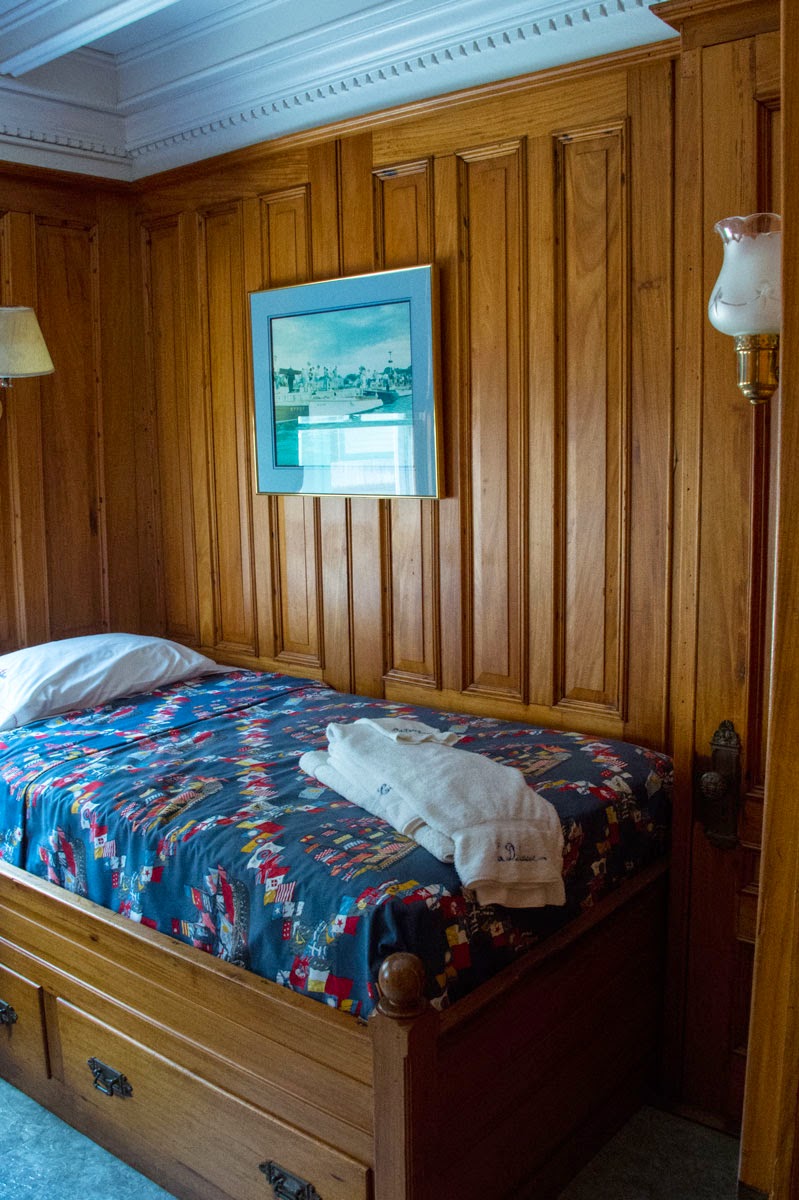 On the back is a beautiful skylight over a piano, in a room filled with wicker furniture. 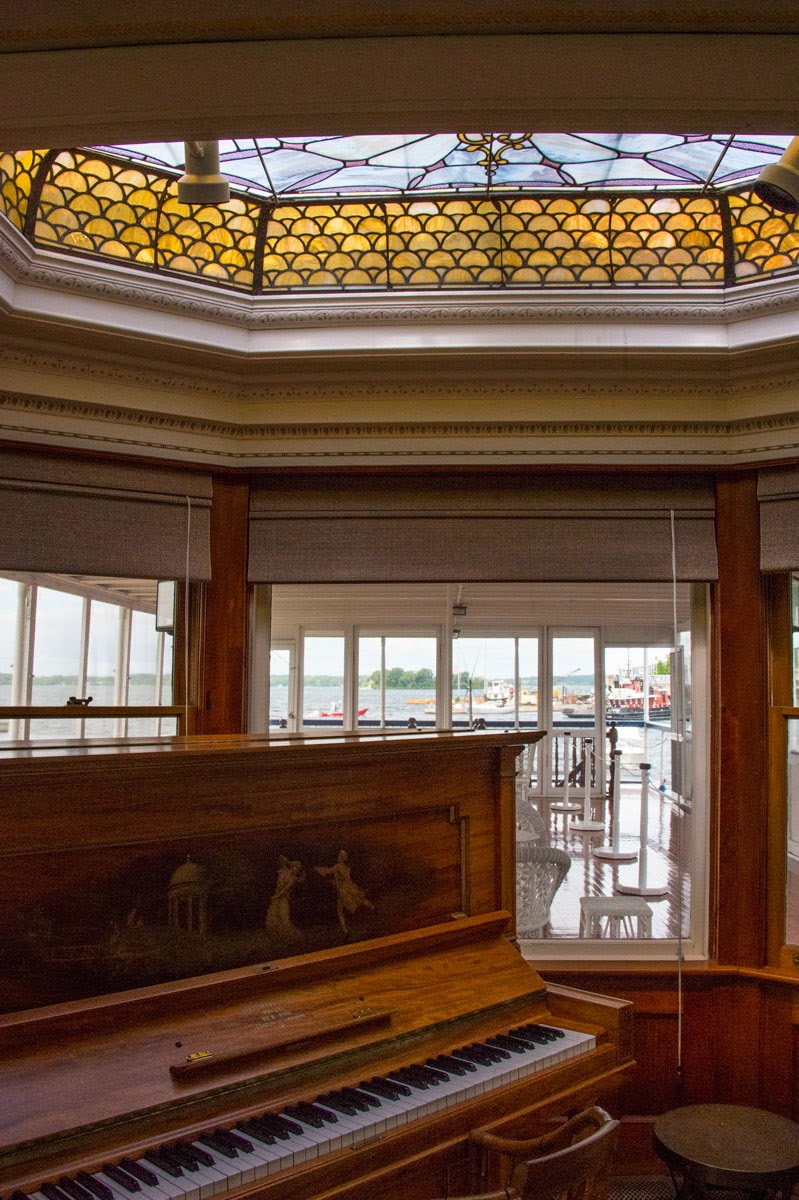 This is what it looked like many years ago.  Most of this wicker furniture is still sitting in this room for you to see. 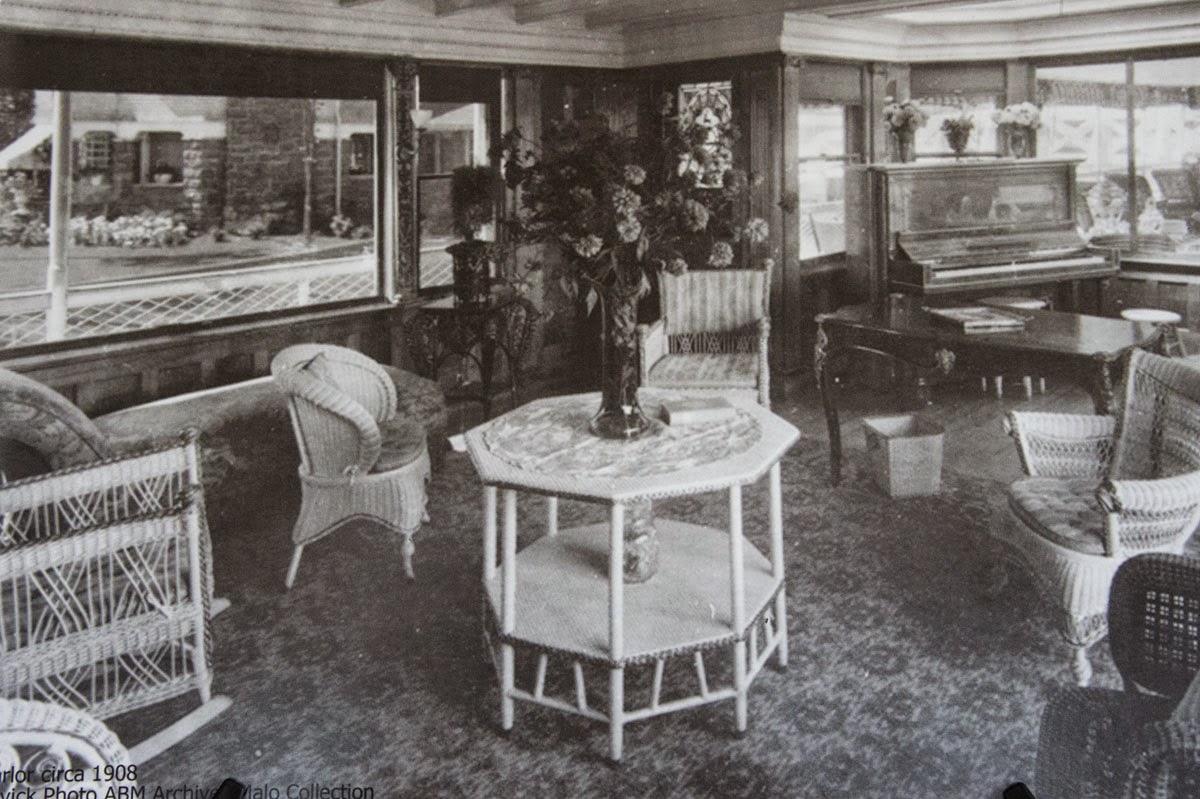 The large back deck/screened porch sports a dance floor that saw many parties in the early 1900's. 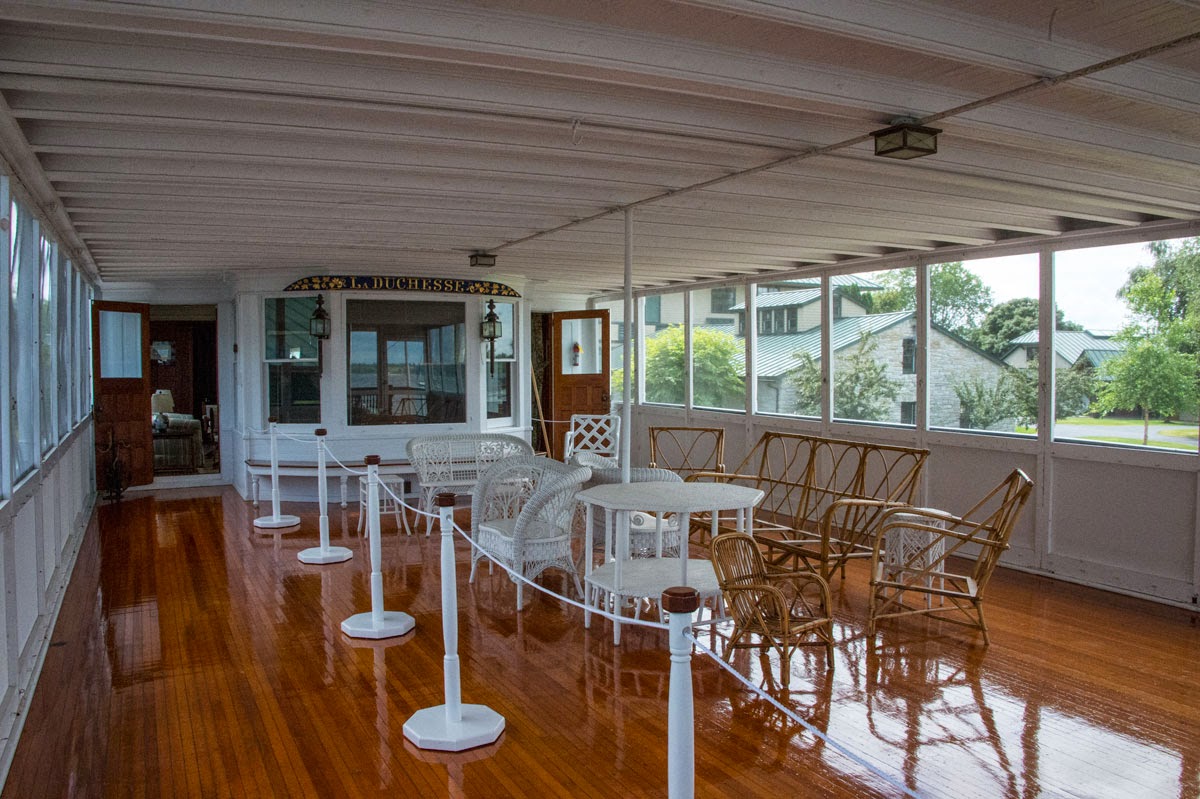 Back outside, another building houses wooden motorboats such as this one with the engine sitting in the middle of the boat.  Isn't it supposed to be in the back??  There are even pictures of people riding in this exact boat.  Little did I know that each one built has a number plaque, and although some have been lost, most boat makers kept exact records on who bought the boat and when!!  You can even trace the history on many of the canoes. 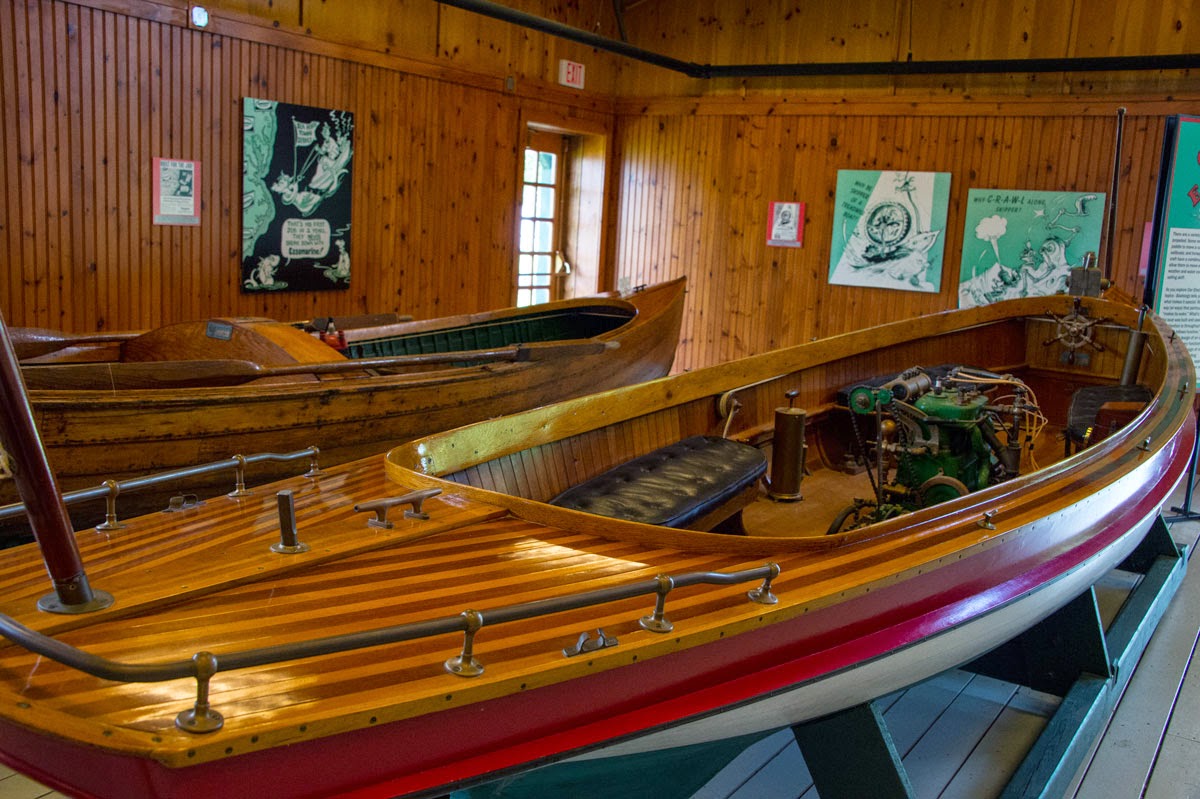 Across the street is the "Speed" building, housing speed boats and hydroplanes, if that's your thing!!  Personally, I liked the canoes ... so much that next summer I'll try to look up some of the Northwest builders.

As we left Walmart, Barbara spotted an Amish wagon at the Tractor Supply Store next door, and we passed a couple of rigs on the road. 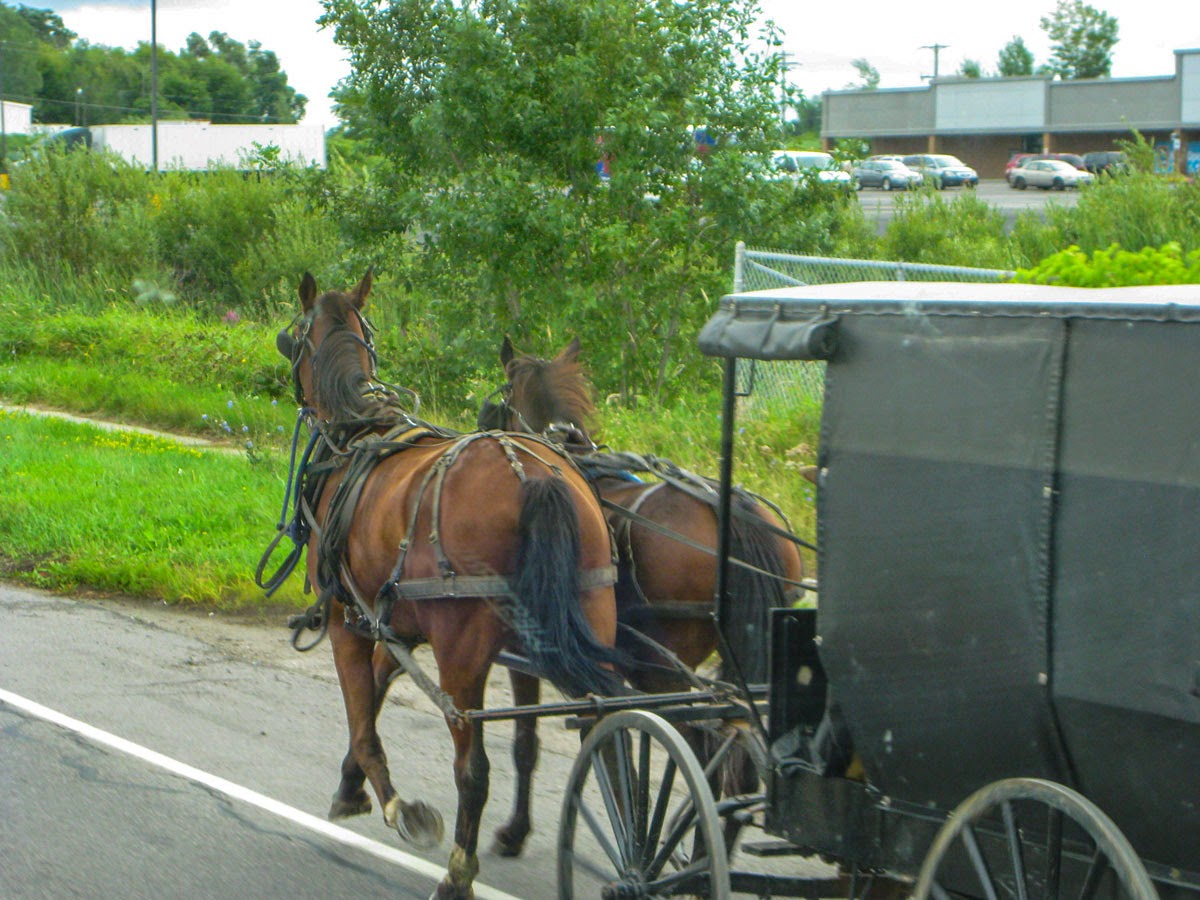 The countryside is beautiful as we headed into Vermont. 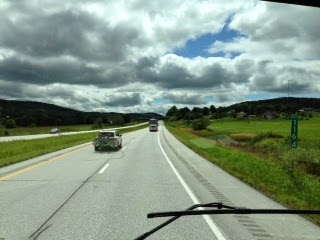 I took this picture of the little town building, just as we were closing in on Lake Champlain, and didn't notice the two State Troopers sitting on the side.  You definitely have to watch your speed around here ... Troopers were everywhere, many writing tickets!! 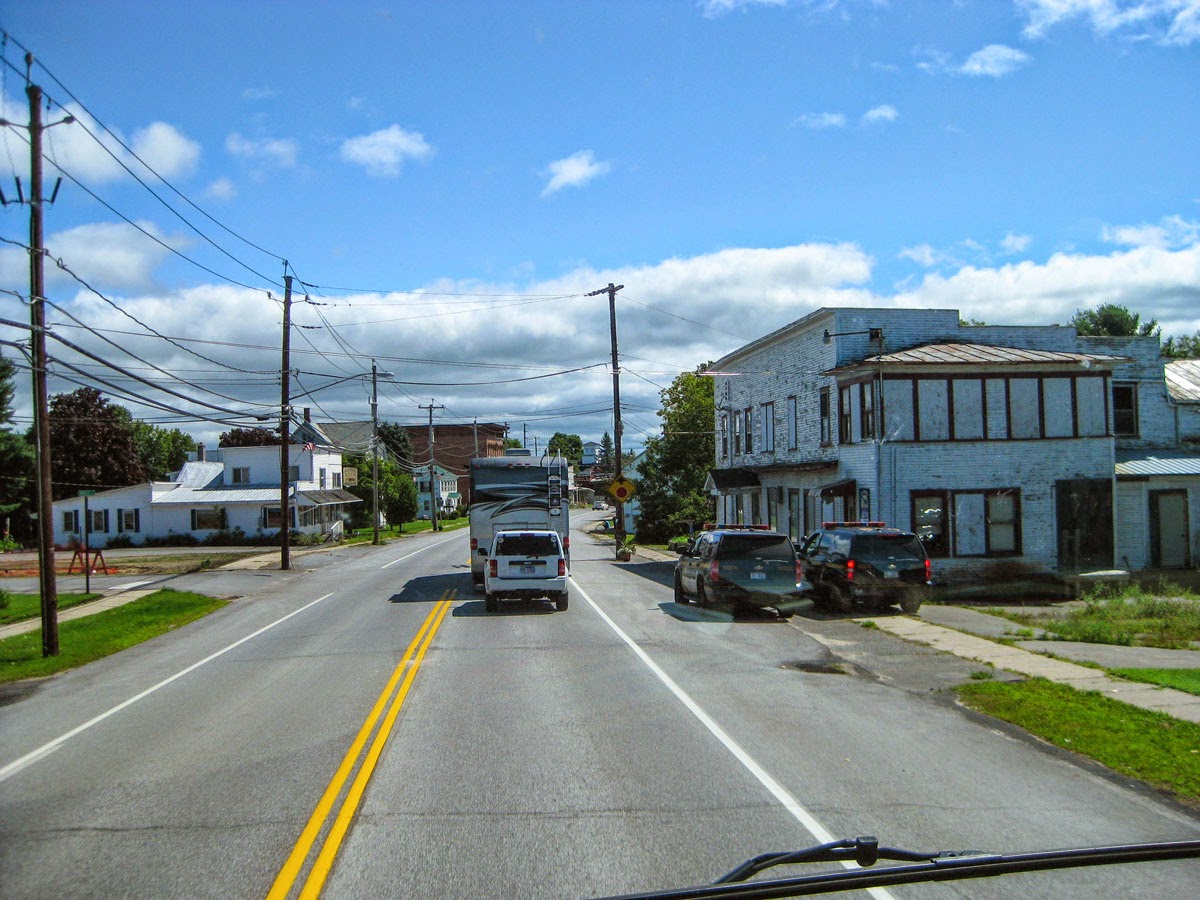 We cross over the top of Lake Champlain on this nice bridge with no side rails to speak of.  Had we turned the other direction, we would be in Canada! 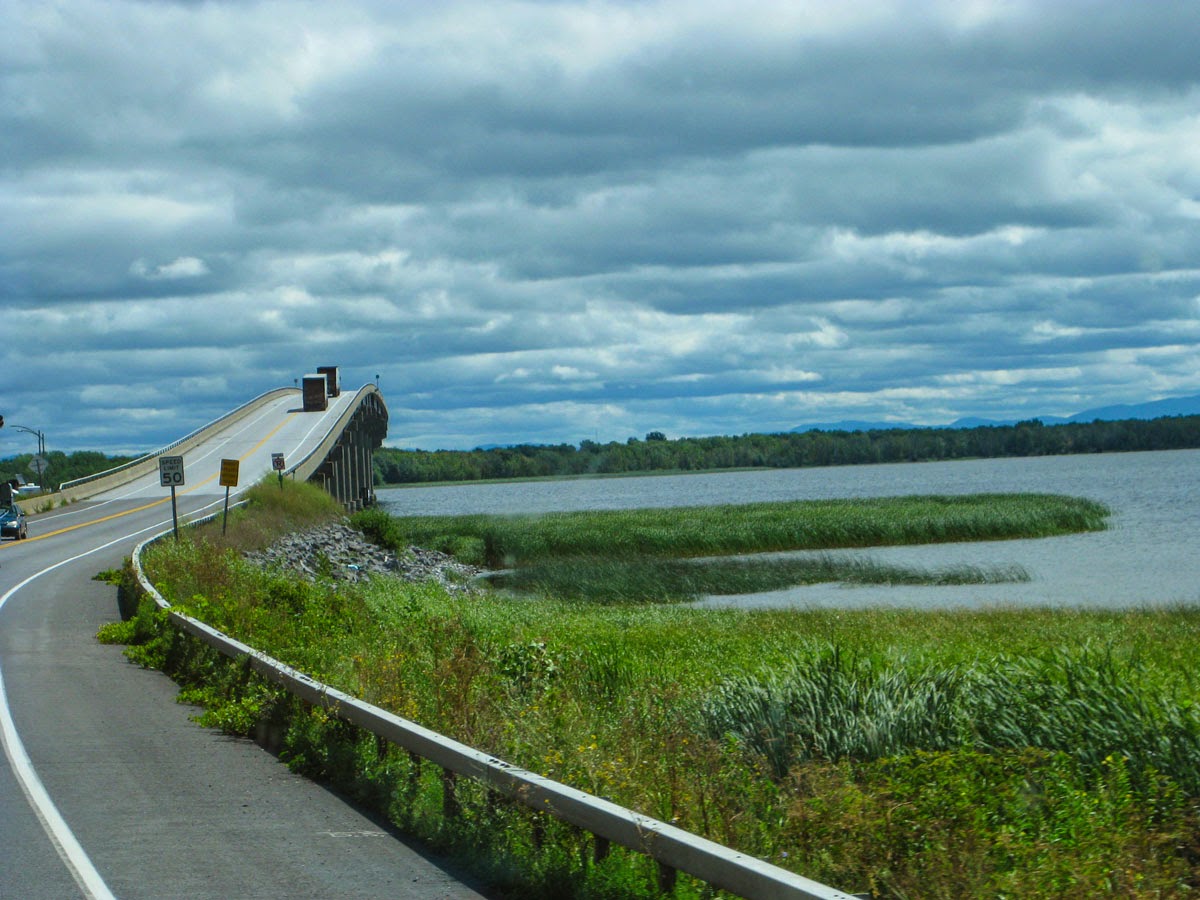 Everything grows beautifully up here, including this huge patch of sunflowers.  With lots of rain and warm sunshine, the lawnmower comes out every weekend!! 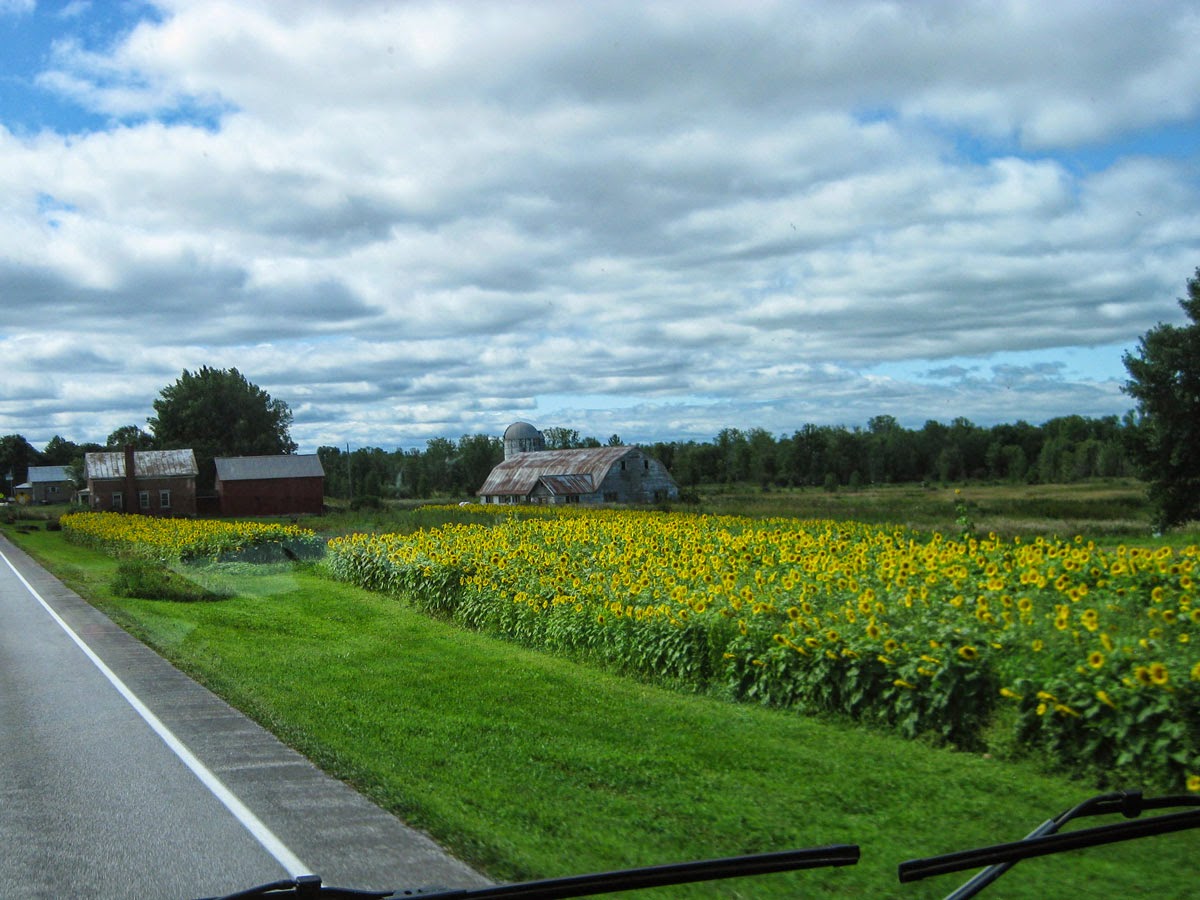 We finally ended up in Burlington Vermont, home of the best maple syrup ever!  We parked at the Burlington Elks Lodge where we each have a 30 amp hookup.  We had lunch at the Skinny Pancake (crepes ... I should have known) and collected this flying monkey geocache from the waterfront, on top of the Burlington Train Station. 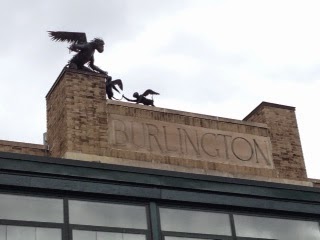 Out front, I was a little confused by this bicycle.  This is a college town, and many people ride bikes, but I'm not sure how far this guy gets!! 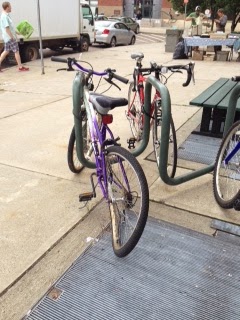 Our second stop in town was to Dakin Farms where we loaded up with syrup, jam and maple cookies.  I didn't know there were different grades of syrup, so Barbara asked the salesgirl to let me sample them.  There IS a big difference in the taste of syrups, from bitter to sweet.   We started out the door when I heard the next lady in line ask for a creamie.  We had seen that name on the waterfront and wondered what is was.  "Really??  Where are YOU from" she asked.  Then she explained that it was soft serve with maple flavoring.  Gotta have THAT!!!  Boy was it was delicious!!  Lots to see here, so we better get busy!!!

Posted by Nancy Kissack at 4:46 AM