The Grand Old Erie Canal is a 363 mile engineering feat that was dug by hand beginning in 1817.  Originally there were 83 locks that raised and lowered boats going from Albany to Buffalo New York.  DeWitt Clinton, Governor in 1817 was instrumental in getting seven million dollars set aside for construction.  That's a pretty crazy high number for way back then!!  They started in the middle so if they ran out of money, it would be more expensive to fill in the hole than to complete the waterway.  Today we took a cruise boat through locks 35 and 36 in Lockport, over the Niagara Escarpment ... the same rock formation that forms Niagara Falls. 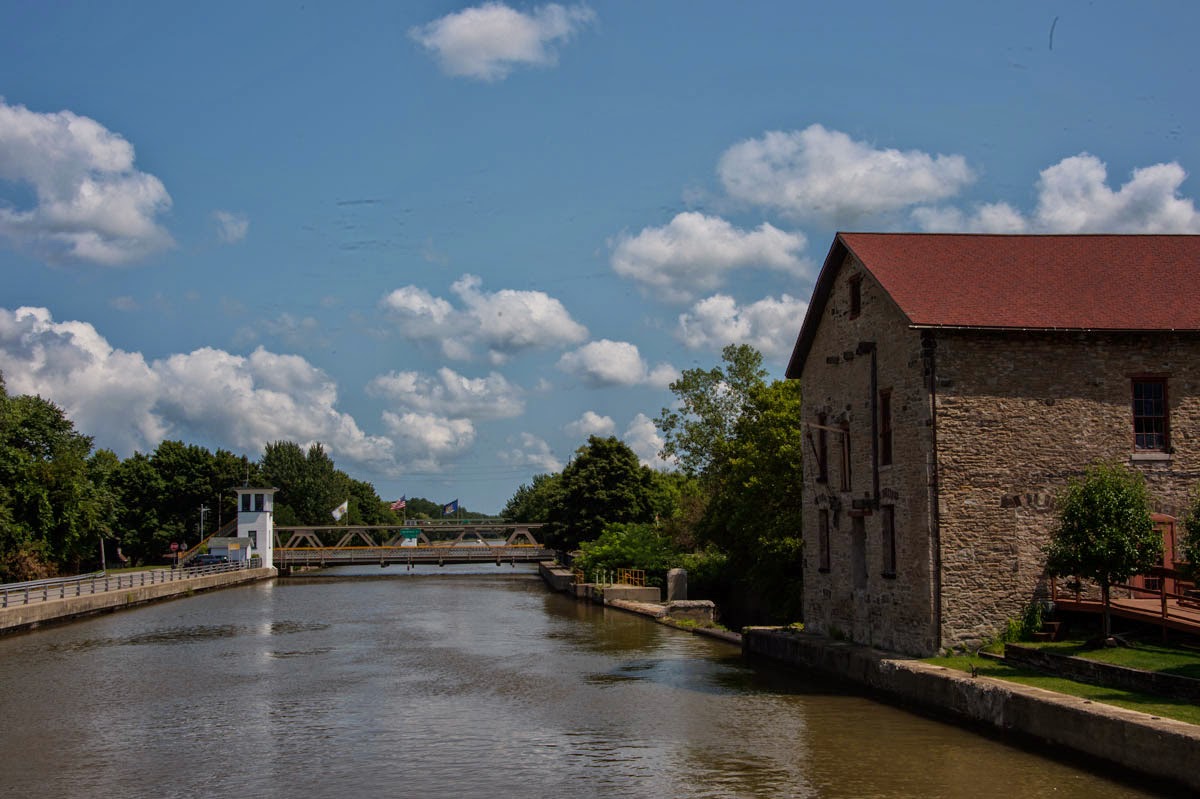 We entered the newer locks on the left, enlarged in the early 1900's ... the five steps on the right are what's left of the old Flight of Five, which you'll see below. 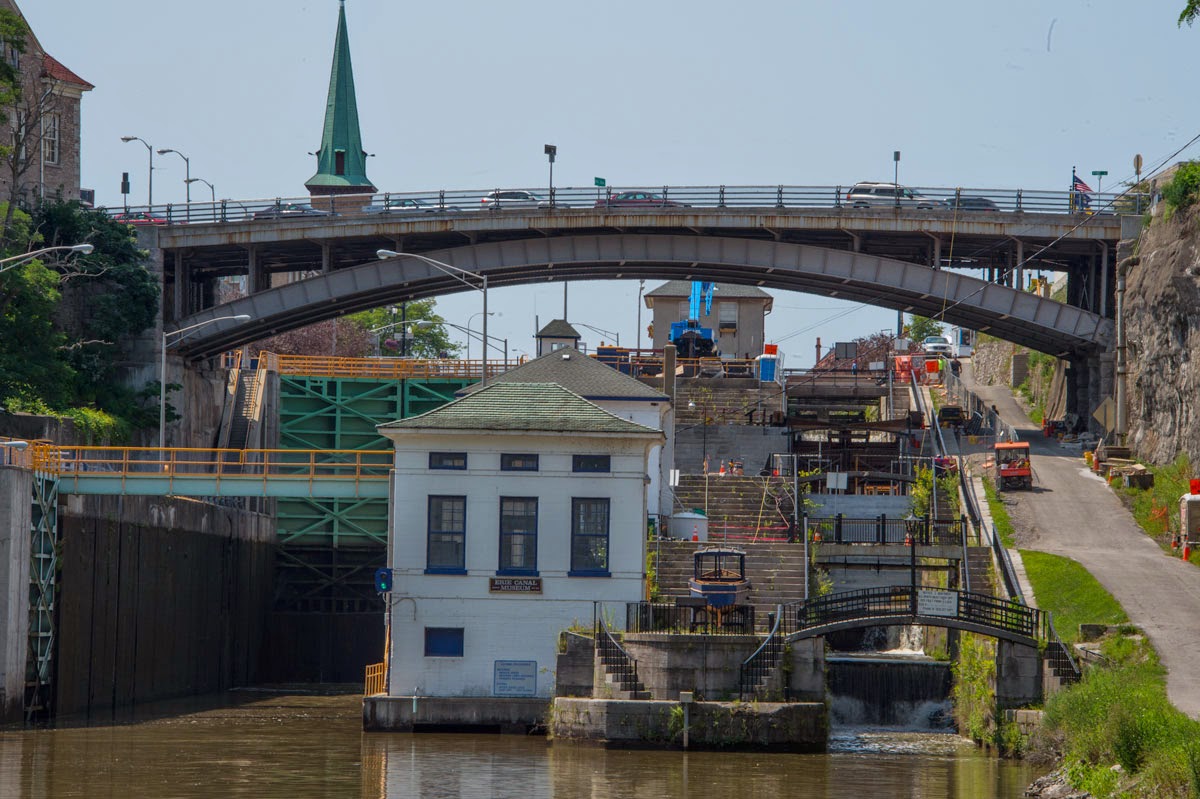 These gates were pretty tall as we entered the first lock for about a 25 foot rise to the second level. 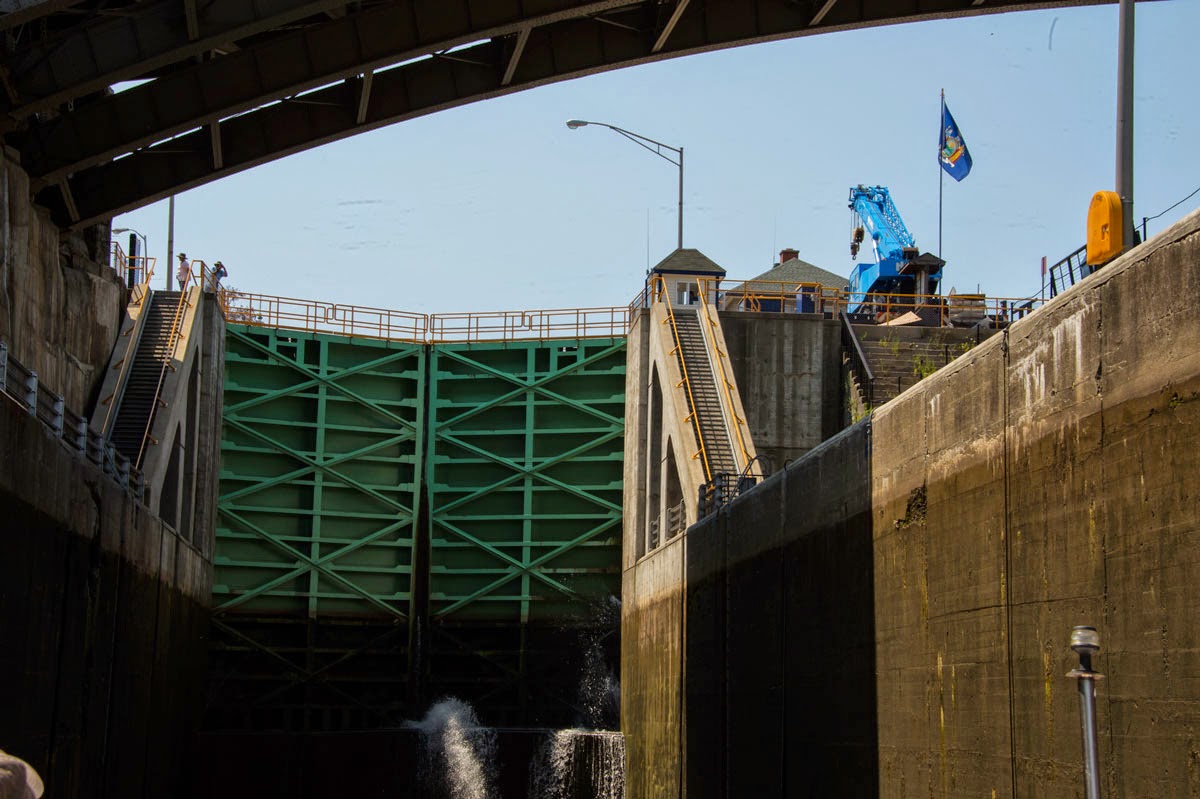 In these small locks, we could definitely hear the scraping sound of the motors opening the valves in the bottom.  You can see the water surging in here, lifting us to the top in record time. 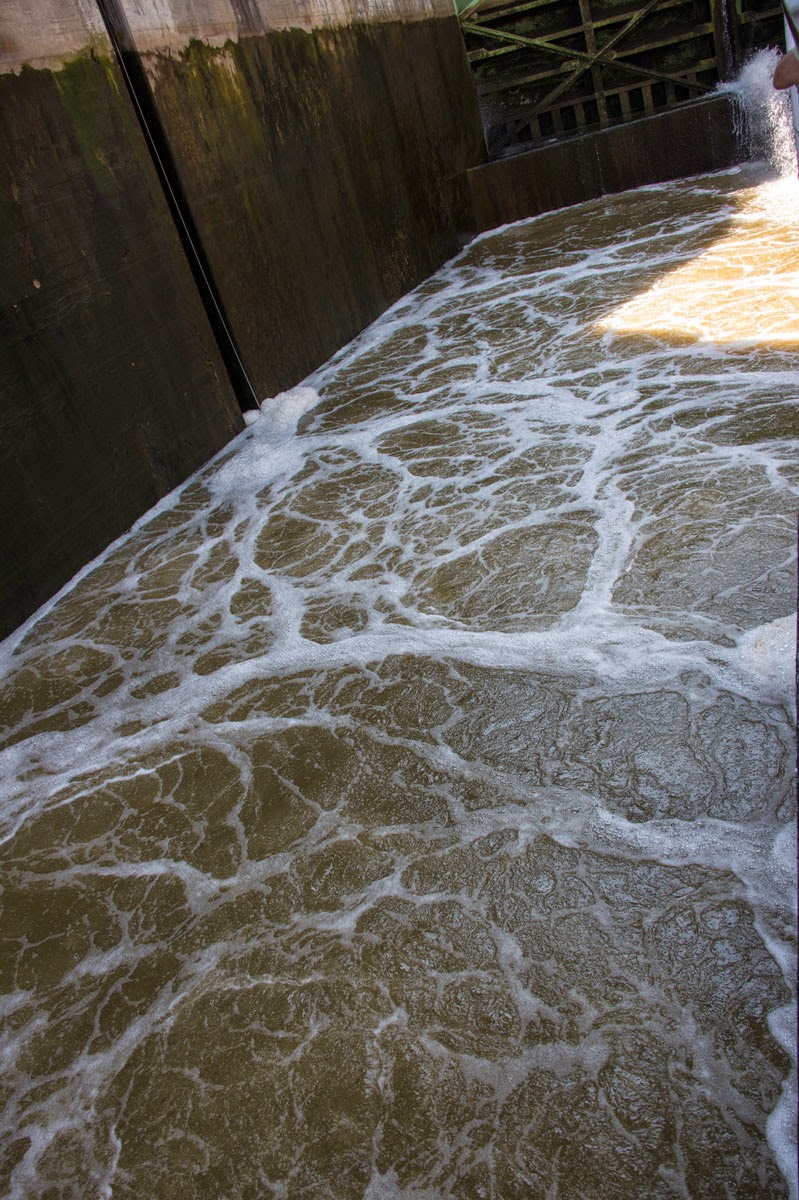 One down, one to go as the gates opened for us to enter the second set of locks.  It's just weird to know we are going through the same locks as people did 100 years ago!! 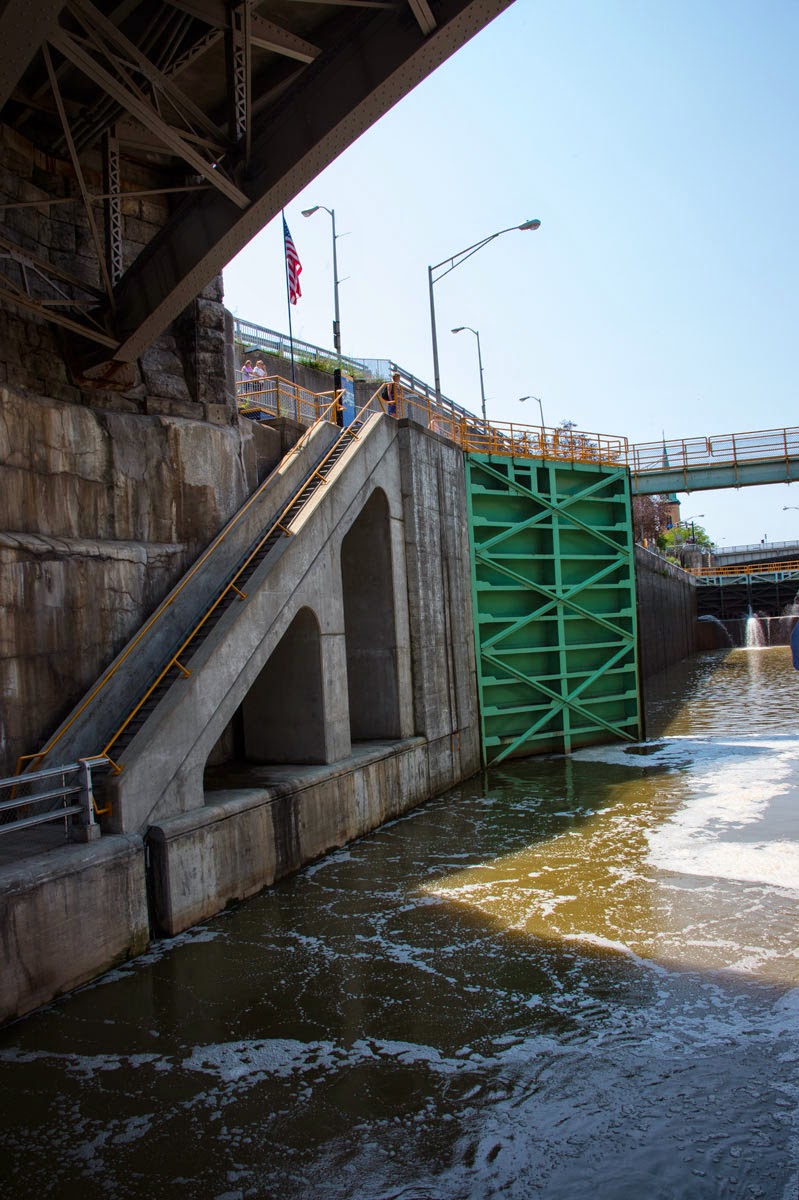 As we finally floated to the top, the first set of gates opened to reveal a second set, put in place to keep upriver boats from hitting the gates, making for a dramatic waterfall and crash 50 feet to the bottom.  Keep an eye on the buildings here ... you will see them in an old picture below. 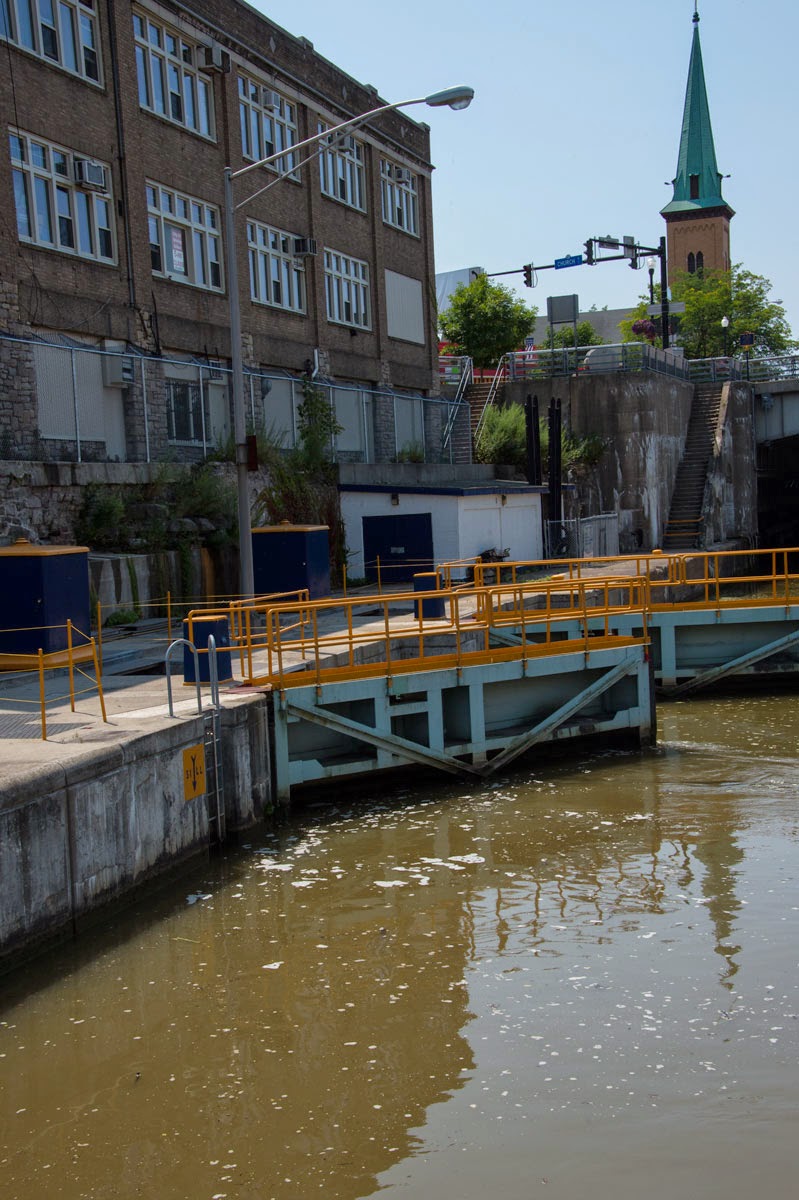 We cruised under the widest bridge in the U.S. and up the canal as we learned this was built by mostly Irish people who came here specifically for this project, resulting in more people entering the U.S. through the Erie Canal than came through Ellis Island.  Amazing craftsmen they were, but you can see the wear and tear of well over 100 years. 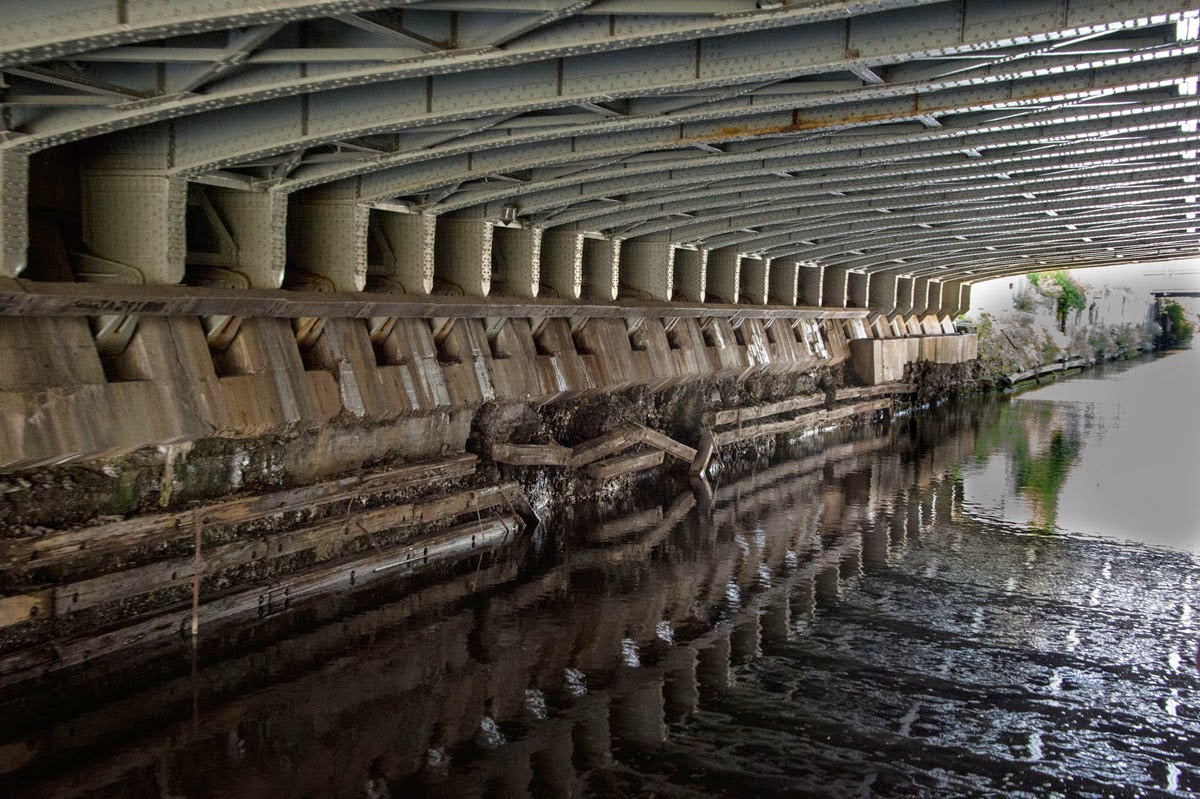 The roads alongside the canal are barely visible, where mules and horses pulled boats and barges the entire length of the canal.  Being only 4 feet deep, the barges were loaded to the brim and bounced along the shallow bottom.  Stairs were placed at intervals so when a team fell in, kids would jump in, grab the reins and ride them out the steps.  These kids jumped in from the same area, but unfortunately there weren't any stairs and they had a hard time getting out!! 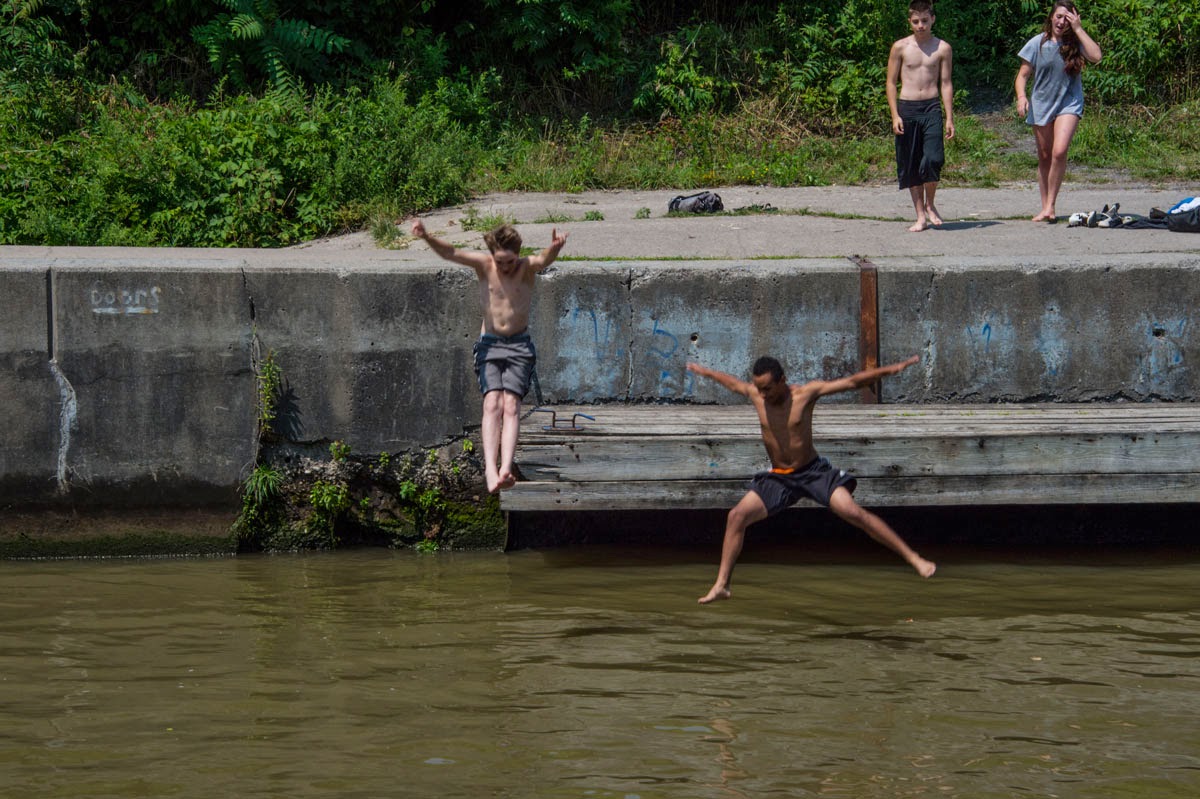 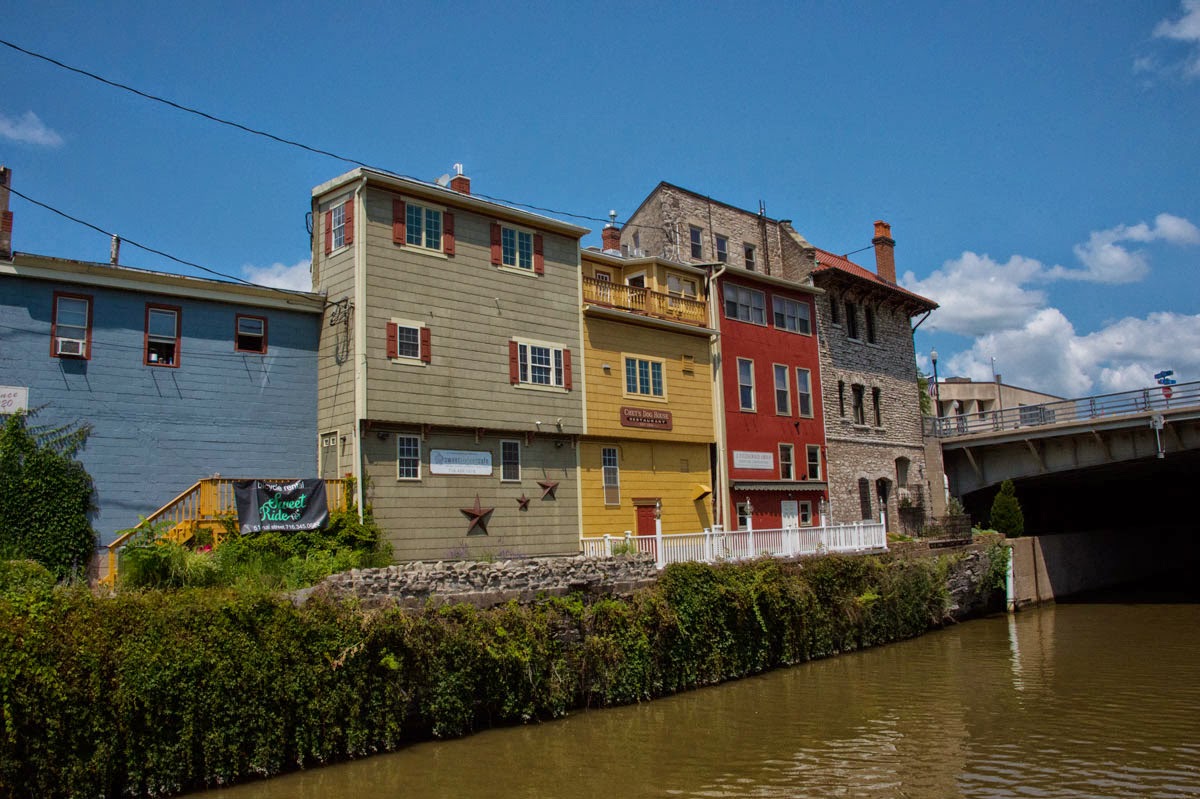 Going up the river was one thing, but coming back down was a little different.  We pulled into lock 35 and looked 50 feet down to the river below. 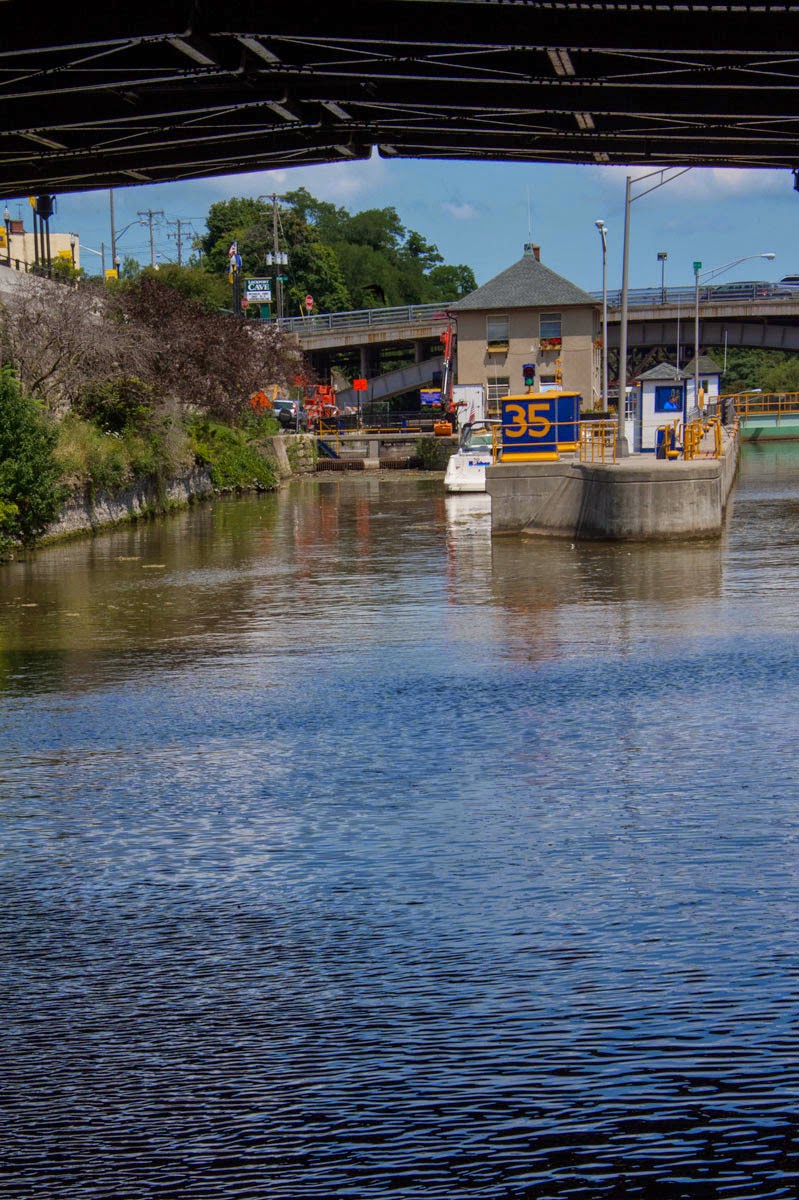 As the water started to swirl, it was drained into the lock below us, as we waved to the crowd!!  Mostly a little girl who got terribly excited when we waved back!! 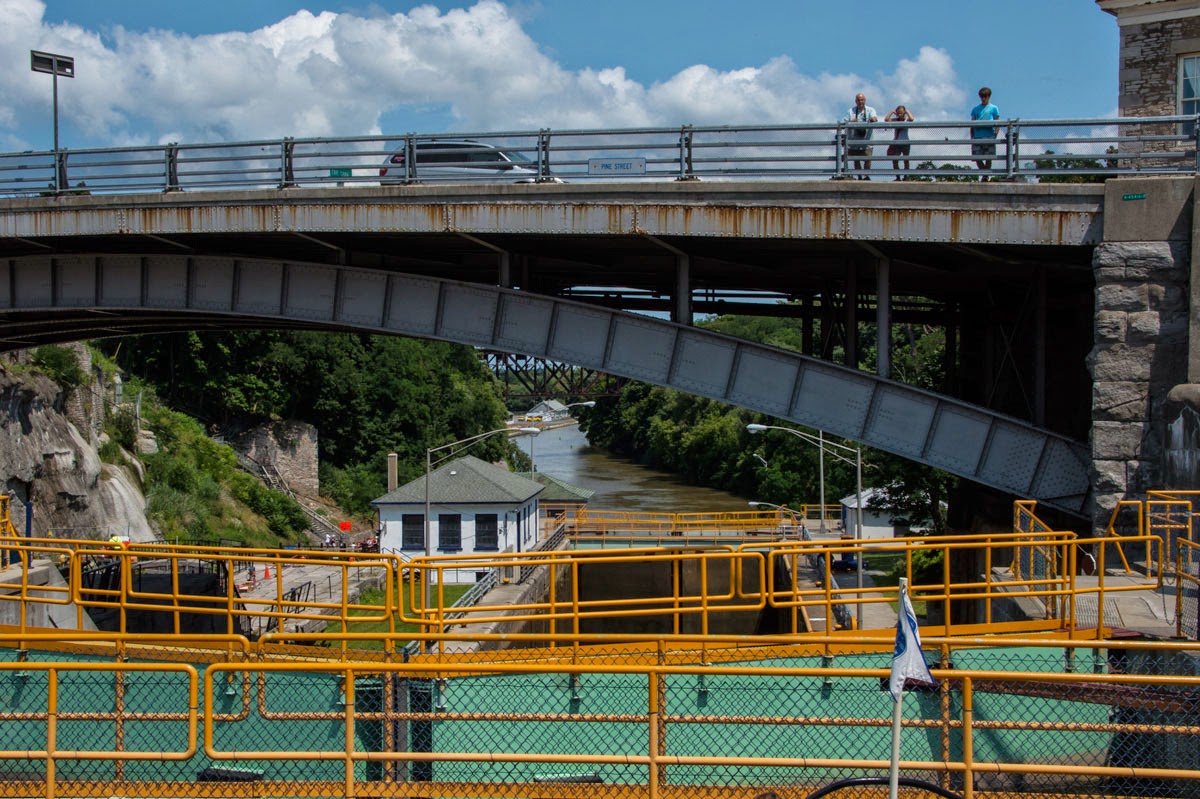 One down and one to go.  This gives you a good idea of how far we dropped, which happened in a matter of minutes!! 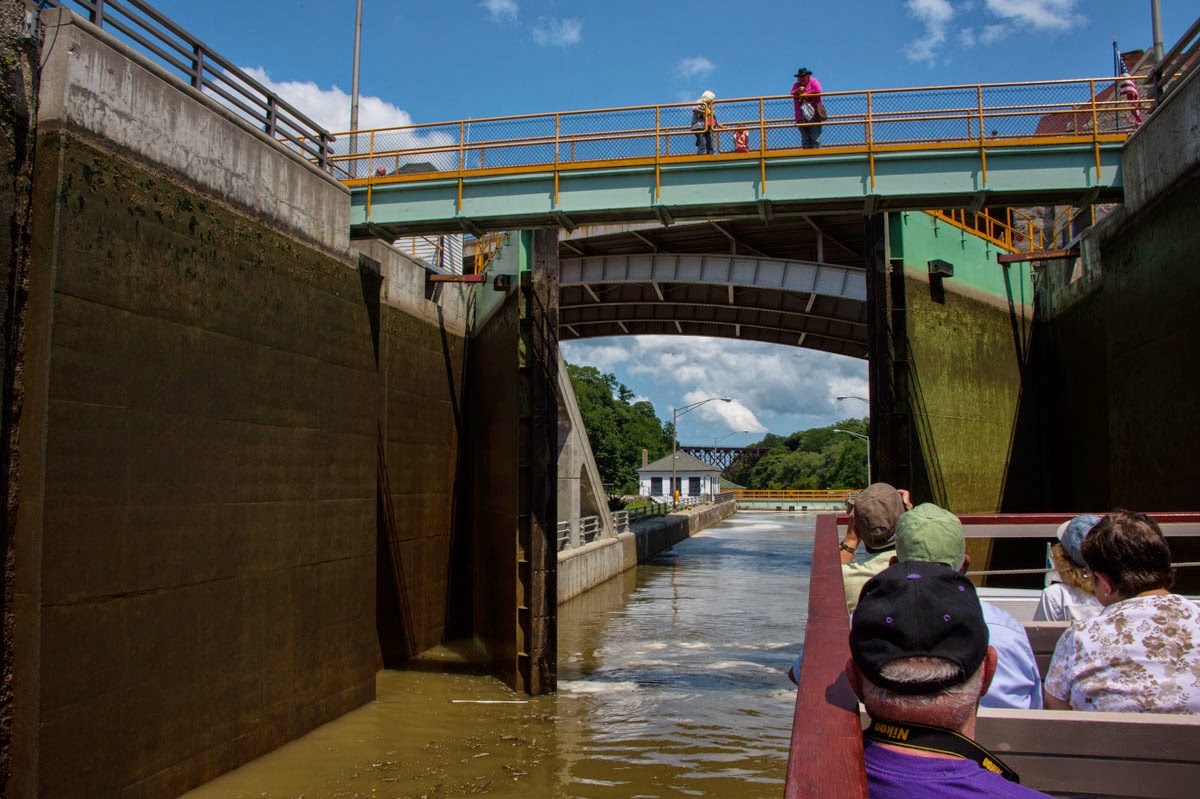 As we cruised down, two bridges had to raise up for us ... well one actually.  One is in such disrepair they just leave it up.  The other one still raises after all these years and the Gatemaster came to the bridge to wave as we sailed by!!  This church and house were built with free-brick ... when the canal was completed, all the leftovers were free for the taking. 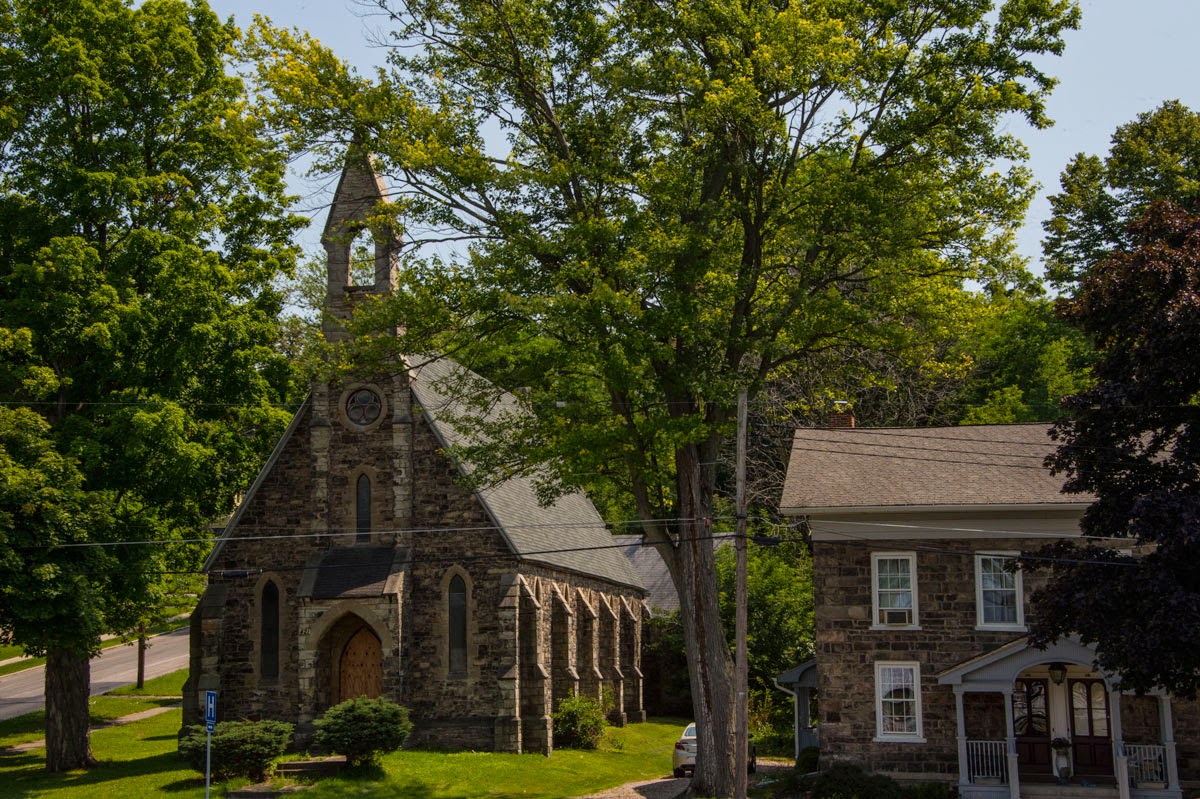 This is a family run operation and they just purchased this old rock building next door.  It was originally used to store ice gathered from the lakes in the winter.  They filled the basement and first floor, which would be used to keep products cold in the summertime.  The ice lasted all summer long.  They are currently making it into an Erie Canal Museum. 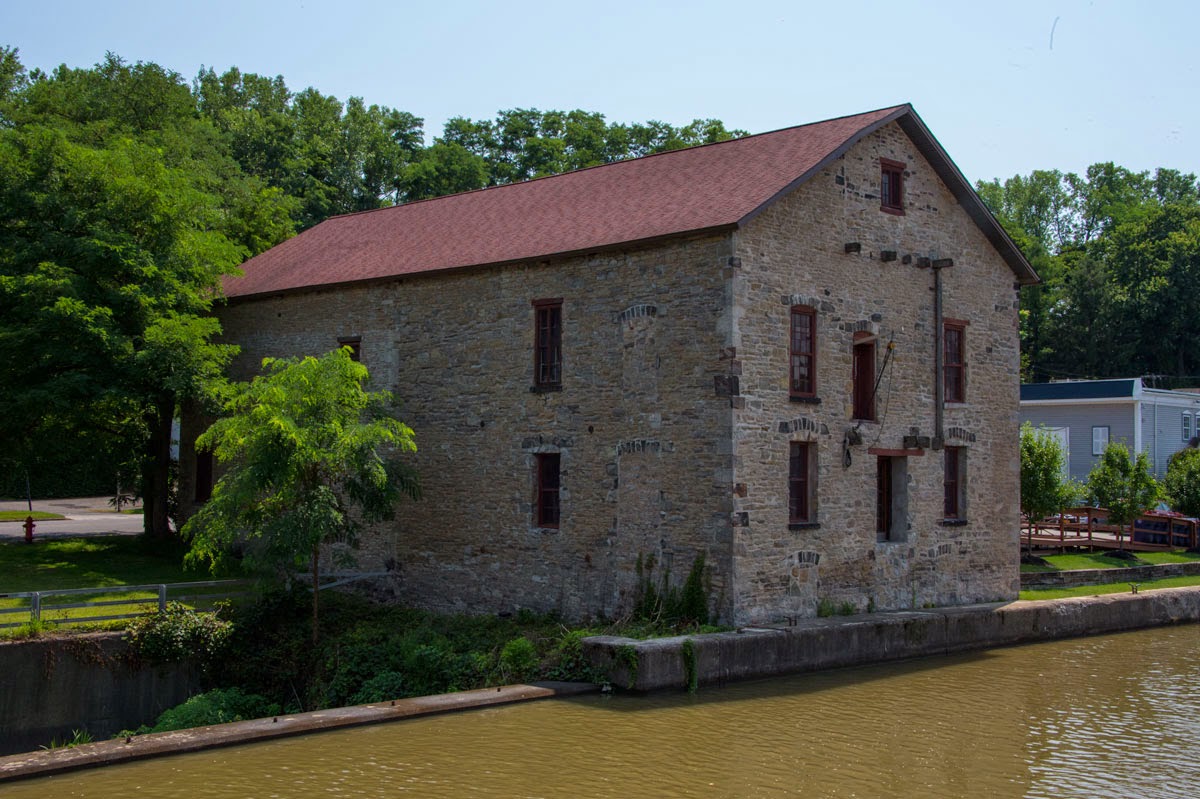 From two to three tourists a day to over fifty per cruise, they have grown with the help of a news crew that put the spotlight on them, requiring them to buy bigger boats to handle the loads.  They recently purchased and sailed this paddlewheel from the Thousand Islands all the way through the canal to it's new home here in Lockport. 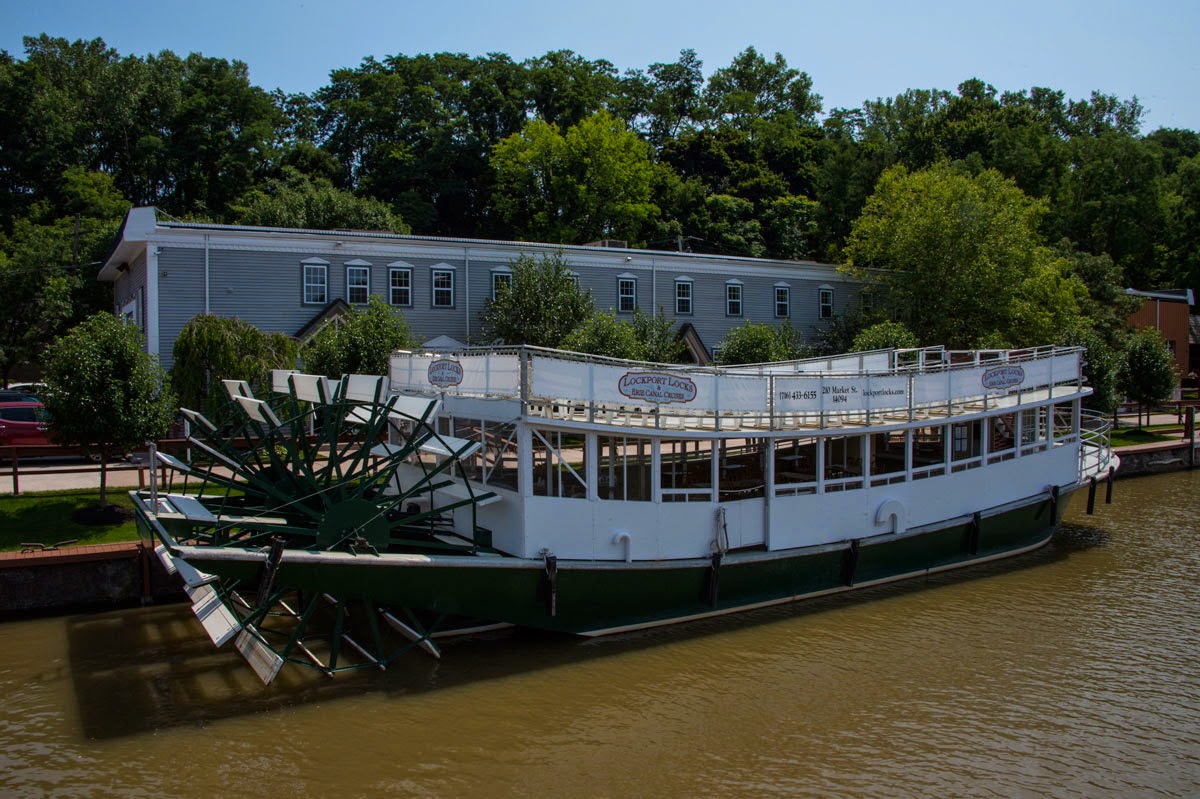 Heres the view from the bridge above the locks. 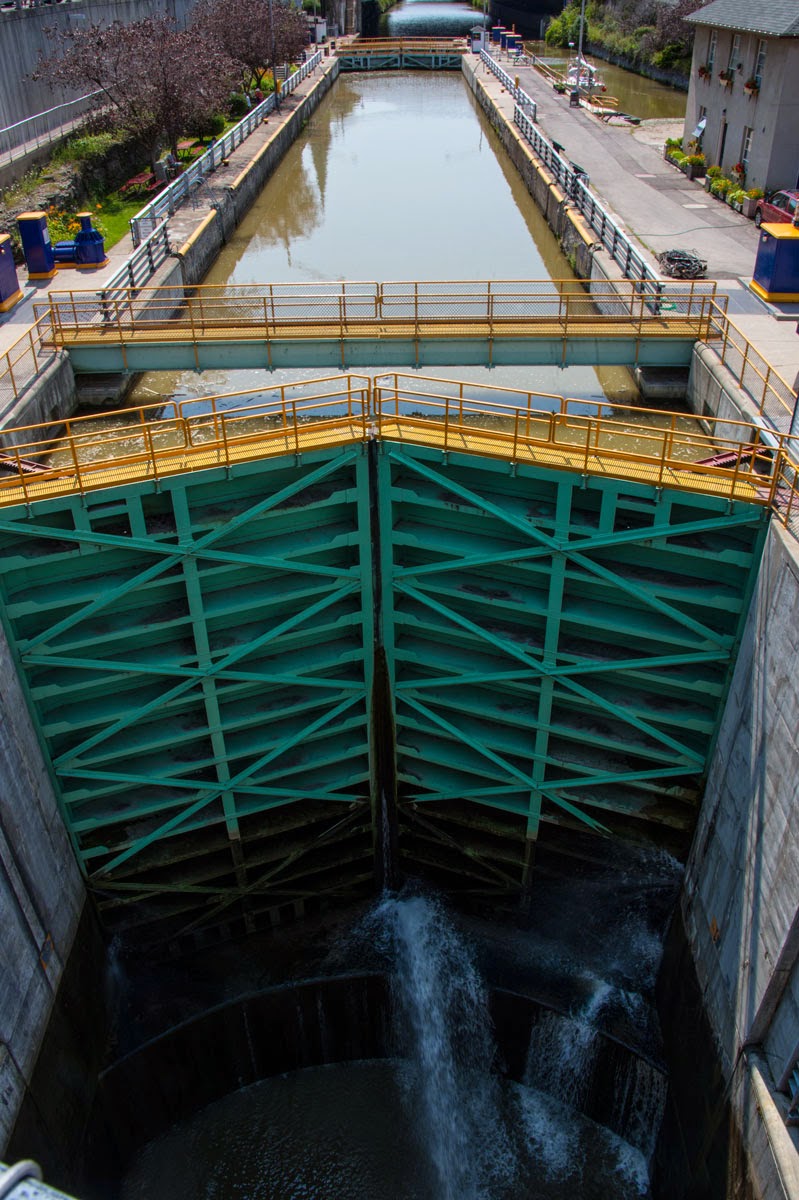 And a view of the top of the second lock. 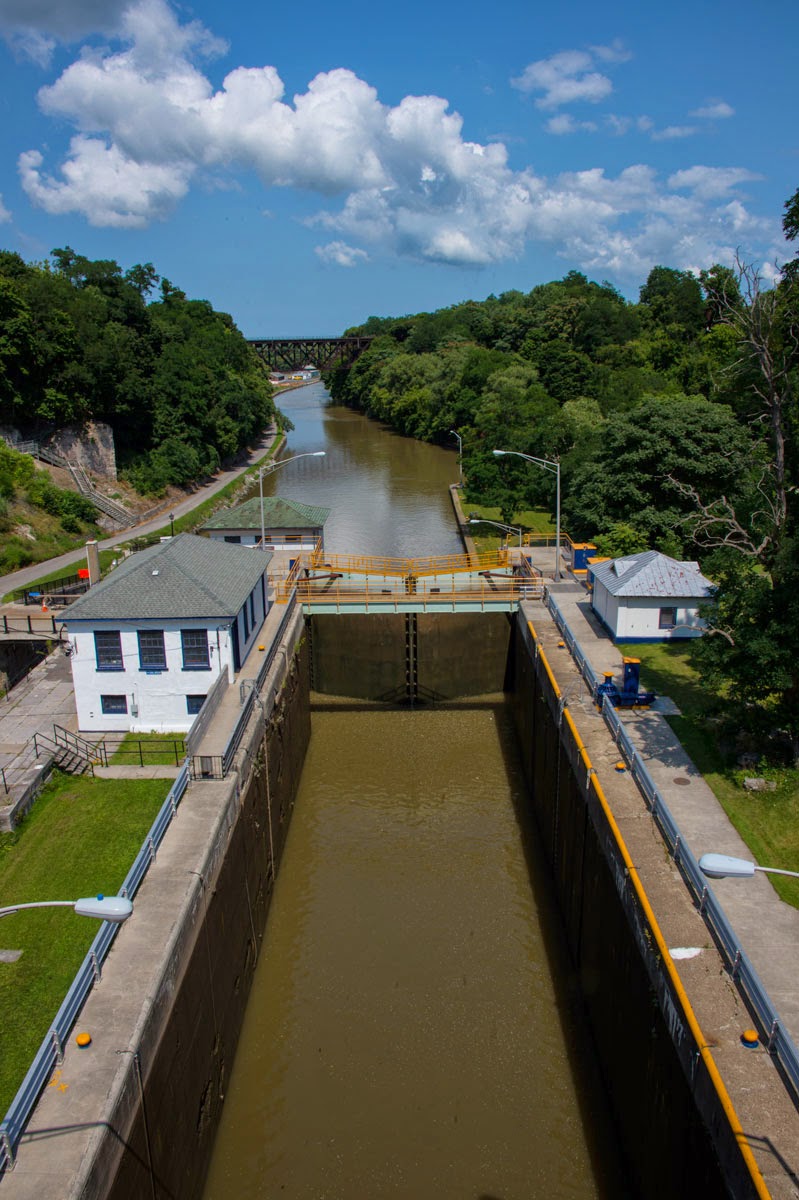 Looking down the canal, this is the original five locks at this site.  These were used for going UP the river.  To the right were another five locks for boats going DOWN the river.  The second Flight of Five were removed in order to build the large lock above. 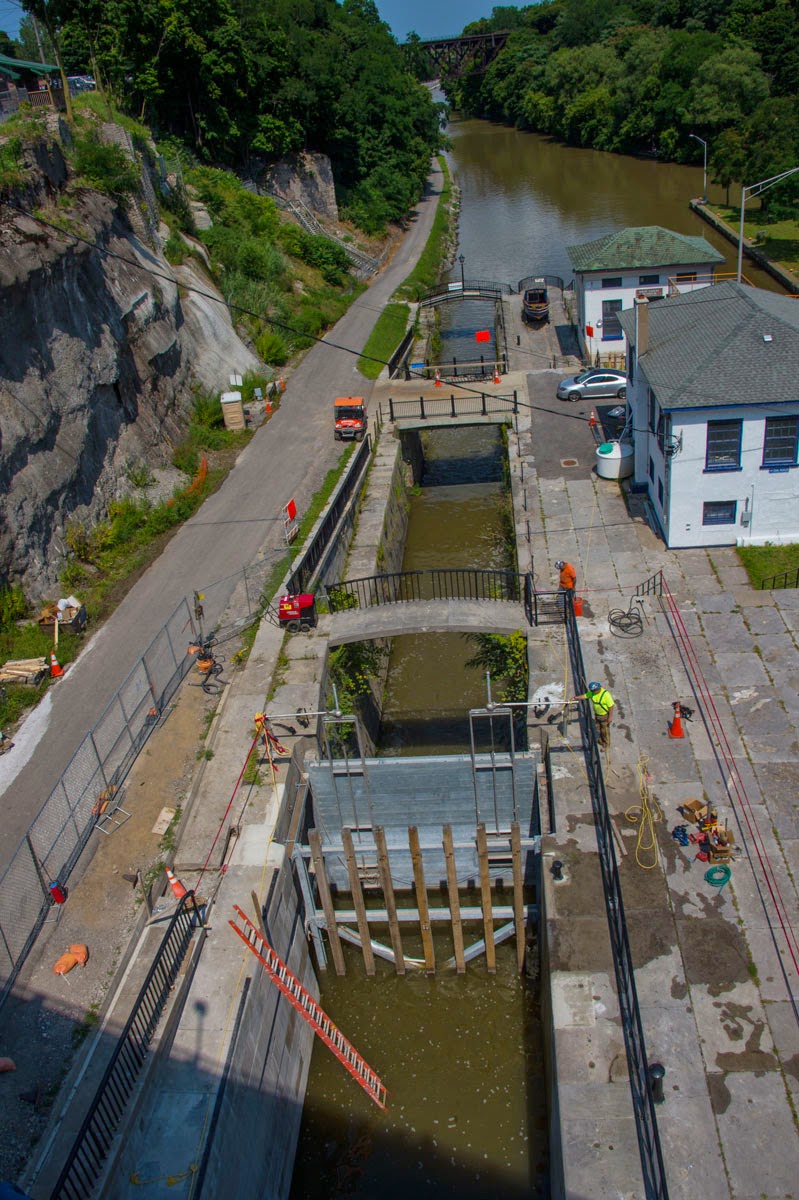 As you can see from this old image in 1939, the five locks on the right look exactly the same.  In 1817, barges were small and the entire canal only 40 feet wide.  By the time the Erie Canal was completed, it was time to enlarge it since barges were being built wider. 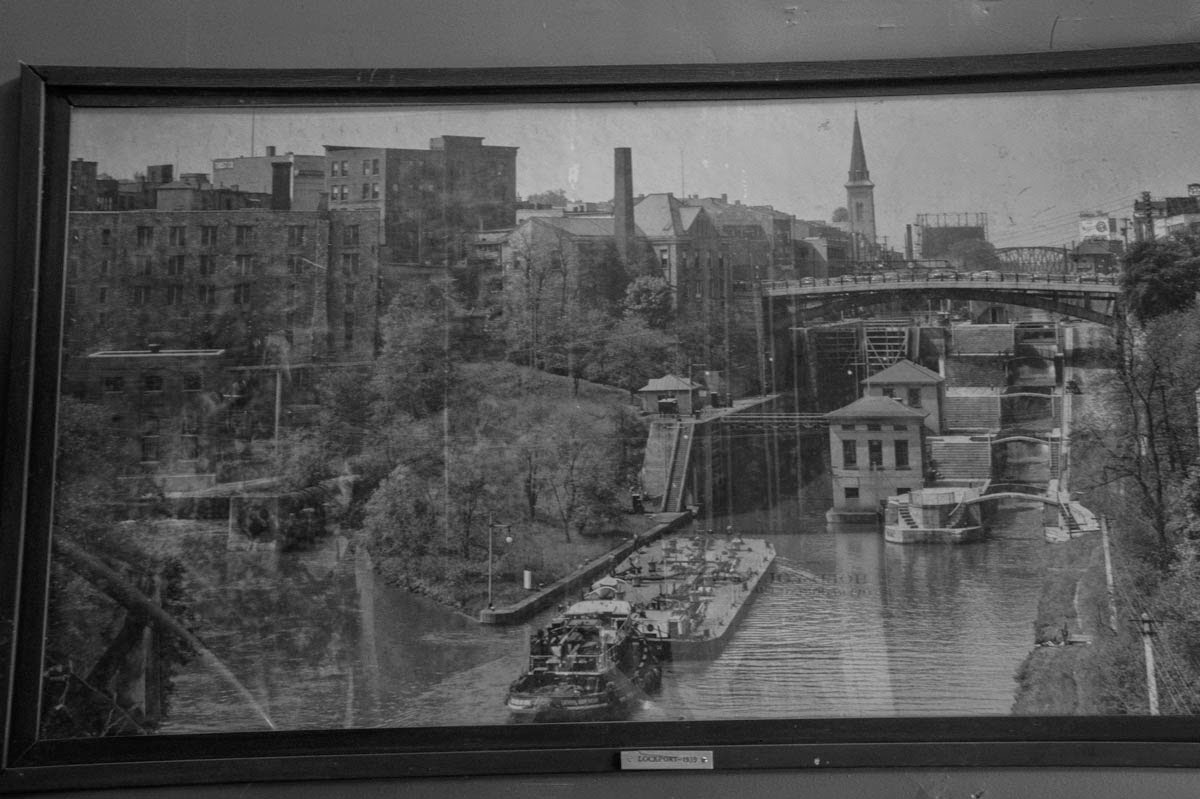 Here's the same view from today.  They are doing some renovations on the small locks and mule road on the right.  Many portions of the original locks no longer exist, or are now on private property.  It's good to see them keep this section intact.  The last commercial barges went through in 1994, but small boats still run the Erie Canal from New York to the Great Lakes.

For dinner, we went to the famous Anchor Bar in Buffalo, except I didn't know what it was famous for!  I found out it was Barbara's favorite buffalo wings!!  It's where they originated ... and boy were they yummy!!!  At 3:30 the place was packed! 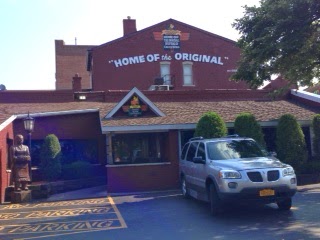 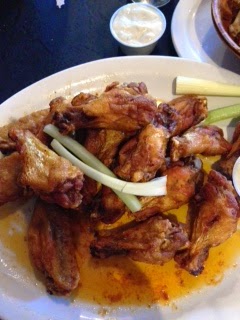 Back in the Niagara Hartland RV Park, the neighbor's 75 pound dog got loose and attacked Cooper and Jessie ... who are just fine.  Jessie can definitely hold her own as she fought him off until I could snatch Cooper up off the ground.  Thank goodness the neighbors were home and came running over to grab him, apologizing profusely!!  No harm was done, except I'm pretty sure their dog has a few new holes in his nose!!!   Today ..... Niagara Falls!!!

Posted by Nancy Kissack at 4:05 AM