We're somewhere, but exactly where that is, is a mystery to me!!  We talked about Boston and DC, then Gettysburg, and when we left yesterday morning, I knew we were going to Ludlow.  What I didn't know, was what state it was in!!  My GPS finally set me straight!

No matter, we are off on a gorgeous day!!  To make it better, it's supposed to cool off!! 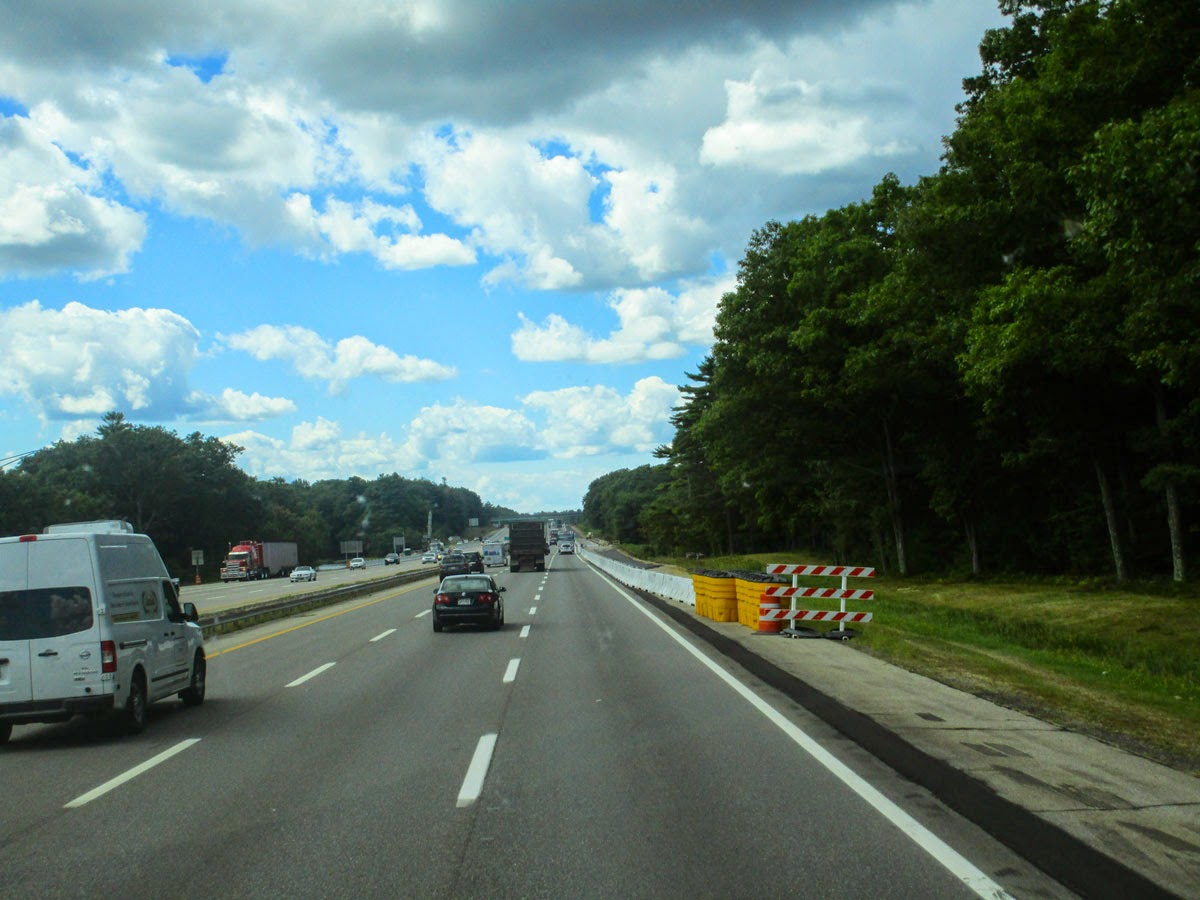 As we headed South, we got on another toll road ... they are everywhere out here and they cost a pretty penny for big rigs!!  I think today ran over $26.00.  Oh I have the receipts this time, in a big pile on the floor, right where I dropped the tickets and change before catching up to the Westerfields.  I  got on the radio and asked Barbara what the last one cost them so I'd be ready, and I'm SURE she said $75.00!!!  Geeze louise .... I hope they take credit cards.  Turns out it was only $2.75 and I missed the "2". 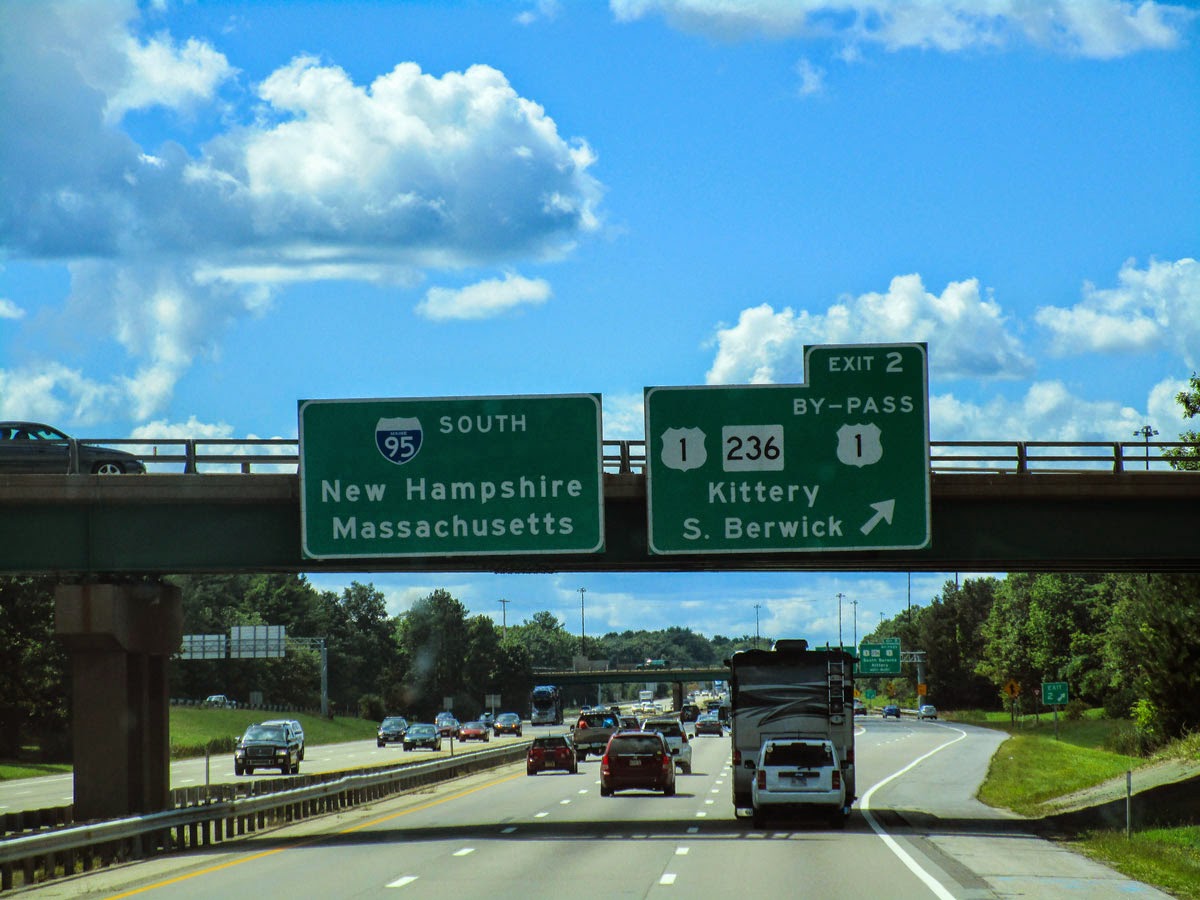 At least I know we're going to New Hampshire or Massachusetts.   When we came to this bridge that looked WAY too low for us, I just kept snapping pictures so I wouldn't see what I hit!!   I tried to follow on my GPS so I knew where this was, but when you're watching three lanes of cars and trucks zooming around you, you don't pay too much attention to road signs. 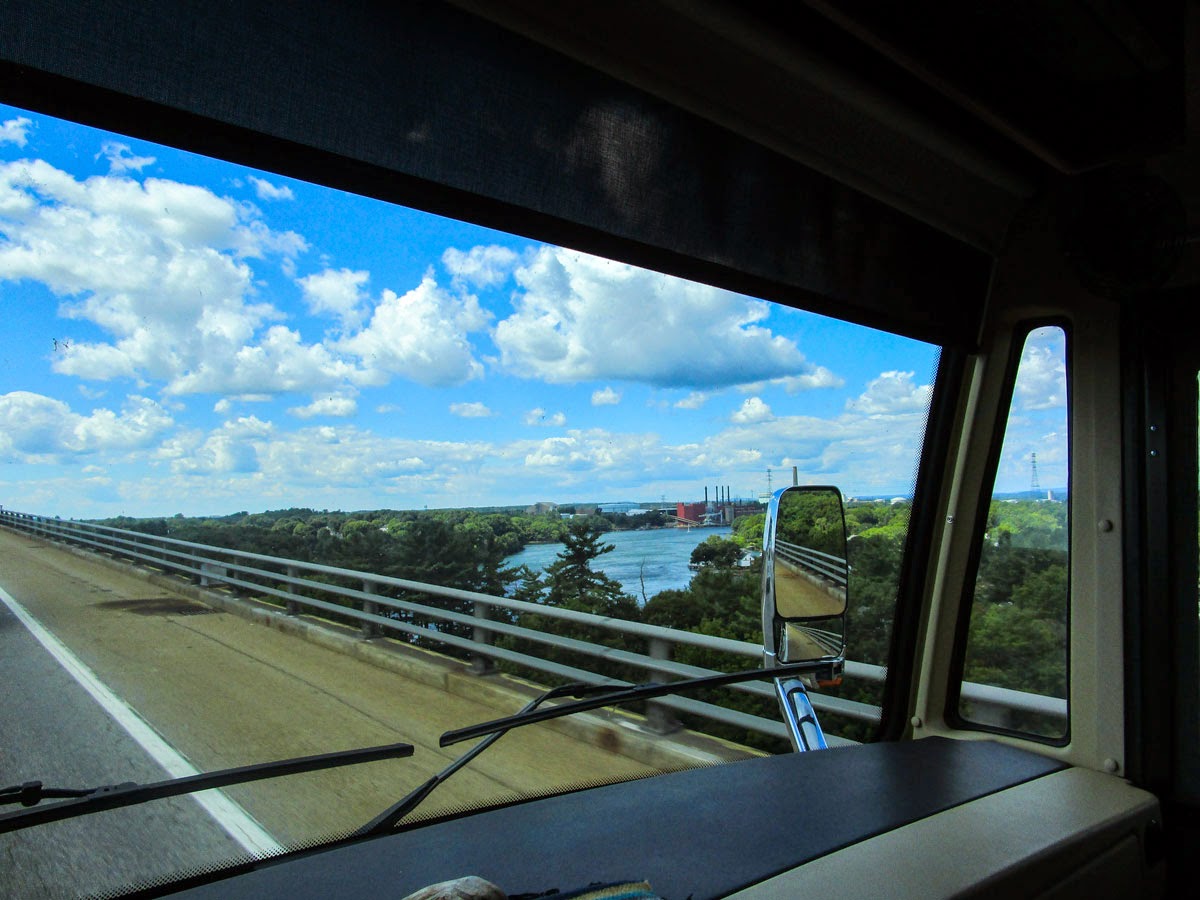 Yikes ... are you SURE we're going to make it??  We did, but I couldn't get any better pictures with both hands having a death grip on the steering wheel!! 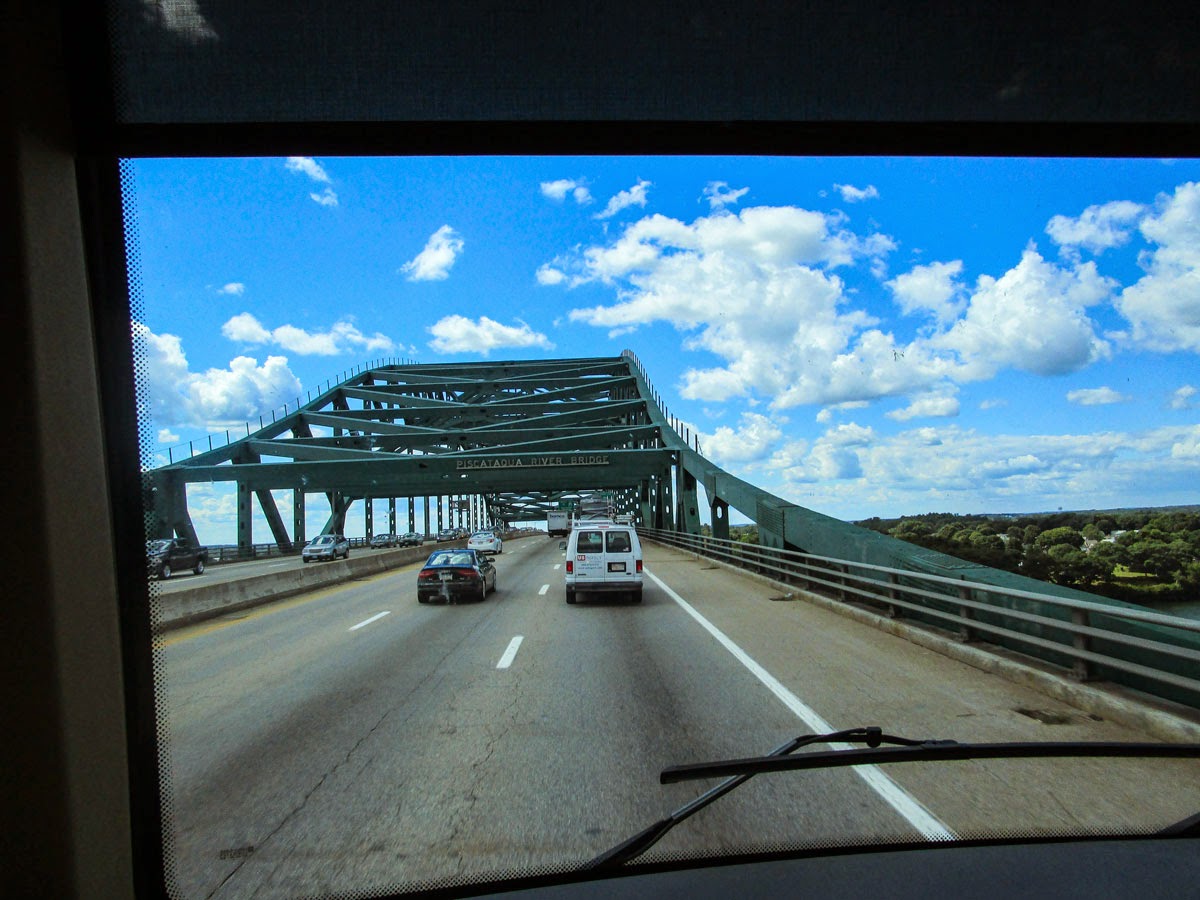 I'm pretty sure this is where we passed the State line into New Hampshire, as there were many signs advertising NH Lottery Tickets Here, on the overhead signs and the off ramp!!  This is also a State liquor store, which probably accounts for the full parking lot!! 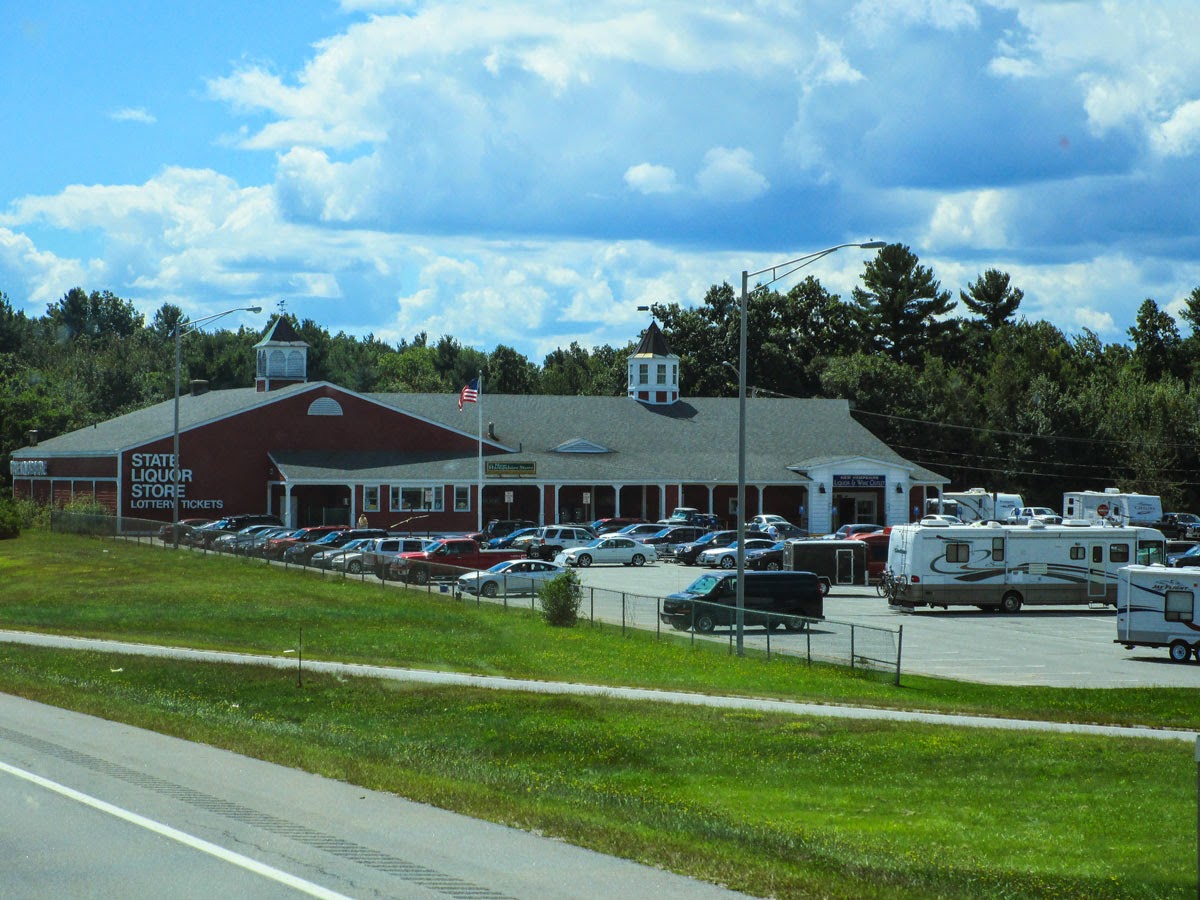 I did catch the sign when we crossed into Massachusetts AND the toll booth for $10.50.  I have to admit the roads were smooth and shiny, making all the traffic a little easier to handle.   When Barbara called on the radio and said we had a choice of Hwy 1 with two accidents or Hwy 2 with only one accident, we took on number two ... only to find it in terrible shape!! 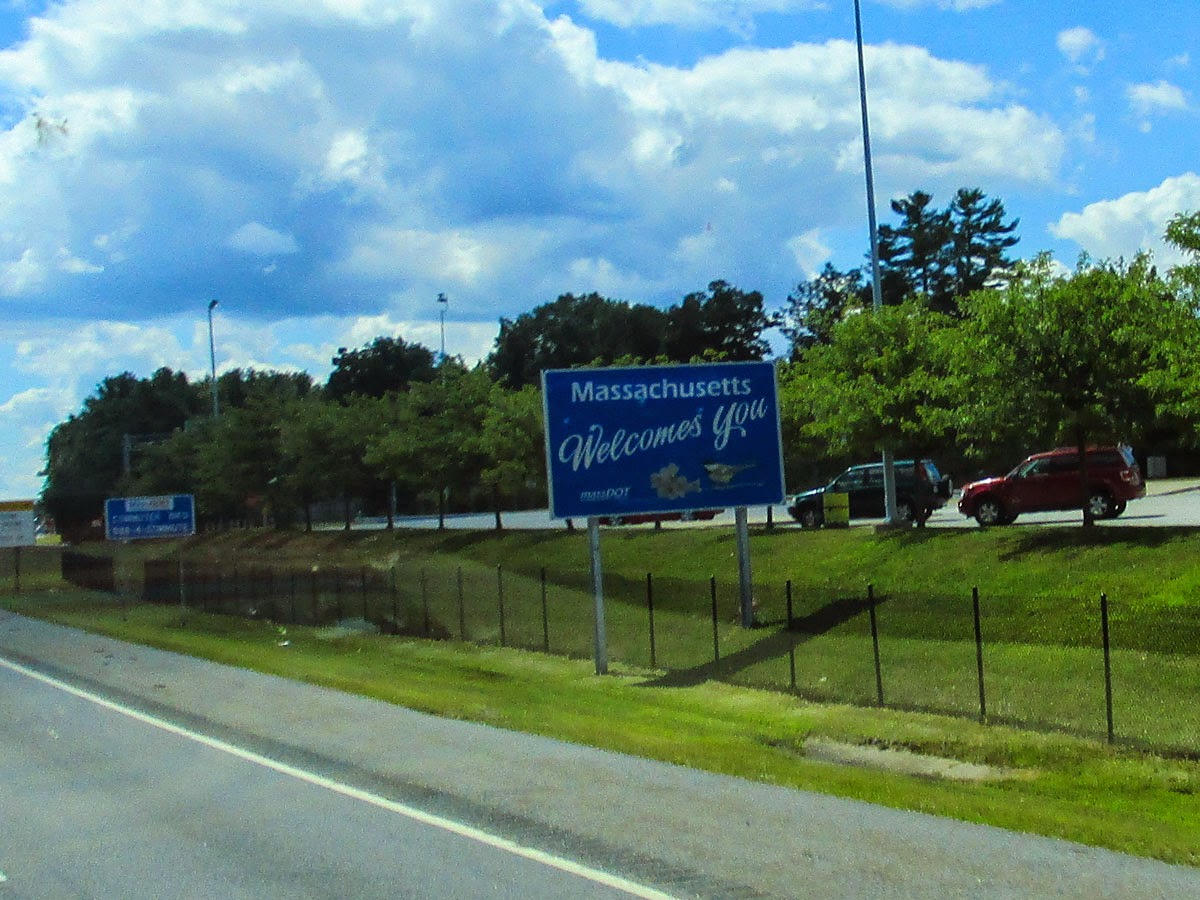 At least we aren't going the opposite direction!!  I thought this was a fire, but come to find out, it's just the road construction.   The drivers here just do the craziest things!  One car in front of Tom slammed on his brakes and turned right (the wrong way) on to a freeway ON ramp.  Guess he missed his offramp! 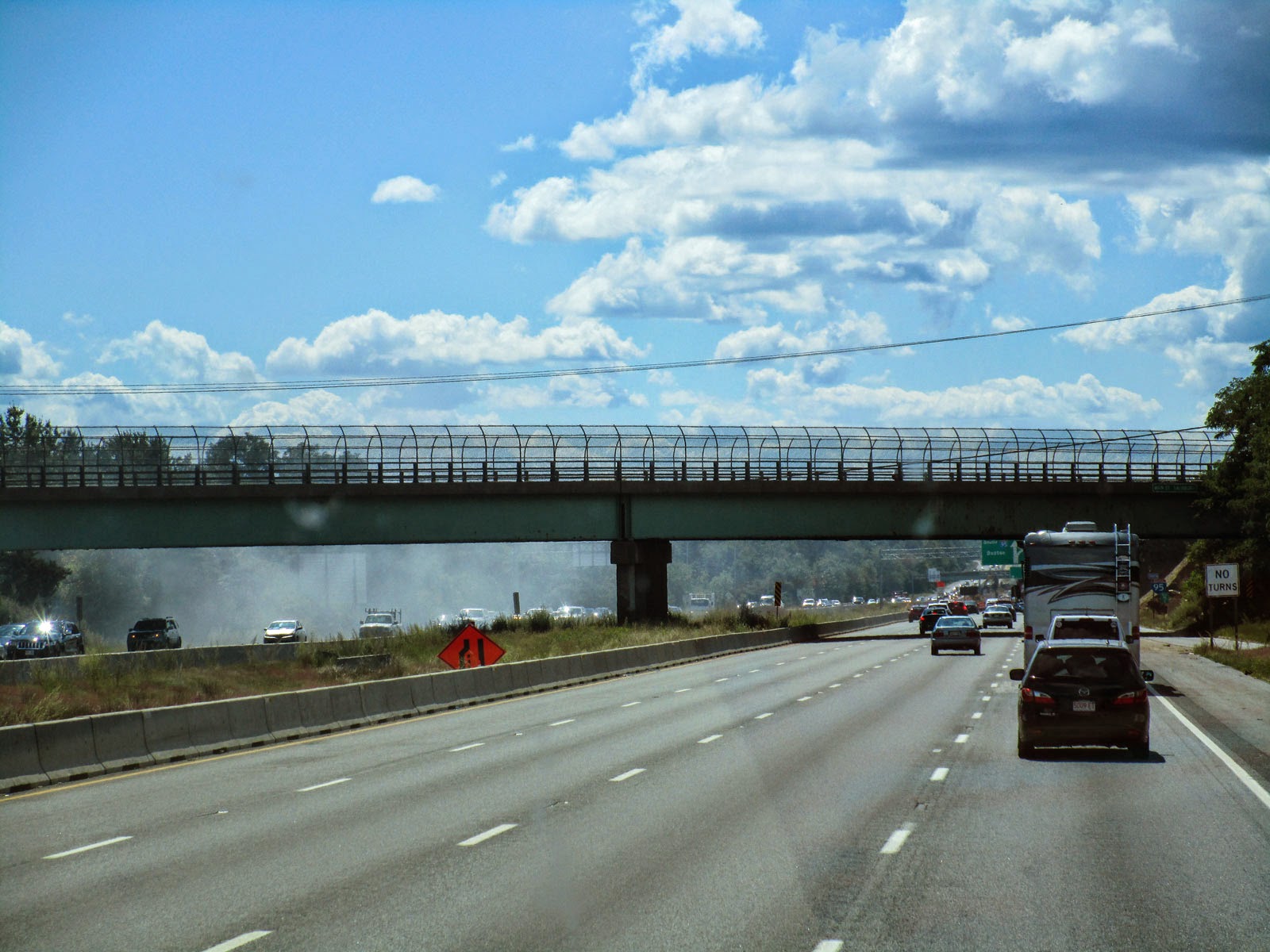 Traffic was still terrible after almost three hours and we didn't even come close to Boston.  Trucks aren't allowed in the left lane at all, so they practically touch your toad bumper to get you to move over.  If we stayed in the right hand lane, we had to deal with all the drivers that didn't know where the gas pedal was ... literally stopping in front of you instead of speeding up! 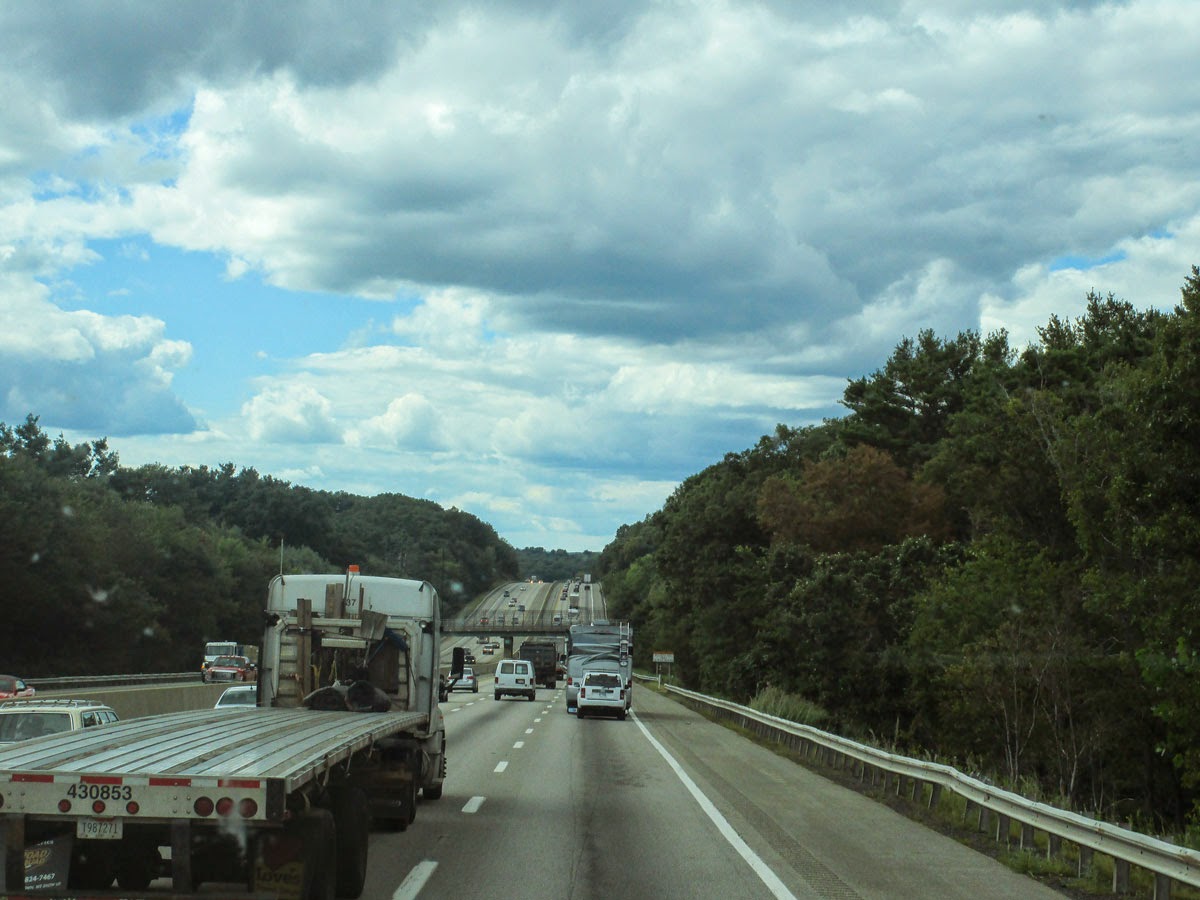 By now the actual road surface is a little better, but the bridges were atrocious!!  Enough so that the bouncing of my rig bounced my little ceramic frog right off his wall attachment, sending him crashing to the floor, along with just about everything else not nailed down in my rig!!  A quick stop at a roadside rest area to gather up the mess, and we were off again, with a promise of only 30 more minutes of driving. 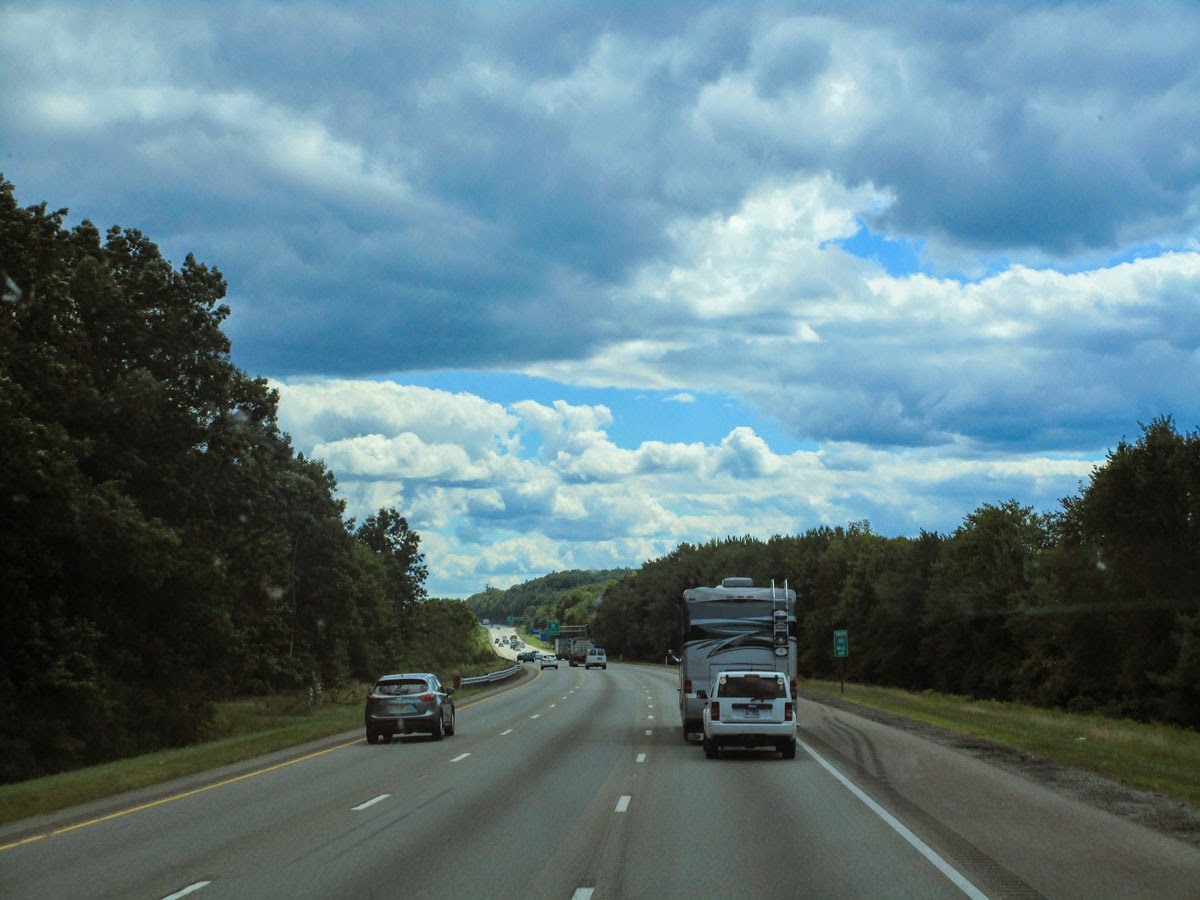 At last we ended up on a two lane freeway, with not as many cars to navigate around.  One last toll booth and we cruised into Walmart just west of Ludlow Massachusetts.  Another container of Def fluid and some super glue was all I needed.  Barbara had read about the midnight frisbee games in the Walmart parking lot due to plenty of light standards for visibility, but I really didn't think they would be here on a Thursday night.  We confirmed it with the Security Guard, but I doubt they will be here on a Thursday, right??  Sure enough, at the appointed hour, about 15 college kids showed up for a couple hours of entertainment.  I watched them for awhile ... it almost looked like they were practicing for a competition!!  The truck parked next door unloaded all of the cars he was hauling and the homeless guy on the other side crawled in the back of his car.  It's always interesting in a Walmart parking lot!!

It's Friday on a BIG 3-day weekend before kids here start back to school, so I imagine the traffic today will be a little worse.  I think I'll have shoulders of steel before we hit Pennsylvania!!

Posted by Nancy Kissack at 4:24 AM