This is HALF of the Big Chicken Barn ... aptly named, since it really used to be a big chicken barn where they raised chickens for meat.  Three stories tall, the gentleman inside said it held 80,000 chickens.  The entire first floor is now antiques and the second floor antique and rare books ... along with some not-so-rare!!  Luckily for us they not only cleaned out the coop, but reinforced the floors!! 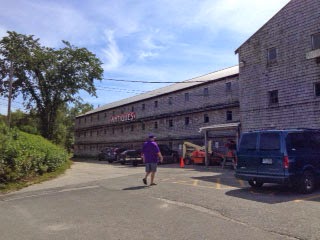 Barbara found the first treasure ... this big bug bootjack will serve two purposes ... door stop AND bootjack!!  For an additional $4.00 I got a hangar for my bird house which you will see below.  They had tons of neat stuff, but we all know that not much fits in an RV, especially one that is already pretty full!! 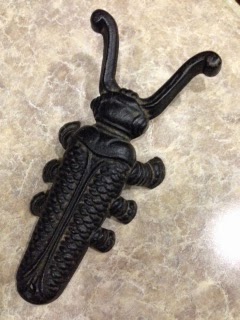 We passed Lobster Restaurants right and left before stopping in at Luni's Lobster Pound on Route 3 in Trenton.  If the parking lot is packed, it must be good!!  This time we got a REAL lobster roll packed with meat that was mighty tasty ... as were the onion rings!!  Barbara had clam chowder that she raved about.  The down side is what you see here was a $20 lunch.  Savor those little lobster chunks, because they are about $1.00 each!!!! 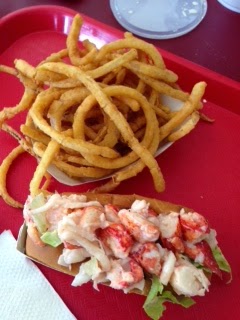 To add to my growing population of house pets that I don't have to feed, is Claws the Lobster in his green hoodie, looking like he's ready to punch someone. 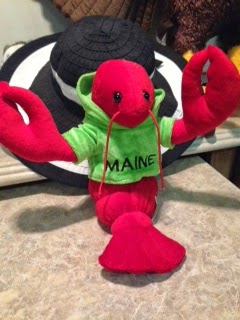 On to Bar Harbor for the day!!  It really wasn't too busy since the weekend crowd hadn't showed up yet and no cruise ships were in.  This is the end of Main Street that winds up in the water.  I think we were there 3-4 hours, didn't even put a dent in the stores or go near the water. 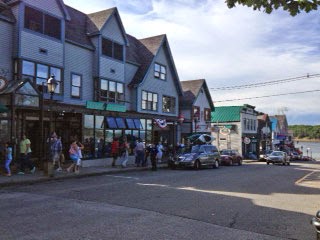 It looks like you could just drive right into the bay, but there is a boat dock to stop you.  Bah Harbah, as the locals pronounce it, is a beautiful little touristy town, once the destination of the rich and famous snowbirds!!  Although there were several empty buildings, it appears to be making a comeback! 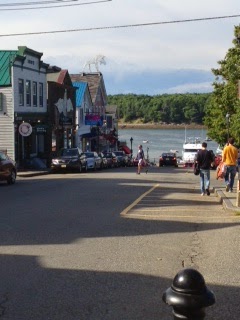 Our first sight ... and our first stop ... was the ice cream-fudge-candy-gelato store on the corner of Main and Cottage.  Just look for the giant lobster holding an ice cream!  This is a medium peanut butter cup ice cream that was so big I had to dump it in a cup.  Yummy!!!  I was photo-bombed by Tom's blueberry that he said tasted more like blueberries than the REAL thing!! 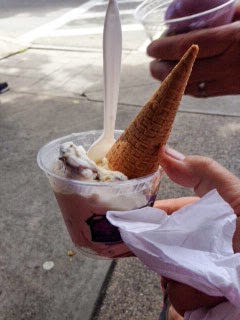 This little guy was so darn cute and was being SOOOO good that I just had to take his picture.   That is until someone reached down to pet him and he came unglued!!  What a cutie patootie! 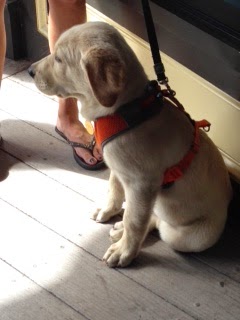 With so many cute shops full of "stuff", we all picked up little things here and there.  This felted fish bird house just screamed my name, so he came home with me.  Cooper hasn't quit barking since I came in the rig.  He seems to think it's his new play toy!! 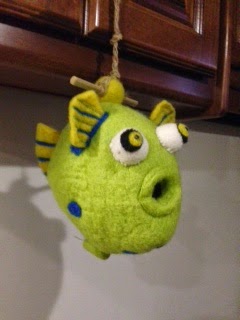 Since I couldn't decide which one I liked best, I bought BOTH!  I'm looking at making felt hats, so this just might be the perfect starter project!! 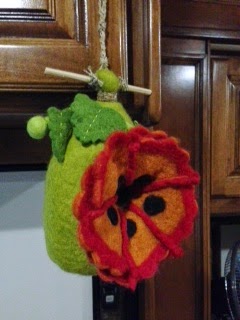 I had forgotten about the jacket I wanted to get on Mackinac Island until Tom saw it in a shop here.  It's reversible (soft and fuzzy inside), waterproof, windproof and has a removable hood and adjustable waist, all for $24.99.  It's such a nice jacket, Tom bought one in dark blue!! 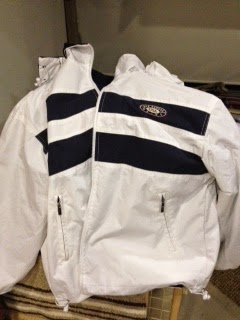 I forgot to show you these two the other day ... the hat has a bendable brim and the green sea dragon is ..... well, a green sea dragon!!  He took up residence along with my possum, eagle, pack rat, skunk and lobster!!  What a menagerie!! 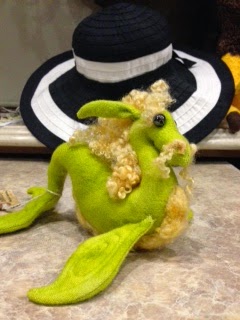 About 5:00 we packed up our goodies and started back towards home.  Tom had been craving some Chinese Food, so we googled a place called China Hill.  Although it didn't have a great rating, the parking lot was pretty full, which accounts for a lot.  Barbara and Tom said the $13.50 buffet was good, I just ordered their China Hill fried rice ... which was excellent.  The service was good too, except the waitress forgot Barbara's chopsticks ... which she apologized for when she remembered.  All in all, a good place to eat and a nice end to a GREAT day!!

Today Bangor is having their American Folk Festival, with international music, dancing, food and crafts down on the wharf.  I'll try to get a few more pictures of the wharf this time!!

Posted by Nancy Kissack at 4:14 AM